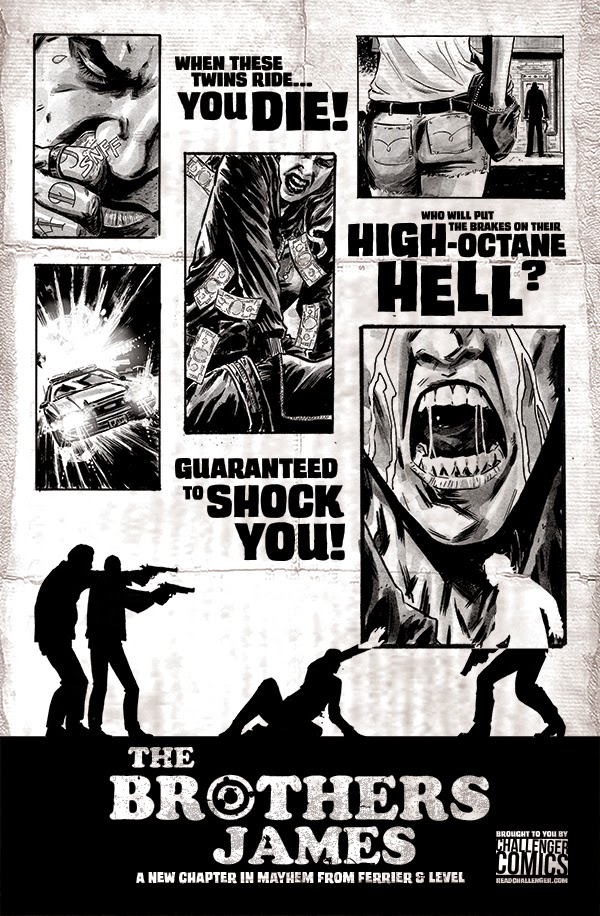 Having in my early years been a Catholic boarding school boy the title Brothers James had me cold with memories of Catholic Brothers and corporal punishment. This book is not that (apologies for a rather confusing introduction). But if Brother Lawrence turned up with a shotgun over his shoulder and hell behind him in issue 1 of this particular book I wouldn't be too surprised.

OK.
Back on track.


'The Brothers James' is a book of violence sure but set in an altogether different but just as scary world. Its a revenge story that's raw and bloody. It's the baby of Brian Level who as well as art duties on this book for Challenge Comics works as an inker for Valiant and Image Comics and writer Ryan Ferrier who has some really interesting work at Monkeybrain and beyond. The art on the first issue and covers was by the currently super hot artist Michael Walsh who is currently drawing Marvel's 'Secret Avengers' (along with other projects).
Issue 4 (the penultimate issue of the five issue run) is about to be released but I urge you to pick up 1-3 and catch up. The term 'modern western' is often overused but this series sums up that definition perfectly.

It's the tale of two brothers who are on a bloody and violent mission to avenge the death of their parents.  They have a list of targets to kill and they travel through the US looking for and killing these men. We get quite a few twists and turns along the road and I have been lucky enough to see a preview copy of issue number 4 and it's going to seriously mess with your melons! No spoilers but the brothers get a companion who may or may not be good for them, I'll let you wait and find out. 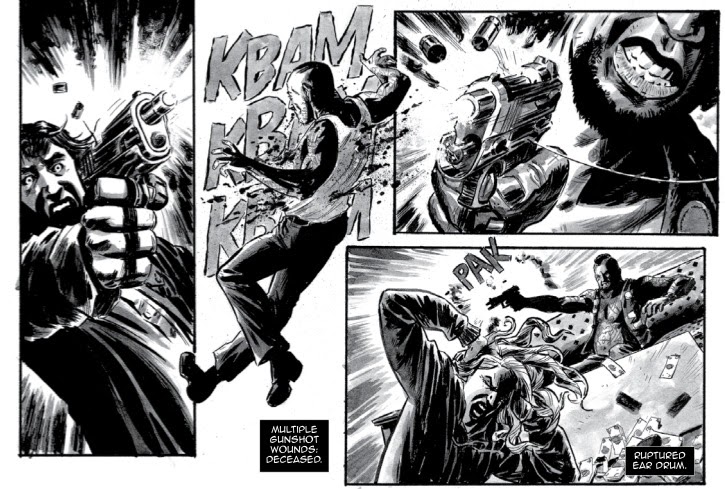 You can see the noir influences and Level's style reminds me of artists like Gabriel Hardman and Michael Lark (who he works with on 'Lazarus' at Image Comics). It has that feel of the sadly gone but not forgotten 'Vertigo Crime' series from a few years ago. The change from Michael Walsh to Brian after issue number 1 is seamless and seems thoroughly natural. The art is gloriously grey toned and has that open line classic pulpy noir vibe. Having missed the ship on issue 1 and only catching up now I shall be actively seeking anything out by these two creators at the earliest opportunity.

'Who will put the brakes on their High-Octane Hell'.

I am actually kicking myself for not seeing Level's work before as it is solidly up my street in tone and style.

Akin to Lark and Hardman the pages move really well. Reactions and physical turns are fluid and resolve naturalistically within the pacing of the book. It's joyous in its bloody relentlessness. It's violent and gun crazy but seeks the repercussion of actions as the narrative unfolds. It's a splendid mash up of Biker Movies, 'Death Wish', 'Southern Bastards', 'Boondocks Saints', Richard Stark and Donald Westlake novels, 'Natural Born Killers' and 'From Dusk 'Til Dawn'. It makes no excuses and is a book that has a clear sense of its own tone and sticks to it. It's gritty and unforgiving at moments but because of this it has true edge. It has a really interesting structure and makes intriguing use of panels to elaborate and comment on the action. Genuinely a masterclass. I absolutely loved this book!
In fact issue one's opening scene in the diner with the quiet before the bullet storm seems like a homage to the Honey Bunny/Pulp Fiction closer/opener of that particular movie. The dialogue is crisp and (here's that adjective again) cool throughout. The two brothers are recklessly violent and intent on completing their mission but they are also fully formed individuals. The impetuous one and the more thoughtful one ('I sense trouble ahead?' I felt myself feeling at almost every page turn.) This will make a great collection for a shelf when finished.

This irrefutably Grindhouse inspired book had me hooked from page one. As a comics reader of some forty years it's always great to find that book that blows your staples off and this is that good. Is there redemption? How will it conclude? The ending is bound to be both cool (yep) and lead ridden. I have had a peek and it's gonna be messy (is my educated guess). 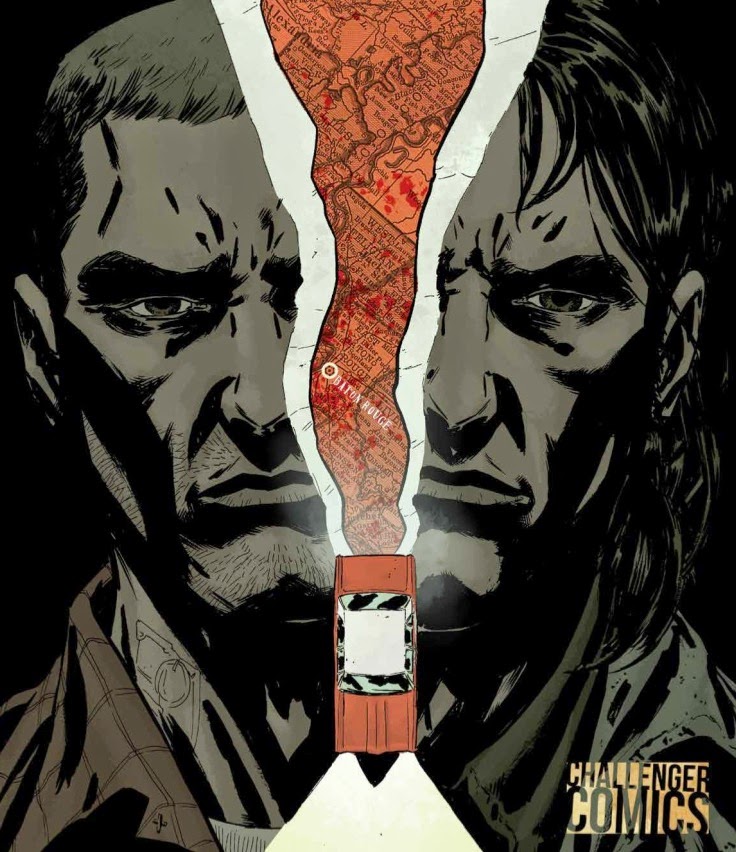 Ryan is the writer of 'D4VE' for Monkeybrain Comics as well as a host of other really interesting books.  He can be found on Twitter @ryanwriter and at his tumblr page referrer.tumblr.com

You can find Brian on Twitter @brian_level or at his blog www.brianlevelart.wordpress.com It's well worth a visit and he has posted some awesome commissions that are well worth a look. ('The Maxx' page being a personal favourite).

Michael Walsh can be found on Twitter @Mister_Walsh and at his own tumblr page mister wallah.tumblr.com

Challengers Comics can be found at www.readchallenger.com and the book has it's own site www.brothersjames.com where you can get your hands on this gritty nugget.

You can find my other reviews and interviews in the comic section on here or over at my blog www.neverironanything.blogspot.com Let me know what you think or pop over to @Ezohyez on Twitter and say hi. (Or you can have detention and a week of early Mass!)