Have you seen Dredd yet?  I saw it a couple of weeks ago (yes it came out early in the UK) and loved it.  It washed away memories of the Stallone movie and left me wanting more.

Straight after I found a central London late night book shop and bought a copy of Judge Dredd: The Complete Case Files Book 10 and I read most of it that very night and thoroughly enjoyed it.

So.  I thought I might try 2000AD again. I used to read it as a kid in the late 1970s and early 1980s and loved it back then. I would guess that it's around ten years since I last tried it.  I wasn't  overly impressed then but thought it was worth an experiment.

So I have ordered a month's worth of issues from my LCS and thought I would let you know what I thought. 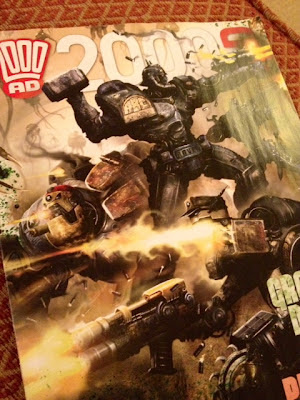 The cover looks pretty good (actually a wrap around cover) by Clint Langley. I usually don't like this overly painty /computer style but thought it worked OK this time round.

Upon opening the book I see that Tharg is still there spouting juvenile cliche. I have to admit to always finding him a bit annoying even in the 1970s. His appearance to me smacks of old British comics (a time we have left behind with the older readership perhaps?)  The summary section smells suspiciously of a cut and paste job.  (Do people read this page any more?)

Judge Dredd - Payback.
I loved this story.  Exactly why I went back to the book. PJ Holden killed it on the art and it's a tight well written story with just the right balance of story, character and exposition.  I have not got a fucking clue who most of the participants are but it leaves me wanting to know more. 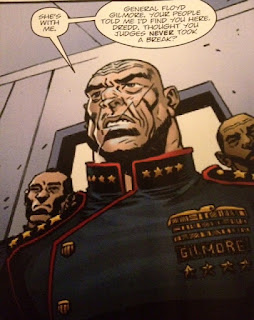 Brass Sun - Part Two.
No sorry.  I don't get this at all.  The art seems rushed and lacks detail (yes I do include that lazy splash page).  I have no clue what is happening and don't really fancy finding out.  Just hope that it finishes soon and we get something better. 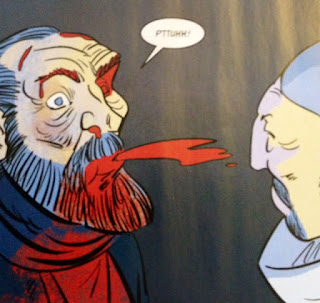 The ABC Warriors.
I have always been a big fan of the characters since Ro-Busters and really liked this story. The grey splash page looks great. It has that humour / menace / bleak feel that the old ABC stories had and the cliff hanger works well.  Let's face it Mr Mills is still the man.  Anyone know, is Deadlock still Nemesis?  Is that still a thing? 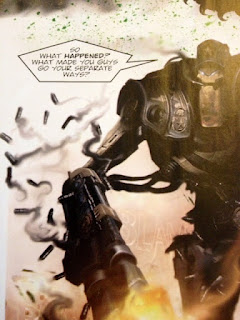 Terror tales - Blackspot.
Now you lot. Listen. I just watched Xtro and this first two and a half pages of 'Blackspot' is straight out of that movie.  The ending is weak and it actually had me looking back a couple of times to see if I had missed something. The art is very readable however but the grey colouring (to show night time presumably) seems a little flat. I like these one off stories normally so hopefully there will be more of them with better scripts. 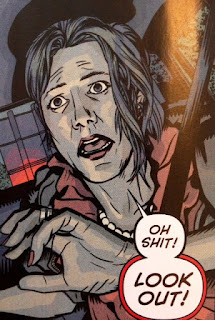 Grey Area - This Island Earth (Part 2).
Seriously? Is that it? A sub 'Powers' strip seems to focus around a lost car? Was this story written for a different (and much longer) format?  I am guessing that it's a computer game spin off? Is that right? The art is workmanlike but is so traced in points that it took me right out of the story. Again another strip that I hope gets replaced soon. 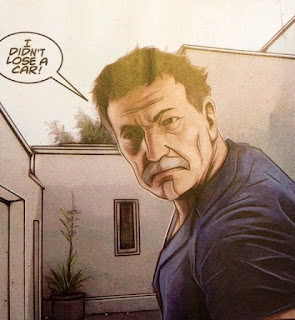