Never Insightful and only ever Inciting! Rant Ahoy.

I wrote recently in reply to a friend ‘I write for myself’. I made it out like it was some ying-yang-yonkey quote but it wasn’t. It was just some of the normal grumpy crap that I come up with most hours.

I’m not writing anything that doesn’t both contain part of me and also is done with something that I feel is my own ‘style’. Why should I write anything otherwise? Whore myself out to some intellectual property or publisher who wants me to write something I neither feel anything for or agree with.

I seek neither popularity or fame.

Genuinely. Neither interests me.

Where is this going other than me blowing my own trumpet (if only!)

The recent fart inducing Oscars Ceremony is maybe what was my own personal tipping point but it’s been on my mind in and around comics for a few years now.

We’ve recently seen some Small Press comics awards handed out. End of the year ‘Best Of’ lists and the like. Everyone is doing one seemingly. On the Awesome Comics Pod we are careful to say that this is a list of our favourites. Who out there could claim to have read everything and so make a ‘Best Of’ valid? Not me and I read multiple comics every day.

Let’s ponder if these winners and short listed comics or graphic novels deserve the applauds they are receiving. It seemingly only takes one person to say that something is ‘inspirational’ or ‘incredible’ or ‘feminist’ for everyone to jump on board the oral pleasure giving train as it leaves the station for Awards Town.

It’s such a small pool of choice and voters that it’s relevance makes it totally irrelevant. A number of readers and their mums pointed at a website and told to vote doesn’t make a ‘Best Comic of 2018’!

Giving an art form over to the plebeian masses seems like a mistake too.

So who runs these comics awards? Sometimes it’s one or two people from a website or organisation that for the rest of the year is wholly ignored. How do you make yourself popular? You hear them biting their nails in their blogpost wankatariums.....

‘I know! Let’s run an award!’ The idea comes to them like a problem solved by mathematician in a bathtub.

‘Oh?! Flaps.com is running an award? I’ll get in on that action and it’ll give me the chance to promote my ‘brand’. (Said everyone on the internet).

You see people posting links for articles on websites they wouldn’t consider reading otherwise and won’t return to. Awards they’ve slagged off for years but now with a sniff of a present like a home for a starving dog they’ll jump the leg of that organisation to get something, anything.

Let’s face it, loads of these books are derivative bollocks. Often parading themselves around Waitrose like their farts smell of roses and they have a thought in their heads that resembles something close to originality. I’ve seen some unboundless twattery get awards in the last few years. It breaks my heart every time our medium is cheapened like this! People who can neither draw nor write winning awards due to their shouting ‘Look at this, LOOK AT THIS’ in various shameless ways.

One way seems to be by claiming your work is worthy in some way? Lifting it above the people who create without fanfare. Or just constantly, constantly, constantly telling you how great they are with shallow and stained platitudes! Vomit inducing comments about how worthy they and their graphic novels are and how people should look up and worship their unbridled brilliance as they squeeze a peanut littered shit onto your faces. I’ve seen some attention seeking crap in my time but this makes Holly Hagan look positively a hermit.

But...... We are the suckers for taking part in this attention seeking shambles!

We are the mugs.

Fuck everyone else. Make comics. Enjoy comics. Shout about them. But they ain’t and should never be an avenue for fame and fortune. (Let’s face it the money ain’t really there anymore anyway so what are you left with?) As with everything seemingly on the internet the ‘Look at Me’ generation is bending us over daily.

Pull your trousers up and have some fucking respect for yourself!

I have to admit that there are whole swathes of reviewers and sites that if they understood what I was writing about I would be mortified.

Not jealousy, not envy, just truth.

If you don’t understand what I am talking about you are either deluding yourselves or ..............

That gangsta Mr Stuart McCune sent me a care package from Italy! 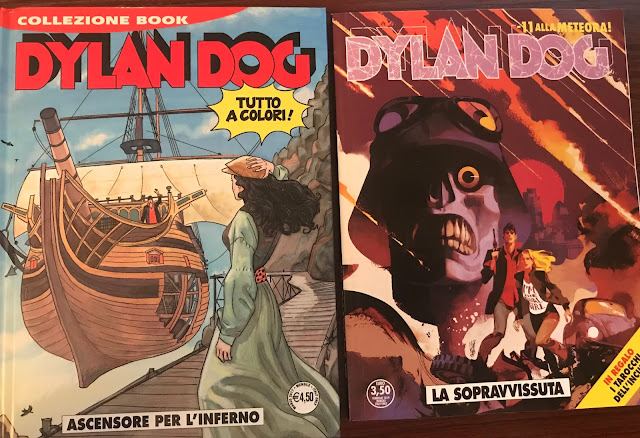 Along with Dylan Dog #389 (on the left above) was another batch of gorgeous cards. Since we don't really get them over in the UK or USA it would be worth showing comic art fans what they are all about.

Just have a look at these beauties. 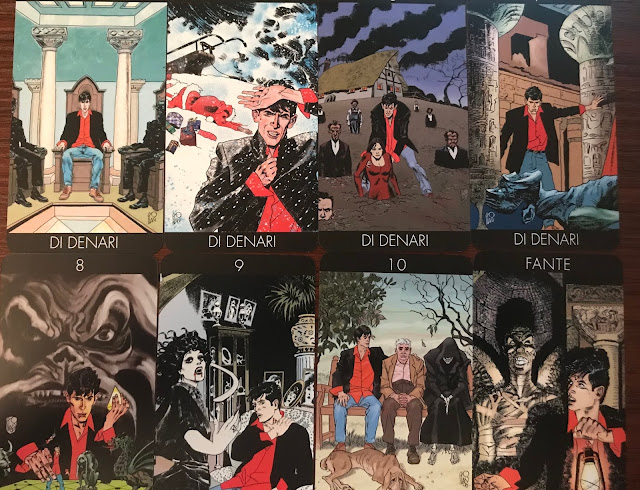 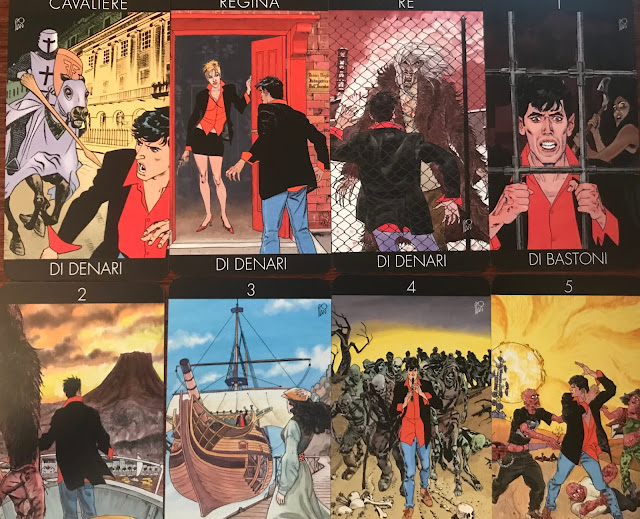 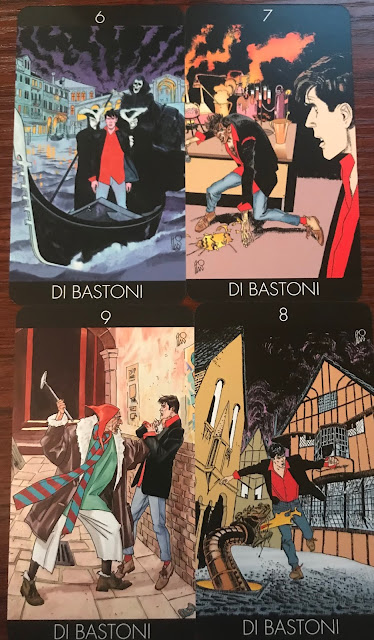 Now someone needs to pull their fingers out and get this great series translated!

Hey folks! Apologies for the radio silence in the last couple of weeks.  Don’t worry I’m still alive.
It’s been a busy couple of weeks on the comics front.
We had a great launch of issue four of Awesome Comics and ‘How to Make Comics with Springworth’ at True Believers on the 2nd of February. They both went down a storm and we’ve been getting some great feedback from parents and kids who have thrown themselves into drawing Punchy and his pals.
Here’s the link to buy yourself some Springworth from Waterstones! https://www.waterstones.com/book/how-to-make-comics-with-springworth/andy-hanks/tony-esmond/9781916488601
You can also head over to the Little Heroes website and grab a copy there https://fairsparkbooks.co.uk/product-category/series/how-to-make-comics
Shhh but it’s a secret but myself and Andy Hanks have started working on something new so watch this space. I’m busy plotting it right now. 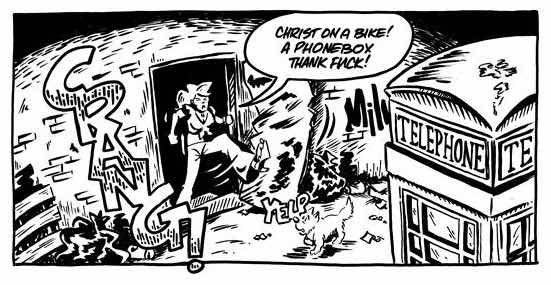 It also goes without saying that you’ll also need a copy of the new Awesome Comic. Issue number 4 rounds out the three stories and we have had a ball producing this series. There may even, possibly, be something else in the pipe (ain’t that right Mr Cumber?). So head over to our store and grab a copy https://awesomecomicpod.bigcartel.com/
In other news I’ve been to Spain visiting Pat and Lisa Mills as part of a retirement present to myself. It’s been a blast and they have looked after me and hours have been spent shooting the breeze over an awful lot of red wine.
Here are a couple of pictures of Pat with some familiar comics. He was kind enough to do this and proof if it was ever needed what a gent he is! If all goes to plan we’ll have a short interview for the pod with some of his exciting new plans. 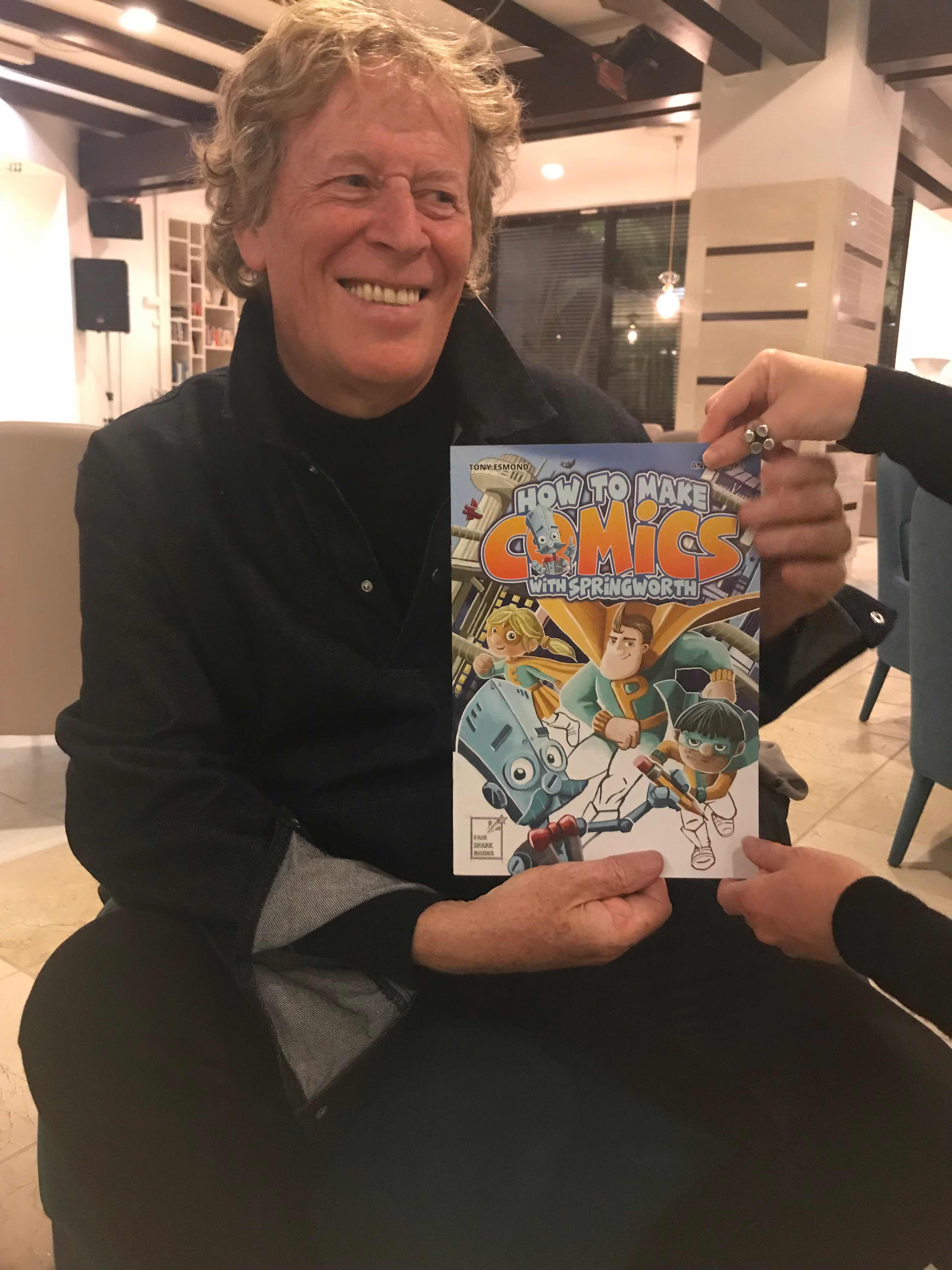 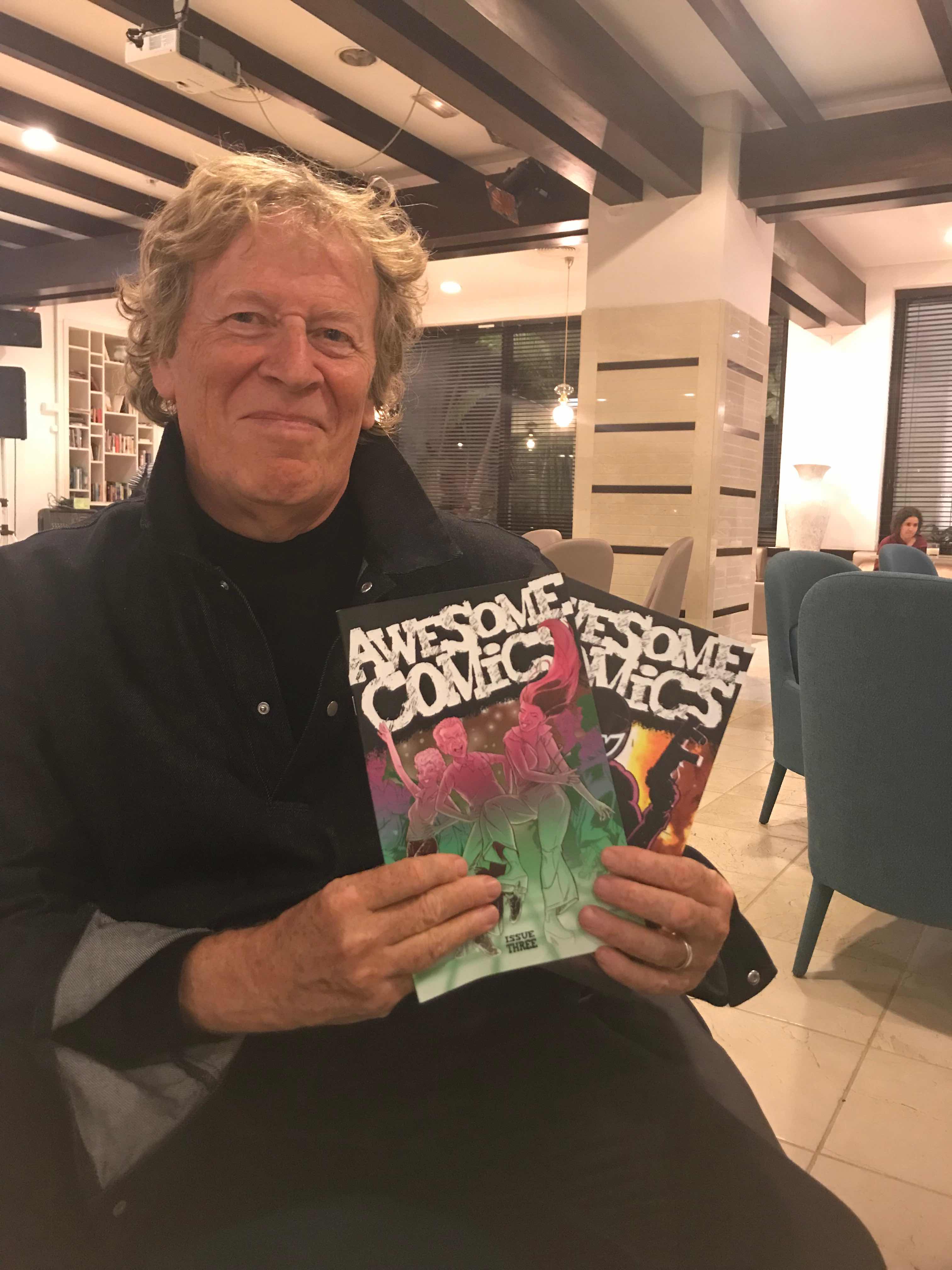 Pat is running a series of articles called ‘Storyteller’ that break down the comics creation process and are like crack to fans of writing like myself. They are highly recommended and you can find them here https://www.millsverse.com/


Here is also a photo of the office for the week! 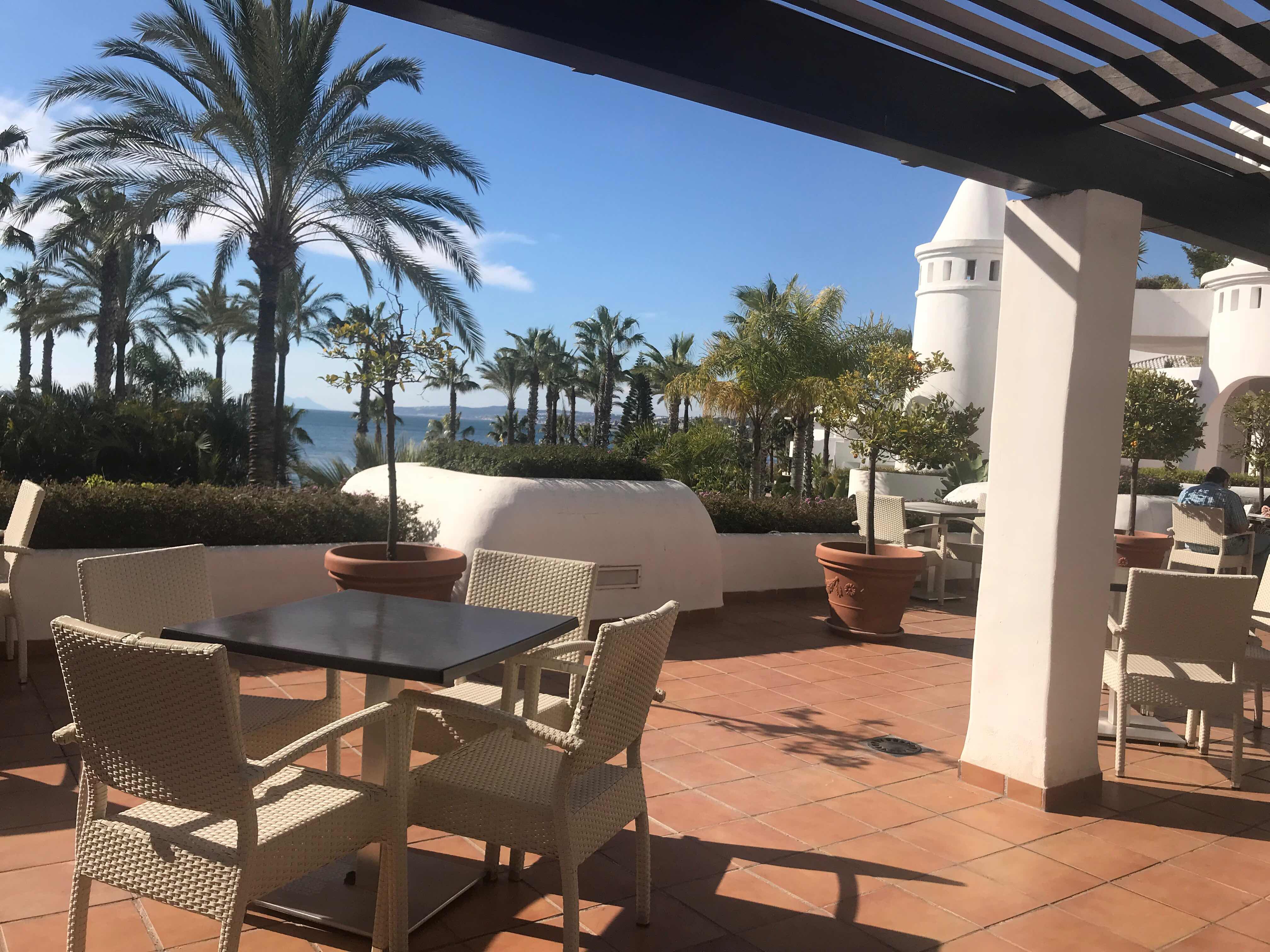 So...fuck you all, I’m off to write about a brave robot, a strange movie star, a prostitute (obviously) and read some more comics.