I am like a child every time this happens.
There has never been a better time for comics and the guys at Dynamite Comics and especially Comic Club and great pal Marc Laming is the reason! 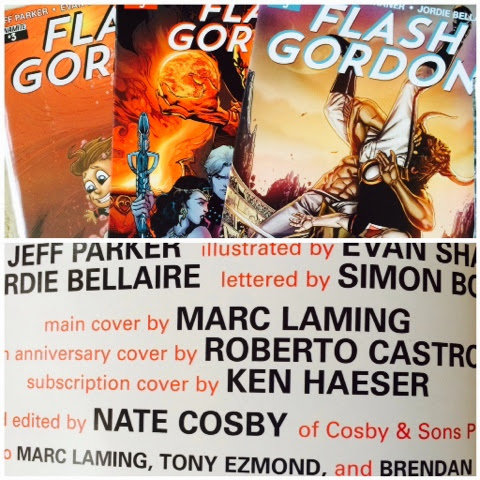 One of the stalwarts of our local Comic Club is the excellent artist and creator Matt Harower.
He surprised me today with this awesomely good Ant Man commission.
Here's a photo of the artist himself with the page! 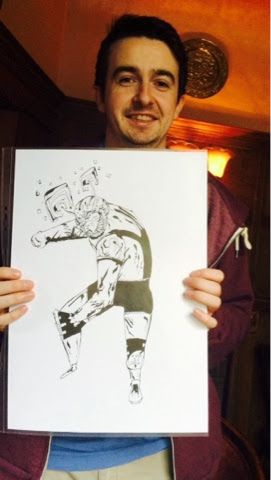 Look him up on Twitter @hp_matt or at his art blog www.hpmatt.blogspot.com
I can't wait to see his comic The Big Couch out soon!
You can also meet him and a load of other creators at Chaos City Comics in St Albans on the 12th of July from 2pm onwards. Other guests include Dave 'Watchmen' Gibbons, Marc 'All New Invaders' Laming, Christian 'Briar' Wildgoose and Monty 'Death Sentence' Nero.
Pop down 'cos it's gonna be a blast!
NIA.
Posted by Tony Ez Esmond at 08:18 No comments:

I think I am done with Kickstarter.
All the projects I have helped fund have been late or undelivered.
Every single project has been something I have regretted helping later on.
Some of these projects I have even helped promote with interviews and reviews!
In one case it was actually much more expensive to back the book than just buy it from a shop. This particular book has now been bought off the shelf by all my mates and I still don't have it (months later).
Yet my mailbox remains empty.
I think this is a common problem. I recently vented this on Twitter and got a lot of replies from comics and movie fans alike.
Isn't it about time that Kickstarter themselves started a money back option if the title is well past it's supply date? That might give some of these lazy and/or greedy people a kick is the backside?
Since I am trying to be polite I won't name the creators but I am sure they know who they are.
It's a shame because in principle it's a great idea and there have been some great projects but I think people just go 'let's do a Kickstarter' without fully considering the problems that may ensue.
I would love to hear what you think. Let me know on here or @Ezohyez on Twitter.
All the best.
NIA.
Posted by Tony Ez Esmond at 03:49 No comments:

I have just reviewed the excellent House Party by Rachael Smith.
You can have a look at said review over at www.beardrock.com but here is a teaser. 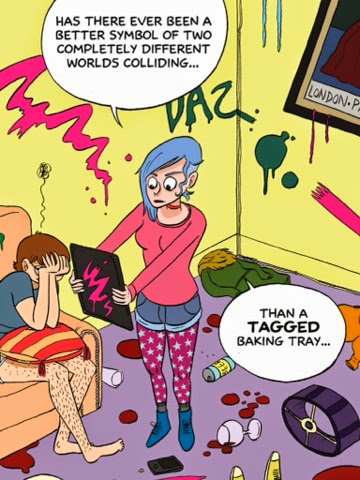 Panel of the day.

Pop over to http://beardrock.com/eyebrow-art/comics/review-days-simon-moreton for a review of the excellent 'Days' from Simon Moreton and published by Avery Hill.

This event is really shaping up!

Pop over to http://beardrock.com/eyebrow-art/comics/review-squatters for a review of a new horror comic. 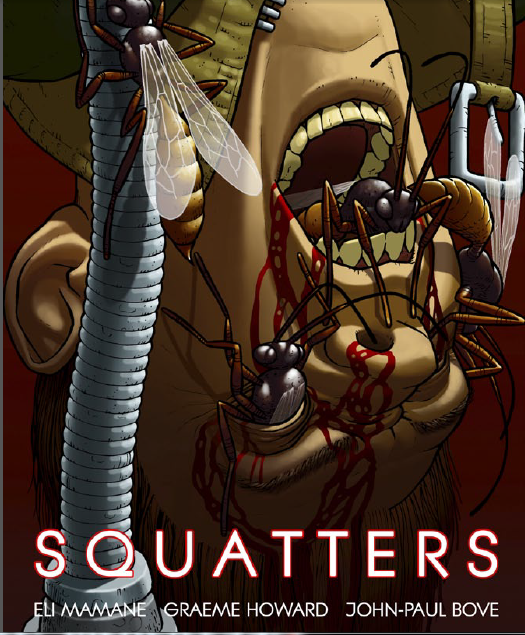 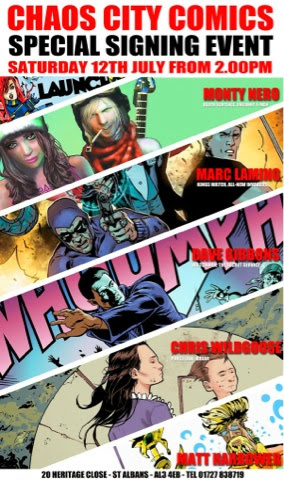 In the comics fandom world it's important not to be left out.
When all the action is going on around you don't be that one doofus who is missing all the fun!
So. Don't miss out on the awesome signing at Chaos City Comics, Heritage Close, St Albans, AL3 4EB in the UK on Saturday the 12th of July 2014 from 2pm onwards. (A convenient 25 minute train journey from Central London).
That's right. In just over a month the best comic shop in the area will be holding a signing of not just one but five comics creators.
Comics legend and all round gentleman Dave Gibbons will be signing copies of all his work and possibly adding the odd sketch here and there too.
Chaos City is Dave's local shop and he's always happy to share stories and chat to fans. Anyone who has had the opportunity to spend some time with him will know how entertaining he can be. It's all gold folks. 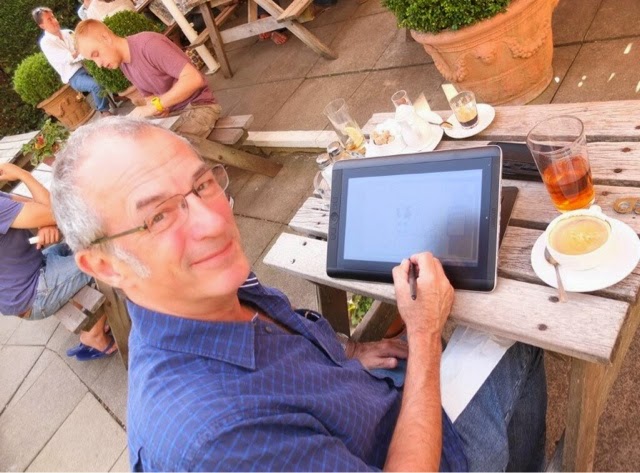 Next up is the newest and hottest artist that Marvel have added to their roster. Marc Laming has worked for DC, Dynamite and Boom Studios to name a few companies but is about to release his first Marvel work in the 'Original Sin' story arc at Marvel Comics.
Seriously folks. This art is gonna blow your fucking socks off. Working currently on The All New Invaders with writer James Robinson his art is a masterclass in form, action and character.
Also as a founder of the now world famous St Albans Comic Club this guys art has to be seen to be believed. Pop along and see him at work. Just don't ask him what a Nubian is? 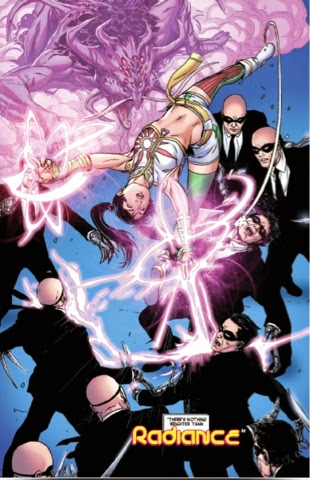 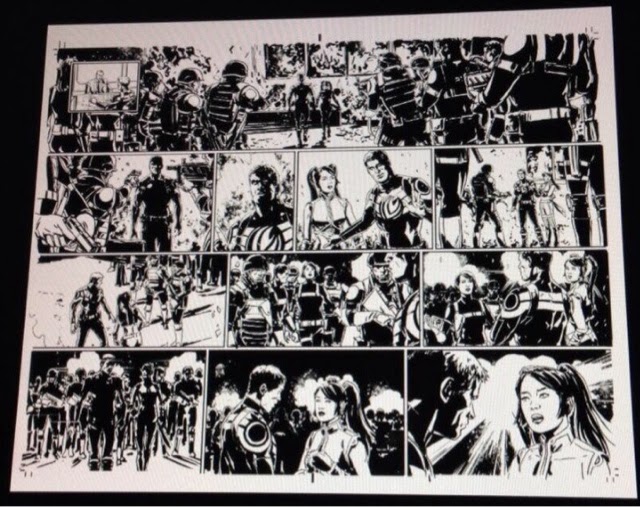 Next up is another up and coming talent who has recently got a well deserved foot on the door at Marvel. Monty Nero is the writer of 'Death Sentence' released from Titan Booksand previously serialised in the much missed 'Clint Magazine'.
The shop is very excited to get Monty all the way from bonny Scotland and it's just in time for you to get him to sign both the upcoming Death Sentence hardback and the just released Amazing X-Men annual. Get them while they are hot! 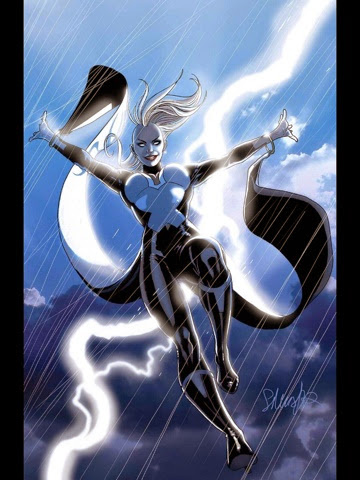 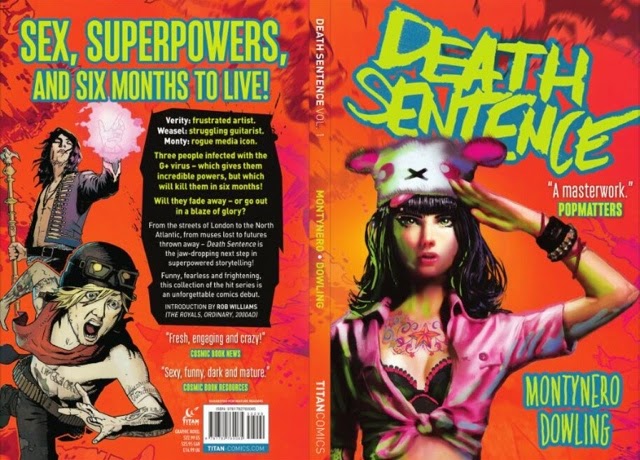 Next up is an artist who produced one of the most beautiful and different books I have seen in many, many years. I saw 'Porcelain' by Christian Wildgoose at the first Kapow Comic Convention around three years ago and was blown away by the detailed artwork. His storytelling flows like a great symphony and is packed full of character and style.
Christian has also worked on the True Grit comic, Into The Dark (with Rachel Deering), 'Briar' and is currently working on the second volume of Porcelain. Pop down and get something signed before this geezer gets snatched up by the big two and his exquisite artwork sky rockets in price. (I've already snagged a couple of pieces myself!) 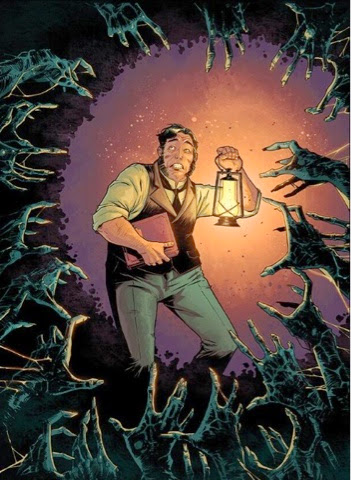 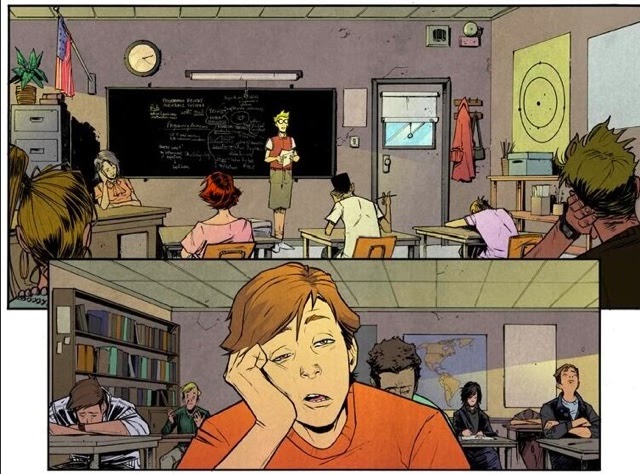 Next up is possibly one of the most original and interesting artists I have seen in years. Mathew Harrower has work that glows from the page out. Just breaking into the comics field with his upcoming comic The Big Couch he has heavy Kirby and Jim Mahfood influences.
Packed full of bold, brave, dramatic action his work creeps into your subconscious and takes over. There's no doubting the fact that Matt just gets it. He has a grasp of the trade of storytelling and combines manga and western comics influences into explosive images and stories. 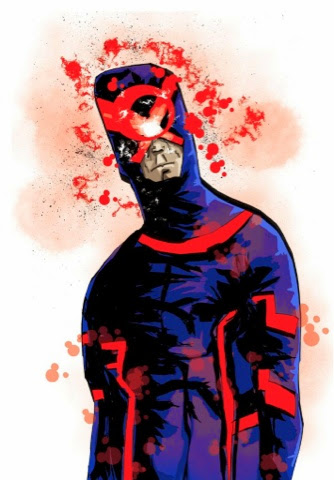 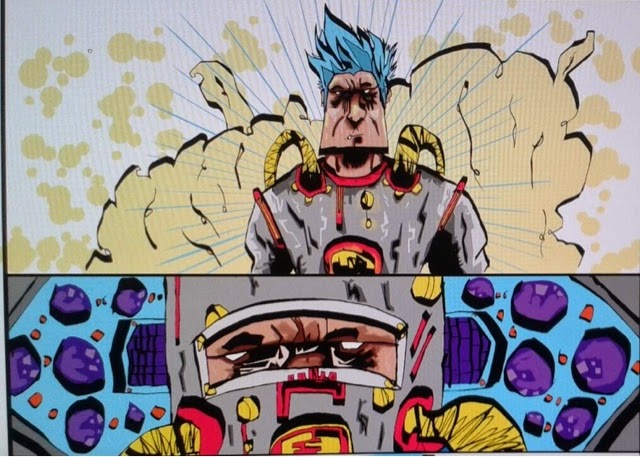 So make sure you put the 12th of July in your diaries (1pm onwards) for a great signing and sketching event.
The St Albans Comic Club will be there too and there is a better than reasonable chance that beer may be consumed after (and possibly before).
If you fancy contacting me I can be found on Twitter under @Ezohyez or I write and edit the comics section over at www.beardrock.com so pop over and catch up.
NIA.
Posted by Tony Ez Esmond at 02:12 No comments: 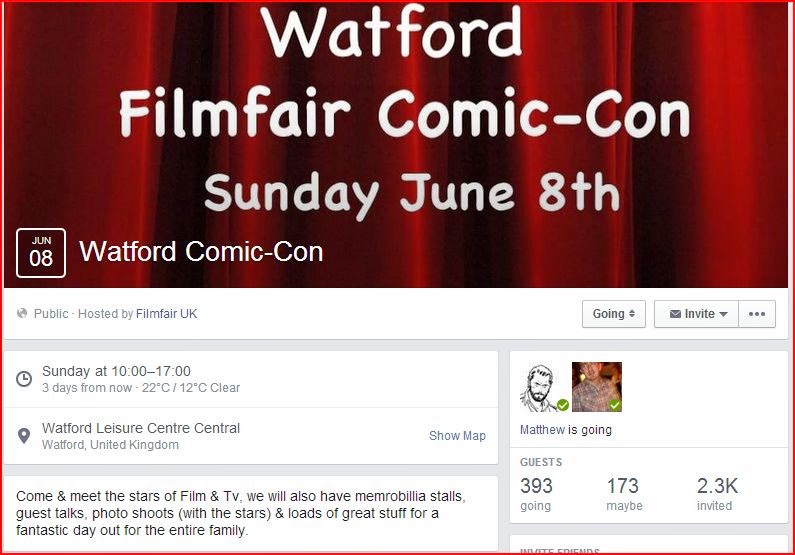 The above is the Facebook page for the Watford Filmfair Comic-Con.

I am not far from Watford and thought 'great a local Comic Con'.

But hang on. No actual comics mentioned in their Facebook description.

So I messaged them on Facebook asking what Comics people they had attending. All their page showed was some Star Wars/Doctor Who/Torchwood (etc) actors and some TV/Comedy actors. 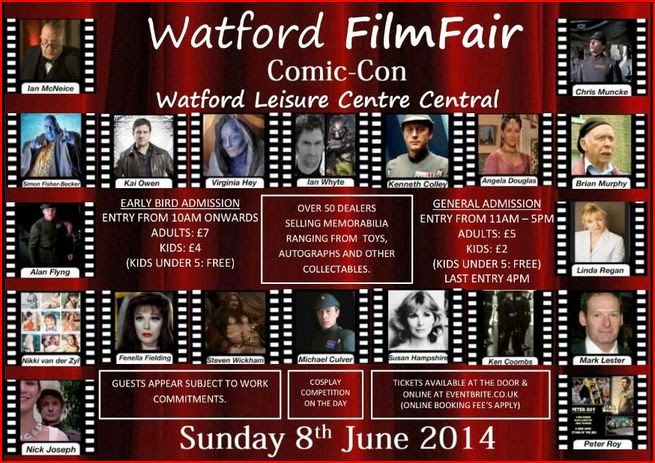 Still didn't get a reply so I tried again on the 4th of June.

Still no reply (although I noticed that they had been active on Twitter between messages).

So I joined the Facebook page and sent another message today (writing on their actual wall). 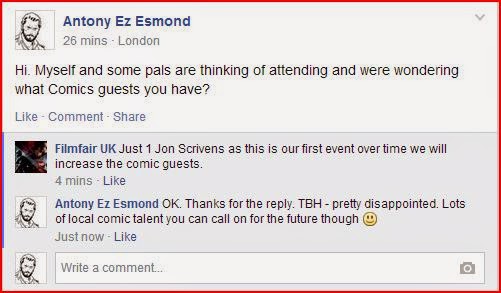 I thought. 'Why are they calling it a 'Comic Con' when they only have one comics guest (who seems to have joined the party quite late)?'

I'm sure Jon Scrivens is a nice guy but there are plenty of big comics names in the area who I am sure would have attended - had they been asked.

But I thought 'be nice'. Send them a reasoned answer with a smiley faced hope for the future. (see above).

Being a bit suspicious of the site I also thought I would take a crafty snip of their reply. I'm glad that I did because I went back five minutes later to see that they had deleted it.

If you have a look at my Twitter feed, Facebook page or blog you will see that I am behind comics 150% all day and every day.

But describing an event as a 'Comic Con' when you have one Small Press guy and (from what I can see on their Twitter / Facebook pages) not a lot of comics is bordering on false advertising at the very least.

There are loads of Small Press, Indie and professional comics outfits who would love the exposure at something like this. There are also loads of comics fans in the area who might go along having seen the title alone.

All I will say is 'Buyer Beware'.

Hopefully one day they will have some comics at their 'Comic Con' (as promised).