I was lucky to get sent a pre-release copy of this title by the writer Jay Faerber. I have admired Jay’s work for some time now and loved his Noble Causes series. He mixes great personal moments with super hero action in his work as a stylistic choice that works really well.

This book is currently a digital only book from Monkey Brain Comics and is well worth a look. It follows the hero Paragon who inhabits a city of superheroes and super villains. Paragon seems to be a reliable and heroic figure fighting for justice with a pensive and practical manner. He successfully completes a mission and beats some gangsters up. One of the gangsters is a capo in an organised crime family who follows Paragon and witnesses him unmasking. This criminal decides to keep this discovery to himself and use it to his own benefit. He blackmails Paragon into becoming a costumed villain called Bludgeon. They then conspire (against our hero’s wishes) to steal cash from the very mobsters this capo works for. 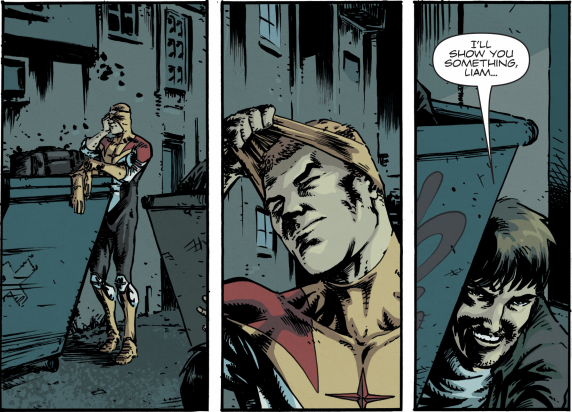 We follow Paragon in his civilian life and watch as his life turns to banality and sadness as this oft times hero meets with his soon to be ex wife to sign some divorce papers he then has to explain this to his kids and then apologise to his boss for being late to work.

Each of these books are priced at 99 cents – exactly how much a digital comic should be in my opinion. The covers evoke pulp crime novels of the 1950s and are striking to the eye.

Mr Faerber works this idea of the manipulated hero logically and with imagination. It all feels real and has that crime noir mixed with regular superheroics feel to it. It reveals to us a little bit of nastiness as the story builds in a masterful fashion. It rattles along speedily and pays attention to character and action in equal measure. The action is handled well and not unnecessarily dragged out and the personal moments (a stand out moment in the signing of the divorce papers) is handled with Faerber’s usual style and care. It has that ‘what if superheroes existed’ exterior with more depth than we usually get. He extrapolates real world problems well in the initial issue and lays it all up for future instalments.

The art is crisp and well coloured. It reminds me a little bit of a book like The Boys or Incorruptible (from the last couple of years in story and style) and we get an almost cartoony feel that counterpoints it’s gritty ironic edge. Nate Stockman uses style (and Little’s colours) to differentiate between the two alter egos. These two costumes reflect current trends in capes and cowls as one is bright and showy whilst the other is dark and armoured. I had not seen Stockman’s art before and you can tell that he is still learning but so far the book looks great and flows well from panel to panel. His storytelling works well for me and it’s an enjoyable ride art wise. He quotes Sal Buscema and John McCrea as major influences and you can see this through the pages of this title. He is straightforward in his action but also with energy. He will be one to watch in days to come. 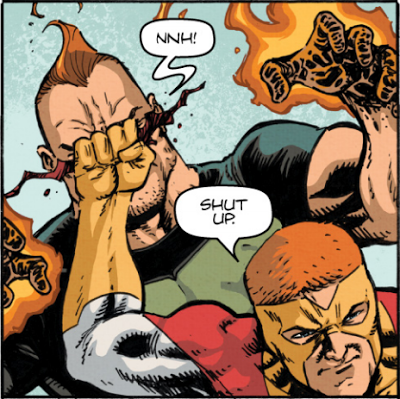 What this book does successfully for me is in making the dilemma the core of the story. We don’t get pages of exposition that lay out the heroes powers or place in a super team or organisation. The main narrative stream is the fact that he is being manipulated successfully by someone who would normally be dealt with in a punchy or kicky moment. This is mixed up with some Stan Lee style grounding of the hero in the regular world with all his regular world problems. One moment he is punching bad guys, then he’s getting a bollocking from his boss, then he is being ordered around by a sleazy con man.

It’s great fun and really wants me to read on into the series. It doesn’t pretend to be anything more than an interesting and fun crime / superhero comic. In keeping to this it’s perfect for these shorter chunks that you can read on your digital device.

Issue one is great vale and is double sized and Faerber hopes to get out ten pages for each following issue. I have to admit to not being a regular digital reader but will try out future issues and have a look at the rest of Monkey Brain’s output.

Anti-Hero issue 1 is released tomorrow (June 26th) through Comixology or direct through the Monkey Brain website. 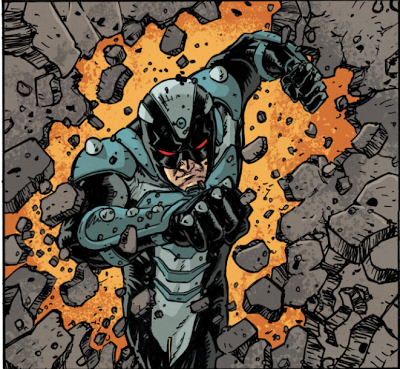