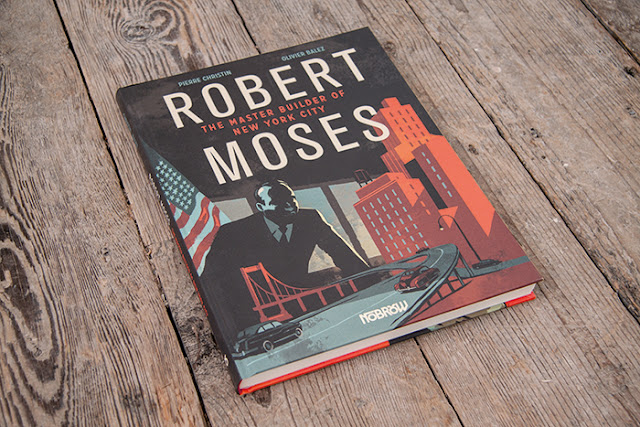 The Story - 'From the streets to the skyscraper, from Wall Street to the Long Island suburbs. Every inch of New York City tells the story of one man's mind: Robert Moses, the 'Master Builder" who designed the modern metropolis.. More influential than presidents of mayors, Moses brokered control of the Big Apple and built a city beyond imagination.' 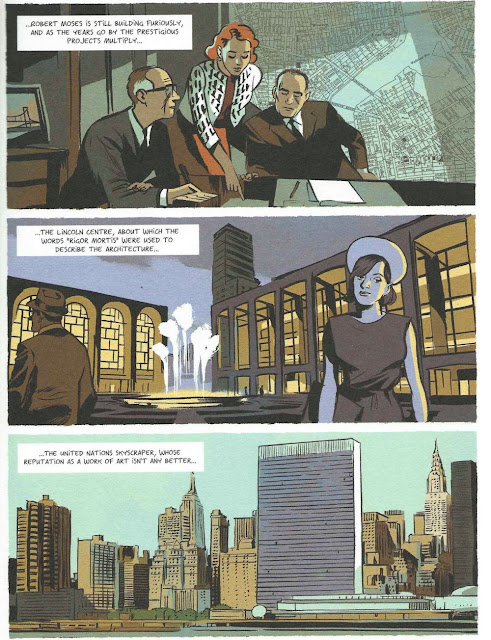 The Review - New York is a city that I and many comics fans hold a great affection for. Through comic books and movies and novels it is a city that we know better than almost any other. It has a personality and a bussle that we feel and know through our nostalgia for the tall buildings, seedy bars, parks with horse drawn carriages and muggings, and most especially water towers. I genuinely find it to be one of the wonders of the modern world in vibe and scale. Seeing a book like this explain and expound on the origins of much of what I and we love in this city is a big part of it's enjoyment.

The book has exactly the same sharply cool art and style of something by the late Darwyn Cooke, full of tailored suits, twin sets and pearls, scotch tumblers, groovy trad jazz, seats at the bar , and so on that we see in works like Cooke's Parker adaptions or in more recent television like Mad Men or Boardwalk Empire. It is a feast of art showing spectacular historical settings with the people and mood to match. 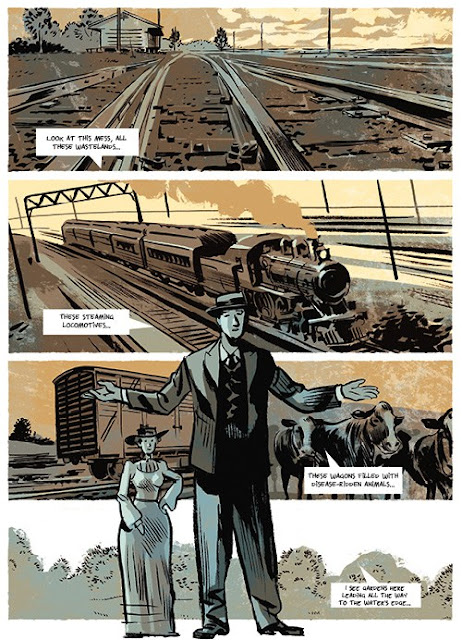 But let's also not forget that this is a lesson in the creation of a city. We follow Robert Moses on his single-minded crusade to build a hub for people and their recreation and jobs and transport and homes that everyone could flourish inside. This book walks you through his upbringing, origins and business dealings throughout his life. It does this by both showing the widescreen cityscapes and maps as well as the discussions, debates, arguments and business deals that go on in a more boardroom or personal one-to-one scenario.

Pierre and Olivier also stray from this path of pure history on the odd occasion to show a pause in the rush-rush of big business. Robert and his friends/colleagues go on a road trip in an open top car and in that moment Pierre proved to me that he could write these characters with a really endearing quality. It works on these differing levels and also has that feel of a Frank Capra movie. Totally cool and delightful all in one graphic novel. 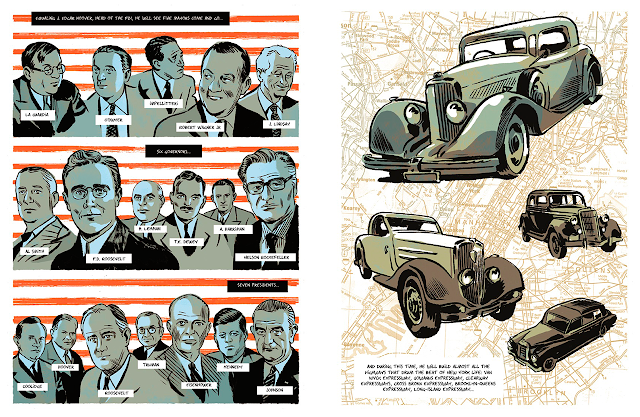 On the odd occasion in my humble opinion Olivier the artist grabs the obvious stock footage of an historical figure and uses it as reference but I think this is fair in a book that leans so heavily on telling the facts. For the rest of the book the art is flawless. I was literally stopped in my tracks by a number of pages, a fact that can be proved by checking out my excited postings on Twitter.

This was originally printed in France under the title of 'Robert Moses, Le Maitre cache de New York.' before getting a translation by Nobrow. This is the softcover treatment and is an absolute steal at only £12.99.

Pierre Christin was born at Saint-Mandé in 1938. In addition to the ongoing Valerian series, Christin has written several other comics oneshots, including The City That Didn’t Exist, The Black Order Brigade and The Hunting Party, all illustrated by Enki Bilal. Among the many European comics artist he has collaborated with are Enki Bilal, Jacques Tardi, Alexis, Raymond Poïvet, Jijé, Annie Goetzinger, Daniel Ceppi, and François Boucq. This is his first collaboration with Olivier Balez.

Olivier Balez is a long-time comics artist and children’s book illustrator who resides in Chile. He has illustrated work in virtually every genre of comics, collaborating with Florence DeCamp, Eric Corbeyran, and Pascale Fonteneau, among many others.