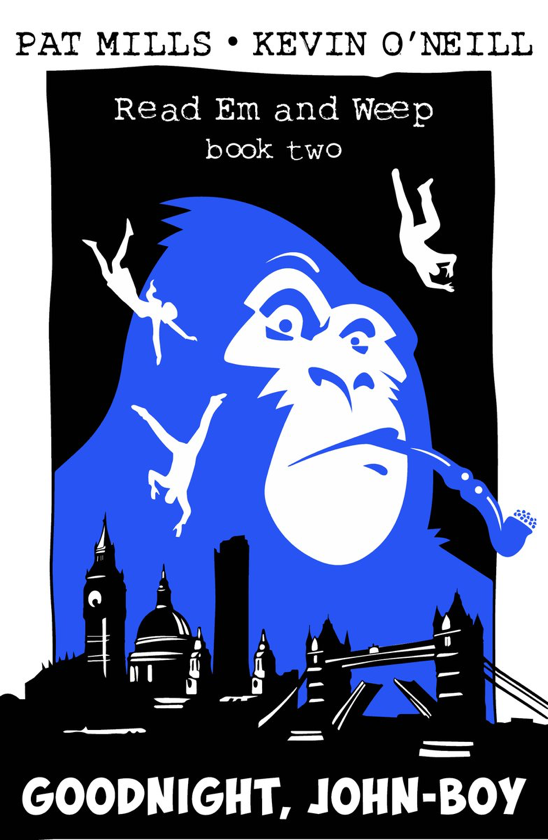 Available through Amazon on Kindle and Paperback.

The Story - ‘The Geek Detective is back! Now comic book editor and armchair serial killer, Dav Maudling, takes on a Masonic order of Knights in a bid to solve his mother’s murder.

He also has to save kids from the Knights’ Grand Master, depraved TV celebrity and charity fundraiser ‘Fabulous’ Keen, who is getting away with crimes worse than murder. The ‘national treasure’ believes that he is above the law, but he’s not above Dave’s law.

But Dave, the ‘lard-arse assassin’, can’t murder him by proxy like his other victims; he has to face and kill Keen himself. And his ghostly femme fatale mother, a ‘ghost in mink’, is there to help him.’

The Review - This is the second book in a series being self published by the mighty Millsverse. It features a murderer who works in the 1970s London comics publishing world.....

I don’t think that it is completely based on Pat but I have my suspicions....

This is a second book in the run and I have been very much looking forward to reading it as the first book was both a cracking read and also something completely out of the ordinary. This is a series that in many ways mirrors the comics publishing era of the 1970s and manages to twist even that era of permissiveness to further strangeness and quirk. It gloriously flicks the Vs. It constantly traps me into thinking...

Break out the Lionel Blairs, swig a few Baby Chams and hold on!

That’s not to say that everything in the book is all smiles and cups of tea off the hostess trolley. There are murderous intents wandering the back stairs and snugs in smokey London. In the second book Mr Mills fills out the characters by throwing them wholesale back into his world of strange sexual activities, pompous writers, bombastic fictions and yes we have the return of that violent newsagent. Relationships are explored with some unsuspected surprises as well as funnily familiar new creative and financial ventures. But, all the time, murder is on the agenda.

This book lives and breathes the 1970s. I was barely into my teens when the decade ended yet I remember the nicotine stained walls, the carefully combed greasy hair styles, the divide between those that fought in the war and the ignorant youth, the seemingly normalisation of a pinch on the bum at the office party and the heading down the pub for a light and bitter. This is the series that brings it all back.

‘It’s time to Carpet Bum the Hun!’ Is the number one chant in school playgrounds!’

‘Goodnight....’ is also fucking hilarious. This is a dark humour that you don’t see enough of in modern fiction. It is antiestablishment, of it’s time and yet reads with genuine freshness. It gloriously revels in the trends, prejudice, peccadillos and the mood of the time. I smile constantly even at the tiny references to those shite ‘Love Is’ cartoons that at the time made me want to pull my eyeballs out of my nose and the strange popularity of movies like ‘Confessions of a Window Cleaner.’ When the bad taste of modern society is still lingering on the train home this is the book you need to pull out and read and revel in how amateur our fashions seemed back then. The 1970s was a funnily bizarre period, in many ways we were relearning things and waiting for a big change to happen. It was a time when the media of the time (yes that includes comics) were pushing on to see what was and what wasn’t ‘cool’.

I am lucky enough to be a ‘Beta Reader’ for the upcoming volumes and devour anything by Millsverse that lands in my iPad. As I read it again I am struck by how much I enjoyed the second volume, perhaps more than the first and that is saying something. It has explored and developed the style and the characters of the first volume. I’m also struck with how good Pat is with conversation. Perhaps a benefit of all the comics writing he has done over the years. Characters talk with realism and like pinballs bounce off each other in a style that makes you enthusiastically turn each page. Nobody is boring, at no point was I hoping for someone to come back for a chapter. It’s a neat trick that Pat pulls off in making every conversation hugely engaging and yet carry the story onwards.

‘Merged it with Scarper and Blimey’.......’We kept Toffee Nose and chucked the rest of the magazine away.’

As with the first book I loved the references to comics like ‘Everlasting Love’ and characters like ‘Wedding Belle.’ You again play detective behind the scenes of this book by trying to guess who were the real-life writers and artists that are mentioned. Some seem to be amalgamations of the comics journeymen (and women) of the times and some will make you smile knowingly. Companies like ‘Fleapit’ or ‘Angus, Angus and Angus’ are created with Pat’s usual flare for genuinely funny satire, especially in the areas of characterisation. You can almost see the grin on his face as he types away on the next chapter as you yourself discover it as a reader. He even features a comic shop in Covent Garden called the ‘Time Machine’. On what planet could that exist? Hmmmmm...

What we get in this volume is the change that was coming to comics in that period. The characters talk about the influences of Metal Hurlant and artists such as Moebius, Bilal and Druillet. Described as ‘Sensual and Dangerous’ by one of the players we see the real life parallels of the emergence of respect for the reader and the experimentation and exploration of the medium that brought you and I 2000 AD and in this fictitious world the upcoming weekly comic named ‘Space Jam’. You feel the frustration and also the enthusiasm of the creators with this new world beginning.

This isn’t just a book for comics fans however. The use of Masonic organisations and powerful predatory celebrities brings ‘Good Night....’ fully up to date in weight, meaning and implication. Pat shows the dirty underside with humour but also cunningly shows us how we continue to be hoodwinked. These powerful undertones and championing of the Everyman that has always been one of the big draws for me to Pat’s work. If you are part of the establishment he’ll wink, joke, smile and then knee you in the bollocks. Every page has humour and sharply observed pithy storytelling.

‘A hooded knight was playing eerie processional music on an electronic keyboard.’

This is a novel in a series by an author who has an ear for the edginess and tension of a story that lifts it above the banal crowd of novels on the shelves and a humour that ups the game beyond what you have previously become accustomed to in Waterstones. This series is an absolute fucking joy to read. Highly recommended. I read mine in a day and now will be bothering Pat for the next volume.

Millsverse is an example to everyone on how you can succeed in self publishing. Pat and Lisa Mills are putting out regular product of excellent quality from comics to novels to books about comics history to even recently a Judge Dredd colouring book.