Next up in the series of comics reviews by my 14 year old son is Uncanny X-Men #02.

The new X-Men regenesis is off to a good start.  I like the choice of the villain in the new series.  Mr Sinister has always been an interesting premise.  It was also good to see that Emma Frost got what was coming to her.  Despite everything that has happened she is determined to have her own way﻿ and to people down all the time. It seems like not all of the X-Men are concerned about her situation.  Maybe she has lost her charm? 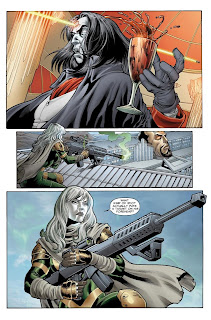 The new team choice is a good one for me as it means that there are lots of good fight scenes.  The comment by Namor about being a target does seem to show that he understands that it is Cyclops who is trying to save his race.  (Eventhough they are probably all going to die because of what he decides to do.)

I think that having the two teams and the split in the X-Men are needed for the survival of the race.  I will probably buy this in trade because it is quite complicated and it is easier to understand what is going on with all the issues collected.