In Preview - 'Impossible' from Markosia Comics. 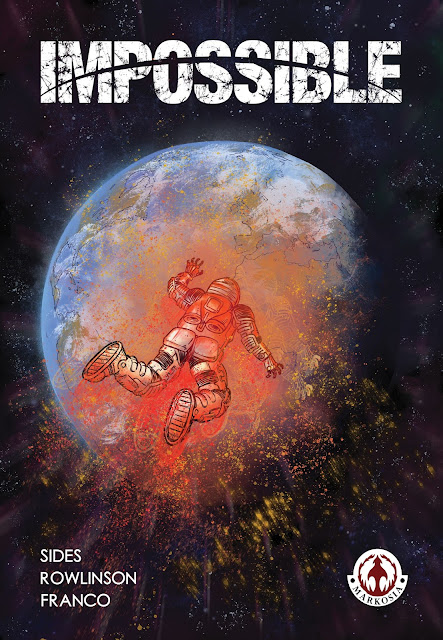 
The Story - '2046. Will McGillis, an astrophysicist, is contracted last minute to join the crew of the AMALA in low-Earth orbit, who are part of an orbital clean-up operation; one that aims to rid Earth's various orbital patterns of space debris, with the future intention of building a new space station/port.


This is routine stuff, but unknown to McGillis, the AMALA's crew have been sub-contracted by a mysterious client to gain access to and retrieve sensitive information from the old, almost completely burnt-out husk of the International Space Station, in permanent high-Earth orbit. McGillis is betrayed and blown out of the AMALA's airlock into space. Unknown to the backstabbing crew, however, McGillis has had extensive military training. Willing to do whatever it takes to get back to Earth and to his family, Will McGillis must perform the impossible…' 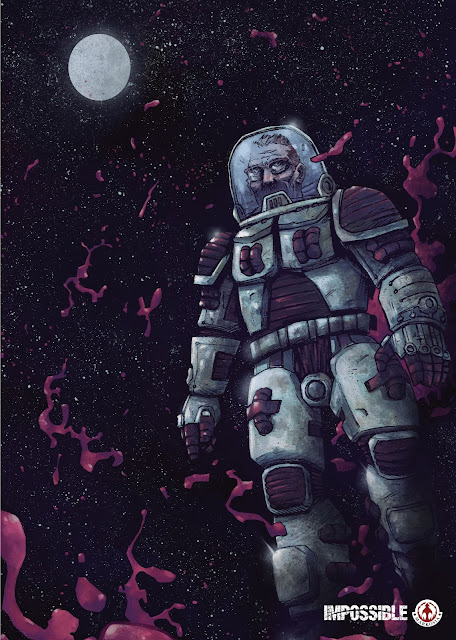 Message from the Creators - 'IMPOSSIBLE is an 86 page graphic novel and the first in a planned trilogy. It’s the first official book in THE FROSTBYTE LEGACY, a series of stories set within a fictional future history of the world, where Frostbyte Industries, a vast, multi-national and incredibly influential technology company, is the one constant.' 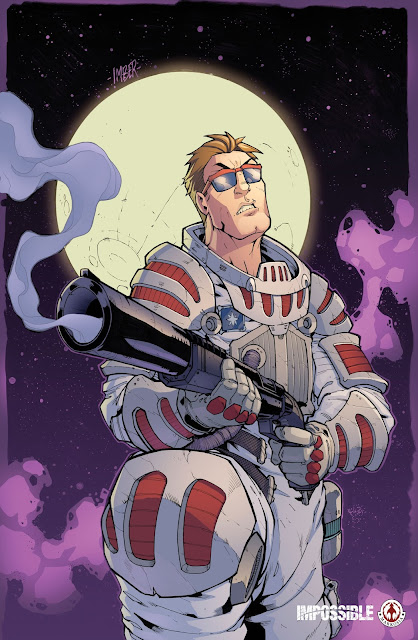 The Preview -  I was lucky enough to get an early look at this new book from my old mucker Sidesy. I hate to compliment the man who once wore a T Shirt that said 'Shut Up Tony' but this is genuinely a next level for the small press world. Chris takes the writing and plotting side of things like very few others do in the small press field. He crafts and strips down and rewrites so that what he produces is of the highest quality. 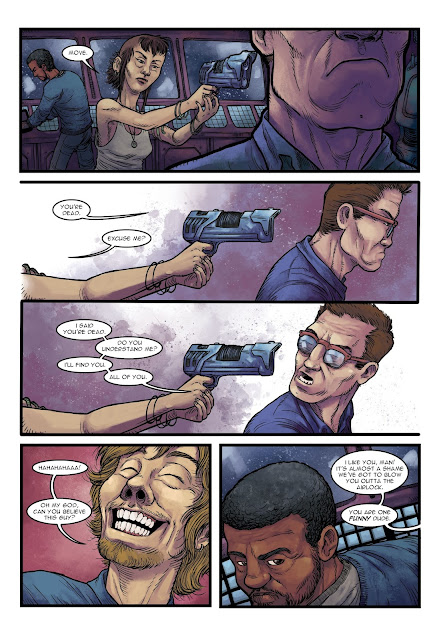 The Impossible is the first in the series and I am already plaguing him with texts saying 'C'mon on Sidesy you bastard, where's issue 2'. I am, I know, prone to hyperbole, but this is one of the most expertly put together comics I have read on the scene for an age. It is honed down so there isn't anything that doesn't add to the mood and story. A story that keeps you guessing throughout. We also don't get a hint of decompression as is common place elsewhere. This builds you up, keeps you guessing throughout and shafts you with a cracking ending.

The art by Jake Rowlinson has a solid foot in both the humour/character side of illustration but also manages to carry weight with the action and drama. He reminds me a little of the work of Simon Roy on 'The Field' a couple of years ago out of Image Comics. Jake sorts them men from the boys with some excellent facial acting and you can always tell who is who and what they are thinking. A small niggle would be that a couple of the space ship models seem a little less detailed than scenes elsewhere in the story but I'm sure that readers won't mind that too much with the gold elsewhere.

Daniel Franco doesn't let the team down either and I have to admit that the change from 'earth' style settings to the blacks, blues and greys of outer space is spot on as I read it on a backlit iPad screen. Some superb use of moody spaceship interior lighting as you can see below.

It's also edited by the mighty (and really, really busy) Ken Reynolds and with 'The Kenster' on bo0ard you really can't go wrong. 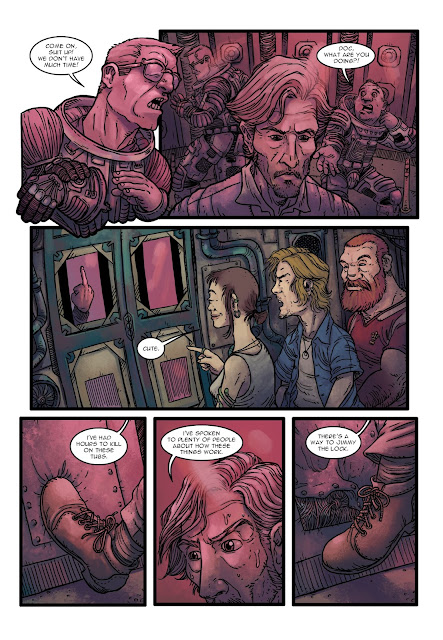 The book is launching at London Super Comic Con and worldwide on Friday 25th August and includes pinups from Jake and Dan, as well as a guest pinup by Reckless Hero’s Chris Imber and Chris Jenkins.


It will be available to buy from:


You can currently pre-order the book via my website at this link - http://www.chrissideswriter.com/the-frostbyte-legacy/impossible


Many thanks for reading.
Posted by Tony Ez Esmond at 10:21