A few early morning thoughts about The Human Beings issue 5 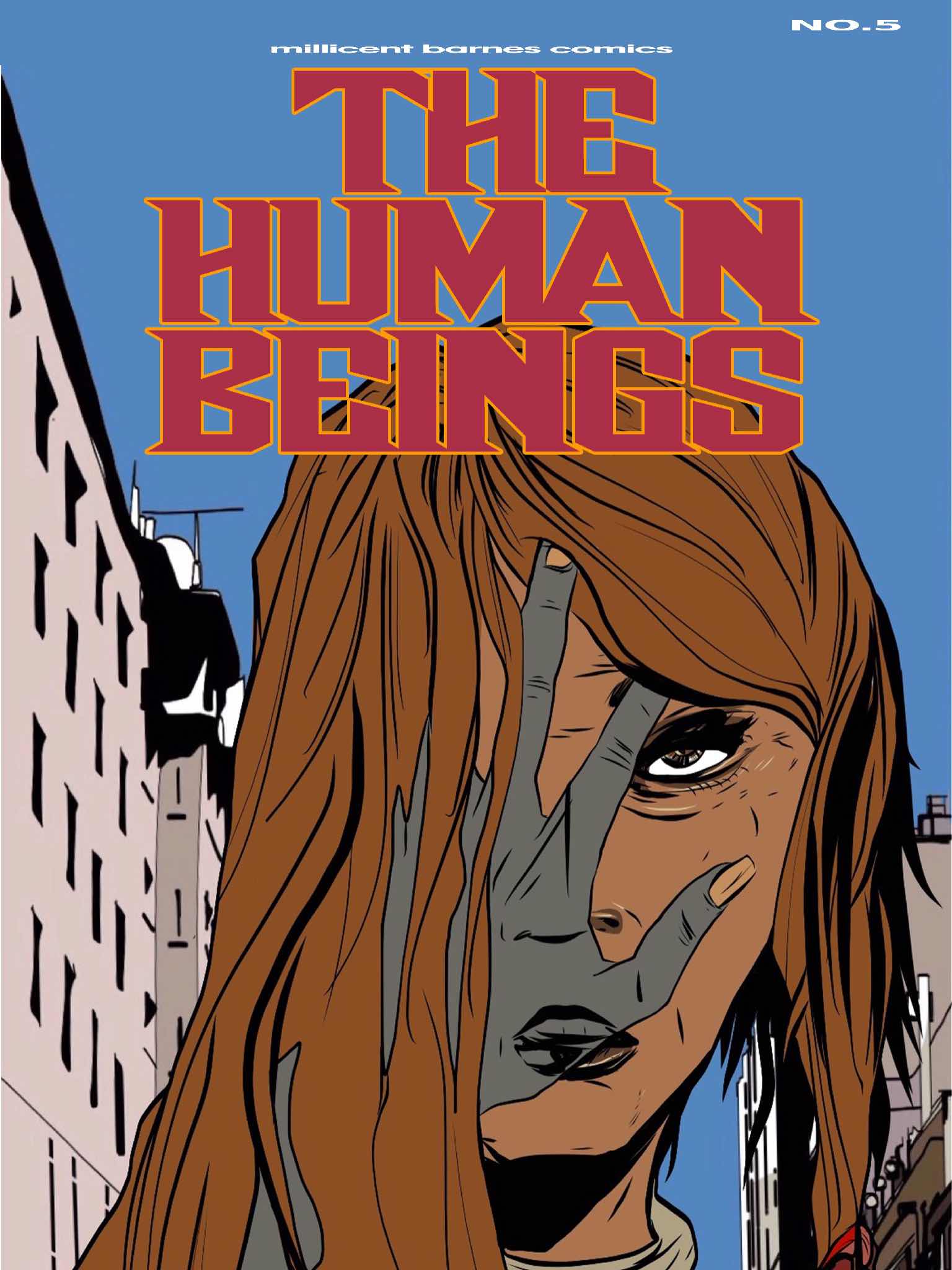 A discussion on the connection a comic made with the reader (me) after a spectacular bout of insomnia.

This is a series that I have followed closely. A series that has me thinking about themes and meanings after each and every reading. I find it darkly dreamlike. It possesses you as you read. A possession of the moment. Dive in.

I opened up issue 5 after twenty six hours with no sleep. This frazzled state has me snappy and weary, the bright light of the morning is stinging my eye balls, but in a strange way improved the impact of this comic on me, a person who is merely a reader, well maybe. (I may be a little paranoid and/or angry? NO I don’t want milk with my black coffee!!!!)

I’ll start with the cover. This close up of the face and the seemingly sedated dead eyes of the woman remind me of some of the iconic images of a previous series of Stuart’s called Monolgue. Added to this image is the ghostly hand passing over the right eye of the subject. The cover makes use of bright colours as a counterpoint to an otherwise darkly created image. It’s a strong scene setting opener. Powerfully in your face, close up with that added twist. This is a cover that you would reach for on a shelf.

Page 1 was a surprise. Not at first viewing did I think that this was part of the story but after reading this and working back through previous issues I am now wondering if I need to reconsider.... It’s a self portrait of the creator himself, partially hiding in a hood. A shadow over the image shows the shape of a hand and a smart phone that are in turn photographing the self portrait. An image of an image of a person. Hmmm, the revelation of the self, the view in the mirror, the establishment of the person. Underneath reads the quote;

‘Everything is and is not as it should be

Nothing left to burn

What does this quote mean? How does it link to the narrative. Does it stand alone with just the creator pictured above? I’m guessing it’s a bridge into the story.

The Human Beings remains both a story that I have obsessed over at each release and also a mystery to investigate. There are clues dropped throughout this series. I have followed and deciphered and guessed. As Stuart is a friend of mine I occasionally challenge his wry grin at my guesses both on the phone, online and in person. This cunning bugger never gives much away. But I do feel that his comics are both a story and a communication. A reach out in a real way to the reader.

I am reminded of Bacon’s assertion that art is a recreation of something else. A figure, a feeling, an emotion, a story, politics, beauty, horror. All reimagined in another way. And yes, maybe a discussion or a proposition.

The Human Beings is a comic that gets you thinking. It inspires me to write about it and leads me to tangentially write about other subjects. That should be enough. But I do love a mystery! Follow the clues.

My thoughts on some of the comic follow. But I am careful not to spoil.

The story takes place after the cliffhanger of issue four. Things are seriously going off the deep end. Crowds in a busy train station bustle about to get on carriages. A spotlight of colour picks out faces for the benefit of the reader whilst a narration talks about the reality of a government that are unprepared for a destructive event of this scale. I am struck with how Stuart deals with faces throughout his work. His style allows for the strangers in a crowd, unnoticed and anonymous but also for the close-up, the character study through the sudden look and the reactions of his more focused character studies.

In the middle of the description of how the world was falling I began to realise that words that are on occasion whispered in previous issues are now almost shouted. The story is breaking out......

‘Power took root in the insane.’

What you also get from this sequence is that The Human Beings is very much of the moment. I’m not sure how much this is intended but should that matter. The drama of our own real-world news seems in sync with some of the drama in the comic. However I really hope it wasn’t.

The reflections of current news items is only a small part of the themes of this series. It is in other ways in my mind a reflection of ourselves. Our strange and hidden motivations. Our knowledge of the lives and actions of others are on occasion an alien country. Stuarts cast are strange and oblique reflections of ourselves, they will look sideways at you and through you as they speak.

‘So this is what makes us Human Beings?’

This characteristically intense and mysterious artistic approach is intrinsically at harmony with the layouts and art experimentation you experience as you turn the pages. As with other comics he mixes multi movement images in an excellently designed full page series of flowing images. It shows the value of both experimentation, but also doing so with a reason linked to the narrative. This includes overlapping dialogue and narration boxes on occasion to show a fever dream echo of the chatter of voices. 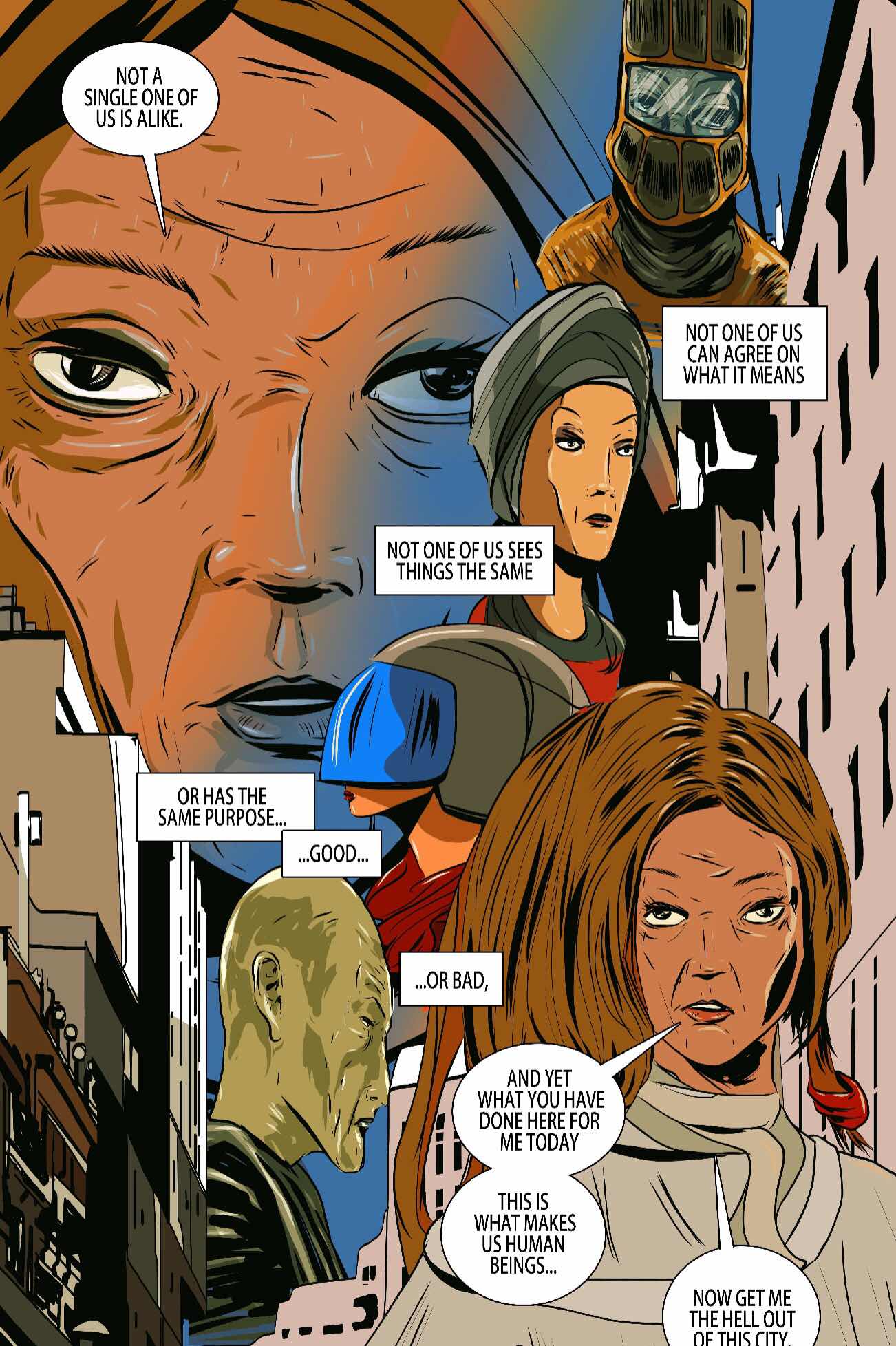 See what I mean about reading when sleep deprived?

The story keeps on rolling and you see some genuinely touching moments come along as the seeds laid in issue one are played out (for what I suspect is just the moment). Some mysteries are expanded upon and will again pique your interest and judging my the teaser page for the next issue there are more on their way.

It is a reading experience that you will return to. Add to that a shorter story and a hint at what will follow in the next issue. This is highly recommended (with or without sleep!)

I backed this on Kickstarter and await the collection and the single issue any day now. Stuart is one of those reliable creators who uses the crowd funding platform as a pre ordering system. I can’t wait to see the next physical copy!

Find out more about this and other comics from Millicent Barnes Comics at www.millicentbarnescomics.bigcartel.com or follow the creator Stuart McCune at @SturatMcCune