In Preview - ‘Darwin: An Exceptional Journey’ from Nobrow Press. 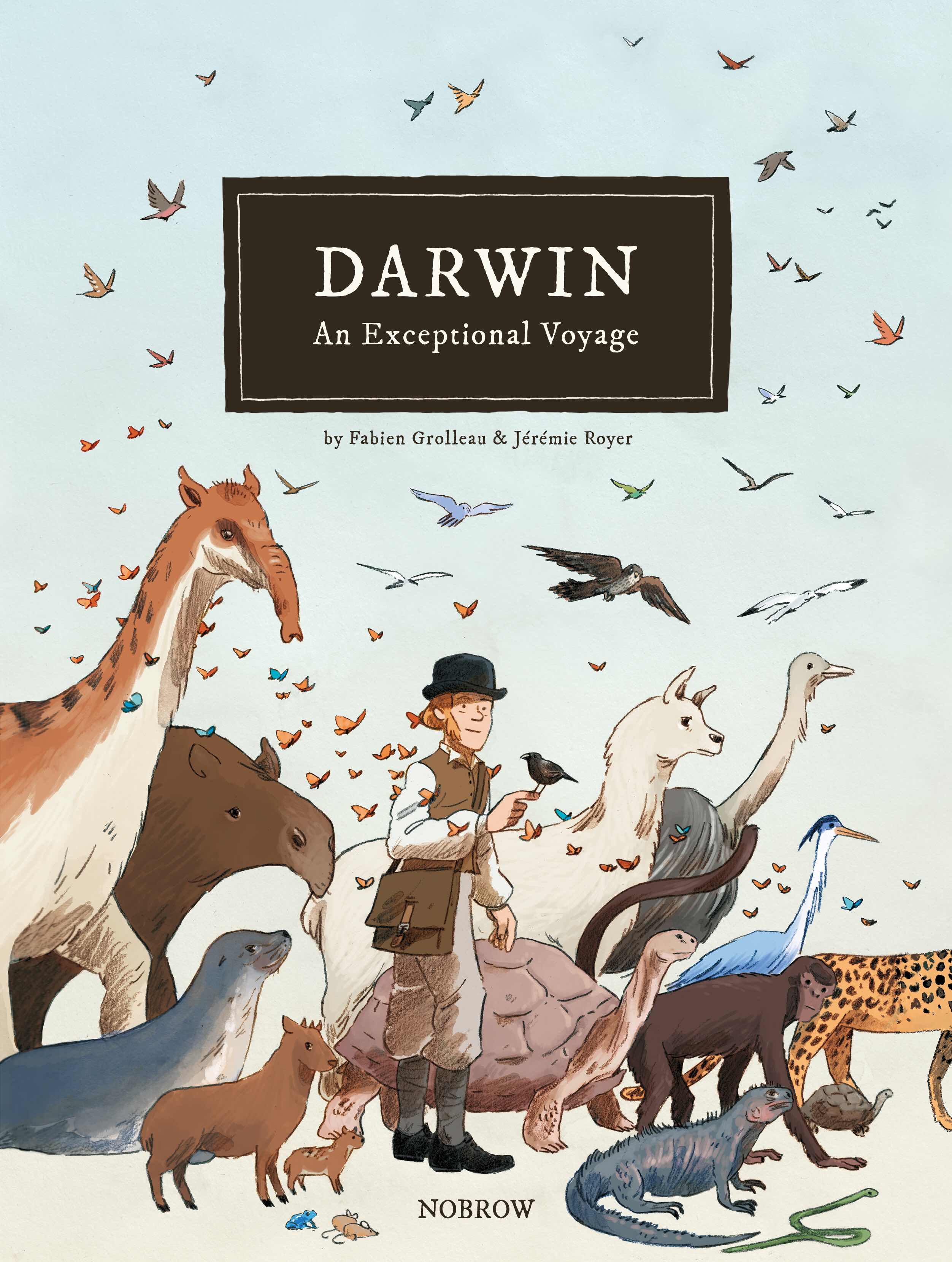 The Story - ‘The year is 1831. A gifted yet somewhat distracted young man named Charles Darwin has been offered a place aboard the H.M.S. Beagle. The journey will change both his life and the course of modern science…

This follows legendary scientist Charles Darwin as he embarks on the voyage that began his career. Join him on a journey of thrilling discovery as he explores remote corners of the natural world and pieces together the very beginnings of his revolutionary theory of evolution.’

‘Over five years, the ship would travel the world in a series of complex voyages, impossible to recreate in a graphic novel in their entirety........ Our focus is on the personal element of this epic odyssey.’

The Review - The cover to this English language translation by Nobrow  is typically playful and also tells a story. Darwin has an iconic image of a red haired young man with a bowler hat that brings memories of a touch of Tin Tin. His adventures are no less exciting than his Belgian counterpart and this book takes a brave leap into the life of an iconic figure and pulls the feat off with style. It is at once educational and also stunningly beautiful. As our hero wanders across the cover of this book he is surrounded by the animals he studies.

This is a biography of sorts and opens with an older Charles Darwin surrounded by his children and family. His children insist on a story whilst his wife heads out for some errands. He decides to tell them the story of how he boarded The Beagle and began a long world-wide adventure.

The story time shifts back to Christmas 1831 in Davenport dockyard. When the weather clears Darwin sets sail initially to the Canary Islands and then much further afield. A church service is held on board and you begin to get a sense of one of this book’s ongoing themes of the clash of cultures and the way that the ‘west’ impacts/pushes it’s morals and religions on the ‘Un-civilised’. But these moments are never heavily dropped on the reader and are dealt with a real sense of history and subtlety. The creators take a neutral role and allow the history in the story to tell a certain unslanted yet all the more rousingly significant tale. 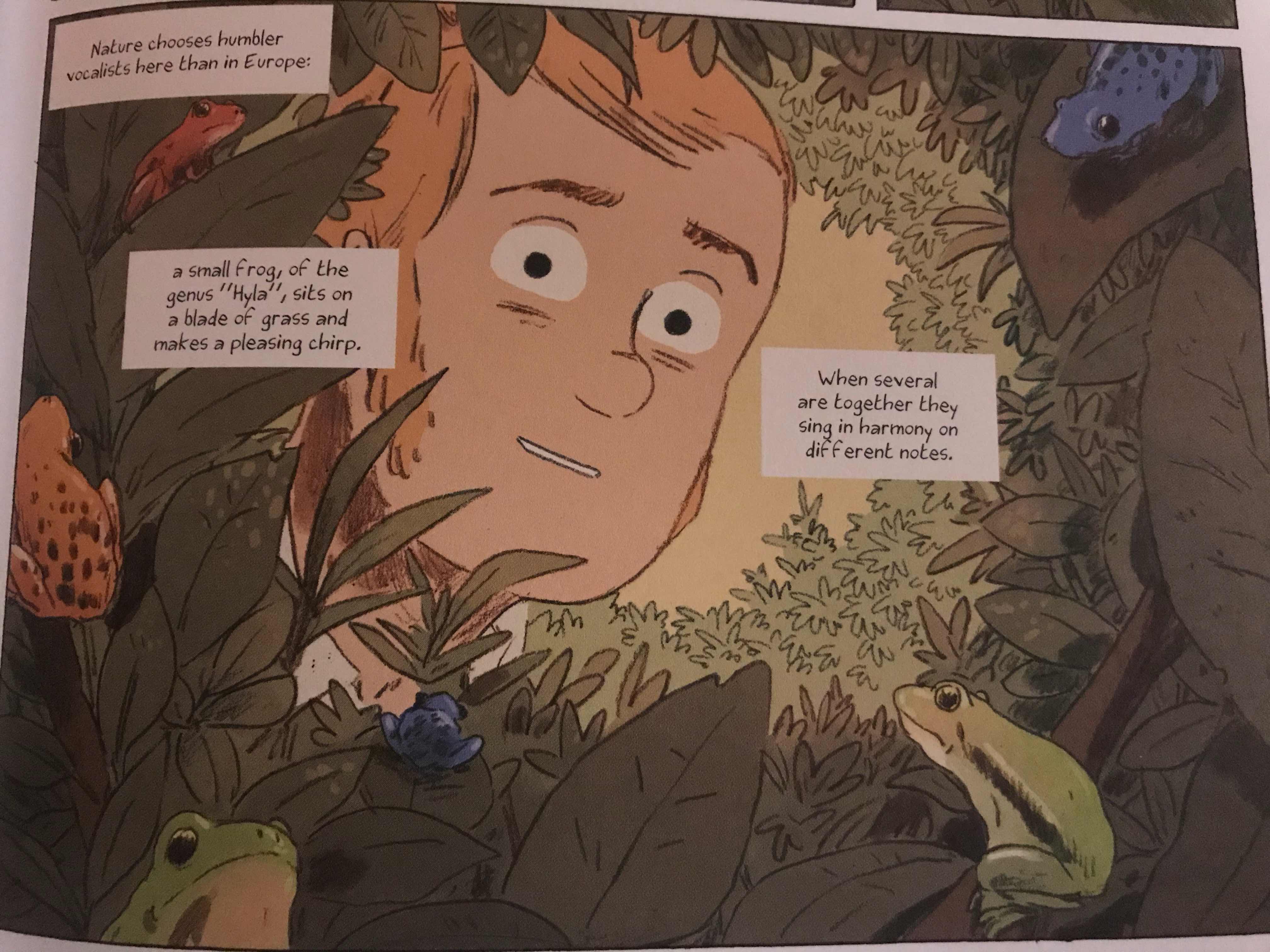 Honestly, no hyperbole but Charles Darwin could easily become one of my new favourite comic book characters. He has a wide-eyed innocence and a genuine love of and for life. For a young man facing severe hardships and an uncertain future he swings for the sixes. He maintains the role of intellectual sponge and learns from everyone and everything he sees and encounters. You see his growth and learn as he does. Not just in his pursuit of understanding the natural world but also in his education on the complexities of all human interaction.

‘.....property would allow a chief to exhibit and increase his authority.’

We see the world around Darwin and it is a complicated one at that. We see the issues of disease, death, religion, slavery and more. You also see the harshness of life at sea and he gives himself over completely to the mission, away from home for many years dealing with obtuse Englishmen, curious islanders and countries at war.

It’s the moments when Charles is alone that really resonated for me on the first read through. Our hero explores a Brazilian rain forest at one stage of his travels and as the heavy rain hits he hides under a giant leaf and laughs warmly at his own circumstances. Or another favourite moment is when Darwin is sat on a bank overlooking the beach. He is confronted by three naked native women in Patagonia. Their bodies are bared apart from tribal body-paint. These women giggle and steal his hat. He is unfazed and lives in that moment merely choosing to watch them skip and run along the beach in this/his strangers hat. This is some excellent story-telling.

‘Every evening as darkness falls the concert begins’.

At an early stage in this review I would also like to make two very important points. Firstly this is no short read. It is a hefty hardback full of details and excellent wordplay at an not insignificant one hundred and eighty-four pages. It is also ONLY £16.99. Other publishers would easily charge you twice that! (It’s rare that I moan about the cheapness of a book so savour this moment!) 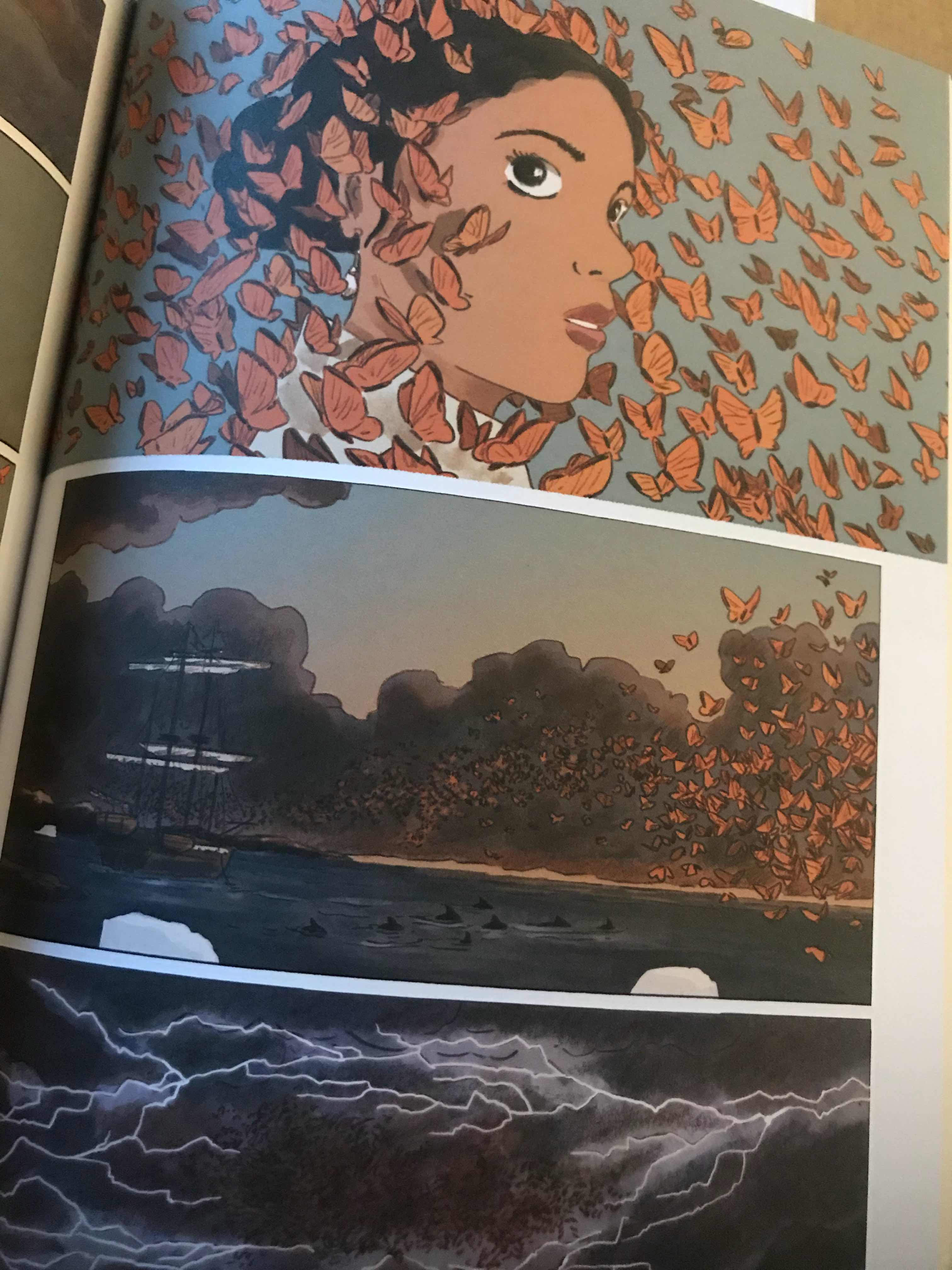 I started to read this book during a recent bout of insomnia. I soared through the first one hundred pages and decided at that point to take a break and hit the hay. I wanted to savour this book a little more and for a little longer.  I awoke still thinking about this biography. I was more than a little haunted by the artwork of Jérémie Royer. He occupies an artistic placement that is a combination of cartoony caricature and breathtakingly rendered detail in the close up and on the full page landscapes. As I earlier closed the book to head for bed I caught sight of the moment where two ‘Westernised’ natives are married on the deck of The Beagle. The ship is invaded by orange and red butterflies as the black and grey sky is lit up by a web of forks of lightening. As this happens the sea below them is a green shade of haunting luminous under lighting. It is magnificent. Like an instagram obsessed teenager I found myself photographing this sequence and posting it online.

‘The mountain! It’s burning with a thousand flames!’

This. Just this moment. These pages. This is why comics are such an amazing medium.

Read this book as a piece of art, a great comic, an educational book, a political and social document on an invasion of one society on many others or maybe all the above. Charles Darwin comes across through this book as a man full of wonder and enthusiasm. He is never judgemental of the ways of others and keeps on his course for years. It is also extremely beautiful and will have you return to the pages time and time again.

Fabian Grolleau has written and created several comics for Vide Cocagne (which he co-founded0 as well as the graphic novel, Jacques a Dit.

Jérémie Royer is an illustrator and designer. After studying art for two years in Nice, he specialised in comic book art and illustration in Brussels.

This book is due to be released from Nobrow in February 2019. Here’s the link to find out more https://nobrow.net/shop/darwin-an-exceptional-voyage/ 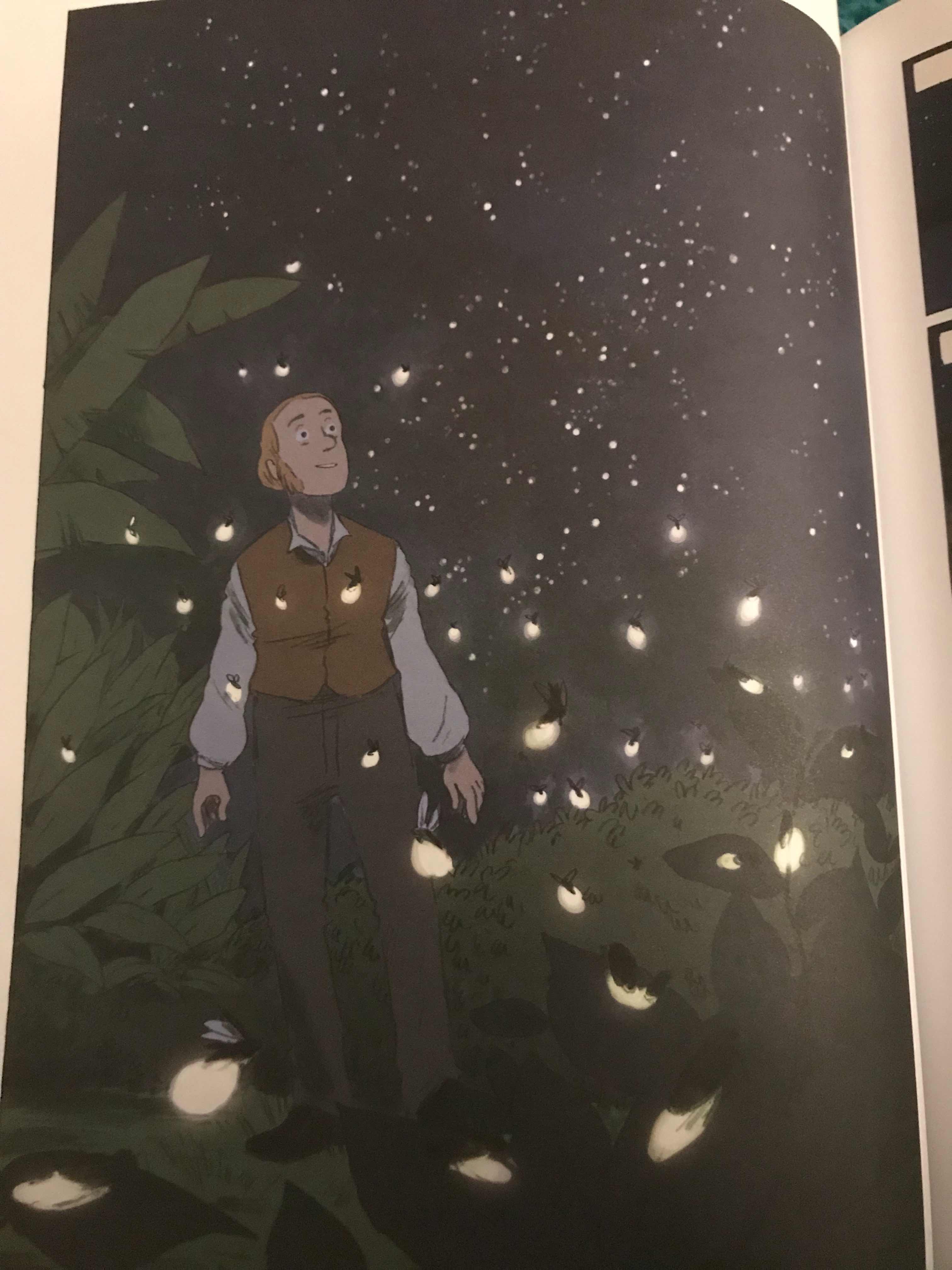