Here we go. This is another essay about one of the supporting characters in Cockney Kung Fu.

As I am sure you must know by now. Cockney Kung Fu is one third of mine, Vince Hunt's and Dan Butcher's new comic venture 'Awesome Comics' that gets it's big release at the True Believers Comic Festival next Saturday.

I cunningly title this short story.....

'Dancing had once been his life.'

Or so he’d always imagined.

The Hoofer sat in the corner of his nicotine stained bed sit. On the floor and in the corner. He was shivering. This was a crappy apartment and he knew that. He’d kid himself that a bed sit off Carnaby Street was near enough to the West End that if someone dropped out he could be on stage in a shot.....

‘Just like the old days’. He spat the words out over the cigarette that he held in his shaking hands.

‘The legs will work just fine.They’ll never keep me down. Not me darling, not me.’

He was in actual fact a deluded old queen. The chances of him being offered a role in show were pretty much zero.

Even five years ago when his gambling debts became too much and a couple of the Cooper’s boys broke his ankle with a hammer he was well past his sell-by date. He’d been a dancer at The Windmill and had soft shoed his way through the breaks between strippers and to the indifference of the male crowd. But to him it was dancing on a stage and in an actual theatre no less. The comedians had come and gone and he was still there like a skinny white Cab Calloway. He’d nip to see a bookie here and there between performances.

Well that wasn’t exactly true. It hurt The Hoofer, especially when his ankle was bent over and bleeding and those two meathead idiots who wouldn’t know a Ziegfeld from a Zeppelin were laughing as he cried. The held him down and bashed it over and over again with a hammer. The Hoofer lay on the floor in excruciating pain as he realised in that moment that his dreams had been totally crushed. He’d never ‘Heel, Toe’ his way through a number anymore.... 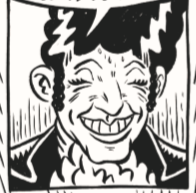 They’d finally let him go with threats to pay his debts or more violence would be round the corner. As the light was coming up over the flats and offices of Charing Cross Road he limped his way home. His tears still flowing down his sunken pock marked cheeks. Lost. Truly lost in a moment unexpected by him yet inevitable to everyone else who knew him. He decided to just give up. Too afraid to fight back, run or argue back. He lived from that moment without any joy, any love or even fun. He just scraped his way onwards living day to day and swallowing his pride.

He went crawling to the Cooper Brothers when they called him. They knew that he would, they’d seen his type a million times before. Then they told him that all his debts would be forgotten if he ran the fights for them. Now he comperes the late night bare knuckle in the basement in Rupert Street. He likes to think that he adds a dash of Broadway to the proceedings but what he really knows is that it is a dark and dirty hole he has gotten himself into. A hole that will take more than he currently has in energy to climb out of.


The Club has a basement. When it’s not being used for storing nicked gear or the odd sawn off the crates are pushed back and once or twice a week they hold a bare knuckle event. It’s become quite the crowd puller. All the dregs of London turn up and bet money on the outcomes of fights. With one big fight and a few others on the card he got to announce the contestants and the winners of each competition. He also had to mop the blood up off the cigarette scattered floor and on the odd occasion take a trip to the Thames to dump a body.

So here he stood. Looking back at himself in the bed sit shaving cream and toothpaste stained mirror. Ashamed and yet bracing himself for the night. He was back combing his grey and white streaked beehive to such a height that Earths Kitt would be proud of him. He plucked his eyebrows to a shape he liked and then winked at himself in the mirror.

‘Time for the show’, he said to himself. ‘Who is it tonight? Wonder what the odds are?’


More about The Hoofer in issue 1 of Awesome Comics.