In Preview - ‘Gamayun Tales: The King of Birds’ by Alexander Utkin 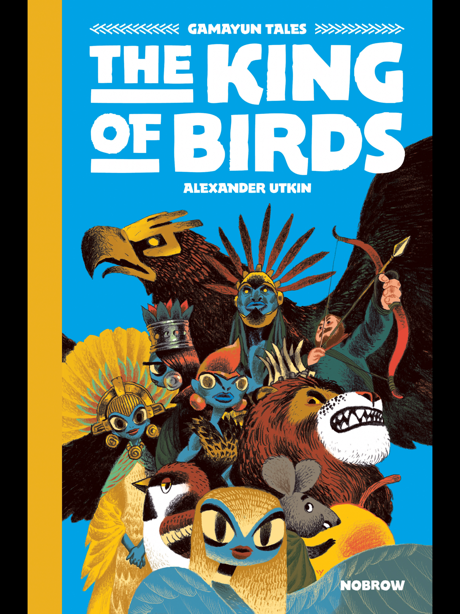 In Preview - ‘Gamayun Tales: The King of Birds’

Written and Drawn by Alexander Utkin.

The Story - ‘This is the story of how a small golden apple started a great battle. It all began with a mouse and a sparrow, but soon all the animals and birds were waging a mighty war. After all, the King of Birds forgives no one....But what will happen when he finds himself at the mercy of a plucky merchant?’ The Review - This is a comic based on traditional Russian folklore and translated onto the drawn page by the super talented Alexander Utkin. Like all good stories of yore it is not story for the meek. Utkin brilliantly transfers to the comics page the feelings that we all had as kids when we heard these frightening stories. In the same way that the Brothers Grimm filled their stories with murderers and thieves this book has that sharply unsettling feel to its story and art.

In the narrative we follow an argument between friends that escalates to a world war of too proud nations. From that we see transformative Machiavellian shenanigans that result in nefarious twists and turns in a fairy tale that you never really get to second guess. The wisdom of our forefathers is self evident in the selfish emotions of many on the page and they echo through our current news cycles. And so should all great stories be that are told from fireside to computer side.

Utkin excels in the colourful weirdness on the page. He has adopted a style that draws out iconic images in fully realised figures of grandeur. A favourite page has the King Eagle atop a gnarled branch, wounded yet proud the backgrounds show the browns and yellows of an autumn evening. The light on the page has to be seen to be believed. Each panel seems to have been swept off an easel and into this book.

My favourite player in this book is a merchant who is the saviour and then plaything of the King of Birds. He is a thick set and ruddy faced individual. He watches and obeys as the giant Eagle King morphs in front of him from bird to statuesque god in Utkin’s marvellous brushy and bright pastel drawings. He is a cracking character who bravely follows the seemingly brash and unwise orders of his friend for good or bad.

This is a book that was previously published in Lithuania and is presented here in a glorious hardback for a great price by the mighty Nobrow. Alexander Utkin himself is a comic creator, illustrator and musician from Russia.

Released on the 15th of January and well worth a few quid.

Find out more about Nobrow and the rest of their titles at www.nobrow.net or follow them on Twitter @NobrowPress

With the Hilda on the Netflix horizon this should really be the year for Nobrow and they are well worth having a look at and buying at least a couple of their library.