A few thoughts .... ‘The Human Beings issue 6’ from Stuart McCune 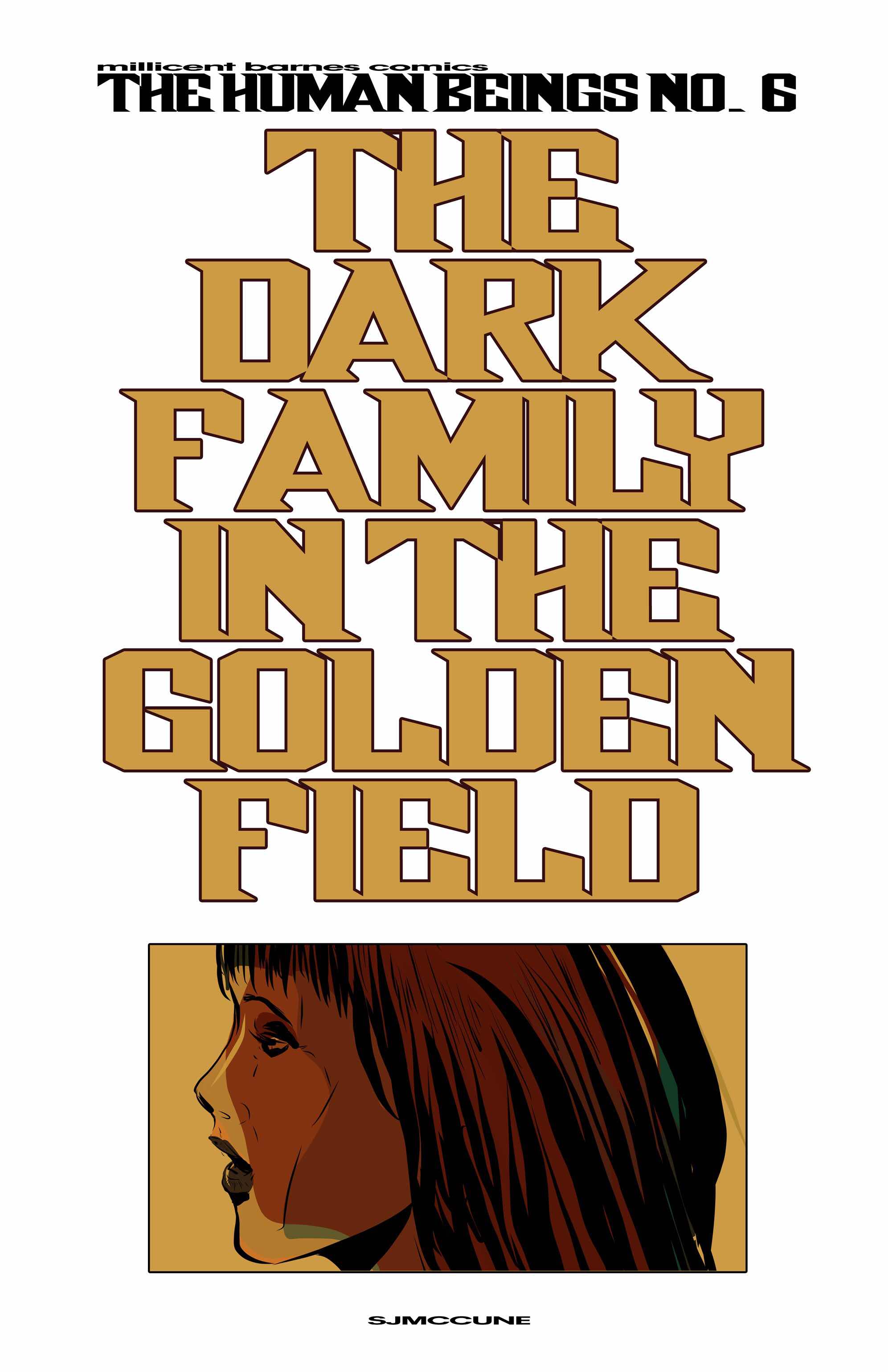 ‘The Dark Family in the Golden Field’.

‘As if in a trance Maria watched the woman.

For it seemed to her then that she was watching the dead still centre of the world.

The quintessential intersection of nothing.’

Joan Didion. (Play it as it Lays.)

I approach this review in the same way that I have approached the reviews of all of Stuarts work. I read the book, try and find how it affects me, and it always does. I try and examine what I think he is saying. I try and investigate the underlying truths of the book. And I compare it to nothing else out there.

My fingertips reach out to touch just the edge of Stuart’s reality, never totally in contact. I suspect that I’m picking up on a few things here and there that he will never admit. Nothing should ever be totally understood. None of us are that stupid or that insightful.

I make no claims that this review is accurate.

This week as I read I am struck that Stuart is in fact a hitman.

A Brief Mention of the Story.

A man and a woman share a moment. A sensual and post coital moment in a bed. She nags him to repeat a dream that he has had. This world of the two people is a familiar one. We lay in that moment of total timeless existence. Sharing ourselves after the physical moment has ended. This takes place in a hotel in Rome.

‘I tell people I’m an artist, I even hold exhibitions.’

A sniper picks out his targets. Narrating his life and never totally being what he seems. At once the world of The Human Beings takes a nasty and sinister turn. Faces are intensely gruesome and plans are teased at the players and the reader.

Maybe there is a moment that links back to a certain Monologue? Maybe not. 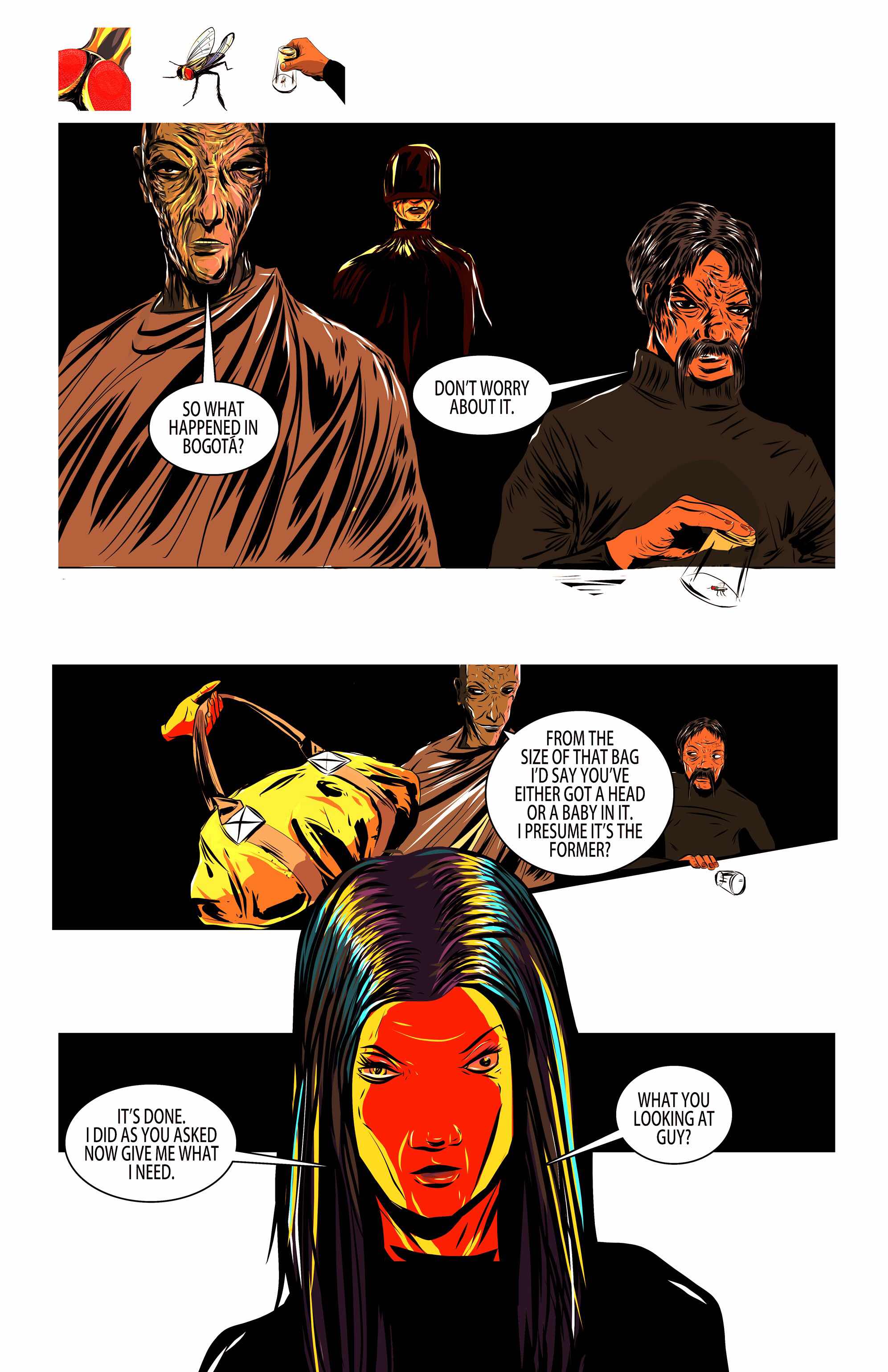 For this is a world of quietly spoken sentences becoming a nightmarish brutality. This is a twisted love story, a dark and dangerous romance. The images of the past, of stars being interviewed on a chat show couch. The reflections of the television screen giving it a sheen of glamour.

Added to the main story which is absolutely captivating you get a shorter story that is connected called Heist. It hints to future crimes. You also get a one page hint at issue 7. (Coming soon to a Kickstarter near you).

A Letter from The Creator.

What you also get that I found interesting is a two page piece of prose from Stuart. It is prefaced by this quote;

‘I no longer belong to anything you can imagine’.

A piece about an encounter in an old bedroom is not what you may expect. I read it with a smile on my face. The Roman equivalent of chasing a wasp with a shoe perhaps? Or something more? I smile again at it’s imagery.

Everything McCune creates has an extra layer.....

It is followed by an image of a woman in a photo. Her hair barely visible as the centre section has been torn out to obliterate the personality. Maybe? 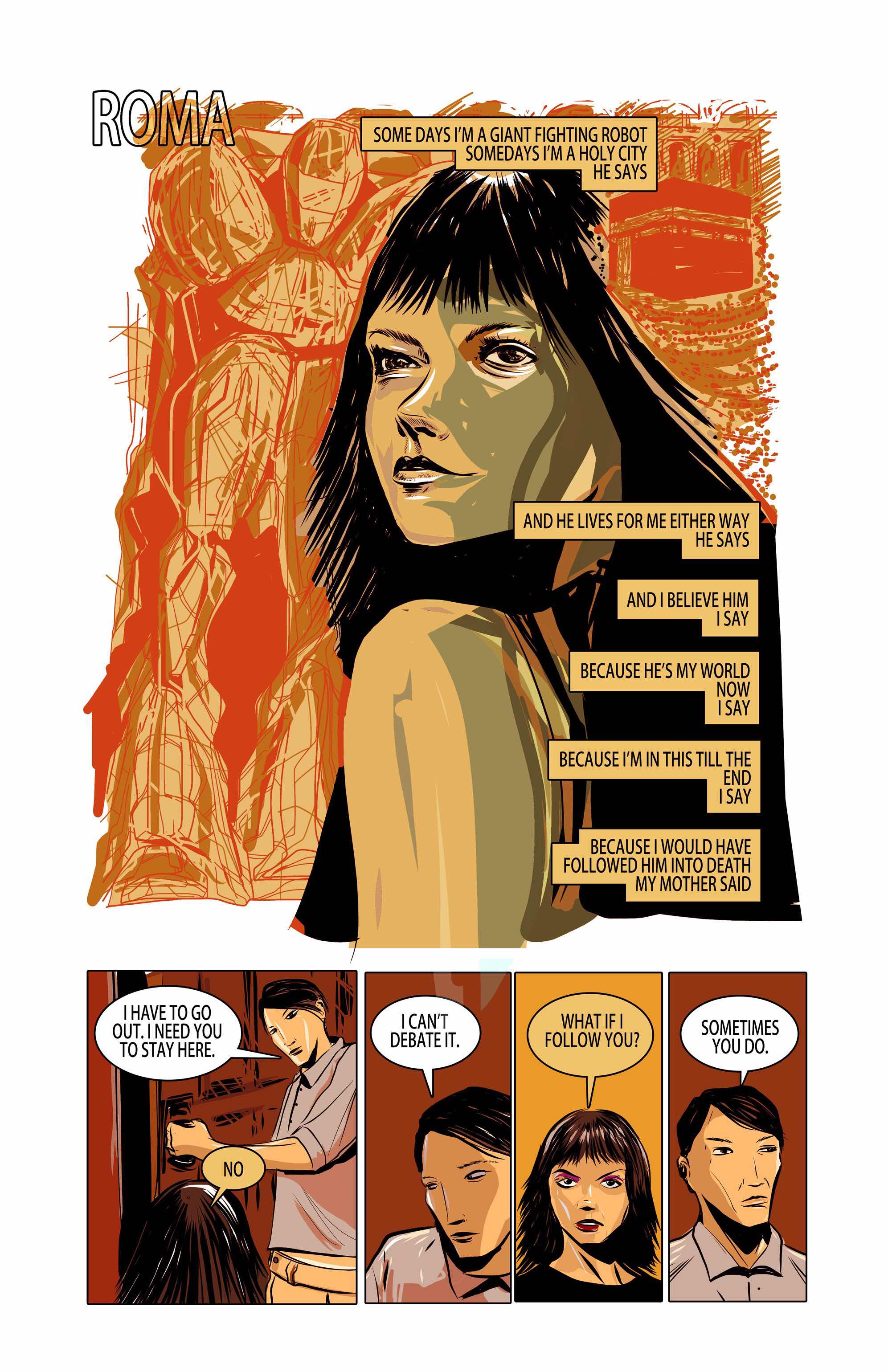 The Human Beings is a series that interconnects with theme, character and story. It is, as I am often saying, not designed as a quick read on your lunch break. But it should indeed be read. It has both a literary feel and a beautifully sinister art style. It whispers at you with nuance like a great jazz solo.

I also assert that it is the nearest you will get to a David Lynch movie in a comic book. Intense moments are handled with supreme ability and also have a slight, ever so slight, wink at the reader. A wink that dares you to investigate, explore and uncover what is at it’s heart.

It is, as the early quote suggests an intersection of many things, themes, people and purposes. I consider Stuart to be a good friend, a man of depth and humour. His fingerprints, in fact anyone’s fingerprints, have never been so visible in a piece of art. The artist is the art. His story is verse and chorus bouncing the reader through a chaotic structure of a narrative. I enjoy what he does, find it a puzzle I want to at least try to solve and am also at the same time inspired to create for myself.

If you have never read his work before you need to open up your eyes. Just try, you never know what it will inspire you to do.

Stuart also sent me a couple of extra pieces that I’m not allowed to talk about at the moment but speak to future events in this great series. What out....

You can find out about Mr Stuart McCune at www.millicentbarnescomics.bigcartel.com

I also suggest you follow him on Kickstarter. Just search for Stuart John McCune.

That bit I always put at the end.