In Preview - ‘The Theory’ from TPub - An Honest Opinion. 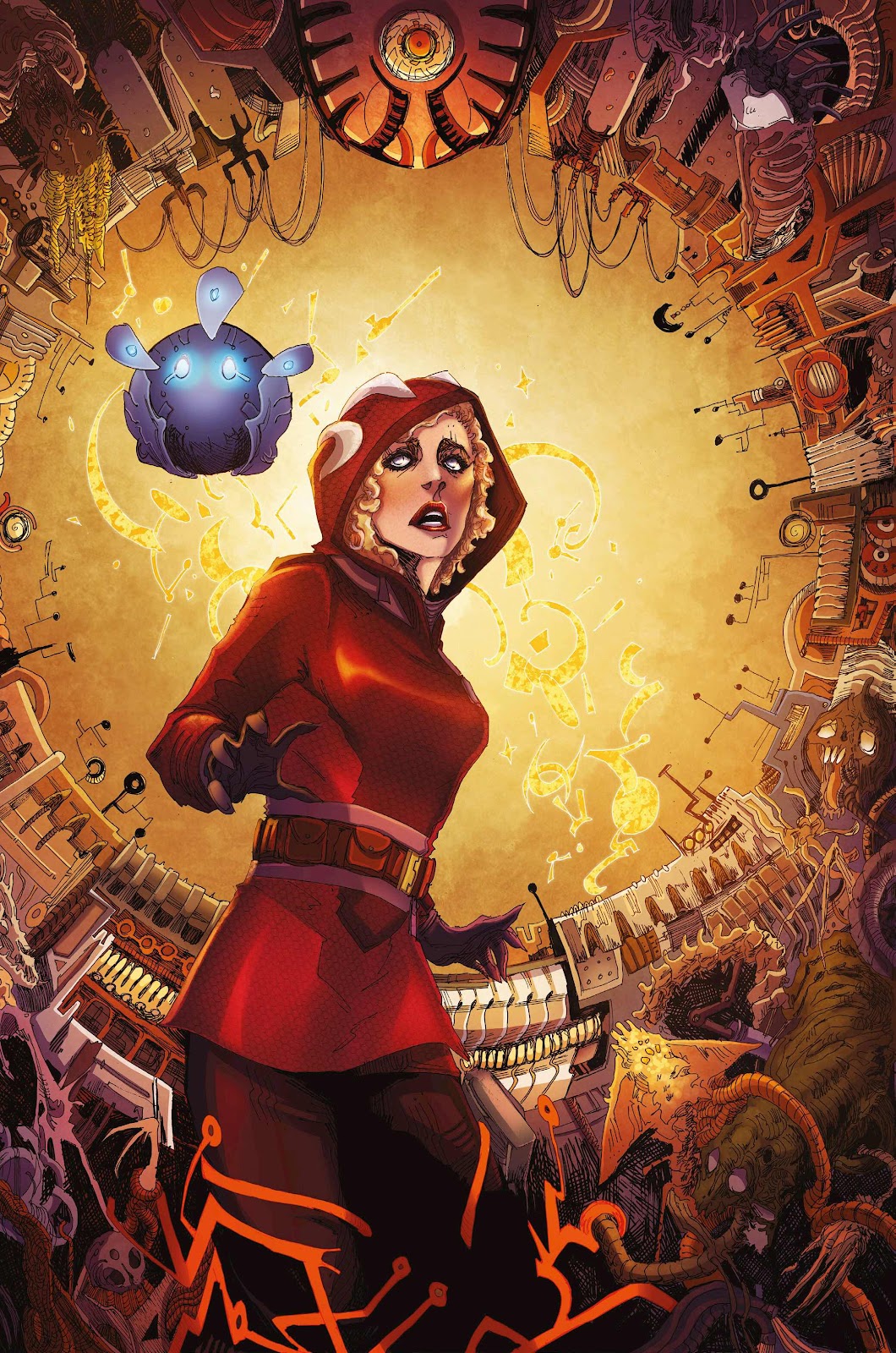 Created by Neil Gibson and Tpub.

I received this from Tpub and James Linton who is a writer himself and also works in PR but doesn’t have a web presence. This particular email reads like something Neil himself would write. Read into that what you will.

The book opens on a quote from Mother Theresa (yes seriously).

There is then what follows an introduction from writer Connor McCreery that boldly states:

‘Neil has started another incredible journey with this book.’

This introduction is actually all about the author and doesn’t really apply itself overly to this particular project. It is however an exercise in telling the reader how great this creator is, how funny, how generous and more. It is so non-stop adulatory that it borders on sarcasm. In the email that Neil/James sent me I note that a couple of review sites have given this book a glowing report. Maybe they didn’t read this introduction? (Or the actual comic?)

This is what the email from Neil/James had to say about this project;

‘Humans have achieved the seemingly impossible – faster than light travel.

Despite discovering hundreds and hundreds of planets that once contained intelligent life, we have yet to discover a single planet where that life remains. These planets have one thing in common – they were wiped out, either by accident or by design.

To track and study these dead civilisations, a group of astroarchaeologists have been created to help educate humans on how to avoid the same fate.

Seemingly working on the other end of the spectrum, an elite team of time travellers have been created in secret to help minimise human suffering. They travel through time performing ‘minimal alterations’ to the timeline to help achieve this.\

Join Linda, the astroarchaeologist and Jemm-r, the time traveller, on an adventure to save our future and our past.’

OK then. Let’s get started. 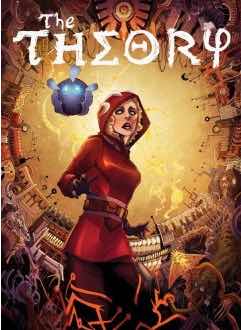 The cover looks great and is credited inside to Abigail Harding and Vince Sunoco. There is a great use of colour and design on show but I’m a little confused with the dead eyes of the female character? (Is she a zombie? Is she blind?) Asking a question is only a good thing and leads into a need to find out...

This story opens with a quote from John Waters.

Two space archaeologists who are also a couple investigate the fall of a city, a civilisation and a planet. The two scientists use a for or VR scanning that ends on an emotional moment.

I have to admit to being weary of the laboured (over)writing before I finish panel one of the story. Here are a couple of examples from that opening panel.

‘I am detecting the remains of humanoid forms all over the planet.’ (‘..humanoid forms..’? Why not ‘humanoids’?)

The lettering also seems to bold out words randomly? The writing is increasing in need of an editor or someone just reading it out loud and stripping back what isn’t needed. In the second panel one character opens a conversation and when replied to says ‘Hmmm?’ Like this reply was unexpected.

The story ends on a line that would look overly melodramatic in a daytime soap opera.

‘Oh God. That’s how this world ended? Because of misguided passion?’

The art is workmanlike and good enough and communicates through reactions and some small amount of action. The colours in themselves are also OK, albeit pretty basic, but could do with more distinction visually between the story of the scientists and the VR moments? 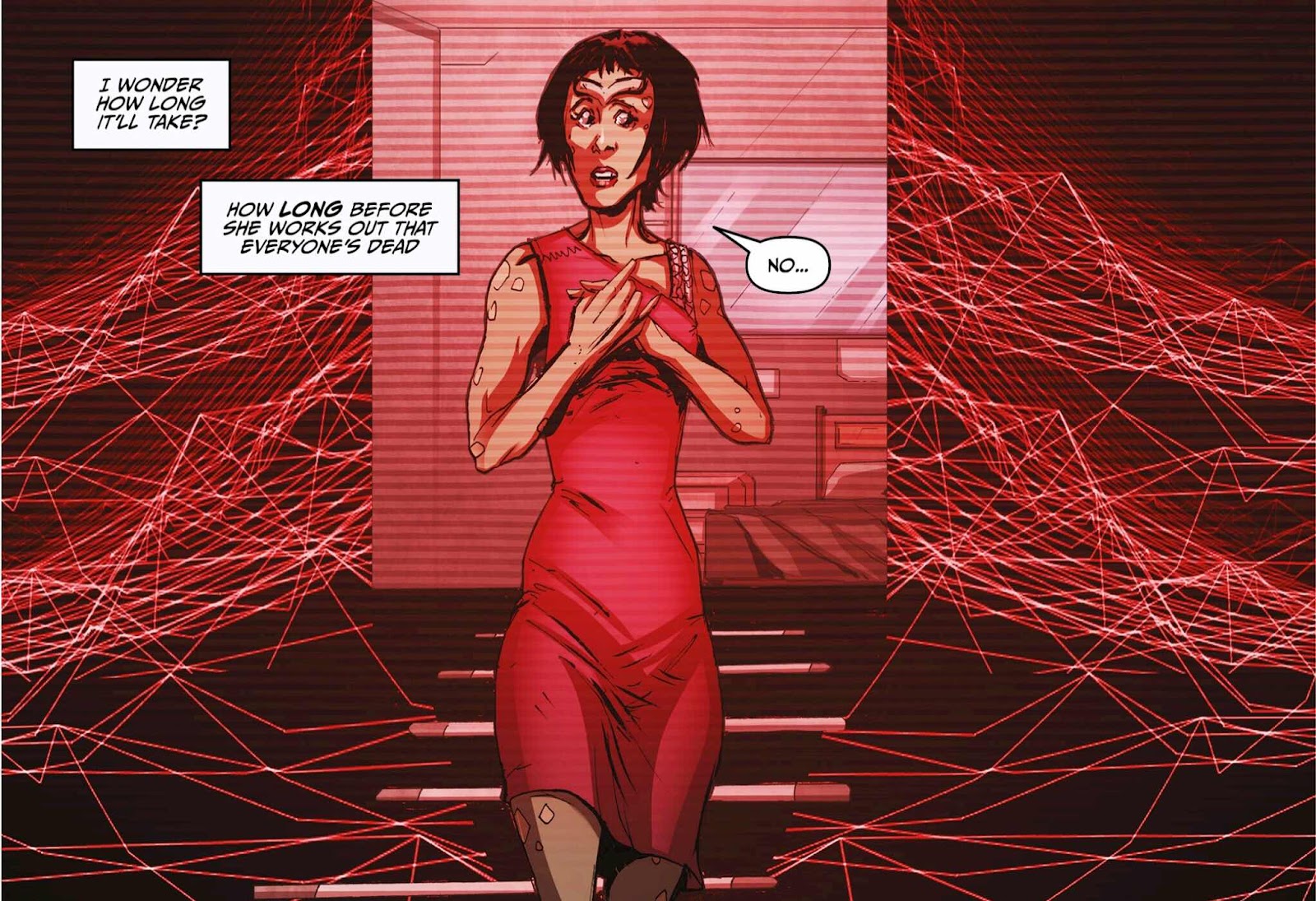 This is a really hard book to read. I’m finding each panel a labour to get through and pretty darn boring. I check..... 172 pages? Oh dear.

After the aforementioned last scene there is some bridging material that looks like two characters talking to each other in an ancient Street Fighter video game. It seems to be filling in short-falls in the actual story and interrupts what little flow has been created for me as a reader. 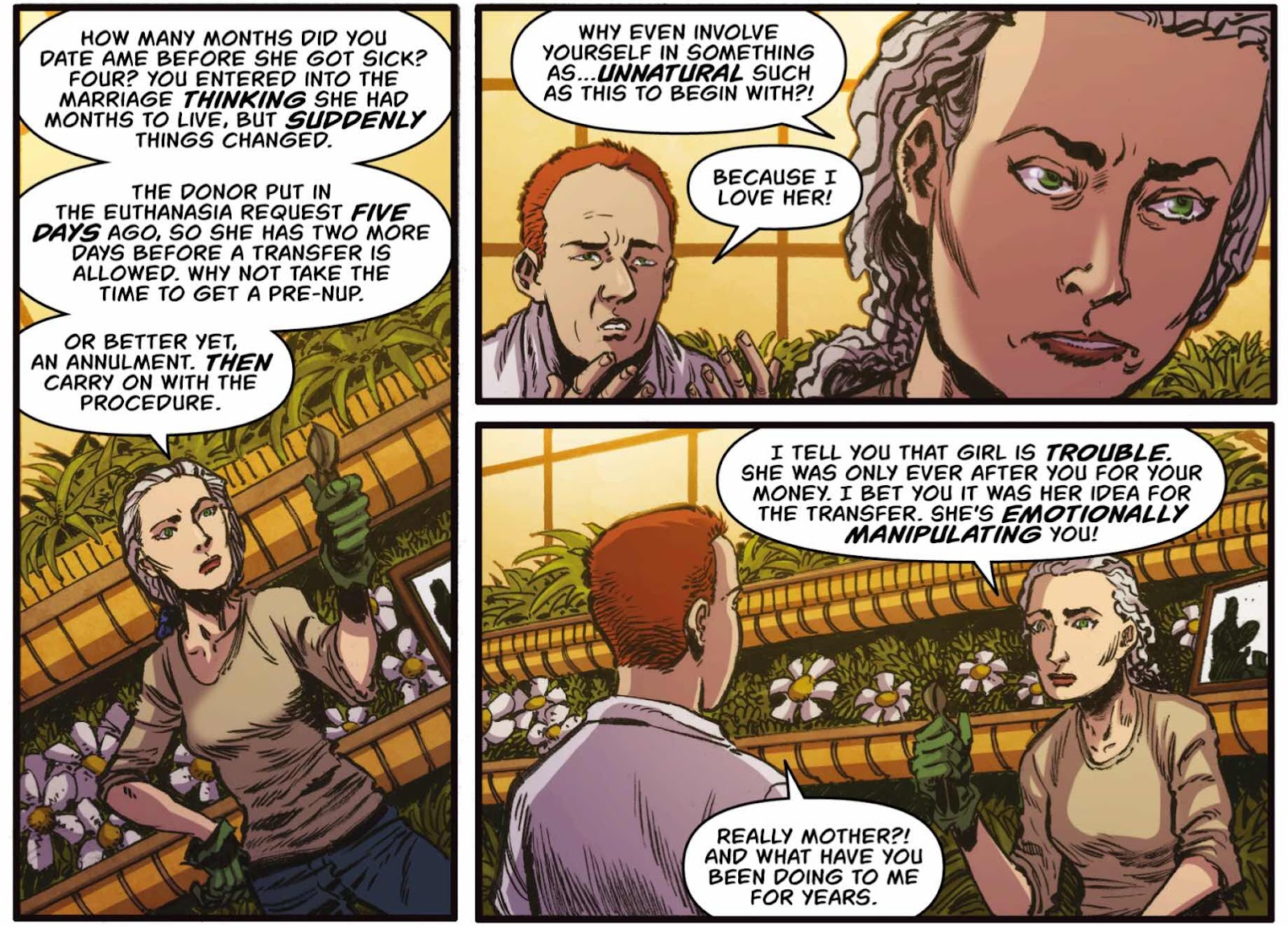 This chapter opens with a quote from George Sand.

A man in the future with serious mother issues is considering a body swap for his terminally ill and very newly married wife.

I found this story much more engaging. There is more of a Twilight Zone feel to the narrative and whilst there are moments of some serious over writing and story beats that are waaaay too on the nose (a moment where after a mother/son argument and a door slam we focus in on a photo on the mother with her son in her arms, newly born at the hospital) I found it an improvement, albeit slightly predictable.

The art again works well for the story. I’d say that the last page shock/splash seemed a little simplified and I’d love to have seen more detail. The mother and son are distinctive and nicely designed with a comedic chubby faced boy effect on the son.

There is again a page of bridging material that is used to explore the bigger narrative picture - I’ll leave it there in case you wanted to read this book and don’t want it spoiled. 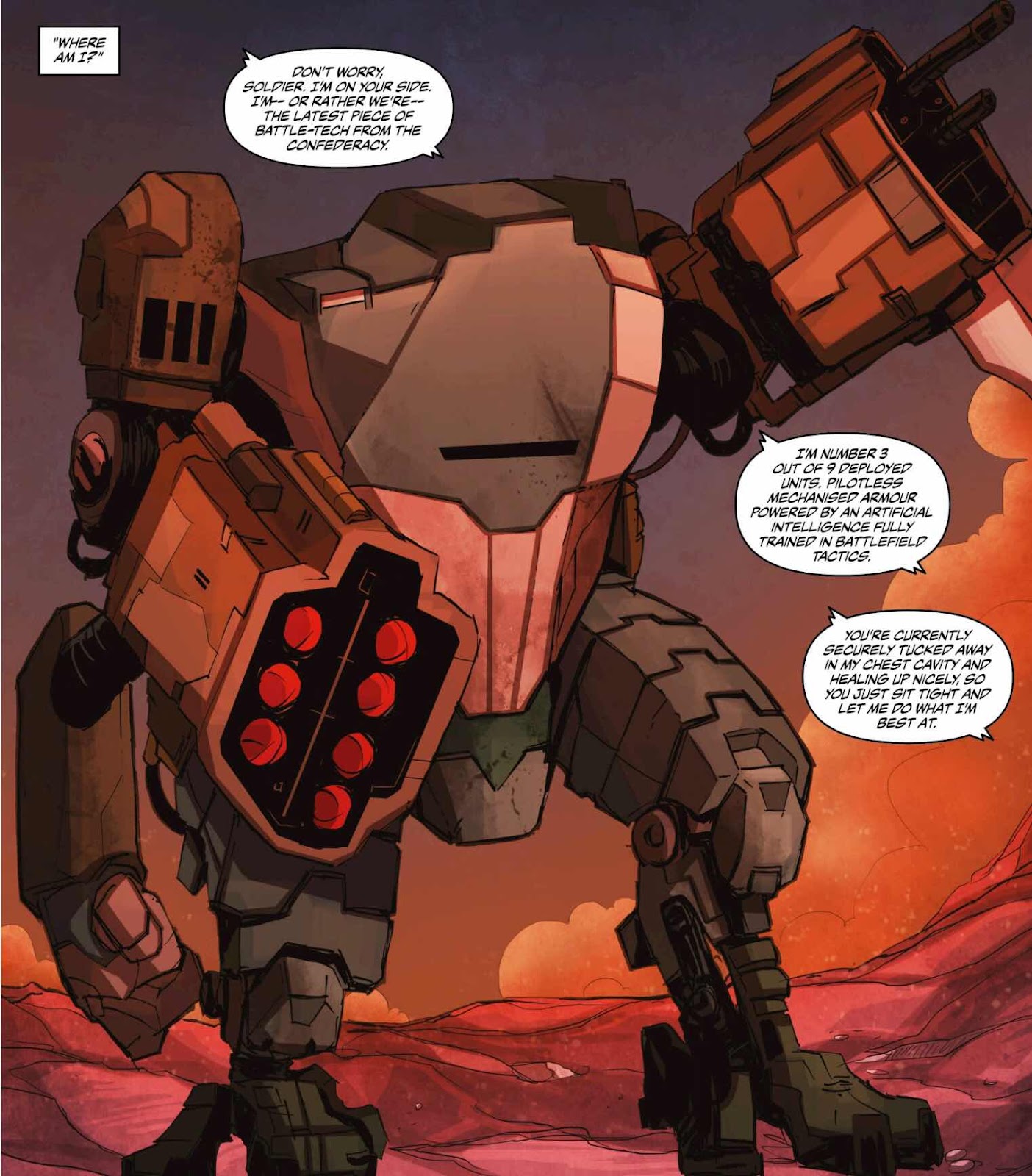 This story opens with a quote from Carl Sagan. (These quotes are really beginning to grind on my nerves, they seem both pompous and randomly chosen.)

This story is back to the space archaeologists who uncover some Mecha battle technology left on a long abandoned battlefield. Some of the batteries are still functioning and the memory packs tell a story of a civilisation obsessed with war. Soldiers are seemingly cared for within mobile life support units within large tank like mecha who all the time continue fighting.

This was a vast improvement and has some interesting story twists and visuals. It has an intriguing darkness we’ve not seen so far. More of this sort of strory-telling please.

There is then another piece of video game bridging material that I forced myself to read and neither enjoyed nor found remotely funny. 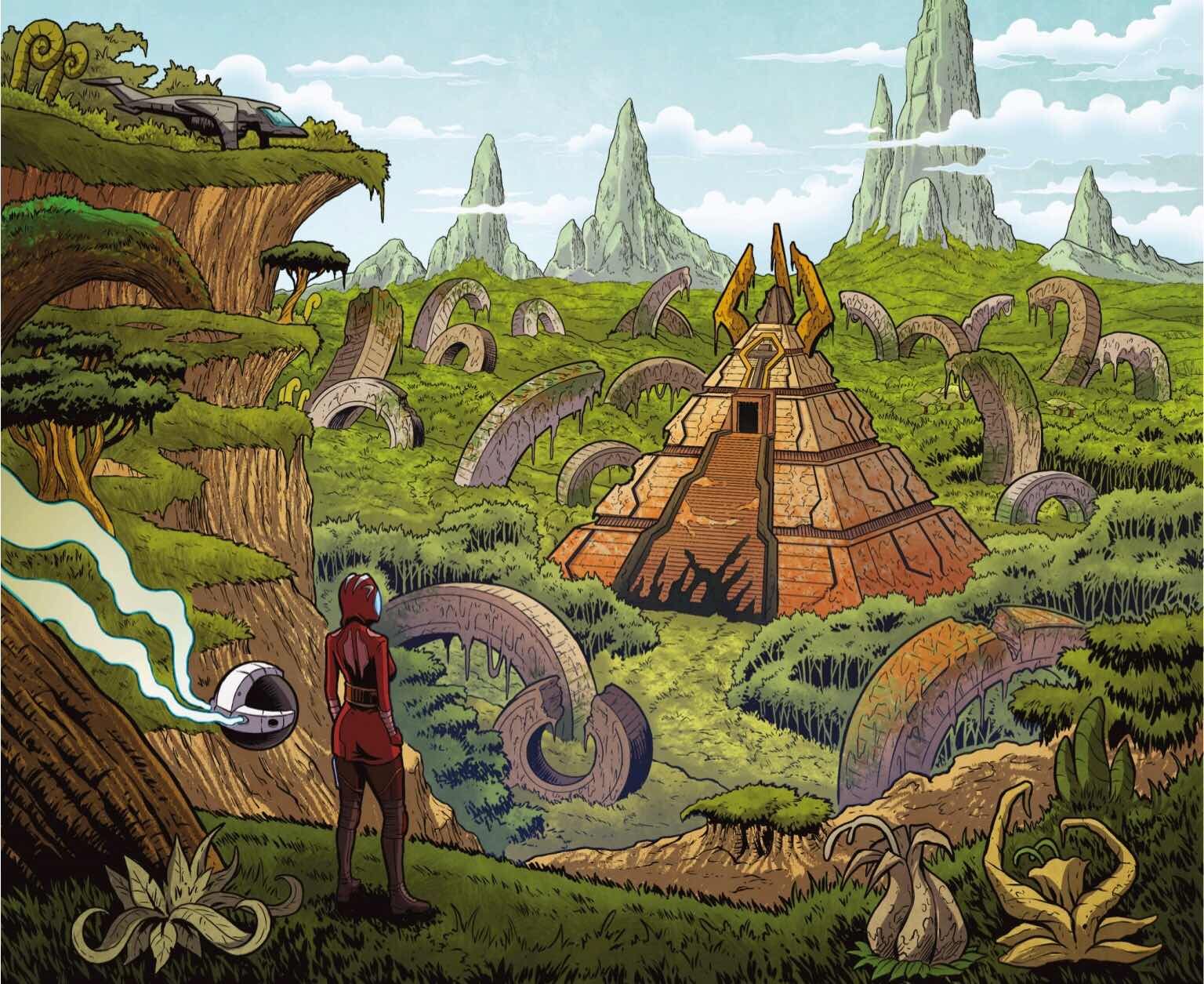 This one opens with a quote from George Bernard Shaw.

This is the story again of Linda, our plucky space archaeologists who has seemingly chucked her husband, who discovers the history of a civilisation that rose and fell. Linda connects to a cube she finds that taps directly into her brain and then tells her the story of a sophisticated culture who succumbed to their need/addiction for technology.

First off, the art on this story is pretty darn good. It has a widescreen scope, some excellent designs and loads of detail. The colouring feels a little on the nose and could do with some art/colour coordination on mood and vibe but is generally serviceable.

The story lets the art speak for itself and in many ways this works. But sadly you are a third of the way through this chapter when you get what Neil is aiming for in an inevitable story twist. You realise that these cubes are an analogy for the internet and social media. You realise it quickly and easily. You realise the parallels made between the cubes and the smartphones in our own earthbound hands. Yet Gibson pushes this on and on and on (and on). This could be half the length easily in a story we’ve all seen before.

This book could REALLY do with an editor.

The quote is from Wesley Snipes (no, seriously).

This is the story of a future prison where humanoids and aliens are sentenced to terms of imprisonments based on real crimes and crimes of thought and intention that are judged by robotic guards and men in Marks and Spencers suits.

I found this overly slow for the subject matter. The ending felt jammed in and confusing when compared to the breadcrumbs that had previously been seemingly scattered. The prison setting seems derivative and under-realised.

The art could really do with both more detail and some consistency in settings. The main character has some kind of hairy forearms and talons/claws but the staff on the parole board could be straight out of a modern day court drama. The layout, design and backgrounds in the prison are bland and the inmates are in the most part interchangeable.

Really not for me and a book I find hard to recommend to others.

So there you have it. I’ve reviewed five of the stories in this collection. Some highs and some lows. There are in total ten stories and I will get on now with reading them and not spoiling them for you if you wish to purchase this volume.

I’ll reiterate that this could really do with an editor. Someone with a trained eye could make out the over-writing and rather too obvious plot twists. The art is pretty good on occasion but suffers a little from some really obvious colouring choices. The lettering suffers from some ‘bold’ use and issues that could do with reconsidering.

May I say to finish that Neil Gibson constantly referring to himself as ‘Creator’ (constantly) is accidentally pretty darn hilarious. Especially given that he is the only person credited on the cover.

You can find Tpub online and preorder this volume at https://tpub.co.uk/store/the-theory/ You can follow them on Twitter @TPubComics