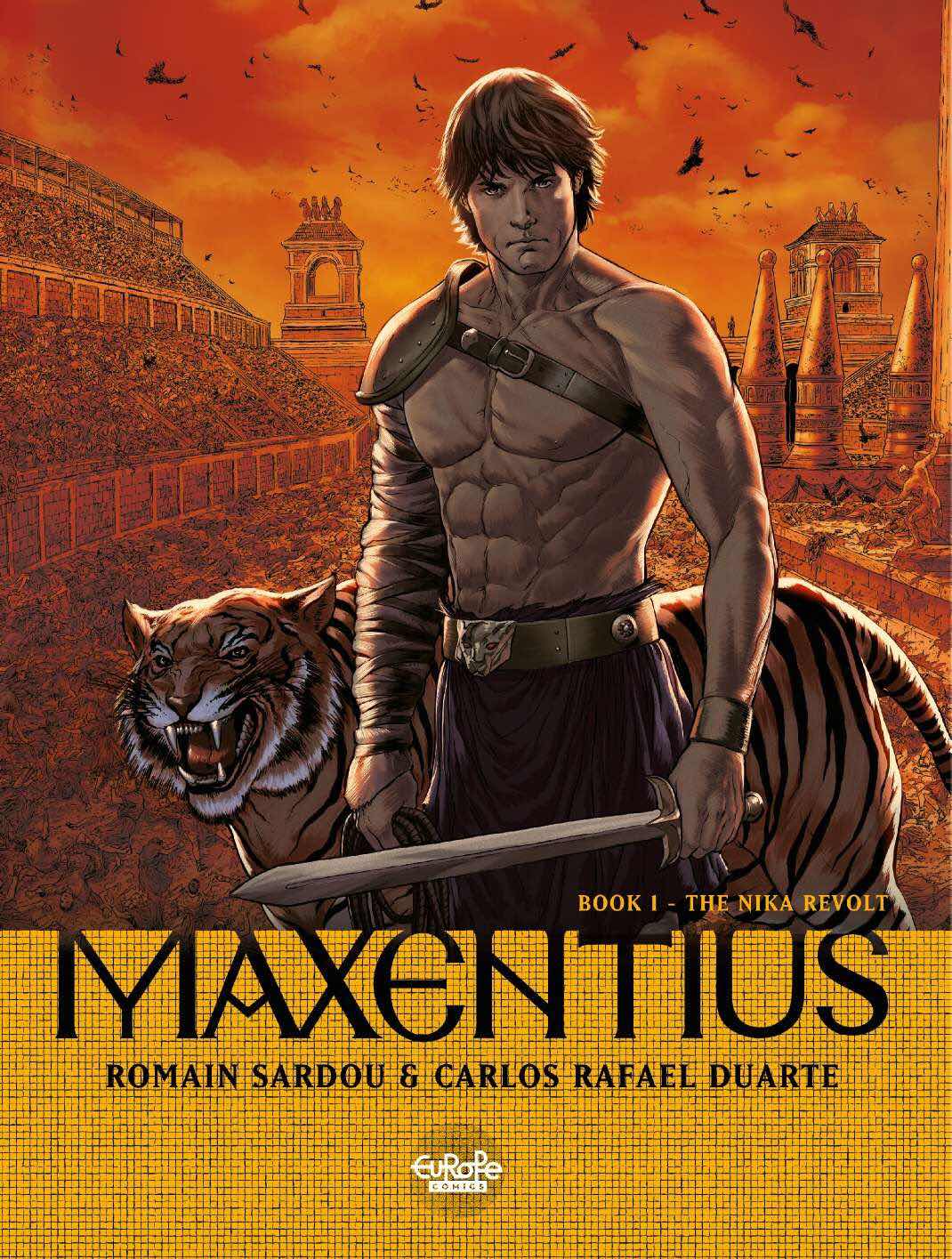 Originally published by Lombard in 2016 - www.lelombard.com

The Story - ‘The year 532. Justinian rules over the Eastern Roman Empire, his wife and most maleficent ally, Theodora, at his side. From his capital of Constantinople, he dreams of restoring the empire to the splendor of Ancient Rome in the time of the Caesars.

But during the month of January, following an accident during a chariot race in the Hippodrome, Constantinople is set ablaze. Now everything hangs in the balance: the throne, the imperial couple, the empire…

Maxentius, an animal trainer and the empress’s assistant, has just a few hours to save centuries of history.

A few hours during the Nika revolt, supposedly the bloodiest massacre in antiquity…’

‘Why do we always forget to say that the young are closer to death than the old.’

The Review - This book is the first in a series of three books that Europe Comics dropped on Comixology this month. It is a beautifully realised sprawling epic and one that picks it’s action and plot from the true history of Constantinople and beyond. Because of this setting we get a short history lesson at the beginning of the book that whilst it could be seen as a little dry by many is in fact a scene setting tool for what is to come. 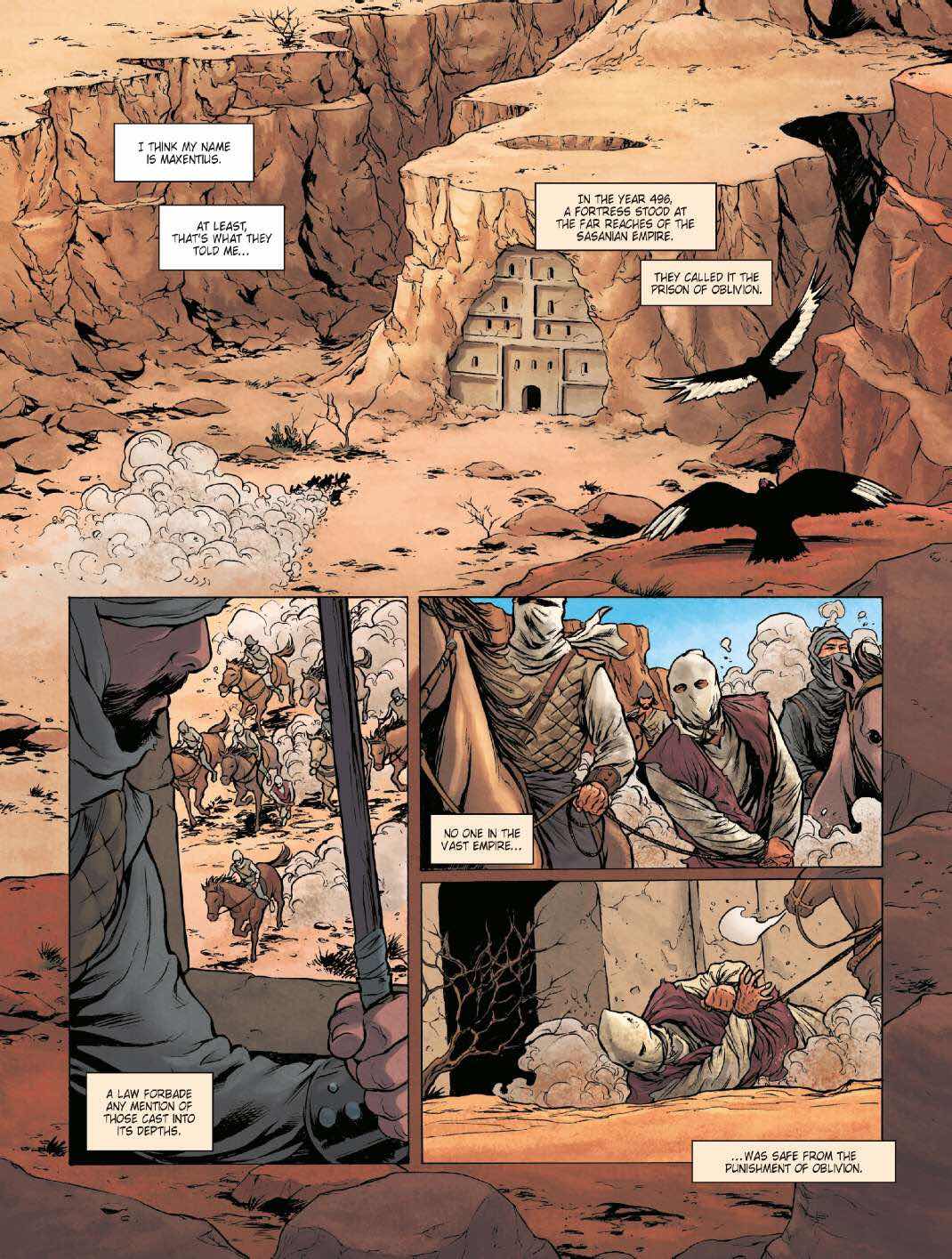 The main story opens on the chariot racing at the Hippodrome arena. As the event is declared open and commences you feel an ever-present cloud of revolution and dissent above the crowd and the dignitaries watching. It is then that you get introduced to Maxentius, our hero. He sits casually in a room behind the high banked seating amongst tigers and lions who pad slowly around him. These wild creatures are respectful and watchful of their master as he carefully sharpens a pair of blades.

Although young in appearance you soon get a more developed look at Maxentius. He is a man of many skills. A trainer at the arena but also a great warrior, a cunning commander and a skilled detective. When a crash occurs in the aforementioned race and subterfuge is suspected he, along with Ofellus his hunchback assistant, discovers a plot involving hollow statues and poison tipped darts. They both walk amongst the spies and informants in the belly of the city. Spreading threats and coins to find out the truth.

The revolt does erupt through Constantinople and is bloody and relentless. A nervous and indecisive Emperor wavers at what to do as ‘The Blue’ fight ‘The Greens’ and rip up the city, setting fire to buildings and the status quo. 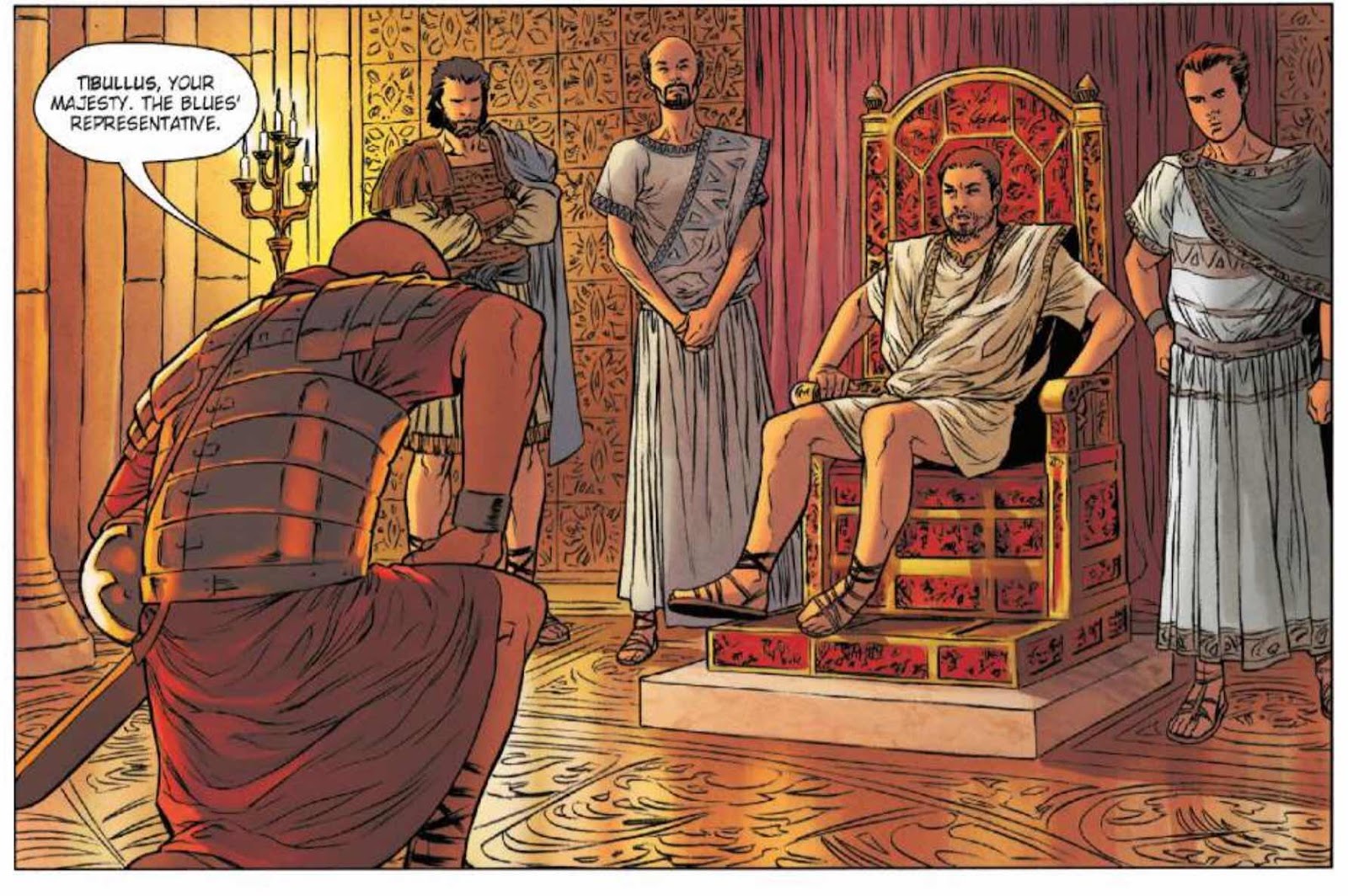 You really cant help but be struck by the parallels of this story with our current messy political and social situations. Whilst historically accurate in politics and setting the blues and greens are like politically motivated eighties football supporters, creating anarchy and violent mayhem. They are divided by a political ideology that blinds them to any form of reconciliation or mutually helpful agreement in a middle ground of their small world. (Ring any bells?)

‘Even the sight of the scriptures didn’t calm them!’

Sardou’s writing cunningly links together all these events with our handsome hero Maxentius at it’s nexus. The book lacks the action early on that you get from other Europe Comics like ‘Ira Dei’ or ‘The Eagles of Rome’ but by the second half has accelerated into full on battles of blood, guts and literally hundreds of people on a page! This slow beginning may be the reason that all three books were made available at once. Like a Netflix box set available for you to consume in one day.

A double page spread in the last few pages of this first volume will genuinely leave you breathless with it’s scope and detail. Duarte is from the school of Euro Comics where no corner is cut and there is gorgeous detail at every page turn. You are never at a loss to discern who is who or what is happening and the colours he lays down alight the pages with glinting sunlight and deep red splattered bloody corpses. It is a delight to read a book with such craftsmanship. 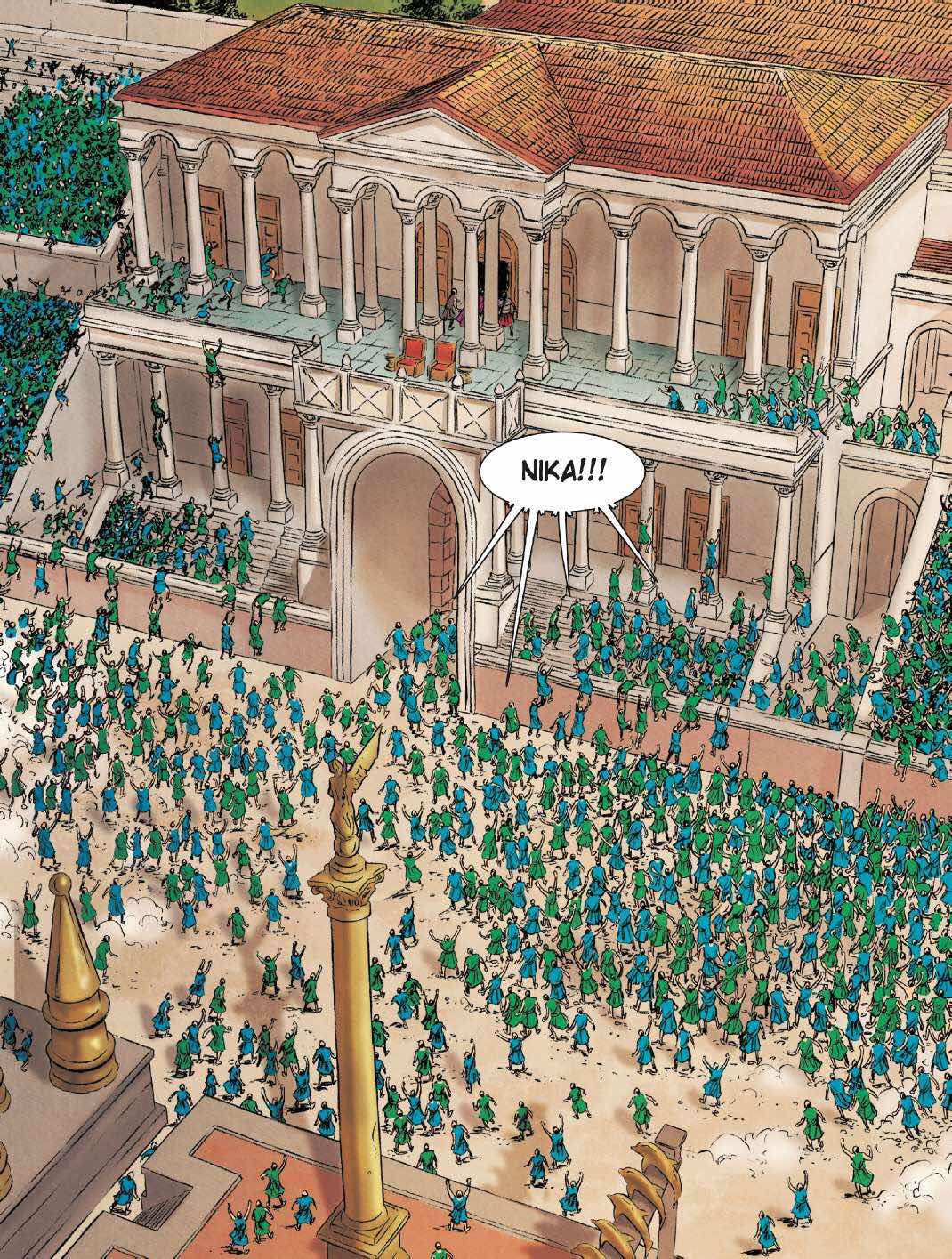 Born in 1974, Romain Sardou comes from a lineage of artists, which includes his father, the singer Michel Sardou; his grandmother, the actress Jackie Sardou; and his grandfather, the actor Fernand Sardou. Passionate about opera from a young age, he got into theater and dropped out of high school in order to dedicate himself to the stage, with the goal of becoming a playwright. After two years in Los Angeles where he wrote stories for children, Sardou came back to France, where he completed his first novel, Pardonnez nos offenses (Editions XO, 2002). This medieval thriller, which is a bestseller in France and was published in 20 countries, was followed by the sequel Délivrez-nous du mal. Maxence (Le Lombard; Maxentius, Europe Comics) is his first foray into the world of comics.

As far back as he can remember, Carlos Rafael Duarte has always drawn. This passion quickly became a fundamental need, and at 18 years old, the Brazilian artist decided to enter the world of professional comics authors. Following his graphic design studies, Duarte studied sequential art at the Impacto Studio of São Paolo. After graduating, the young man opened a new branch of his school in Rio de Janeiro, where he still lives. In parallel, he began working with comics publishers in the United States. His first comic book, Lazarus: Immortal Coils (with the script by Joseph P. Gauthier), was published in 2008. He joined the team of Dabel Brothers, and then Dynamite Comics. Influenced by illustrators such as Jim Lee, Adam Hughes, Terry Dodson, and Adriana Melo, he illustrated his first Franco-Belgian bande dessinée in 2014, Maxence (Le Lombard; Maxentius, Europe Comics). 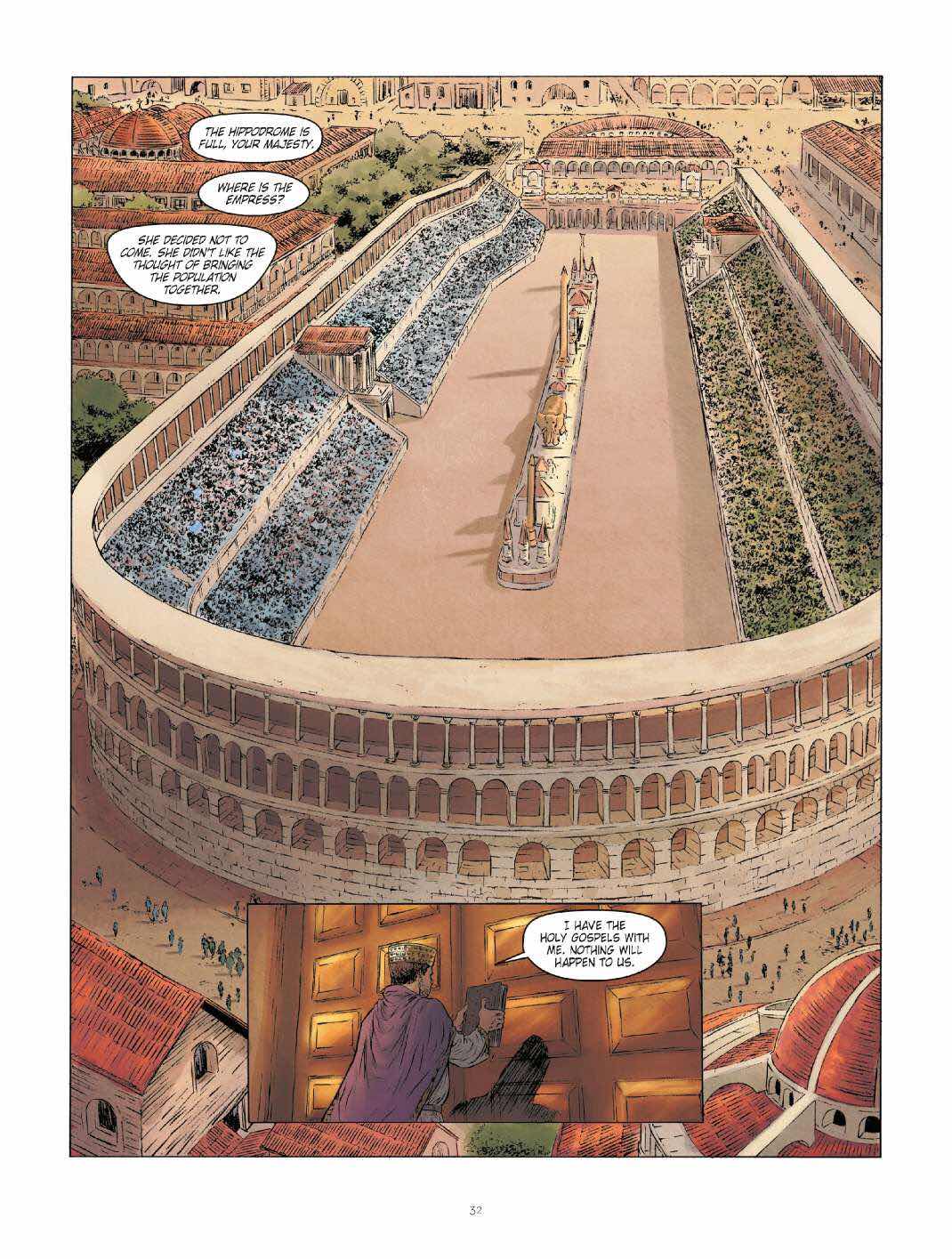 You can head over to http://www.europecomics.com/album/1-nika-revolt/ and order this book or buy it on Comixology here https://www.comixology.co.uk/Maxentius-Vol-1-The-Nika-Revolt/digital-comic/794909?ref=c2VhcmNoL2luZGV4L3RhYmxldC9zbGlkZXJMaXN0L2l0ZW1TbGlkZXI

You can follow Europe Comics on Twitter @EuropeComics and many thanks again to Irina for hooking me up with such amazing books!