In Review - ‘MBC Library Volume One: The Tina Kapplinger Mysteries’ by SJ McCune. 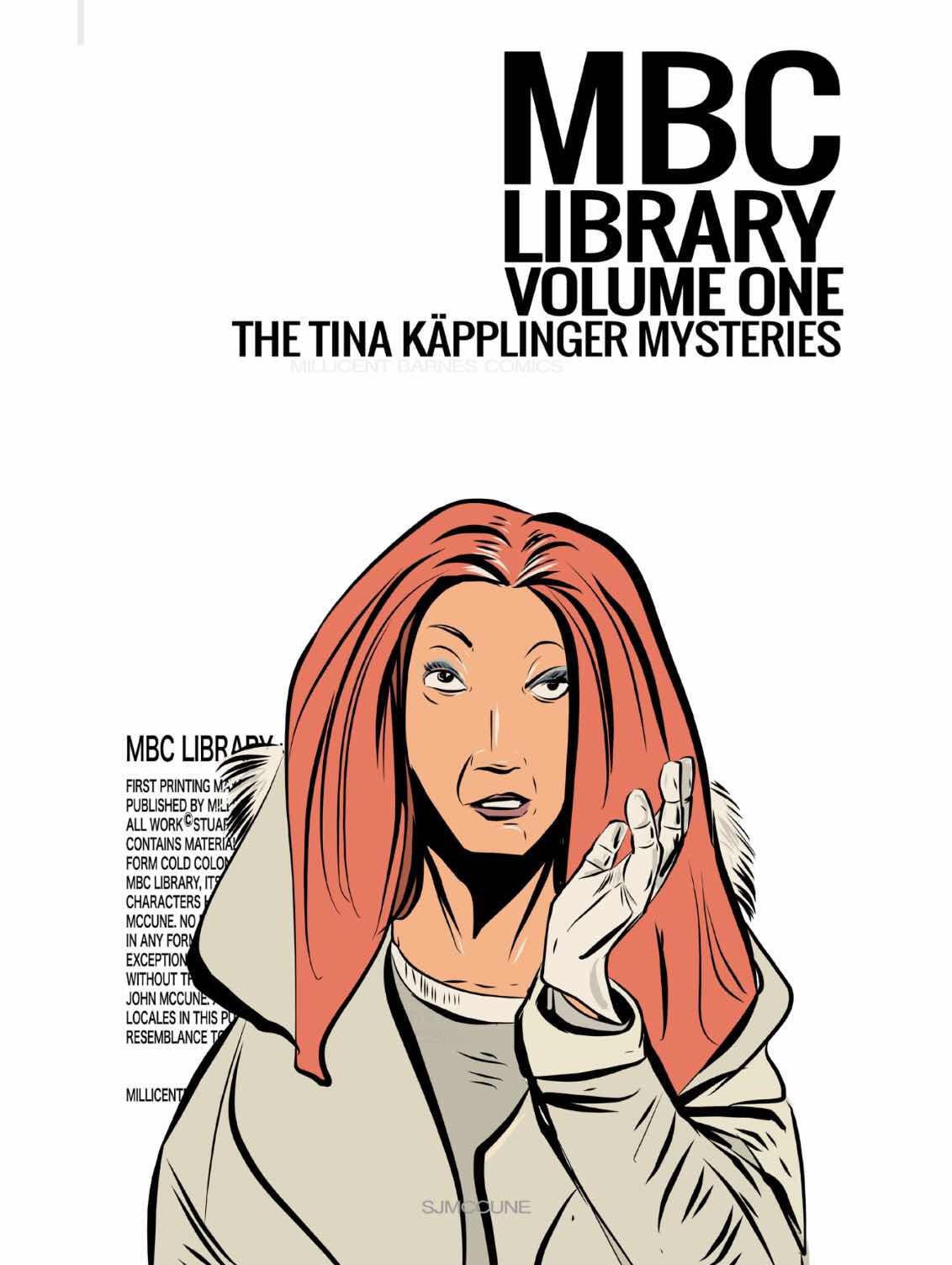 In the words of the creator to start with I think:

‘When creating a comic one of the most important elements to me is that it speaks with it’s own voice. Individually each of the titles must also paradoxically be recognisable as part of my work. This means the comic must have a separate identity test remain within the whole. I think Cold Colony is one of the strongest examples of this paradox which is why it holds this initial volume.’ SJ McCune.

(More about the above later.)

The Story - This is a book of two stories. They are separate entities linked by a strange future and a sternly sexy red haired female protagonist.

The opener has the titular Tina Kapplinger hard at work on the distant exploration work centre Farizuza Cold Colony. ( For the sake of transparency I am forced to admit at this juncture that I consider SJ McCune to be a sneaky so and so and I googled ‘Farizuza’. I got two hits, one for this comic and the second on a Russian dating site. - I am now happily married to a lady called Dominika. I am still presuming that this personal twist is part of the narrative.....?)

Back to the story.

Tina is getting by on a day by day basis in some pretty horrible circumstances. Surviving until she can return home or at the very least leave this Colony. The base is a creepy and unnerving place to say the least. A pair of twins seem somewhat attached to her and tell her about the mouse they have found and now adopted as a companion. This base is bleak and is made seemingly even worse by the arrival of an ‘Enforcer’. These stormtrooperesque characters are to be feared....

As the thumping noise subsides Tina turns around in her bed to find the slightly stalkerish and frightening as fuck looking twins standing over the dead and extremely bloody body of the Enforcer. Tina is called in to assist with the investigation and promised extra rations and benefits if she helps out. But the twist is that the twins are denying the brutal murder and a brief forensic examination would apprear to back them up in this claim.

‘This whole colony has become a locked black room with a killer I can’t see.’

This is a whodunnit drawn in a claustrophobic world of sinister faces. How will it end.....? 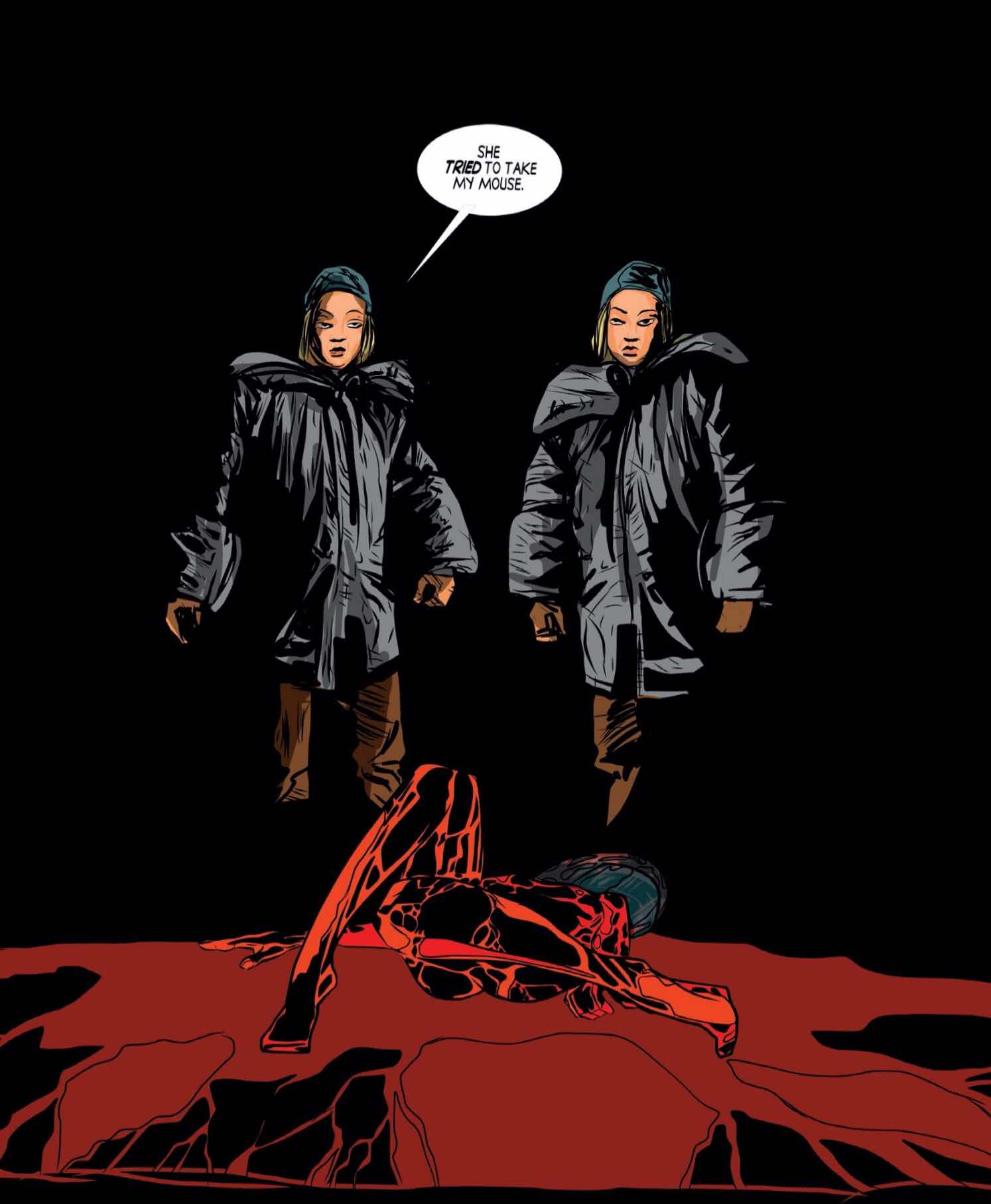 Part two is a another separate story that also features Tina. This one surrounds the disappearance of an explorer. Clues are left in a grainy and garbled video message. It’s this video message that brings Tina back into these games of death and deceit.

The story takes Tina to giant ships and snowy wastes. Whilst the first story took place in the dark interiors of a space station the second story is an action movie that has spent the night shaking and being freaked out on shrooms. 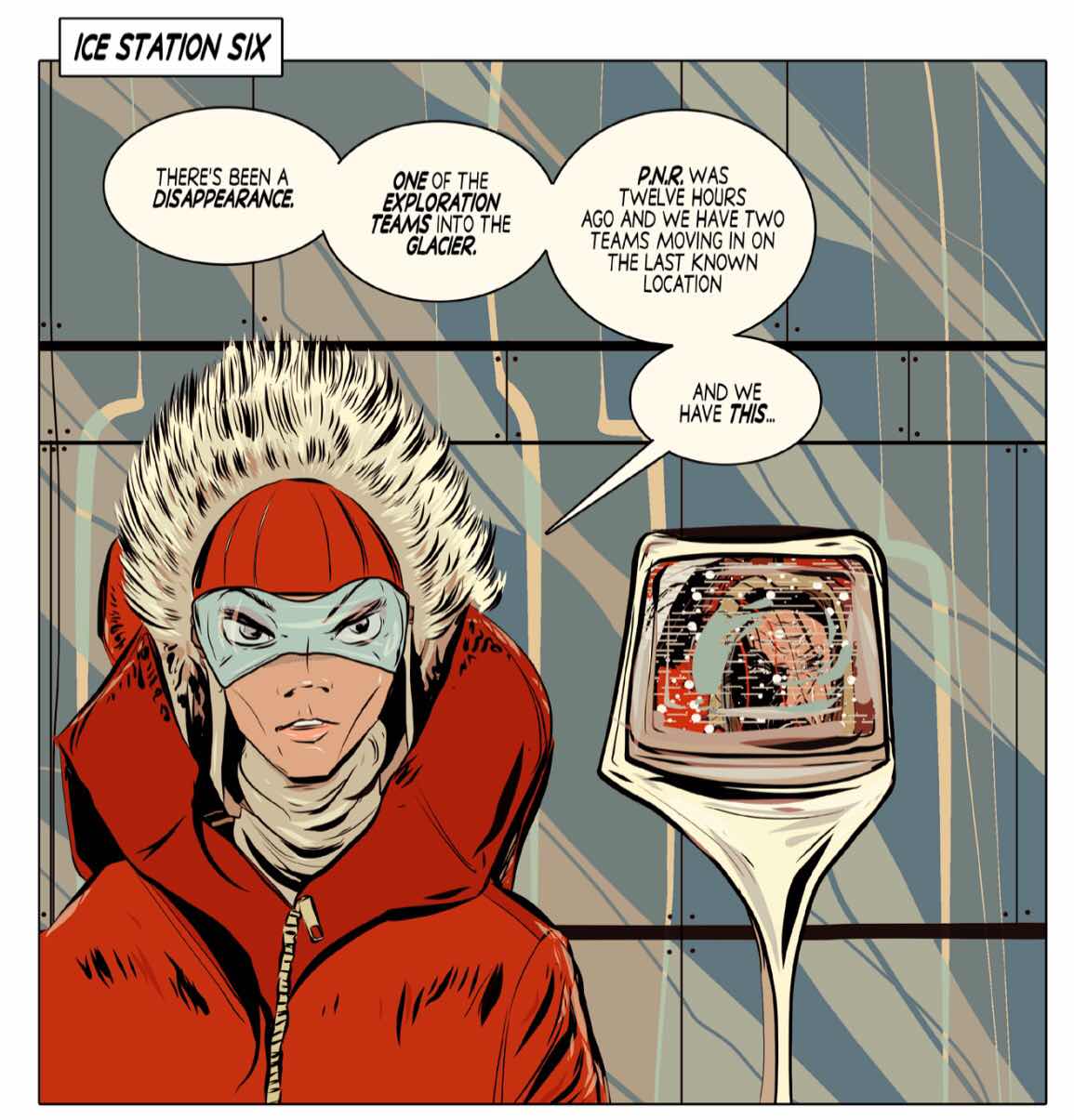 With Mr McCune at the helm where can this possibly be going next?

The Review - As I read this there are numerous themes and visual prompts that are sparking in the back of my mind. Immediately I’m reminded of a Richard Hell lyric as I travel through the pages ‘Observe what the mirror does.’ We see in the female cast of this series the reflection of many emotions staring hypnotically back at us from the face to face images that reach up, looking at us out of the panels. This blank and mysterious female face, full of hidden secrets and distant looks is a motif of much of Stuart’s work and has me thinking again about his introduction. There seems a line between this book and one of his previous series Monologue for example. Much of the story is told in a Cold(ness) of a look, glance and the brutality of that in the shadows violence he uses so well in this volume. It is another book that sends a shiver up your spine.

The characters whilst obviously aloof are also people you worry about as the narrative drives. Will they survive is rarely such a forefront feeling than when I am reading a McCune book. The sharp harshness of the words and the life is cheap attitude is clear on every page, in every dark corner and in every brightly lit landscape. What makes this world so difficult to survive upon? The chaotic nature of this world is seeded with foreboding as new facts and people are introduced. 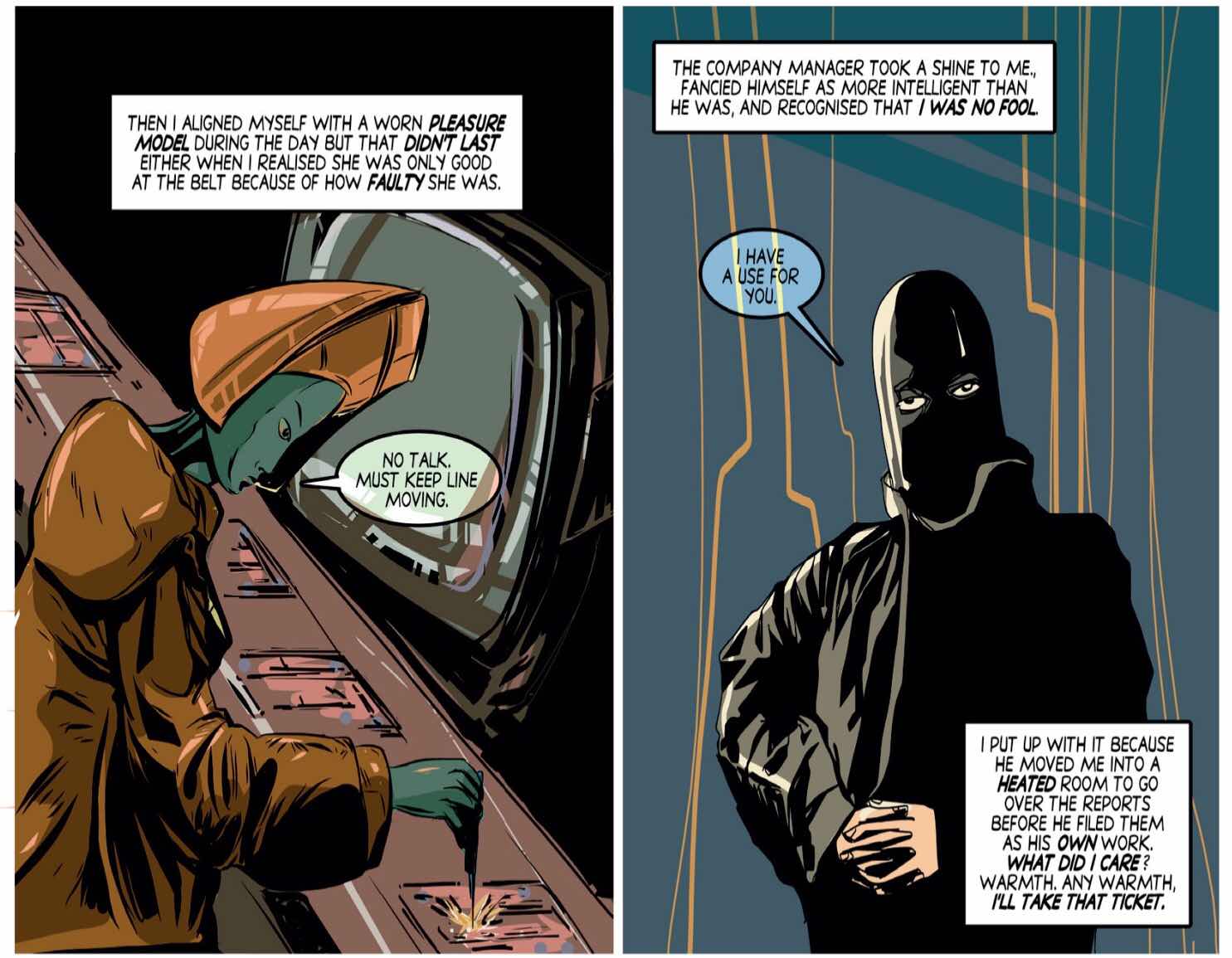 As I read this and other books by McCune I feel that I have passed the ‘End of Times’ signpost. It’s there tattered and broken behind us and all we are doing now is striving to survive. And in that I applaud the storyteller in creating a piece of art that evokes such feelings in this reader. The word ‘haunting’ only goes to underplay such a grandly painted reality. A spark of hope is a rare thing in this universe.

‘We know who you are and we know where you live and we know there is no need to forgive....again’. - Nick Cave and the Bad Seeds. (Told you....)

This is another comic by Mr McCune that I am glad I backed and cannot wait to get through my door. I really enjoy the stories of Tina, you feel that beyond the darkness there is a wry wink from her as she sips some neat scotch at the end of the day. More please.

Beyond the story you get some short text pieces from the creator as well as concept sketches, early pencil work, variant covers and posters. Love that back matter. 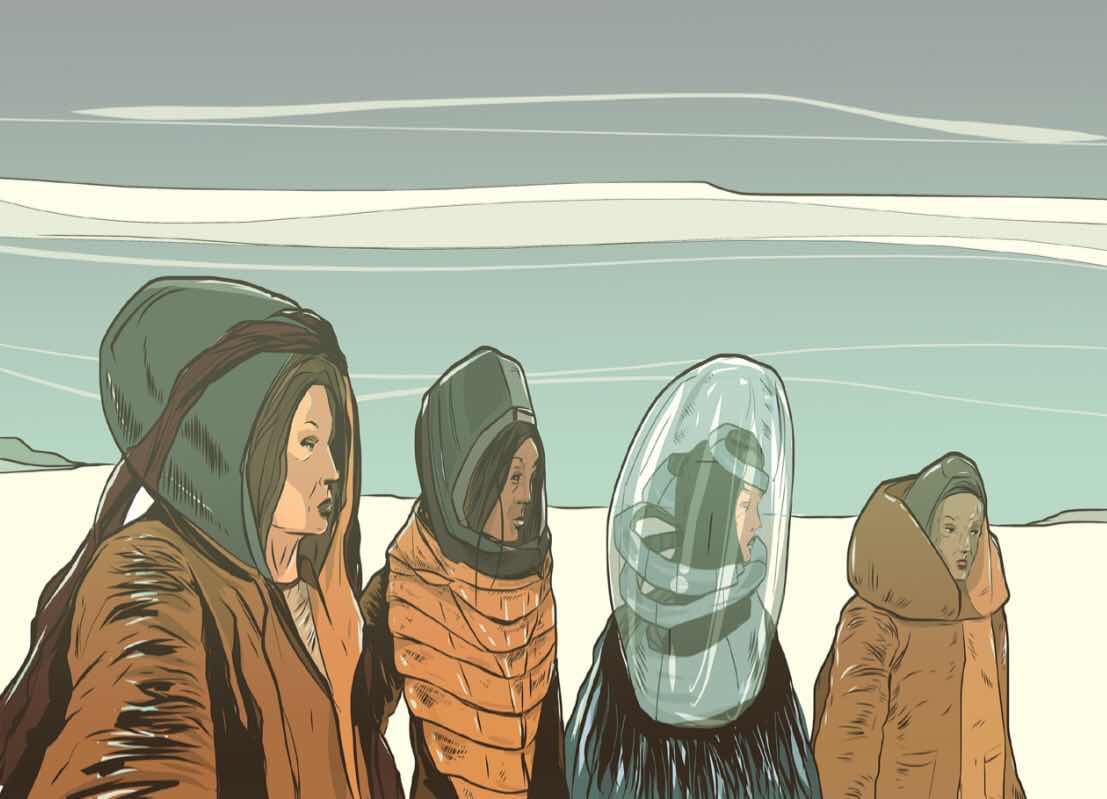 Buy yourself a copy of this and more of this creator's work at www.millicentbarnescomics.bigcartel.com and follow him on Twitter @StuartMcCune