Something that’s a little different this week. Thought rather than the usual review I would tackle an interview. Have fun.

The Adventures of Captain Cosmic: The Mystery of the Missing Planets 1. 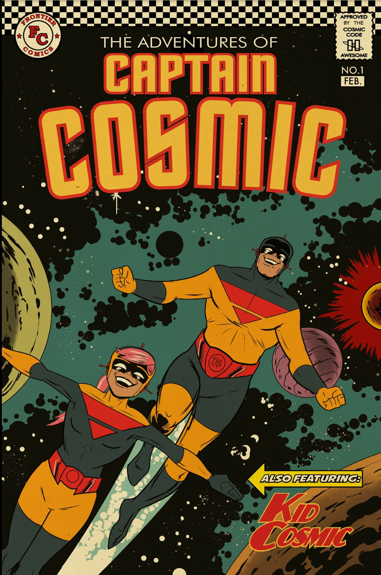 The Story - ‘Entire planets are disappearing and fear is spreading throughout the galaxy. Prime Consoler Zoltan of the Commonwealth of Worlds calls in the only people that can help. The Galaxy Defenders known as Captain Cosmic and Kid Cosmic! Will our cosmic heroes be able to stop whatever menace that has befallen the galaxy and save the day?’

The Review - Sometimes you see the cover to a comic and you know that it’s going to be class. I was busy surfing through the new comics on the Comichaus small press comics app last week when this book caught my eye. I’ve been a fan of Mr Clift’s work for sometime now and anything by him gets a read straightaway. This is easily the best thing he has produced up to this date. It is a glorious mix of upbeat fun and retro style.

The art and dialogue sparks and explodes with a knowing grin like watching Batman The Animated Series crossed with some Space Ghost. It is also a comic that will leave you cheered up and watching for the next issue. The tone is set from a cover that could have come straight off the shelf from a company like Boom or Dynamite Comics but also retains that youthful enthusiasm of Silver Age DC Comics (it even has a chess board header = fucking glorious!)

Andy and I chatted online and I got to ask him a few questions about how Captain Cosmic came into being. Read on Cosmic Chums! 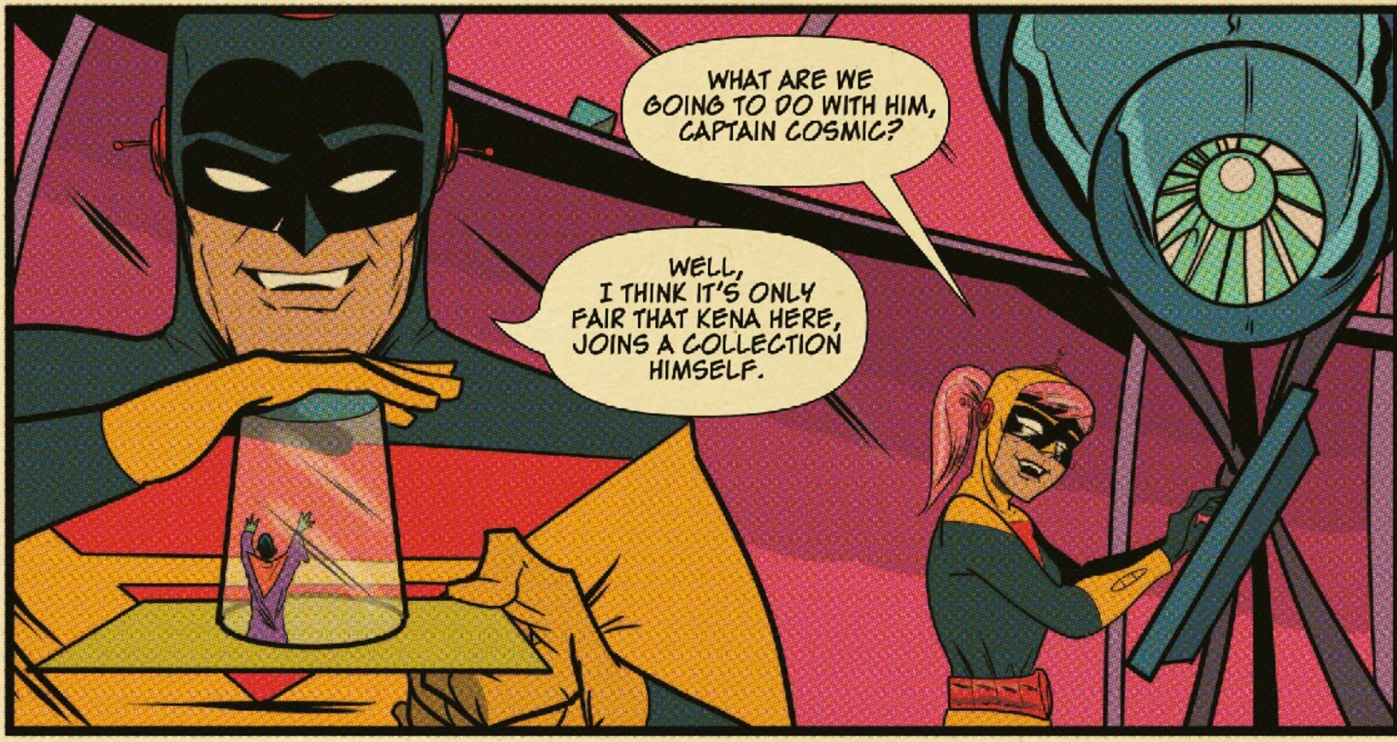 Never Iron Anything (NIA) - Dude, firstly I have got to say that this new series The Adventures of Captain Cosmic is a joy from the style to the dialogue to the colouring. Spot on!

Andy Clift (AC) - Thank you! I very much appreciate that.

NIA - Now. I’ve heard you say that this is somewhat of a homage to Silver Age comics. I’m going to guess at something like World’s Finest or Adam Strange? I’m also going to have a guess at there being some Star Trek in there. Anyone else?

AC - Where to start? World’s Finest for sure. I love those books. Some of those stories are beautifully surreal. I’m always reading a lot of DC Silver Age books: Green Lantern, Flash, Strange Adventures, etc. A lot of classic TV too, Star Trek of course. The Hanna/Barbara Space Ghost cartoons were a big influence on the tone of the book as well. There was just something wonderful about the visual story telling in the 60’s. I also took cues from pulp books. Buck Rogers, Flash Gordon and particularly the Phantom. I love it all. 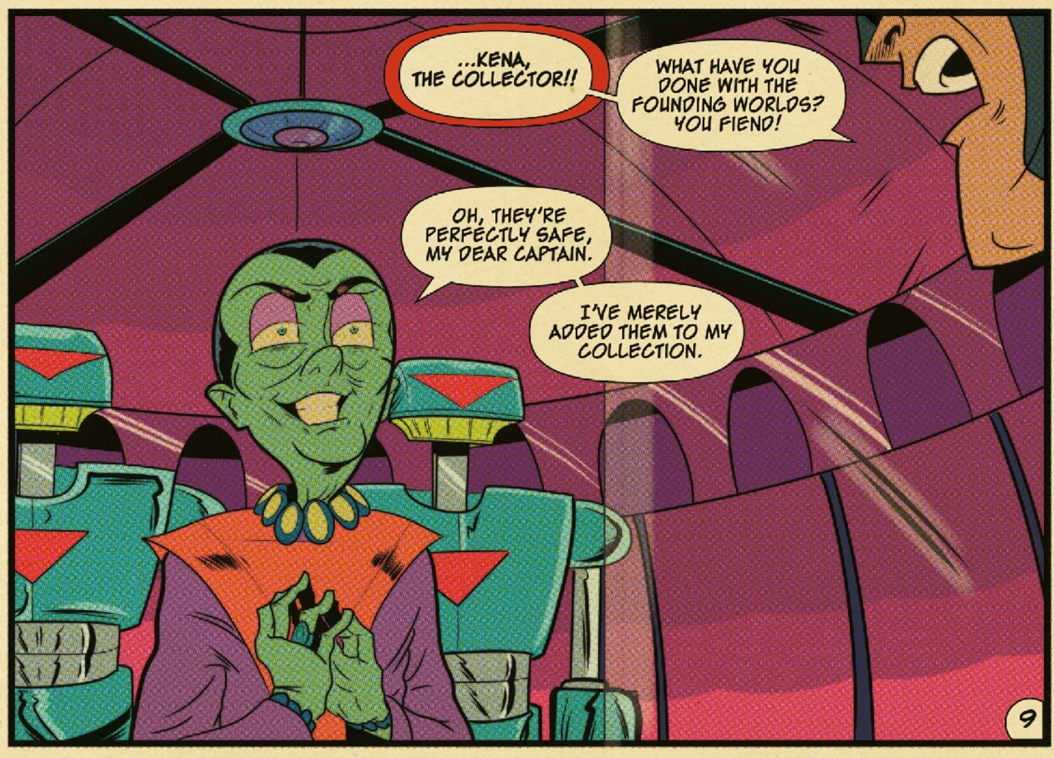 NIA - I’m also going to hazard a guess that you’ve been designing and noodling around this for a while? Did you want to talk about the evolution of the book?

AC - I’ve been working on this, on and off, for around about 2 years from start to finish. It’s gone through a lot of changes, but some core things have always remained the same:

It had to look as authentically silver age as possible.

It had to be all ages.

It was always going to be a Father/Daughter hero team.

I’ve always loved the fact that the mantel of the Phantom was passed down the Walker family line and I hoped to do something similar with Cosmic. It was also very important to me to create a mantel that could be passed from parent to child regardless of gender. This opens up the possibility of future stories a lot

more, while hopefully, appealing to a wider all ages audience. 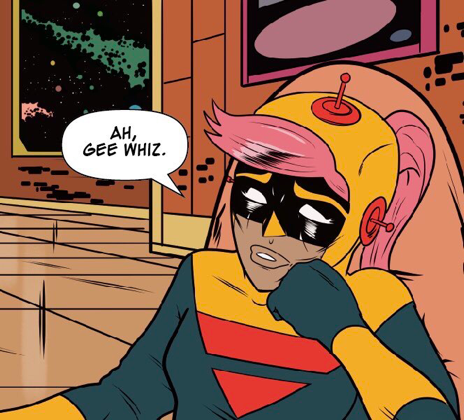 NIA - Since the days of a certain Bear adventurer your art has grown and changed. was there anything you did differently here or any artists you looked to?

AC - Aww thank you. I feel I’ve learnt a lot from all the different projects that I’ve worked on. I did a lot of research and design work for this book, probably more than I’ve done for any other. I think I drew about 5 different fully rendered covers before I found the right one. I did a lot of colour tests as well, to make sure the palette was right. Jack Kirby, Darwyn Cooke, Bruce Timm, Alex Toth and Mike Allred are always my go to artists for inspiration. But specifically, I read at a lot of Dick Sprang and Curt Swan. I don’t think anybody draws happy Superheroes like those two, their work is just a joy.

NIA - The design has a real retro feel all the way down to the back matter and page tints.

AC - The look of the book is every bit as important as the story. I wanted it to feel authentic to the era, so the reader felt like they were reading a silver age comic book. I researched and replicated as much of that as I could, while also trying to keep my own stamp on the book.

NIA - The tone is also unashamedly enthusiastic and cheerful. Something that you felt we needed at the moment? I keep hearing Adam West in my head as I read.

AC - Very much so. I’ve always felt that Superheroes are meant to inspire us to be better and as much as I enjoy realistic, gritty stories, I think we could all use some happy, positive and even cheesy stories at the moment. There’s certainly some Adam West Batman in Cosmic, for sure.

NIA - It’s currently available on the Comichaus app. Any plans to real ease a physical copy? And when are we getting issue 2?

AC - I’m hoping to kickstart a small print run for issue 1 next month, which I’m very excited about. I’m hoping to have issue 2 ready for some time in the summer. I’ve already plotted it out.

NIA - Any chance or a Robox 5 mini series/one shot?

AC - I’d love that! Yeah, I think I’m going to have to that. Maybe a page or two in the back of issue 2, like they used to do with Action Comics.

NIA - Thanks so much Andy. Much appreciated.

Genuinely. This is a new series that you will enjoy and leave with a big smile on your face. It is clearly created with love for those Kirby days of outrageous spaceships and bold and grinning superheroes. Highly recommended. Or as I put it in a recent social media post:

‘Oh Clift! You clever bastard you!’

Find out more about Andy, his art and this new series at www.awclift.co.uk or Follow him on Twitter @andyWclift