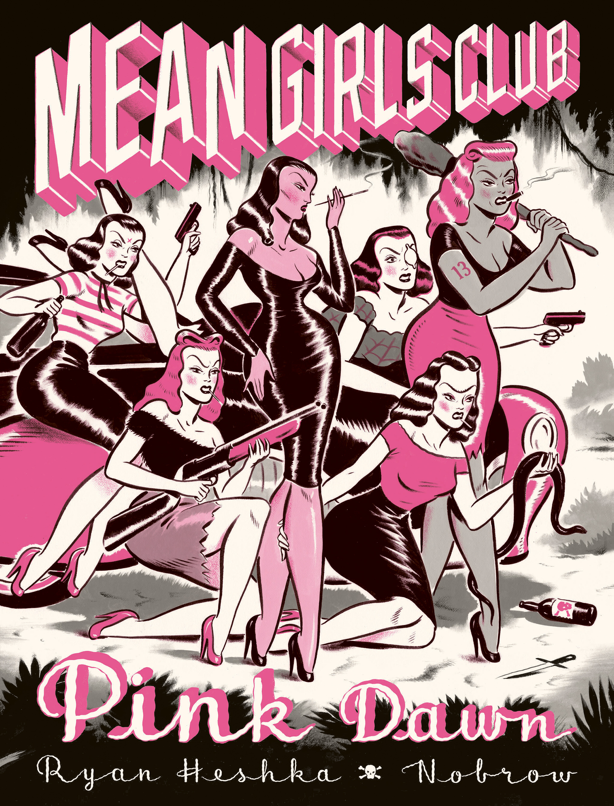 The Story - ‘The lascivious ladies of the Mean Girls Club have been raising a riot around town, and the cops are onto them. Prepare for a mad-dash of boozing, skull busting, and general mid-century mayhem as they deliver a swift stiletto-stab to the crotch of the patriarchy,’ 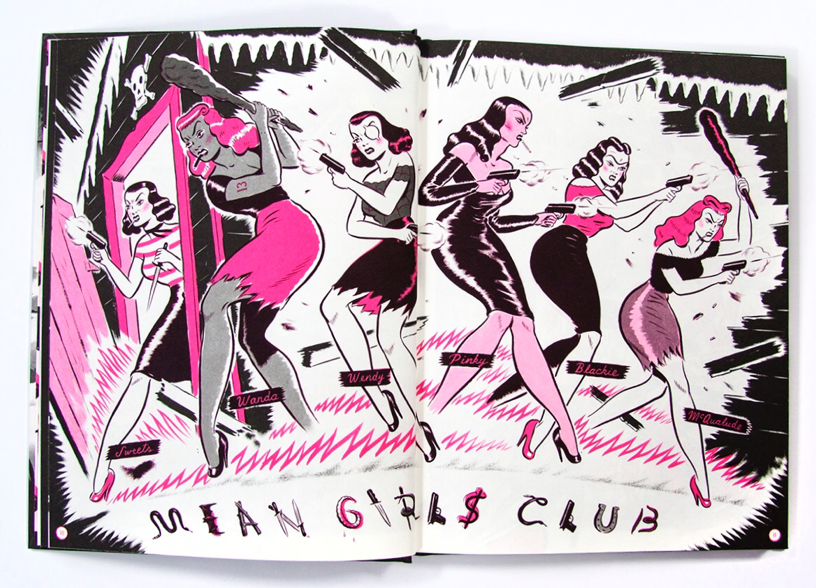 The Review - I’ve been waiting to read this book that represents a terrible example on behaviour and language to the youth of today. I loved the original comic that came out as part of Nobrow’s 17x23 series of titles and this does not disappoint! A comic that fails to discourage acts of violence and cruelty but is done with retro cool. Count me in!

‘A clam, hey? Well, my girls will make these donut holes sing!’

Who can deny that a comic that contains phrases like ‘Fuck Balls’ or ‘Beat these mystery turds down!’ could possibly fail to be great! Ryan has taken what he did as a much shorter form story in the preceding version of this series and cranked it up in all areas. It lampoons everything including its own sharpened wit.

The Mean Girls with tight skirts, preened baby doll make-up, the odd eye patch and tattoo and a variety of weapons that include shotguns, knives, bats and even snakes take on the establishment. Red faced and obese Mayor Schlomo is a Southern Fried bacon eating alternative Dick Tracy villain and as soon as he appears you know that the Meanies will be beating his fat ass!

McQualude, Wendy, Wanda, Sweets, Blackie and all the rest are rude and prone to sudden acts of vengeance and larceny but you also get some origin stories in this volume and a little of what motivates them. They’ve all been wronged in some way and that’s what has made them so ‘Mean’. A car mechanic with a bed-ridden Gramps turns up by accident and lost near to the club-house and after proving herself in a fight with one of the gang looks like she is the new member but will she make the grade? Will she turn on her new sisters?

Throughout this the plot thickens. Will the corrupt Mayor, the bent police and the abusive church members stop the girls from taking over the town? Who will end up as the bacon?

‘Holy Fuckballs! She kicked Wanda square in the sausage grinder!’

The art returns to that stylistic choice of black and white with a grey wash and that stark pink. The women are glamorously and hilariously often cliches of the 1950s/early 1960s period it is set within. The men come of less well and are grotesquely designed to amp up the razor sharp satire. 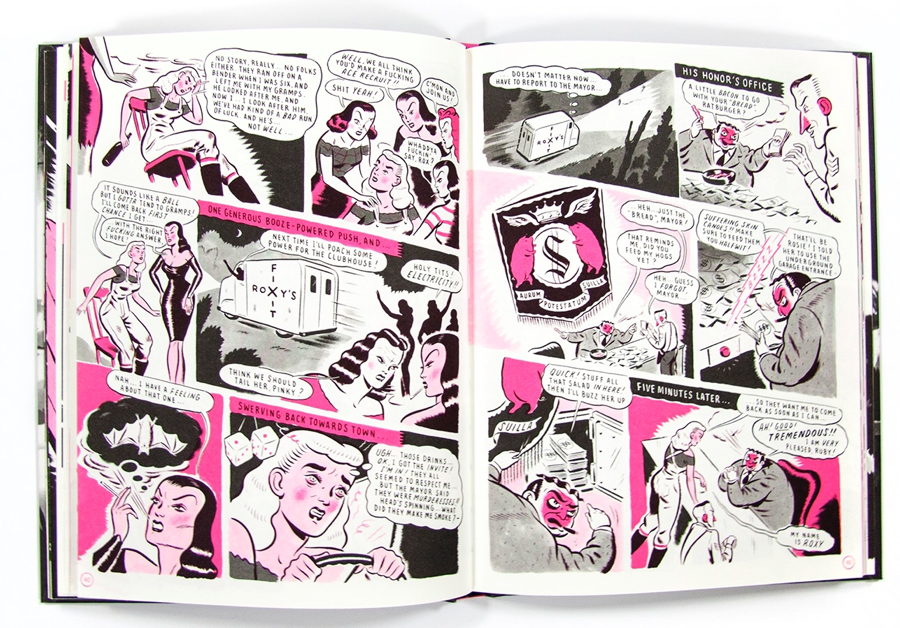 Ryan has totally kept the anarchy fuelled, trippy and retro feel of the original comic and elaborated on these characters. This is much better suited to a longer exploration that the 17x23 comic hinted towards in my humble opinion. This 100 page volume gives you that bigger meal you wanted after the last tease. You get a comix style cartoon of a book that is done with some magnificently over the top everything. You cheer for these under dog gang members who you find out are not totally without morals.

‘Wait for the muzzle flashes, Wendy! Then aim to maim!’

Each burlesque Betty Boop caricature is crossed with that Lady Snowblood/Faster Pussycat, Kill! Kill! aesthetic and then drops of lysergic acid are catapulted into your eyes as you read. They stir up the crazy and everywhere they go bullets, booze, uppers, downers, wild animals, violence and general mayhem follows. The skirts are tight and the low cut tops are actually so tight that you think Lola Lollabrigida is gonna turn up and bash some melons too. I’d have been a much bigger fan of Dick Tracy growing up if it had these elements!

A subversive treat that combines bizarrely unsettlingly images and dialogue with diabolically hilarious satirical commentary on modern society and it’s snowflake attitudes. I would love to see this adapted for TV or movies but I’m not sure who has the pair of bollocks to do it (other sexual organs are obviously preferred!) Russ Meyer was never this great!

Once again Nobrow have pulled out all the stops and this is a beautiful book from a design point of view. Presented in a gorgeous wrap around image on the cover with some excellently realised period/tone/story specific little extra flourishes on the end/title pages. And only £14.99! That’s a price that a lot of the comics industry should be paying attention to!

Spread the word of The Mean Girls Club!

Have a look at some brilliantly strange and often a tiny bit daft art of the creator at www.ryanheshka.com