Hi. As it's the weekend I thought that we could have another from the read pile that has mounted up over the years and deserves hacking back.

Again this one was a random choice from some books that I have not got around to reading. 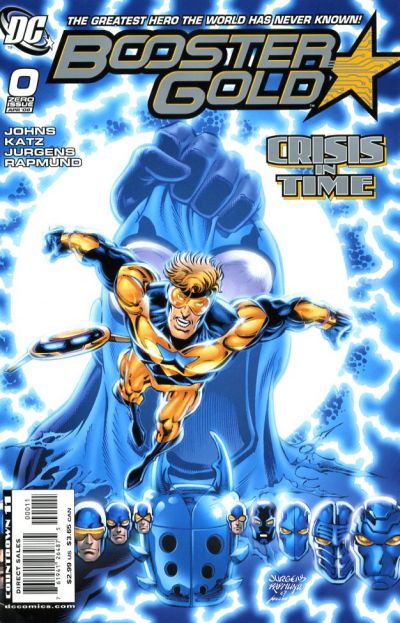 First off this is a great design for a cover.  It has a great iconic image and the colouring looks great. Done in the Booster blue and gold with the silver lettering. The production on it is pure DC, nobody else could be this brash and obvious yet somehow pull it off.

Jurgens kills it on this book. On Booster Gold (a character that he created) I can think of no better artist. His line (with assist from Norm Rapmund who seems uncharacteristically restraiuned compared to his recent DC New 52 work on Teen Titans) is crisp and controlled and is pure classic DC storytelling. Jergens lacks the huge stylistic flourishes of other artists but makes up for it with superb posing and clean images. His work is akin to the 'house style' at DC of the last couple of decades. He can easily sit at a table with Perez and Garcia-Lopez. I personally loved his Superman work and it fits well with this brighter side of the DC Comics Universe.

The story opens with Booster Gold and a mess of Blue Beetles all wrangled into a time paradox situation (a theme that seems a constant in this title - at least it was every time that I picked it up). Booster has travelled back to rescue his pal Ted Kord (the 1980s Justice League Blue Beetle) from being murdered by Maxwell Lord. (A big time timey no, no!)

They are travelling in a time travelling bubble when they get in a scrap with the Zero Hour era Parallex and Extent. With a lot of discussion/explainy pages as well. A fight breaks out and the Beetles and Booster escape. But Parallex and Extent manage to send the group to the 25th Century. As this is a zero issue there is then a kind of origin thing with Booster and a thrown football game his father has set up. We get a moment with his sister who was later to become the hero Goldstar. (shit this is confusing!)

We get an attempted theft and a battle with Skeets and a load of other robots. They eventually escape and say their goodbyes and Booster and Ted Kord return to the present (yup still no roads). It's all fucked up however as apparently the time stream has been affected and the world is full of new style OMACs.

Above is a slightly long summary than I normally give but I am sure that you can see why. I can only think that Geoff Johns loves time travel stories 'cos this one is never ending. I have to say that it is fun in the most part and typical of John's style of this period.

In the normal Booster mixture of Superman and Back to the Future it is a little straight and lacks edge. But that is what you expect with this title. It's not mean't to offend. It looks great. It twists and turns and snowballs at the right moments and I am sure is all ages friendly.