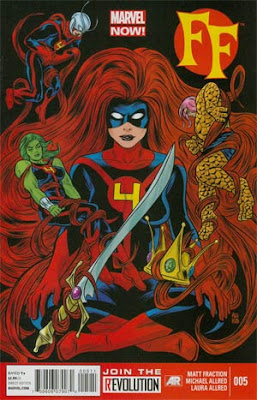 The idea is sound. The Fantastic Four are out in space adventuring and they have left the Fantastic Kids and the planet in the hands of Ant Man, She Hulk, Medusa and a lady in a Thing suit (Darla Deering aka Ms Thing - yeah I know). It's not going well and a Johnny Storm from the future/alternative reality with grey hair and one eye has appeared and is going a bit mental threatening to burn the city down.

Then a big monster appears. And something with something else. (Dunno.)

Matt Fraction is a hot writer at the moment and just this week his Hawkeye series has got him a couple of Eisner nominations.

Mike Allred is a cooler than cool artist who has been pinched from DC (kind of) and is putting the books out regularly. His work in the past such as Mad Man has been some if my favourite stuff artistically.

But somehow this series doesn't work. It has all of Fraction's trademarks. It tries too hard to be cool. It often is a series of moments that the writer thinks are funny or smart and it tends to wander.

Fraction is (rightly so) a big Allred fan (as should we all be). But he seems to allow for flourishes that seem stylistically too extreme. For example the photographer with the old school 1930s camera took me right out of the story. The interactions between characters don't really gel for me. Scott Lang seems to alternate from a grinning blunderer to a man with too much weight on his shoulders.

Allred's pop art influences are beautiful to stare at but as part of a sequential flow they fail me. I am taken out of the story too many times because the art seems too frozen in time, too static. The jump between may of the panels seems a little jarring. Flashes between the images often fail the storytelling.

Mr Fraction seems to write his pacing badly. Moments are written that appear to me to be for that seconds worth of cuteness or a joke. They don't appear part of the storyline or even in line with each character who is involved.

Remember when they did a comedy What If? Issue and it was full of page stories that joke about with different characters? 'What If Thor cut his hair' or 'What If? Daredevil could see?' All that sorta crap. This is what this issue reminds me of. Moments. Not a story. (and kinda unfunny). 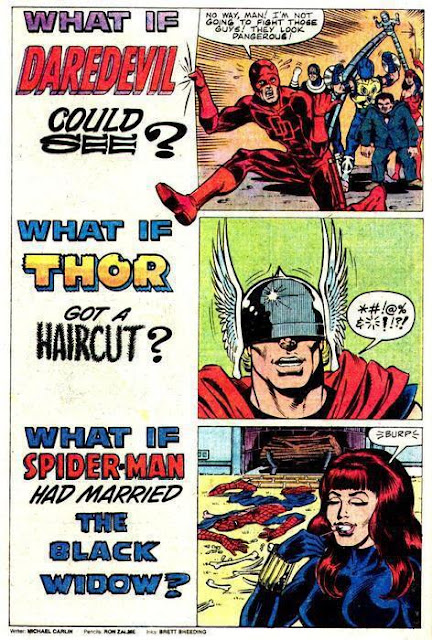 Kind of harsh I know. But when I saw the above page online this morning it straightaway reminded me on the FF book.

A low point was the multi panel page of Dragon Man and Ms Thing trying different head gear on. It was just there as a gag seemingly, and a not very funny one to boot. In fact it was like a joke with the funny bit taken out.

There needs to be more story and more flow. Because at the moment it reads like an unfunny issue of Mad Magazine.

Mr Fraction who I am sure is a clever guy needs to stop telling us he is. The Ernie Kovacs reference (who i had to google - probably because I am in the UK, but sad as I am a life long comics reader) is an example of this. It feels like it panders to style junkies on a lot of the pages.

This series looks cool. It's witty and charming (to a point). But it seems ultimately shallow and uninvolving. I don't get any real emotional depth and this is what I am looking for in comics today.  It's just a personal feeling and I am sure that a lot of readers will like it. It's just not for me.