For those new to the blog this one is by the Boy Wonder.  His true identity is that of a 15 year old (almost 16!) who is both my son (lucky sod) and a comics reader (yay).

On and off (more off these days) I get him to do a review for the page. It's just interesting to see what the 'yoof' of today think about our favourite medium. 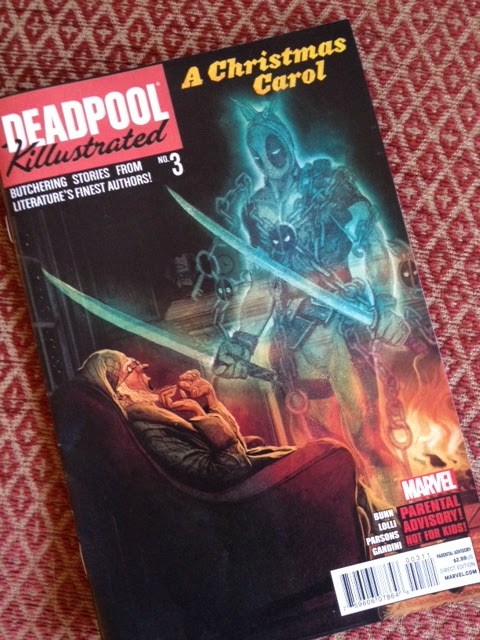 This is the story of Deadpool trying to kill off everyone who is involved in the comics world by killing off those who inspired it. These include Scrooge, Frankenstein, Captain Nemo, the Little Mermaid and a series of characters from The Jungle Book.

The comic is very bloody and violent. Deadpool blows people up and at one point straps someone to a torpedo which he then fires at a mermaid. That is cool!

He also puts his own brain into Frankenstein's Monster. Anarchy as always.

'I dug it out myself with a spork.'

This comic has everything that I like in the character.

The writing is great and the art is not excessively detailed but good and exactly where it needs to be.

Overall I really liked this issue and am really enjoying all the Marvel Deadpool comics.