Well You Should Be! (Avengers Academy).

First of a semi regular post on books that you should be reading.

This book sprang out of the Dark Reign event at Marvel that had Norman Osborn take over the USA and a year long series of sinister machinations that lead to his fall in the Siege event after he finally overextended his reach and attempted to take down Asgard.

What followed on from the Dark Reign was a loosely linked event in many of Marvel's books called the Heroic Age.  It seemed to attempt to wipe the slate clean. Steve Rogers arrived back and the MU seemed to be a brighter more hero friendly place.  Many of their books got a relauch or a redirect.  The biggest success (both critically and financially) was the relaunch of the Avengers titles.  We got Avengers, Secret Avengers and New Avengers as well as a great new direction on Thunderbolts.

The real gem to come out of the shake up in my opinion was Avengers Academy. 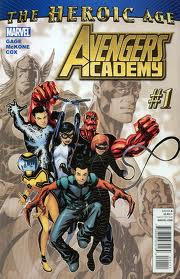 It follows the progress of six teenagers who had been manipulated and tortured by Norman Osborn's Dark Reign.  He had attempted to start them on a road to villainy.

Finesse, Hazmat, Mettle, Veil, Reptil and Striker are then taken into an Academy run by Hank Pym  who was at the time going by the name Wasp (which he has thankfully dropped and is now back as Giant Man) and a handful of other second string Avengers that include Tigra, Speedball, Quicksilver, Jocasta and Justice.
The twist comes in the storyline quite early on (half way through issue 1 in fact) when you realise that they are being trained not because they will make great Avengers but that they may well turn into super villains.

So what we have here is not The New Mutants or the Teen Titans but a book that on the surface seems that way but is in fact a book about manipulation, dark character interplay and a discourse on the nature of personal choice against the sea of fate.

It's first handful of issues take care in exploring the different facets of each character.  In a similar way to how John Byrne's Alpha Flight and Keith Giffen's and Paul Levitz's Legion of Super-Heroes in the 1980s focused in on an individual character in spotlight issues the writers of Avengers Academy have done the same.  Each student (as well as each tuttor) have been shown to be fallable and to have been manipulated in one way or another.   Nobody seems ancillary.  Everyone has a singular voice and a bus load of motivations.

One of the most interesting of arcs at the moment is the realtionship between Finesse (who may or may not be the daughter of Taskmaster and has similar powers) and her teacher Quicksilver.  Finesse has quickly realised that as the son of Magneto and a sometimes villain Pietro (Quicksilver) can be the source of some very useful infornation that would clearly be frowned upon by the other Avengers.  She is part blackmailing and part vamping him to get what she wants.

To me probably the high point of the book so far is the incident around Tigra who is acting as a teacher at the school.  This story is in my opinion more than it seems.  The history of this particular strand is that back during Dark Reign she suffered a terrible beting by the Hood and his gang.  This was videoed and we find out that the incident has been posted on YouTube.  The students see this and take revenge on the Hood and being the kids that they may become we see this sinister act again as they have videoed it themselves.  Tigra (as she is an upstanding Avenger) takes the students aside and they get a huge bollocking that almost results in some of them being expelled.  OK so far?  Quite understandable for a Marvel book so far?

But then something very interesting happens.  The end of the issue flashes to Tigra's room and she is watching the beating they dished out on the video that they took.  See what I mean now?

Now what does this say?  What does this say about victims of crime?  Surely the writer is making the sexual assault analogy?  I genuinely belive that this four colour comic says more about the nature of justice as a concept than the whole first chapter of The Republic by Plato.  Is it justice?  Is it wrong?  We see that the students are slipping in to a dark place.  Does this mean that they are becoming those super villains that we fear that they may well become or are they in doing what they consider to be the right thing becoming the heroes that we hope they can be?  Is what they did right?  Was it motivated by rage?  Was it motivated by revenge (lets face it they are after all called the Avengers).

How does this act speak to our duty to help the victim's of such violent crimes?  Tigra is a strong female character (albeit with that overtly sexual fanboy side) she can hold her own and since Civil War she has really become a character that I enjoy reading.  Does the beating rectify her injuries or does it compound them?  How does such justice fit in to the modern world as well as the MU?  How can revenge be a noble motivation?

The only real answer that I have is that a book that raises so many questions about it's characters makes for a great reading experience. Everything will continue to effect the metamorphosis of the players.  This seems not just limited to the students but the teachers have issues that require fixing too.

Other storylines of real note are the Scared Straight issues where it crossed over with the Thunderbolts and the issue where Finesse goes searching for her father Taskmaster.  Both do not take the obvious turns and only go to deepen the fatalistic hole that these people are falling into.

The art in the book is great as we have come to expect from Mike McKone.  It is this consistent style that improves the reading experience.

Christos Gage writes the fuck out of it and I look forward to each and every issue.  If you are not reading it you should be!

There is one trade out at the moment Avengers Academy:Permanent Record that collects issues 1 - 6 and the scond trade is due out in June.  Well worth your money.
Posted by Tony Ez Esmond at 02:24 No comments: 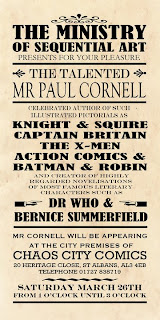 This should be a great signing with Paul Cornell who is white hot at the moment after the success of Captain Britain and MI:13 (well critical success anyway). He is currently kicking the fuck out of it with Action Comics and Knight and Squire and so much more.

He also wrote some of the best recent Doctor Who with Family of Blood and Father's Day.  A personal favourite of mine was the novel Human Nature from the New Adventures Doctor Who novels of the 1990s.  He has also written for the new BBC Robin Hood series and Primeval.

So get down to Chaos City Comics in St Albans, Herts.

Also well worthy of note is that Paul is also currently growing a beard for the UK charity Shelter here in the UK.  So you might also be able to donate to a worthy cause. 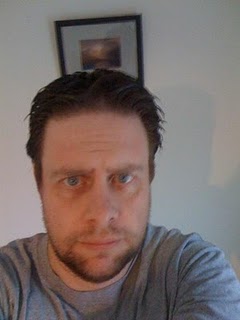 To make a donation (as I shall be - although I won't be growing the beard as I already have one) pop over to the below link.  How many times have you walked past a homeless person in Central London and felt guilty about not helping.  Well guess what fuckos - now you can.

So come on down to the event.  Should be fun.  (Mention The Sky at Night and you may be pals forever). 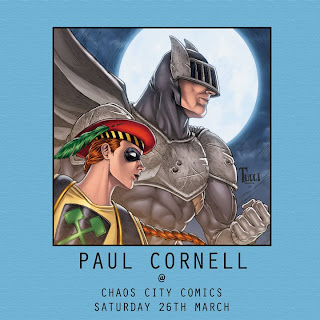 PS We may well go for a beer afterwards!
Posted by Tony Ez Esmond at 12:08 No comments: