Hey everyone. Now that I am in post at Nobrow and Flying Eye I'm doing the rounds of some of the UK's Comic Conventions and having a nose to see if they are worth tabling at in the future. After a brief retirement I was lucky enough to be hired by this excellent comics publisher and am loving every single minute. 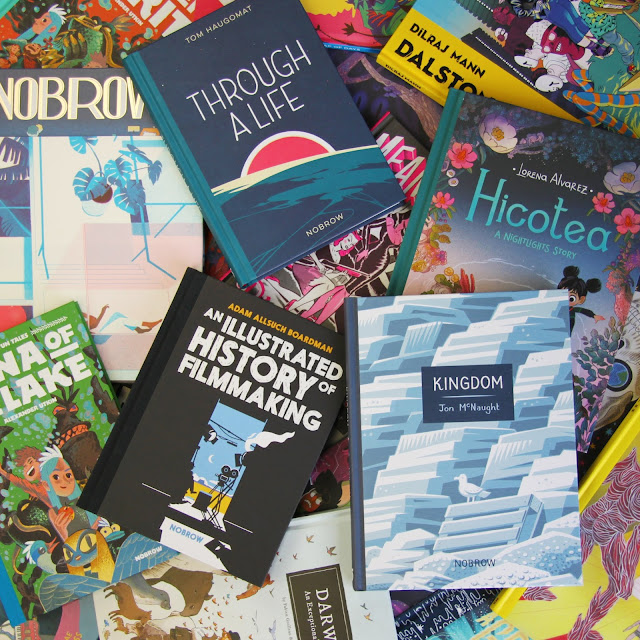 Next up I am excited to be travelling north of the border to Glasgow Comic Con. An event that has been running from 2011 and goes from strength to strength!

I'll be visiting as a punter but will have a car boot full of our books to show about and sell if you want to pre-order from me. May I highly recommend 'In Waves' from AJ Dungo, 'Kingdom' from Jon McNaught and 'Skip' from Molly Mendoza. All are absolute corkers. I might even have some of those most sought after Hilda Dolls!

I'll also be repping The Awesome Comics Podcast and looking forward to meeting all the Small Press Mafia and grabbing some interviews. If you have something new dropping then please let me know in advance and I'll come find you. 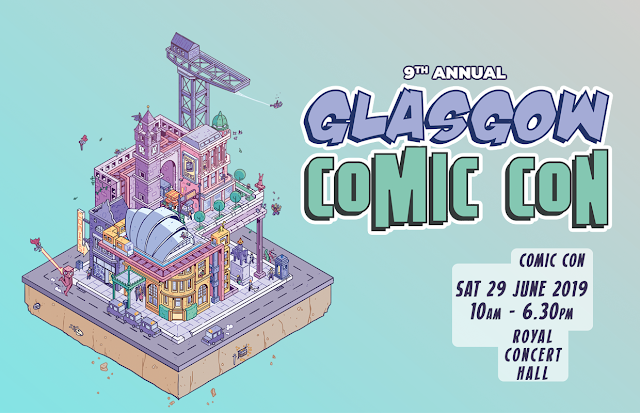 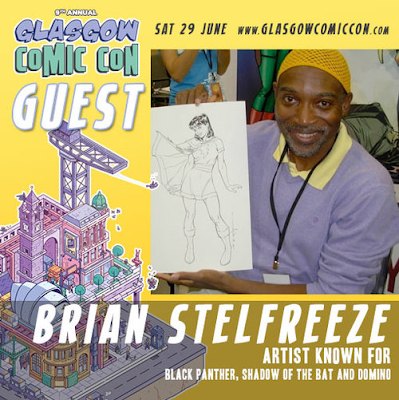 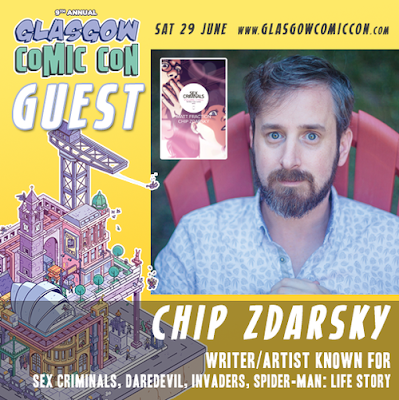 Here's the link to the event:

You can book tickets (I think there are just a few left) here https://www.eventbrite.co.uk/e/glasgow-comic-con-tickets-53543326531

No I ain't eating your so-called 'Square Sausage'.

Many thanks for reading!
Posted by Tony Ez Esmond at 08:50 No comments:

I’m finding that Convention Season is back in my life and my diary. I’m now in place as Events Rep at the mighty Nobrow and will be touring the UK representing this excellent company in the coming weeks, months and years. The schedule is already looking busy in June and July so I thought I’d highlight a few that I’ll be visiting for a little look around at or tabling and selling.
Pop over to the site and have a look at what’s out and what we have coming soon (cough, cough - NEW HILDA!) https://nobrow.net/
If I don’t have a table and you want one of our books for yourself or your store then let me know in advance and I’ll bring a copy along.
First up is MaccPow in Macclesfield. 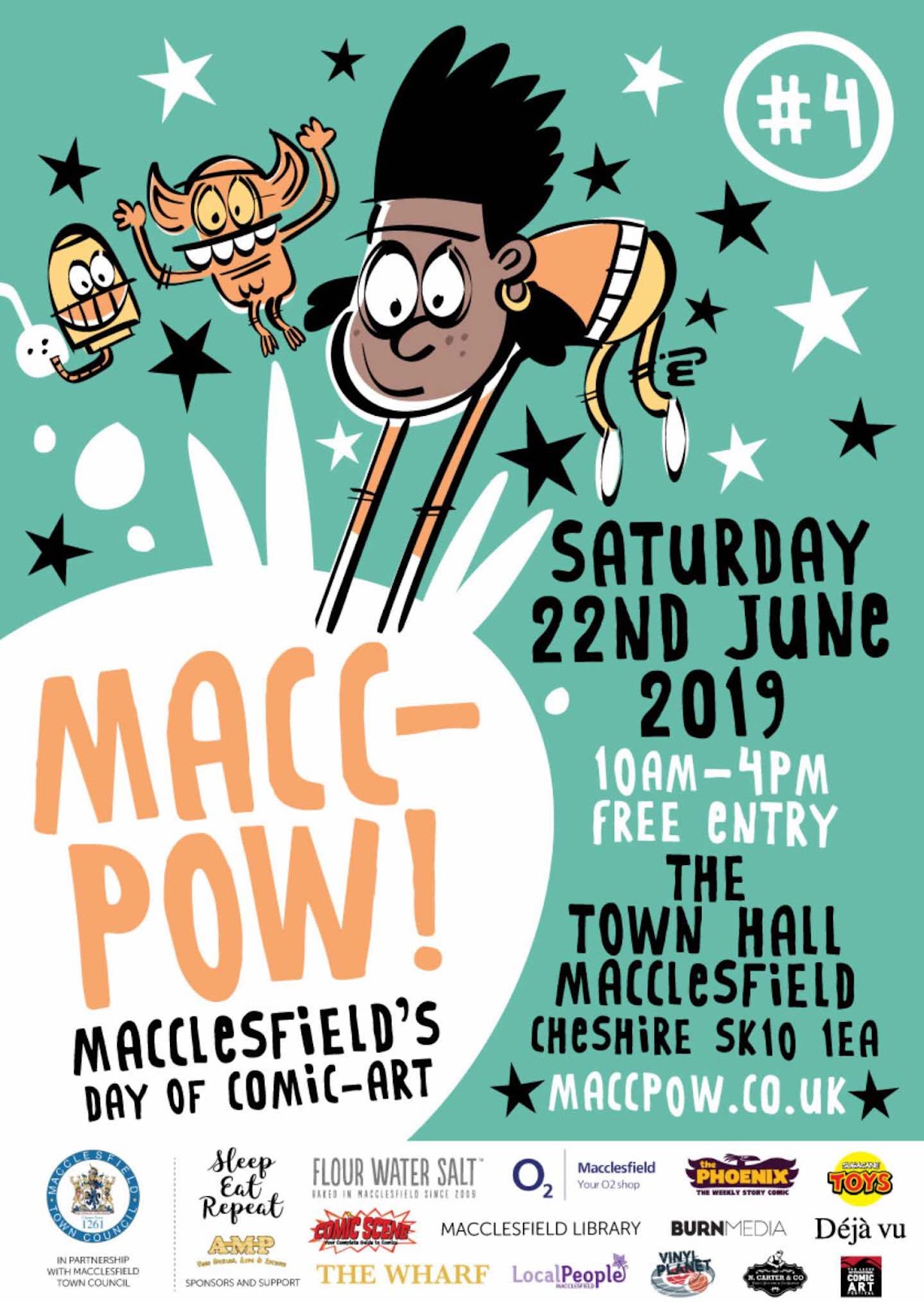 I haven’t been to this event before but met up with organiser (and poster artist) Marc Jackson at the NCS Festival last month. Looks like a great lineup that includes Lew Stringer, Hannah Berry, Rachael Smith, Hunt Emerson, Dave Leach, Roger Langridge, Nick Brokenshire, Emmeline Pidgen, Jessica Kemp, Tor Freeman, Jacob Phillips, Nigel Parkinson and David M Barnett.
I’m also looking forward to finally meeting up with Podcast pals Ian and Nicole from The Lakes Podcast and more (BUY LEAF! It’s great!)
Follow this link to find out more http://maccpow.co.uk/ It’s also a free event!
One week later is something more of a hike/journey to the land of my mother, my dog and Groundskeeper Willie.

Another first for me but I’ve heard some great things about this event. I’ll be passing through as a punter but will also have a boot full of recent Nobrow books ‘In Waves, ‘Kingdon’ and ‘Skip’ so let me know beforehand and I’ll hand deliver.
Back to GCC - they have a cracking guest list. Chip Zdarsky, Frank Quitely, Brian Stelfreeze and Ian Kennedy!
There’s a lot of great buzz about this event and I’m looking forward to seeing some of my Small Press brethren in attendance.
You can have a look at the guest list here http://glasgowcomiccon.com/
Go buy your tickets here http://glasgowcomiccon.com/
I’ll be staying overnight and looking forward to a beer! (You have been warned!!)
Next up. 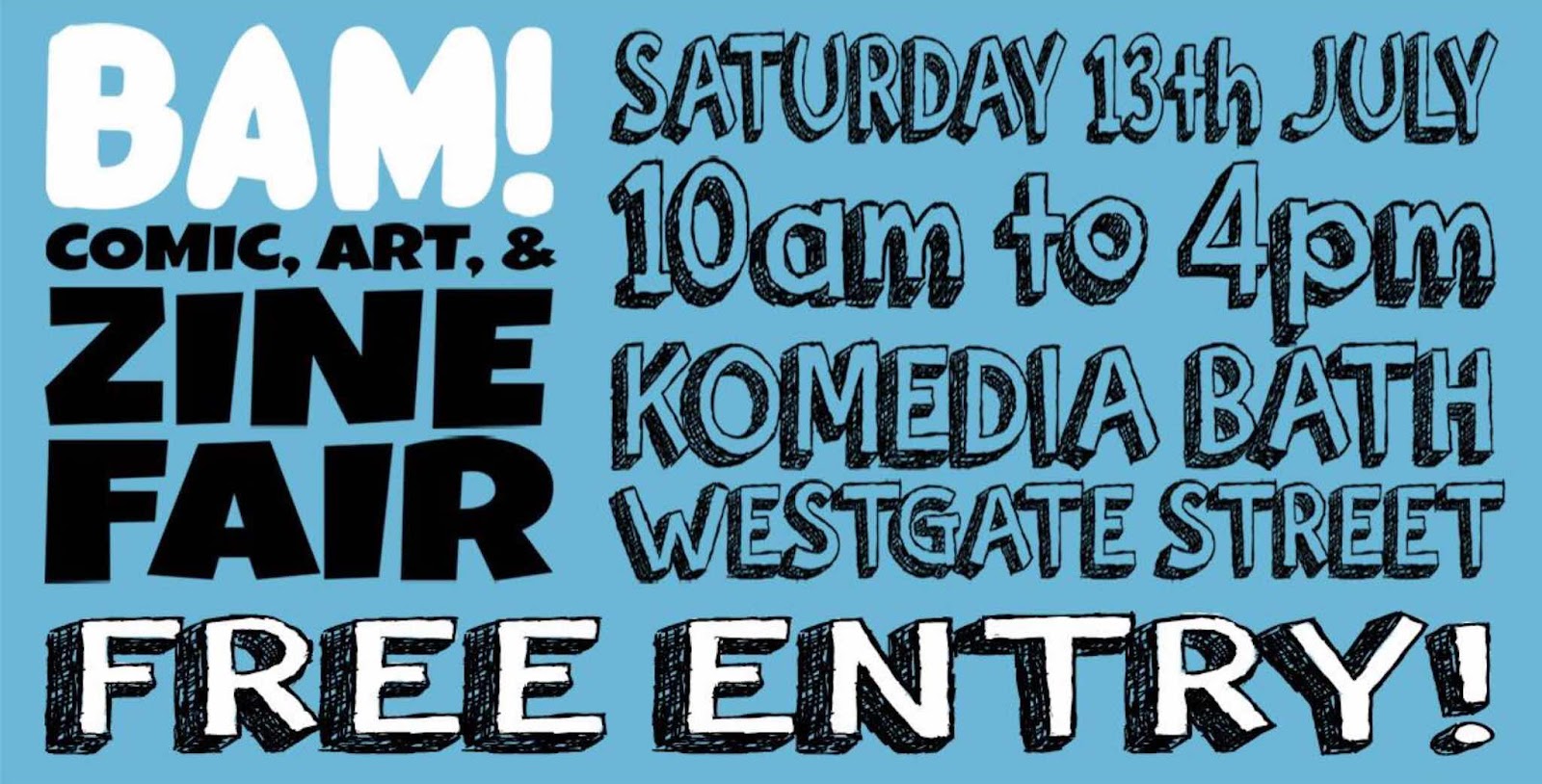 This is going to be flippin’ great!
Run by some of the comics people of the area that includes my Podcast Brother Vincent Hunt and the ball of energy that is Rachael Lee-Carter I’m pleased as punch to say that I’ll be tabling for Nobrow at this event. I’ll be blogging about some great deals and freebies we’ll have for Nobrow and Flying Eye fans in the next couple of weeks.
Other guests include Paul B Rainey, Russell Mark Olson, Andy ‘Zoot’ Hanks, John Tucker, Paul Ashley Brown, Olga Alexandra, Simon L.Read, Sarah ‘Milmo’ Millman, Steve Sims, Nick Prolix and many, many more. This is a real treat for comics and art fans and an event which is in it’s second year that has a great sense of community. It’s highly recommended.
Have a read about this event here https://bamcomicfair.blogspot.com/
Get those creative juices stirring!
See you there and thanks for reading. 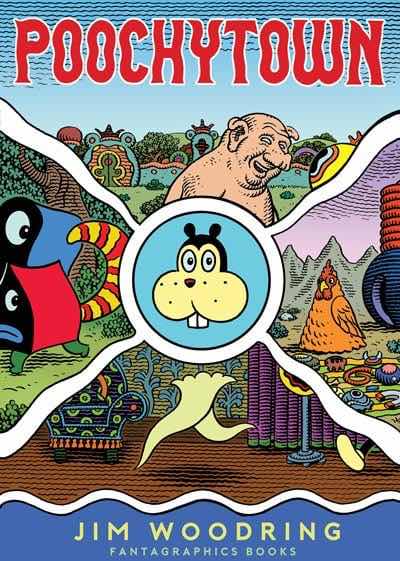 The Story - ‘When Pupshaw and Pushpaw depart for the orgiastic delights of Poochytown, the forlorn Frank is thrown by a twist of fate into an unlikely friendship, propelling him down a long road of escapades and trials that ends in one of the most shocking acts ever depicted in the Frank canon.’ 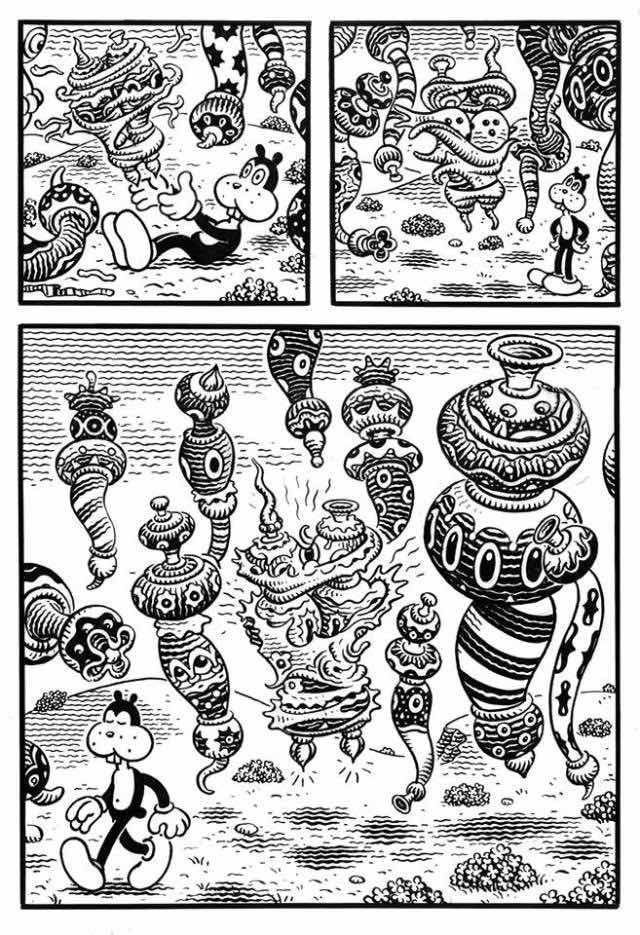 The Review - You know sometimes you put a book off. Until you have reached the correct state of mind? I’ve been meaning to buy this for months when that perfect series of events pushed me off my arse and got me to purchase and read it.

Event 1 - I recently spent some time with my pal Bob Fingerman. A clever guy and a talented artist. I commented over dinner that I hadn’t yet read Woodring’s release through Fantagraphics of Poochytown. He gave me one of those sideways looks and said ‘You really should do’ and then recounted a story how he’d hung out with Mr W whilst they anointed a museum toilet with their art (with full appreciation it might be added from the owner of said lavatory!)

Event 2 - The book ever seems to be in my eye line in every comic shop I attend. It’s there taunting me. It knows that I need it. It sees me when I walk in and eyes me suspiciously yet also teasing me by lifting it’s skirt a tiny bit.

Event 3 - A Facebook associate shared an original page he had bought and I sat admiring it on my phone whilst drinking my fourth coffee of the day.

Event 4 - I bought a new book release from equally surrealist art styled creator called Andy Baron at the recent ELCAF and promptly arranged for him to come of the podcast. Was I being subconsciously pushed in the direction of P’Town throughout this time?

The misshapen eyeball prodding planets were indeed aligned and with their hands on my shoulders guided me into spending the £17.99 in a London comic shop just yesterday. 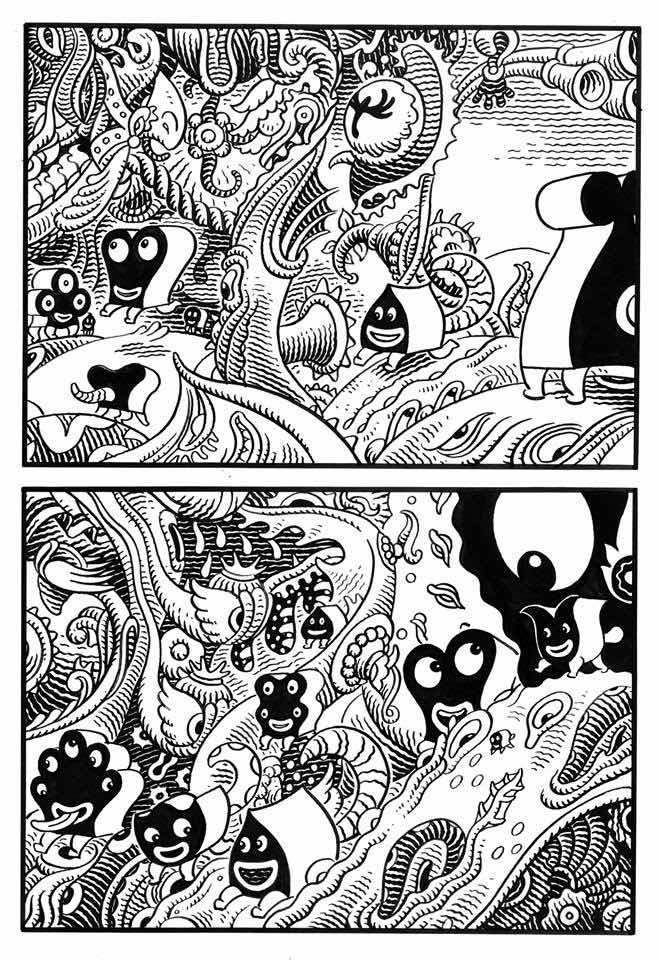 I read this book, as I am prone to, on the train home and became hypnotised by it’s contents. The work of the unconscious mind had me gripped.

I have now read this book three times in the last twenty-four hours and honestly cant image reading anything else all day.

This is also a book that confounds a proper description but I will try nonetheless because as you all realise by now I am fond of my own voice.

Imagine a sentient flesh altering virus, it first invades our dreams and sends them over a nightmarish edge. We then leak our sleeping mind into the world of Disney cartoons and old fairy tales. This twisted freakish reality then appears fully formed onto the page of a hardback book in alternatively precise and chaotic inks. All the while we watch obsessed with the next troubling turn of (almost) narrative. Some worrying highlights.

A pig/human hybrid eats a nest of baby birds.

Beings, creatures, objects, organs take bites out of each other only to have them grow back.

A tuba case contains a snake like animal curled up that when you force a reed into it and blow really, really hard a black and white psychedelic maelstrom forms and grows and pulses above the heads of the animate.

A steering wheel appears out of the ground at the feet of creatures who use it to drive through not only shifting landscapes but ever changing realities without ever taking a step away from where they stand.

Over and over and over Woodring chases your reading mind and points out that you don’t really have a clue what you think you know. He brawls with your conception/preconception of what you see and points at the floor whilst he kicks you in your ass. The reading experience changes and you give in as the glorious pages work their way past and into your eyeballs. 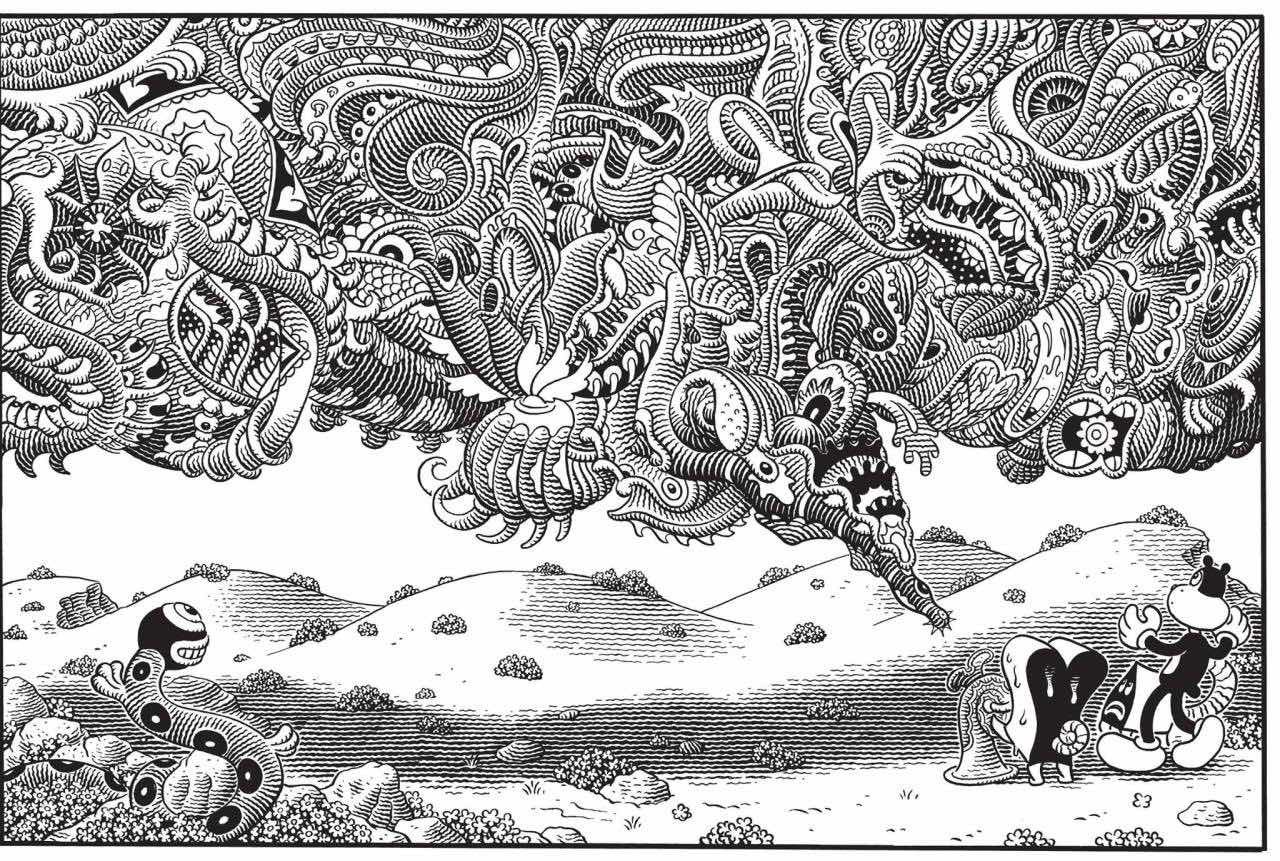 The story does again contain Frank. A recurring character who Woodring is often careful only to describe as ‘a generic anthropomorph’.  He is alsodescribes him as ‘naive but not innocent ‘ and is undoubtably connected symbolically to his own highly peculiar world.

The art is solid and strongly asserted black and white lines with an OCD level of intricate interlocking and lines of parallel and interweaving chaos/precision that you wont see the like of elsewhere. Woodring learned his craft early on whilst working in a studio with Jack Kirby and Gil Kane and you can see their influences in the mix but also the work of the surrealists. Dali can be heard shouting crackpot theories just out of sight perhaps.

The comic is wordless but transmits a symbolic language and twisted logic that shows some great machinery at work. It flows so well that you get caught up in his midst and swept along as you read instinctively and naturally that you never notice the lack of words. For a speech free book it is also conversely a dense read. It will take you a while. Make some time for it and swallow the whole dose.

Organically the story pulses with some shockingly sudden yet great double page spreads with often intricate detail everywhere. In my view every page could be a liner note from a sixties psych band album but with more crazy/cohesion. Yes, there are those nods to animation as I mention earlier. Woodring himself quoted that working in cartoons was the worst job he ever had (and he spent years as an alcoholic bin man!) But you can see how he has made in this book a transgressive and anarchic version of Mickey Mouse, Porky Pig, the candlesticks from Beauty and the Beast and much more.

This book deals with all the themes that you might expect from our dreaming and hallucinatory states of being. Life, Death, Danger, Sex, Friendship, Anxiety and more. Some of the meanings seem sharply obvious and some we will never work out from the guesses we make at Woodring’s intentions. I personally don’t need to be told and the experience of this book is enough (for the moment) for me.

I can’t recommend this to everyone. Not all of you will get it or appreciate it. Those that will/should can eat it up!

Let’s face it though, works of realism only get the juices flowing to a point. We need the hallucinatory and instinctual crazy in our lives occasionally.