This was my fifth and best New York Comicon so far.  The venue at the Javitts Centre on 11th Avenue is now taken over completely by the convention and rightly so.

This is the first of my reports about the creatives I met there and some of the sketches and comics I bought.

First up is the great Atlas and Hulk artist Gabriel Hardman who can be found on Deviant Art at http://heathencomics.deviantart.com/

I got a great Hulk sketch from Gabriel and he gave very generously of his time to talk about the new Hulk series he is working on and the (sadly) now cancelled Atlas series. 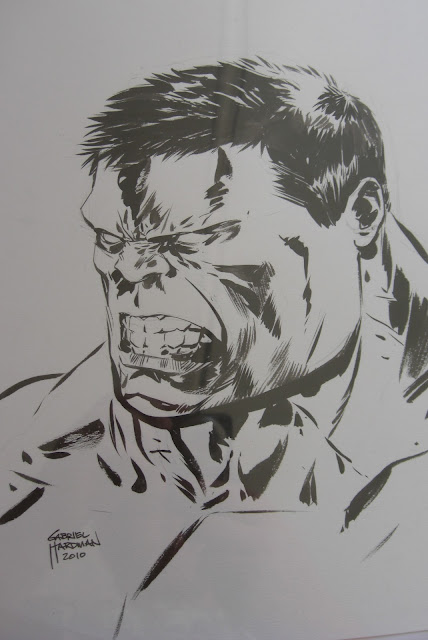 This sketch is interestingly a try out sketch he did for Marvel when they were thinking about offering him the Hulk gig.  Personally I think the Hulk comics needed a bit of depth to them after the Jeff Loeb run which to me seemed more about splash pages and surprise endings.  Gabriel joined up once more with Jeff Parker from Hulk issue 25 onwards (don't be put off by the Ed McGuinness Jr cover the interiors are all by Hardman).

The issue has a reall Sci-Fi feel to it where Steve Rogers recruits the Red Hulk from captivity to fight a plague of super mutants.  The beats of the story have Rogers visit Red Hulk in his cell and initially refuse freeing him because he has the wrong attitude (a great touch).  He is eventually freed and sent to defeat a mutant techno virus force of ever growing monsters.

The art has a slightly old school pulpy style to it and I can read a lot of John Buscema and 1970s Marvel influences brought up to date.  The look of the book fits right in with the current phoenix from the ashes feel of the Marvel Universe at the moment as they scrabble out from under the heel of Hammer and the Dark Reign storylines.  It is well worth a look if you have fallen off the Hulk bandwagon (as I was about to do).