Myself and the Boy Wonder (for those not paying attention he is my comcs reading 14 year old son) went and saw the new Thor movie in 3D at the local cinema.  We wisely went to the 9.45am showing to avoid any crowds (have there been any?).

Not sure what you may have heard but there may be spoilers. 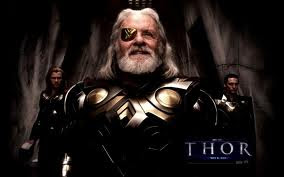 The movie Thor was well made. I specifically enjoyed the storyline. And Loki's deception of Thor.

My favourite character was Heindall and I thought his strange eyes were cool. He had a good view over the entire story.

My favourite scene was the bit when they got drunk as it showed the human side of Thor.  The battle scenes were good even though sometimes you couldn't see what was happening. It was a little fast and the special effects got in the way.

The acting was good especially on the part of Loki.  I liked the interwoven story between Earth and Asgard.  Not sure if I liked the Destroyer and I wanted the fight scene to last longer.  It seemed to be over very quickly once Thor got his powers back.

I would recommend this movie if you know about the storyline at Marvel and watch out for the scene at the end after the credits. This was very cool.

I thought it was pretty good.  But this isn't my review is it.