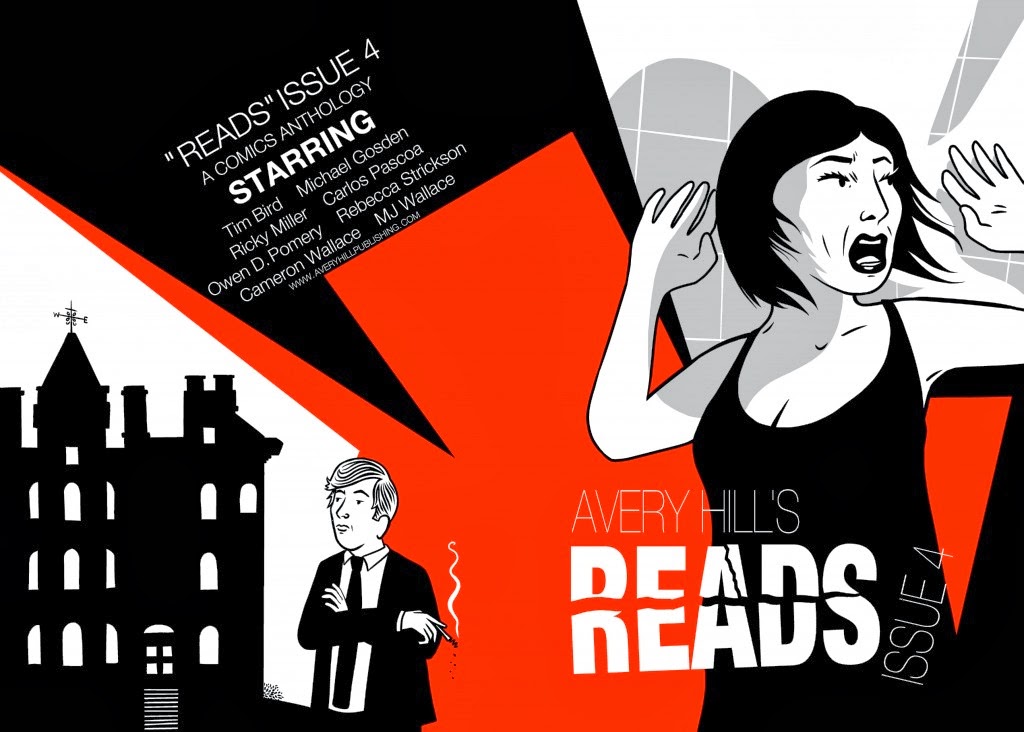 In the world of small press comics companies Avery Hill are a prime example of a group of people who take this stuff seriously.

They have a regular and high quality output that I always enjoy reading. Based in South London/Kent they occupy an otherwise artless commuter belt of rough and ready south of the river.

I look forward to each and every release with enthusiasm. 'Reads' is their anthology/showcase title. This issue (number 4 in the series) covers subjects such as alienation, flight, love, ghosts, mix tapes and costumes.

This issues cover is a minimalistic wrap around Tim Bird creation with great use of black and white and red. The interiors are black and white but I hear that they will soon be experimenting with colour strips later in 2014.

Rather than list all stories I thought I would focus in on a couple. (Not that the book isn't all a treat.)

One of the standouts is 'Silent Treatment' by Owen D. Pomery. A regular at Avery Hill (in fact he has this and two other one page strips in this issue) his work always exhibits depth and often quiet melancholy or loneliness. The story follows a man who never talks (or feels that he doesn't?) and has a bubble round himself as he transverses the modern world. I won't spoil a poignant end but it worked perfectly as a short story. It allows moments allowing the reader to breathe and think. His art style in this story makes use of some really interesting line work that builds the texture of the panel. (Maybe a little Eddie Campbell in style?)

I always get a sense with Owen's work that he revels in the outsider. The man observing, looking at us from elsewhere. This gives his work a laid back sense of contemplative ennui.  We see an emphasis on personal identity that lacks from many other small press attempts. But we also see an intricate weirdness to his situations. His stories exude eccentricities but keep real life emotion, he speaks to a cult appeal but remains eminently readable. Just lovely stuff.

It's hard to pick stories out from a great mix of real quality but I wouldn't feel comfortable without mentioning Tim Bird's 'Mixtapes'. Tim blows me away every time and I think this may be the best I have seen him. His line work is showing real growth and has an accomplished and clean look to it. He reminds me a little bit of a English Jeffrey Brown? He shows that level of introspective sensitivity. Some lines throw you back to your youth and punch you solidly in the guts.

'And I kept making tapes for her that she would never hear.'

Just the above line was enough to explain everything you needed to know in the story. Speaking less and saying more is a great strength of Tim's.

It's his attention to detail in this strip that really shines. His recreation of album covers and mixtape handwritten labels, just gorgeous. For those of us old enough to remember sifting through vinyl and taping onto C90s this story was a real treat. It'll throw you back to those awkward moments in the eighties and nineties.

I genuinely can't speak highly enough of this anthology (I picked mine up from the always reliable Orbital Comics in London's West End).

If you fancy reading this or more of their output they can be found at www.averyhillpublishing.bigcartel.com

If you fancy dropping me a line with angry criticism or the offer of beer I can be contacted at www.beardrock.com or on Twitter @ezohyez.