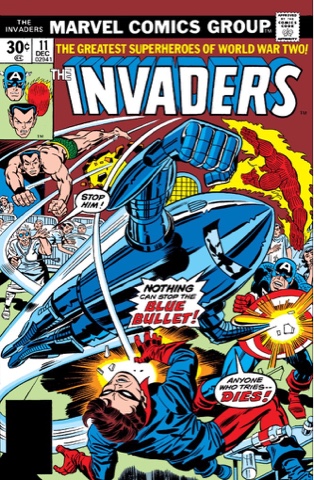 A Comic Cover.
One of the most popular Pods we have done recently was the episode about comics covers. So I thought that I would choose a cover and talk about it. I chose the cover to The Invaders Vol 1 issue 11.
I find the idea of a comic cover a fascinating subject in our little hobby. It acts as an advert, a sales pitch and an object of art all in one go. You get one go at selling the insides of a comic through what is displayed in (usually) one image on the front of the comic. It's that combination of art and sell, sell, sell that is an interesting crossroads. In many ways it stops us comics fans getting too pompous with our art snobbery. Especially back when this was produced
I decided to take the plunge and try to explain to him why I liked a certain cover. What measurements should I use in my explanation? Art is completely subjective so how do I measure my love for something? The cover I have chosen is from Invaders issue 11. A comic that was printed and released just prior to December 1976 and features an image by Jack Kirby.
Ah... Jack Kirby. One tick.
Kirby is up there for me. I suppose it's his dynamism that really catches me. That image of the villain on the cover, swooping in a completely illogical way through a wartime hospital ward. All the story is squeezed into one page.
It features Captain America, Bucky and the Sub-Mariner. All classic Marvel characters. That gets it a second tick.
Marvel remains my favourite company. And the so-called Bronze Age is my favourite period. A time of weirdness and experimentation. This new at the time series had Nazi Vampires and reanimated Norse gods. I saw it as the Avengers with some added crazy based in WW2. The fact that the series also often featured a British hero called Union Jack was also a big draw to this London born and bred fan.
So, what am I really saying here. Nostalgia I suppose. It's an easy go to and never that simple. But one of the reasons that this cover came to mind was the good memories I had of it as a kid. Back in the 1970s we grew up reading comics. We didn't decide that it sounded like a cool hobby and get into reading them in our twenties (that is seemingly a modern crime!) Myself and my pals would all be reading Captain Britain or The Mighty World of Marvel and when we could get our hands on them we'd also read some American monthlies. One of my mum's pals lived nearby and her son was my age. I thought he was a bit of a wanker but at least we could both enjoy comics together. Then one day his mother decided she didn't want comics in the house and handed his collection on to me.
This included Invaders issue 11. I still have it. It is now scruffy and dog-eared and I wouldn't have it any other way.
Fucking glorious!
Posted by Tony Ez Esmond at 09:47