In Preview - ‘Accident Man’ - The Movie. 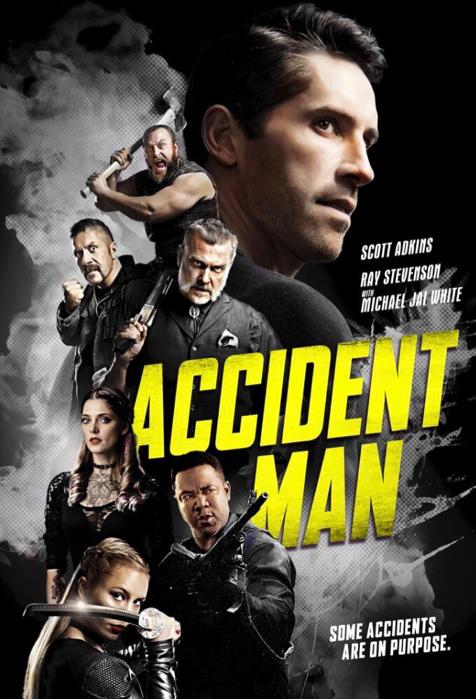 The Story - Mike Fallon is an assassin who was trained from a teenager by Big Ray. He isn’t one of those guilt ridden or moral kind of guys, nah, fuck them. He’s a professional. He takes hits and makes them look like accidents. But then his ex girlfriend and their unborn child is killed in a hit made to look like a crackhead fake burglary he goes on a hunt to find out who on his crew carried it out and who paid for it. There’ll be a few dead before he gets to the bottom of the mystery.

No Beating up Milton. 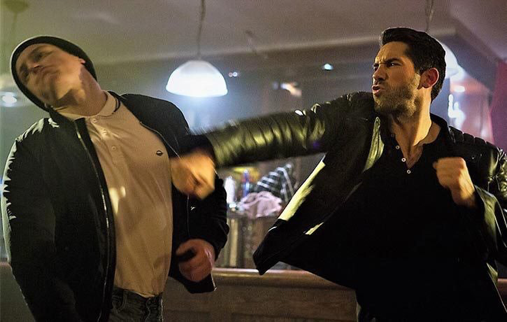 The Review - As a fan of the comics of Pat Mills and Tony Skinner and the martial arts genre that is currently being lead by Scott Adkins in the UK this was a perfect storm for me. This is a movie of black humour and great fight scenes. I’m actually not sure that we have seen a movie quite like this before. As I am watching it I am relieved (no, not like that) that I am finally watching a British movie where the actors (well most of them - apologies Perry) look like they can kick a few heads across a room. Being a hitman looks like it is violent but fun.

‘I like the hours and it pays the bills.’

This is a movie that takes off straightaway in the satire stakes as it does in the fucking magnificent fight scenes. It is brutal and unflinching in both. As the one-liners fly so do some bone crunching kicks, blocks and punches. The fight scenes are full of genuine edge of your seats moments and you’d be hard pressed to guess who will win or come out alive. When Fallon kicks a motorbike helmet wearing ‘Southern Style’ martial arts hit man in the head you see and hear how hard he delivers each blow and you wonder how they bloody did that. This keeps going, and I genuinely believe that every fight scene in Accident Man can proudly stand against anything going on in Asian and American cinema.

‘Is that some kind of accent or is your mouth full of spunk.’

We’re not really meant to like Fallon or any of his ‘colleagues’. They are cheeky, blunt, offensive and murderous. They band together in a vague business arrangement yet would still slit each other’s throats for the right price. As Fallon walks into The Oasis, a clubhouse for scumbags, he introduces you through a monologue to all the scruffily disparate assassins who drink themselves stupid, insult each other and wait for the next contract. This is like Lock Stock on acid! It’s that good. 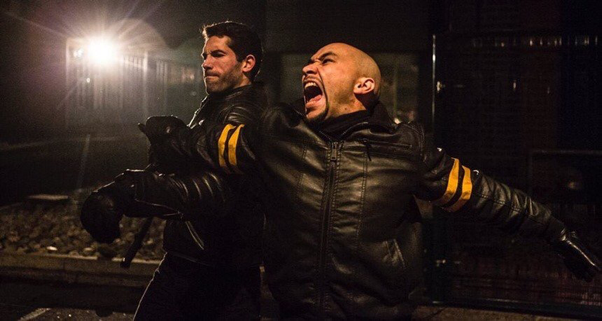 Adkins is clearly in love with the source material and has spoken about how he read the comic over and over again until it fell apart. Whilst some things aren’t the same as the comic this is easily forgiven as the movie sweeps you up in it’s punk attitudes that are tone perfect with Mills and Skinner’s work. In the movie Fallon is less a preening yuppie and more a lad’s lad but this he pulls off well. I think this is the best that I have seen from Adkins. He carries scenes with a smirk and a knowing smile.

The movie aIso adopts the narration lead approach of the comic and this is one of the reasons that puts it stylistically out on it’s own. I’m not exaggerating that it had me grinning all the way through my watch. We see and hear Fallon talking to the viewer about his twisted life philosophy and each hit he carries out.

It is great to see so much of our beloved comic up there on the screen. The movie follows pretty much the whole of the first story arc that appeared in Toxic  in the nineties with only changing the odd moment. My smile broadened where Fallon describes how he unwinds after a murder and gets rid of his ‘P.M.T.’ Aka ‘Post Murder Tension’. He heads to a shit hole boozer, pays off the door staff and takes on a room full of thugs. A great translation of an iconic moment in the opening of the comic that perfectly sets you up for the rest of this movie.

The filmmakers cram the movie with action stars. They are all excellent. After Adkins I would have to put Amy Johnston up there as one of my favourites. Her one on one fight as Jane the Ripper against Fallon is beautifully choreographed. Blow after blow landed with real strength. Fucking glorious.

Ray Stevenson who plays Big Ray aka the retired nutter who is now running the gaff is in both his looks, attitude and speech triumphantly anarchic. He spits lines out like an angry Frankie Boyle and fires a machine gun like he’s casually buying a paper in Tesco Express. Adkins has surrounded himself with some great talent yet I still come away feeling that he embodied the spirit of that immoral and unprincipled bastard Fallon and carries the action and the humour throughout.

(It’s also great to see ‘Fat Tony’ from Love, Honour and Obey back on the screen!)

Music is also high on the mentions for Accident man. Without spoiling the story for those yet to see the movie there is a flashback ‘Origin Story’. It kicks in with ‘A Town Like Malice’ by The Jam and the hairs on the back of my neck stand up before it leads into the chorus of ‘That’s Entertainment’. As Fallon motorbikes his way through London we also get some great soundtrack music. This movie welcomes that drive-in/midnight movie vibe and plays up to it over and over again. It genuinely leaves me wondering why we don’t get more movies like this! 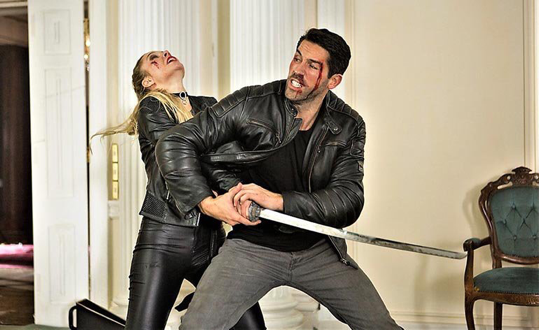 Look. I loved this movie. I went straight back in and watched it again. But there are some moments that could have done with a few quid thrown at them. The signage to the Russian Gym looked a bit thrown together to quote a minor example. But you easily see past some schlocky moments and totally revel in a satirical, ass kicking, genuinely funny ride of a film. A few of my comic loving friends have watched it already and want more straightaway. It pushes outrageously at it’s out of order pitched humour and that had me totally on side. After being sent a preview copy before the UK release on the 16th of April I will totally be buying myself a blu ray when it’s available.

I genuinely believe that this is something a little different and a little special. Great for comics fans, movie fans and martial arts fans. 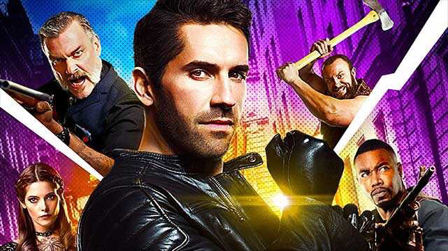 And also make sure that you grab a copy of the original graphic novel here on ComiXology https://www.comixology.co.uk/The-Complete-Accident-Man/digital-comic/69256?app=2&read=1

Look out for more of Scott Adkins movies. He’s the busiest man in martial arts movies and all are worth a look www.scottadkins.com Or follow him on Twitter @TheScottAdkins

Find out more about Pat Mills and his comics and prose work at www.millsverse.com or follow him on twitter @PatMillsComics