Anyone fancy a round? 'Fantasy Sports 3' goes all golfy! 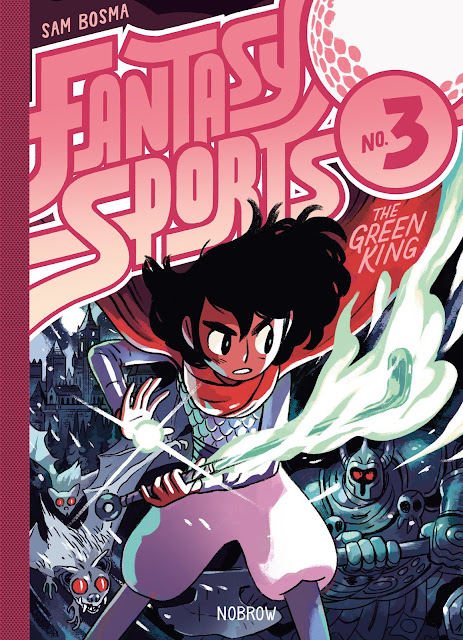 'Wiz and Mug become separated after washing up on the shores of a gothic castle town, where a monstrous beast has taken over King’s lands and left the people to starve. Wiz breaks into the beast’s castle and finds herself thrown into a game of supernatural mini golf. Can she win the game and escape with her life? Meanwhile, Mug uncovers the sinister truth behind the Order of Mages…' 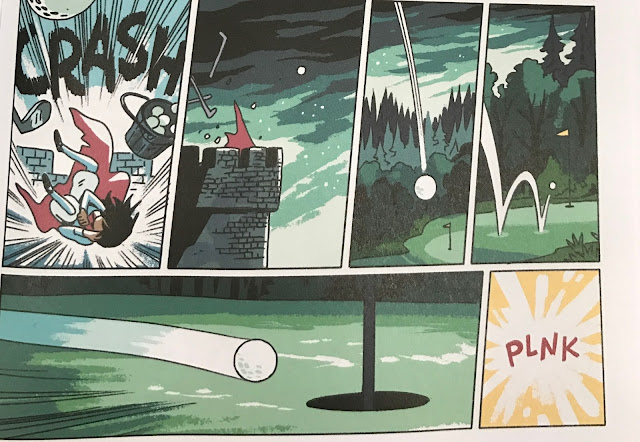 The Review - Have you ever played golf? I have to admit that I never have. But, if you thought that it was a bit of a boring sport that over the hill comedians and television celebrities played after reading Fantasy Sports 3 you may have to reassess your views on the subject. I for one would watch a lot more golf on the TV if it involved demon kings, graveyards, water monsters and animated mystical knights who guard the putting greens.

I was over the moon that Sam Bosma's series is back on the shelves. I have loved the first two that pitted our heroes against monsters who played basketball and beach volleyball so I was wondering what he could do with a game as slow as golf? What you get is another edge of your seat sports match but in this episode Sam elaborates on the mysterious back story of Mug and Wiz. Whilst Wiz tries her best with a putting wedge and a nine iron Mug gets told a few home truths about the Arch Mage. 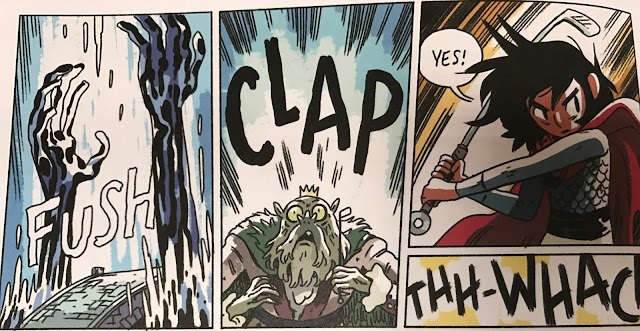 The art is once again a masterpiece of pacing. You can see the kinetic full throttle Manga influences in Sam's work. It's a huge compliment to say about Sam's style that on some occasions it's difficult to read and turn the pages fast enough. The energy of this series is off the scale and after one read I'll guarantee that you'll head back to see what Easter Eggs you missed.

'I yoinked ye from the ocean and so ye must grant me one wish....'

It's also a very funny book. Mug and Wiz are now the perfect double act. They have grown into a hilarious pair of investigators rather than the mismatched wizards thrown together in the opening chapter. Sam introduces gallons of spiky character quirks into the speech of everyone on display. You see that they have a simple and often funny appearance but dive a little deeper and there is an underlying menace and darkness in many of them. The acceleration of the conspiracy theory behind these fun adventures has me really hoping that we don't have to wait long for the next installment. Don't skip to the last page but we might get some answers very soon....

Genuinely folks, this is a book that you need to own. This series is read as soon as it arrives through the letterbox and will put a smile on your face every time. Volume 4 soon please! 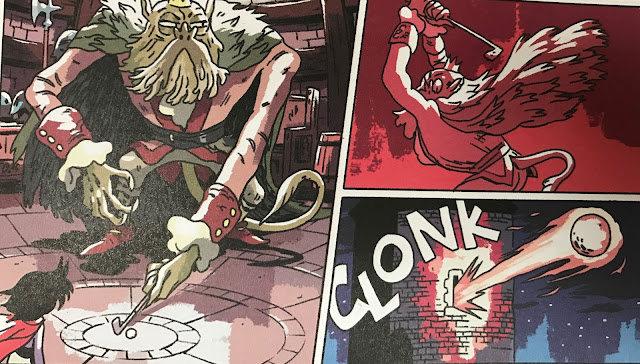 Sam Bosma was born in Chagrin Falls, Ohio and grew up in Pennsylvania. Having graduated from the Maryland Institute College of Art in 2009, he stayed on to teach in the Illustration Department from 2011-2013 before moving to Brooklyn, NY, where he lives now. His work has been exhibited in New York, Los Angeles and internationally and he has been recognised by Spectrum, American Illustration and the Society of Illustrators. He won a Silver Medal from the Society of Illustrators in the Institutional category, as well as a Gold Award from Spectrum in 2013. When he isn’t making comics and graphic novels of his own, Sam does background drawings for Steven Universe on Cartoon Network and has had illustrations appear in The New York Times, The New Yorker, The Wall Street Journal, Entertainment Weekly and other magazines. Find out more about him at his Tumblr page here or follow him on Twitter here.