Friday is definitely the day to go I decided to remind myself next year, quieter and calmer than the weekend. In the burning hot early afternoon sun I bumped into co-founder Sam Arthur outside The Round Chapel in Hackney, he waxed philosophically about the hard work that had gone in to this year's (and every year's event). I then headed in. ELCAF had begun for another year. 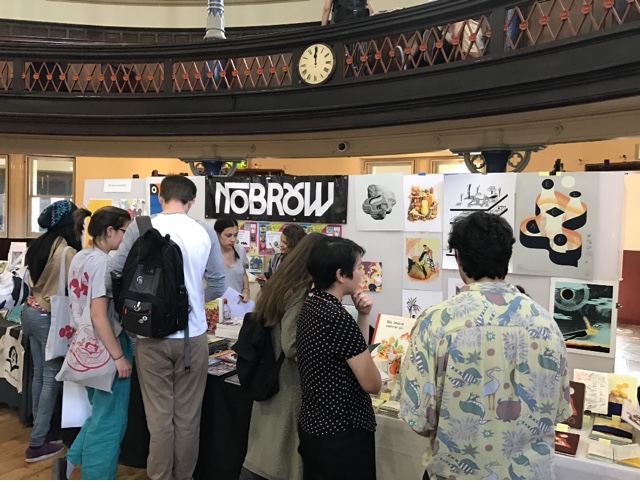 This venue is now in it's second year as a home for the festival. A main hall of tables and a DJ has a quieter and more peaceful balcony above the hall. You can sit there and read purchases as I often did throughout the day. Adjacent to the main hall was a workshop and art room with a talks room nearby. Outside there are two marquees for further talks and tables as the weekend got busier. I took time and sat with the events organiser Angela Francis and it's artistic director Ligaya Salazar. Both were taking a well earned five minutes break as the event got into it's stride. 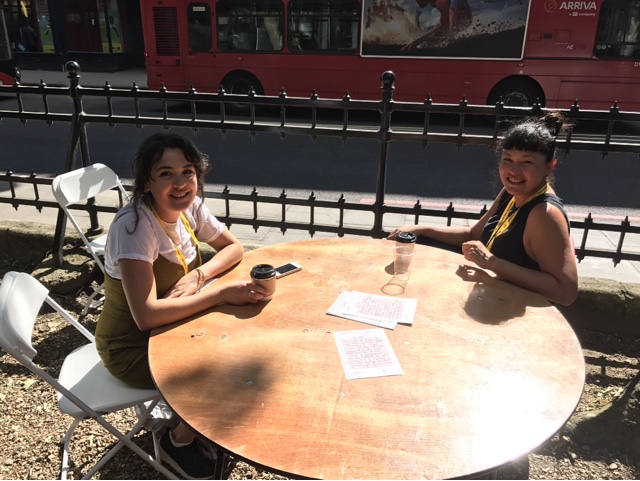 You can really feel the optimism in the air. ELCAF and it's parent company NoBrow are really holding open that door between experimental art and comics. People are pushing was can be done with the medium more and more these days and there is no greater champion of this approach than this crew.
The content of ELCAF is something that is examined from every angle. A curated exhibitors list again this year with an eye to who has something new being released and access is given to creators on the Friday that may not necessarily reflect the same table structure on the weekend. Ligaya told me that this was to allow the opportunity to exhibit to as many people as possible in a very competitive field. I have to give a shout out to the volunteers as well. Helpful to a person. At least a couple of times over the weekend I was asked what I had bought and what I was looking for (eat your heart out MCM?) 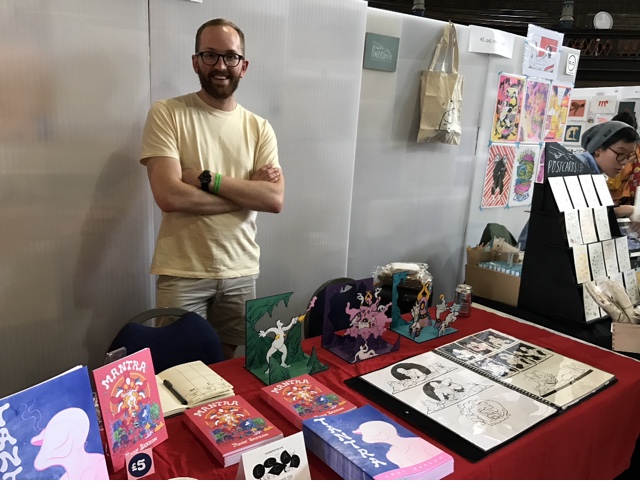 I managed to catch up with some creators as well. Andy Barron is someone who I have been following since he sent me his trippy and (almost) indescribable book 'Mantra'. A colourful, psychedelic assault on the senses that deals with growth, death, sexuality and stripped down human emotion it is highly recommended. He has a new book out inn the same universe called 'Tantra' that I then went and sat and read. More of the same gloriously infectious crazy examination of a world far beyond the norm.
Find out more about Andy at www.andyillustrates.com or follow him on Twitter @omcommics 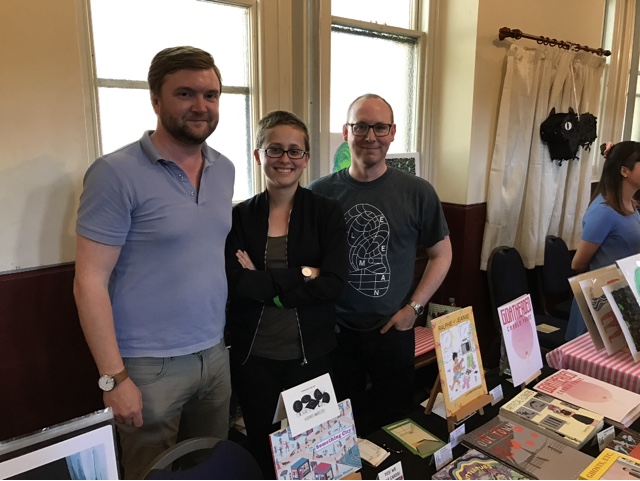 II then caught up with old pals Avery Hill Publishing. Ricky Miller and Dave White had that creative locomotive of Tillie Walden with them. 'The Hill' continue to put out exceptional work that never fails to wow. All involved with running this groundbreaking company do so in conjunction with busy day jobs. Just goes to show what can be donee when you put your mind to it. Highly recommended from their recent releases is Goatherded by Charlo Frade.
Find out more about Avery Hill and buy some of their books at www.averyhillpublishingg.bigcartel.com and follow them on Twitter @AveryHillPubl 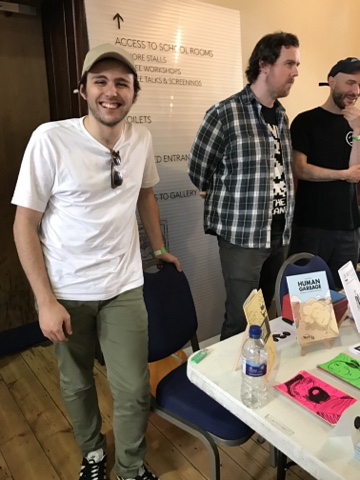 I finally got to catch up with Josh Hicks. I got to interview him for downthetubes last year when he released the hilarious Glorious Wrestling Alliance issue 1. It was great to hear that issue 2 is on the way with a possible third issue next year. He's recently paired up with the folks at Good Comics and was releasing Human Garbage at ELCAF. An anthology of his shorter stories it has the greatest contents page ever in print!
Head over to www.joshhicks.co.uk to grab a copy. Follow him on Twitter @ajoshhicks 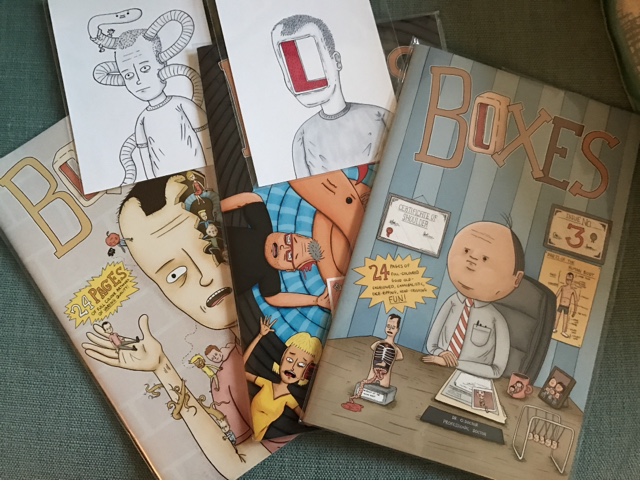 I finally tracked down Todd Oliver who had been as kind as to send his new series Boxes into The Awesome Comics Podcast. We are all fans of this comic. I did an audio interview with Todd that'll be appearing on the Pod soon but can thoroughly recommend Boxes as a crazy and original slice of life comic (if your life was like a Monty Python animation). I bought all three print issues (issue 3 was released specially for ELCAF) and grabbed a couple of £5 sketches as well.
This was actually Todd's first convention and it was great to see he was quite the popular figure. I can see this guy only getting bigger and bigger on the scene.
Get yourself some mind menacing comics as well at www.toddoliver.bigcartel.com and follow him on Twitter @ToddOliver 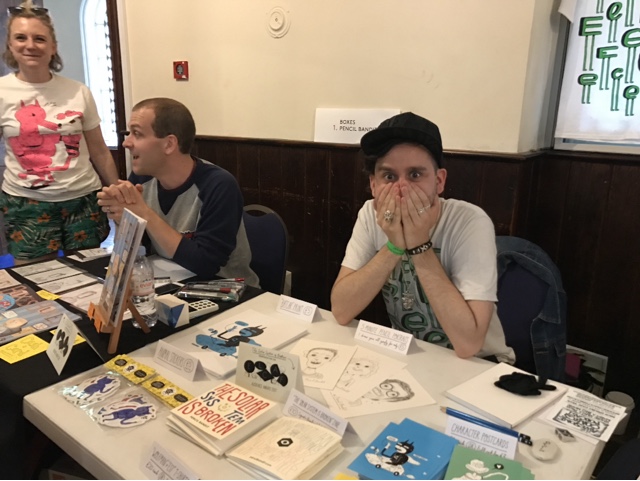 Next to Todd (who is on the left in this photo) was the man only identified mysteriously as Pencil Bandit. I hung about chatting to him and Todd for some time. I even got this excellent 'Batman' from him. 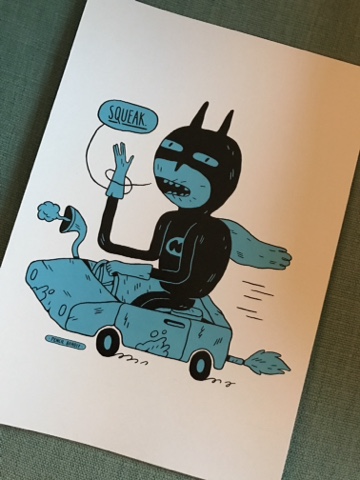 Find more Banditry at www.pencilbandit.com
There's been a a lot of talk recently in the comics community about the validity of Conventions these days. Many seem to be thinly veiled cash grabs based on the use of 'Comic' in the name and then cramming the place with plastic toys and fading celebrities. I would suggest that to those who seek a Comics event with true creative credibility that they look to the East London Comics Art Festival. 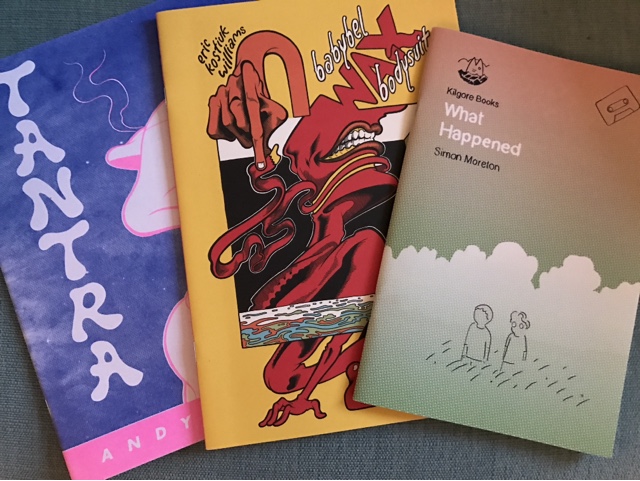 A visual feast of comics art and community this is in my opinion the UK Comics event of the year. I have been going for the last few years and have never failed to walk away with a sense of the real creativity growing up around the brilliant home grown comics indie publisher NoBrow. Always a hubbub of chatter, music and fun and original designs this is an event for all. No fanboy cliques here.
OK, I'll admit it. There is a higher than average number of nose piercings and quite an annoying DJ playing music (please note here that I am old!) but generally the vibe is great.  You know what? In a way it's kind of refreshing that I don't recognise that many people inside. Fresh faces are always needed. Go away and create..... 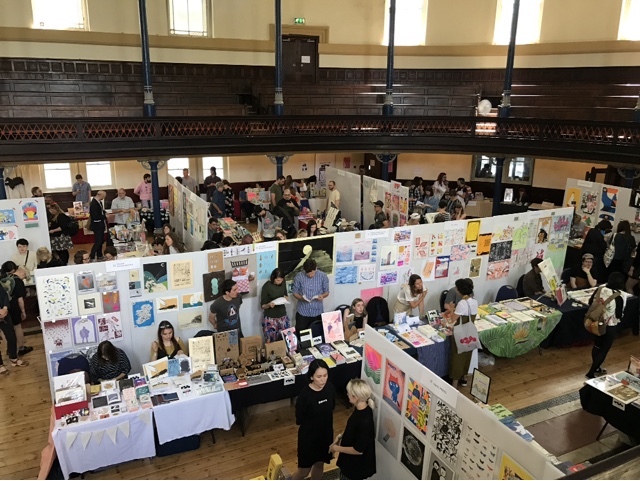 This is easily one of the high points of my comics and art year. Comics should be accessible to everyone. The creation from idea to being in someones hands being read is, to me anyway, what events like this are about.
Find out more about ELCAF at www.elcaf.co.uk or follow them on Twitter @ELCAFest
There's still time to make it down for Sunday?
Many thanks for reading.
Posted by Tony Ez Esmond at 02:25