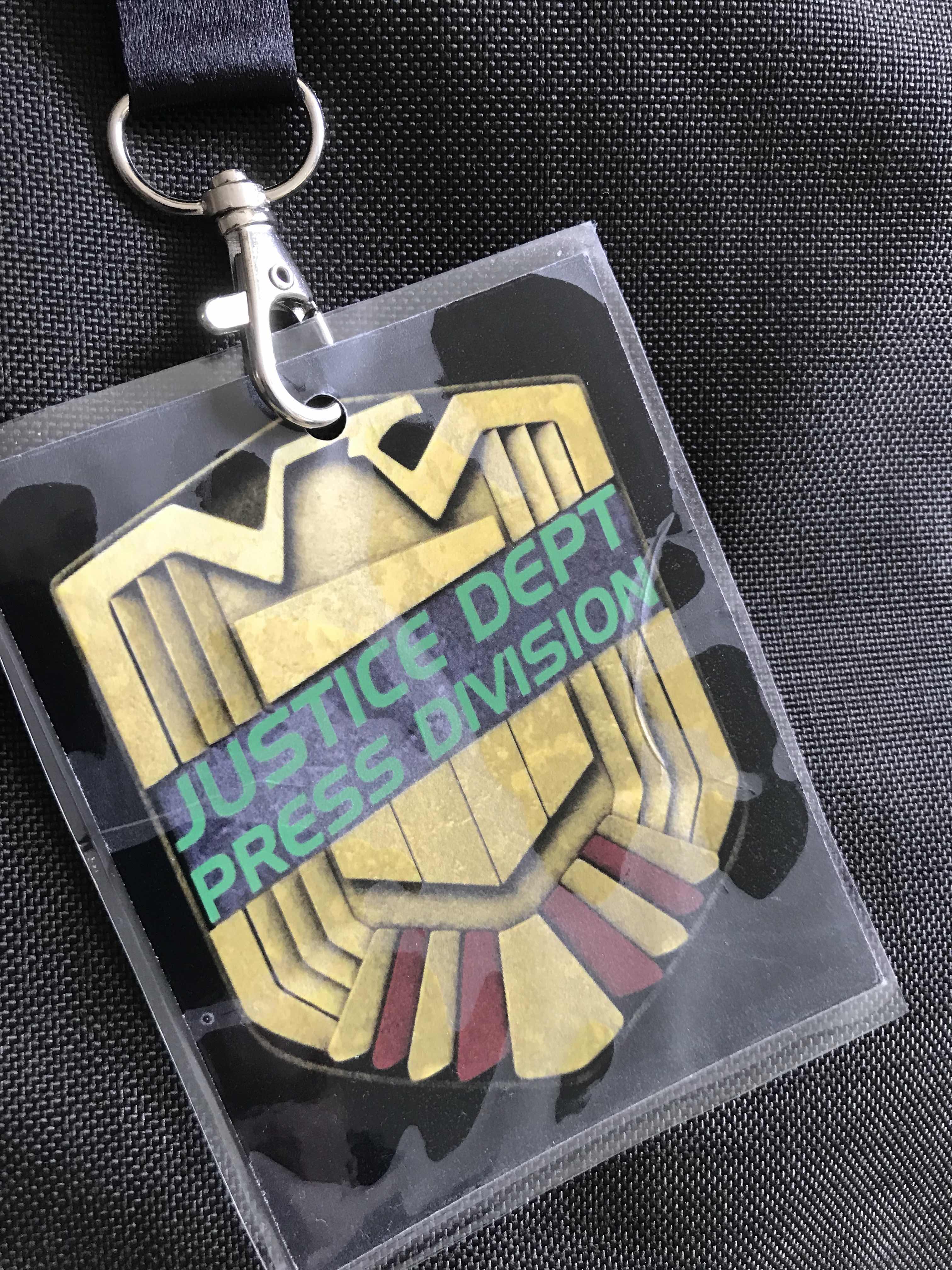 I’ve always been a 2000 AD fan but never quite got into the message board scene that they have of recent become known for. It’s a fucking ace comic and full of some of the best and most imaginative comics you’ll see anywhere. The pod had kindly been invited to come along and cover Lawgiver by the organiser Su Haddrell. I have got to say that she puts on one hell of a show!

The guest list was a who’s who of the good and the great from the prog. Simon Bisley, Mick McMahon, Glenn Fabry, Dylan Teague, Steve Austin, Ryan Brown, Mike Collins, David Roach, Henry Flint, John Higgins and oh so many more. (Keep reading and you’ll discover a few more...) 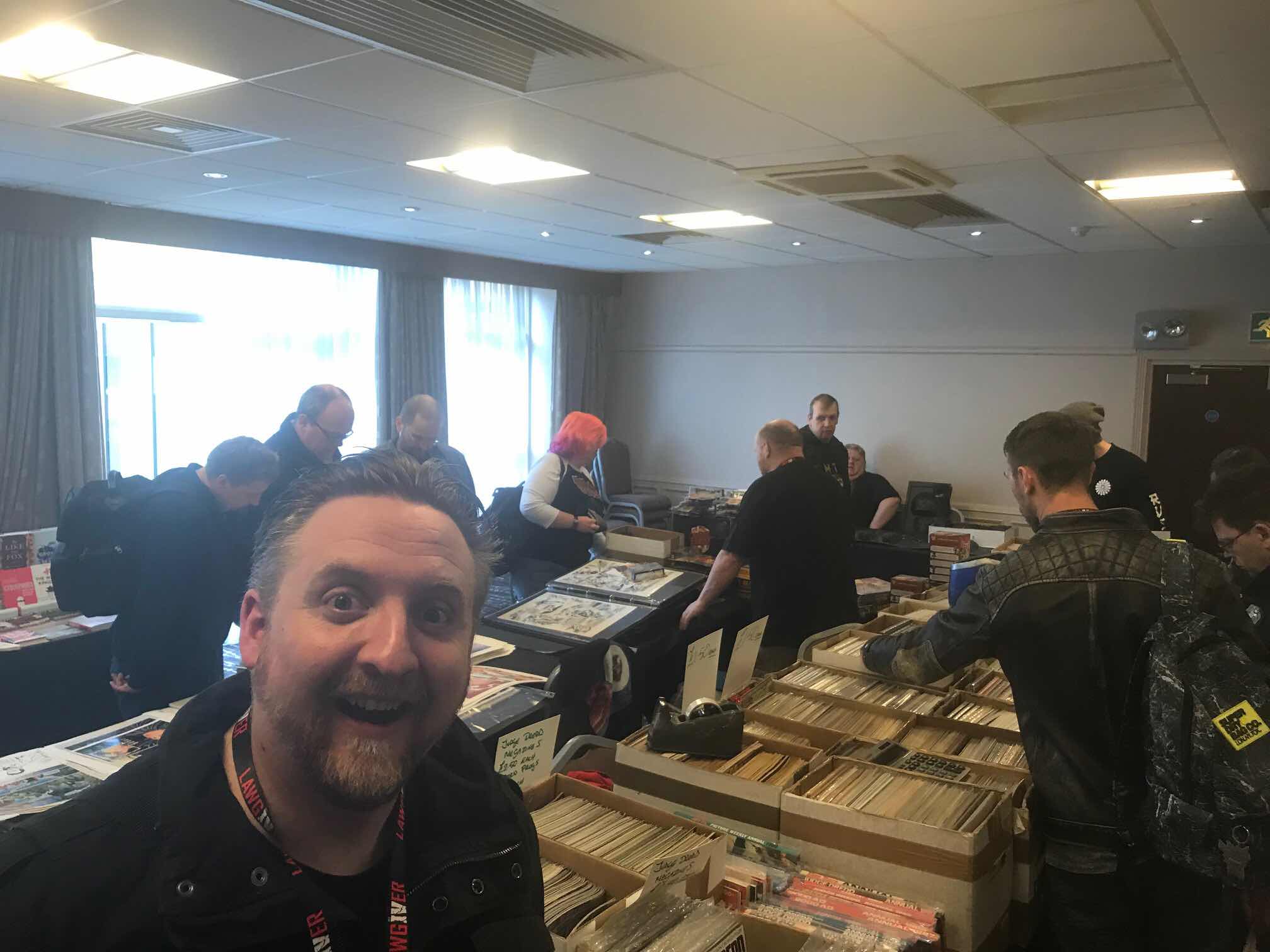 (Mr V Hunt as we had a look at the original art!)

Held at the Double Tree in Bristol which many of you might remember as one of the homes of the old Bristol Comics Expo in the early 2000s. I have stayed at this hotel for three different conventions over the years and it always has a lively bar and pre/post con social scene. Today was no different. Upon arriving we were met by one of our favourite people in comics Iz McAuliffe who was there helping to make the day run smoothly. 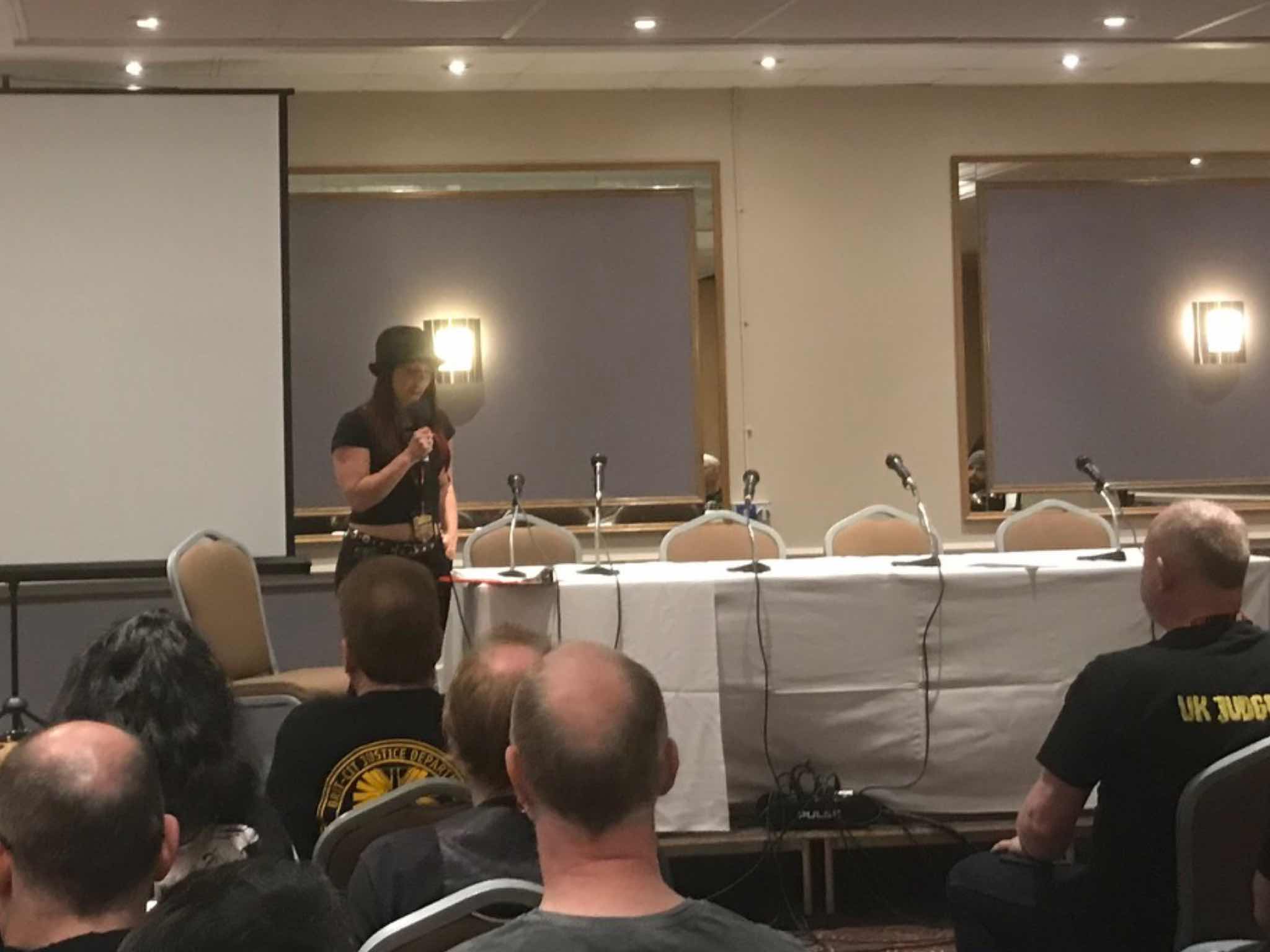 The day opened with all the attendees and guests gathering in one of the talk rooms and being welcomed by Su. This is a trend that you used to see at the old UKCACs (United Kingdom Comics Art Conventions) in the 80s and 90s but has disappeared a bit since. I think they are a great idea. They make you feel part of the day. I was sat over the isle from Ian Gibson and chatted to people in front of me. Su got a big round of applause and opened the show. Come on Con organisers let’s see a return to this. 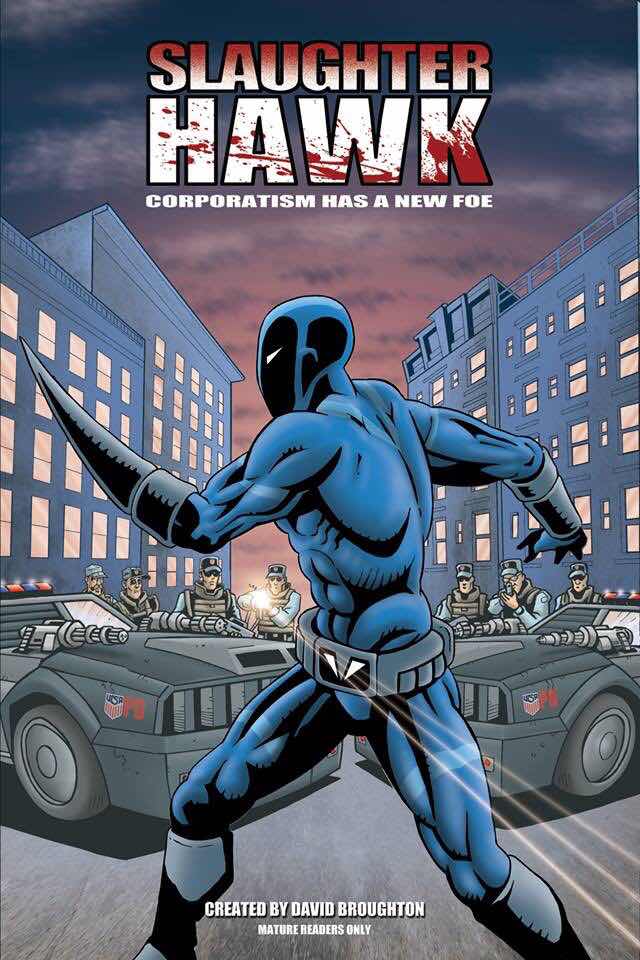 My first stop was our old mucker Dave Broughton. He and I did a just for fun Silver Surfer comic last year (If you haven’t read it yet then send me a message and I’ll give you the link) and he’s now finished his new superhero comic called ‘Slaughter Hawk’ and good god it looks ace. I grabbed an interview with Dave that’ll be appearing on a future episode of the pod and I can highly recommend anything he does.

Look for Dave on Twitter @DbroughtonDavid He and I may also have a super secret project bubbling that you should look out for.

Myself and Vince ‘Nu Earth’ Hunt then spent the whole day chatting and shopping. 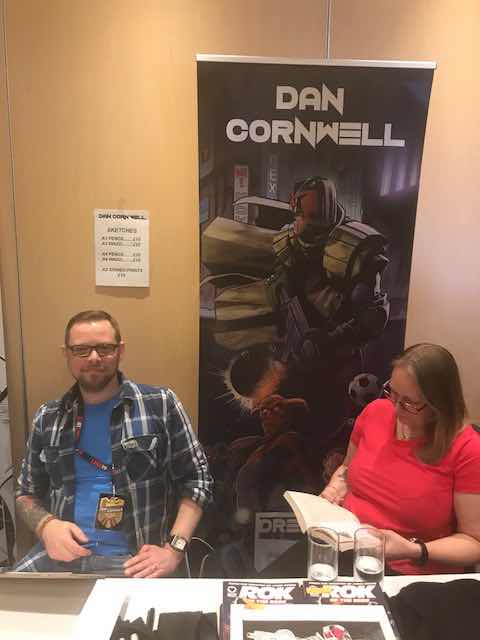 It was great to finally catch up with Dan Cornwell after we loved Rock of the Reds so much. I’d managed to interview John Wagner at Leamington Comic Con and John (and all attending) marvelled over the gorgeous artwork that Dan had produced. Dan was great company and even took my ‘What bus can I get to Bristol Parkway?’ And ‘Do you send three pages at a time into 2000AD when they don’t expect it?’ Bus driver jokes. (For those that don’t know Dan recently gave up his job as a bus driver to draw comics full time.) This is a creator that you need to pay attention to.

Find more about Dan at www.dancornwell.wordpress.com 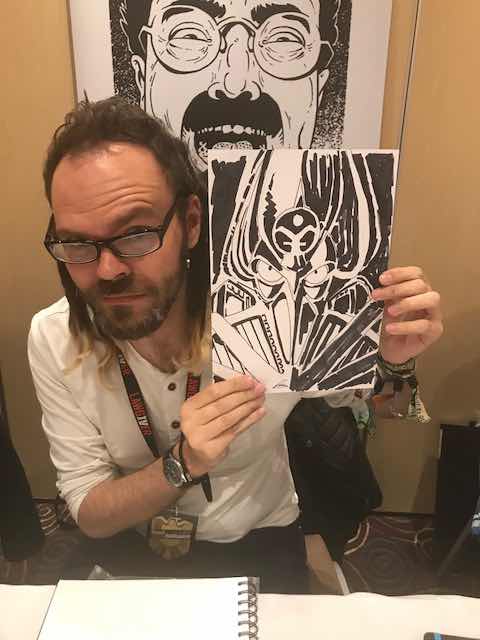 Next to Dan was Paul Williams who did me this excellent Torquemada head shot for FREE! It was great to hear that he listens to the pod and was introduced by our pal Gareth Hopkins. This geezer can draw. You can find some gorgeous examples of his black and white art (after a triumphant win at the 2000AD 2017 Portfolio Competition) and in the pages of the Prog itself. 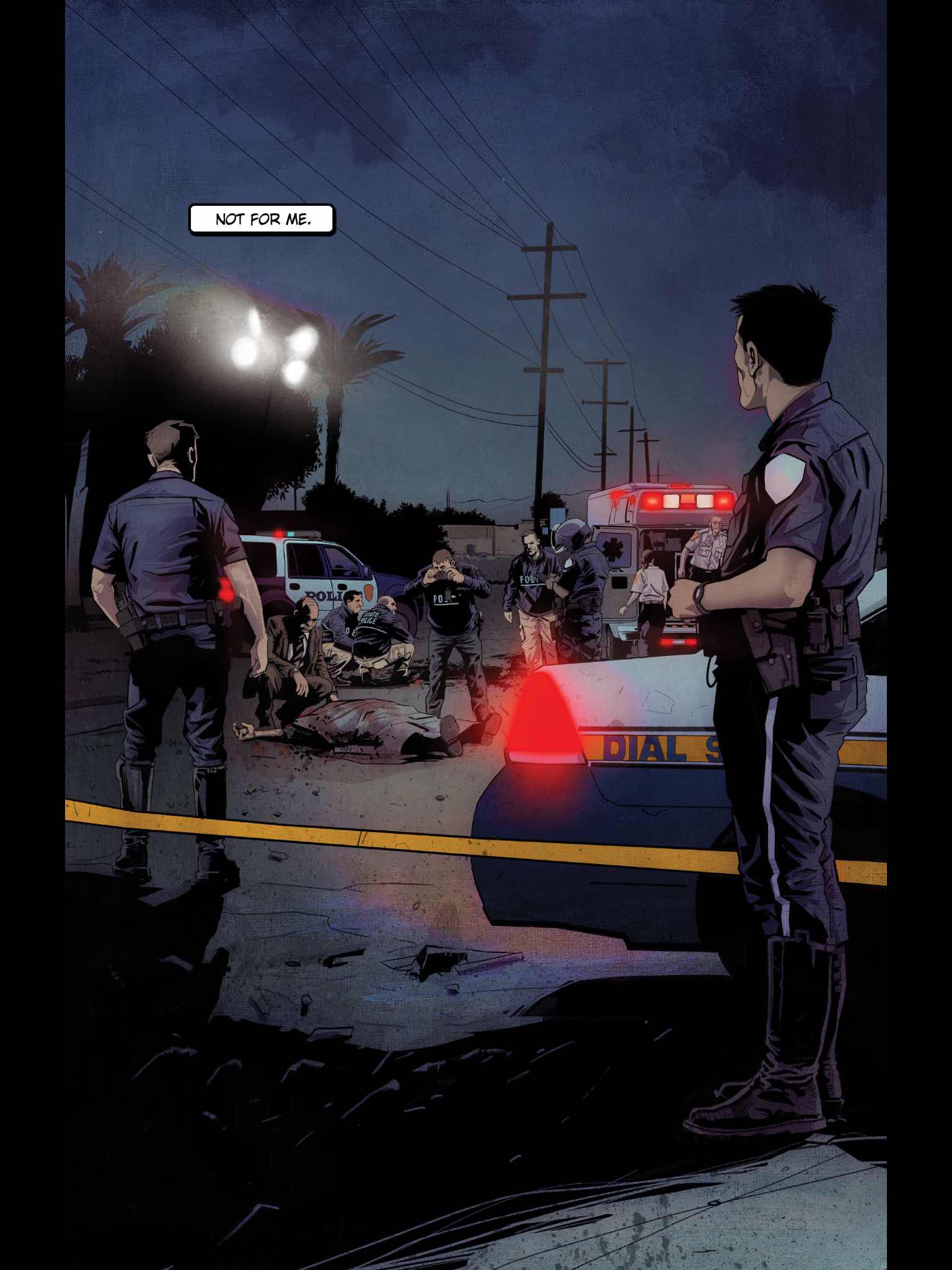 One seat on was the mighty Lee Carter (genuinely just these three guys would have made for an ace convention on their own). I bought a gorgeous sketchbook from Lee and he chatted about working for the prog and for the short-live 451 Comics publisher. I immediately then went and bought and downloaded his series Sunflower! Christ on a fucking trike it is beautiful. (No spoilers but he may be a guest on the pod sometime soon). 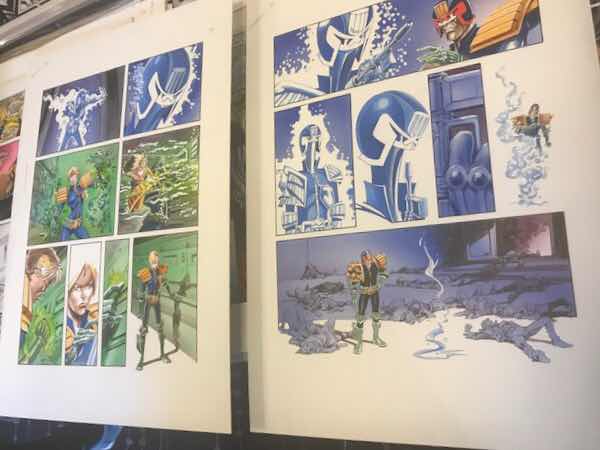 What followed was a long session of back issue and trade diving by myself and Mr Hunt. We both managed to fill our respective bags and also marvel at some slightly overpriced original comics art. 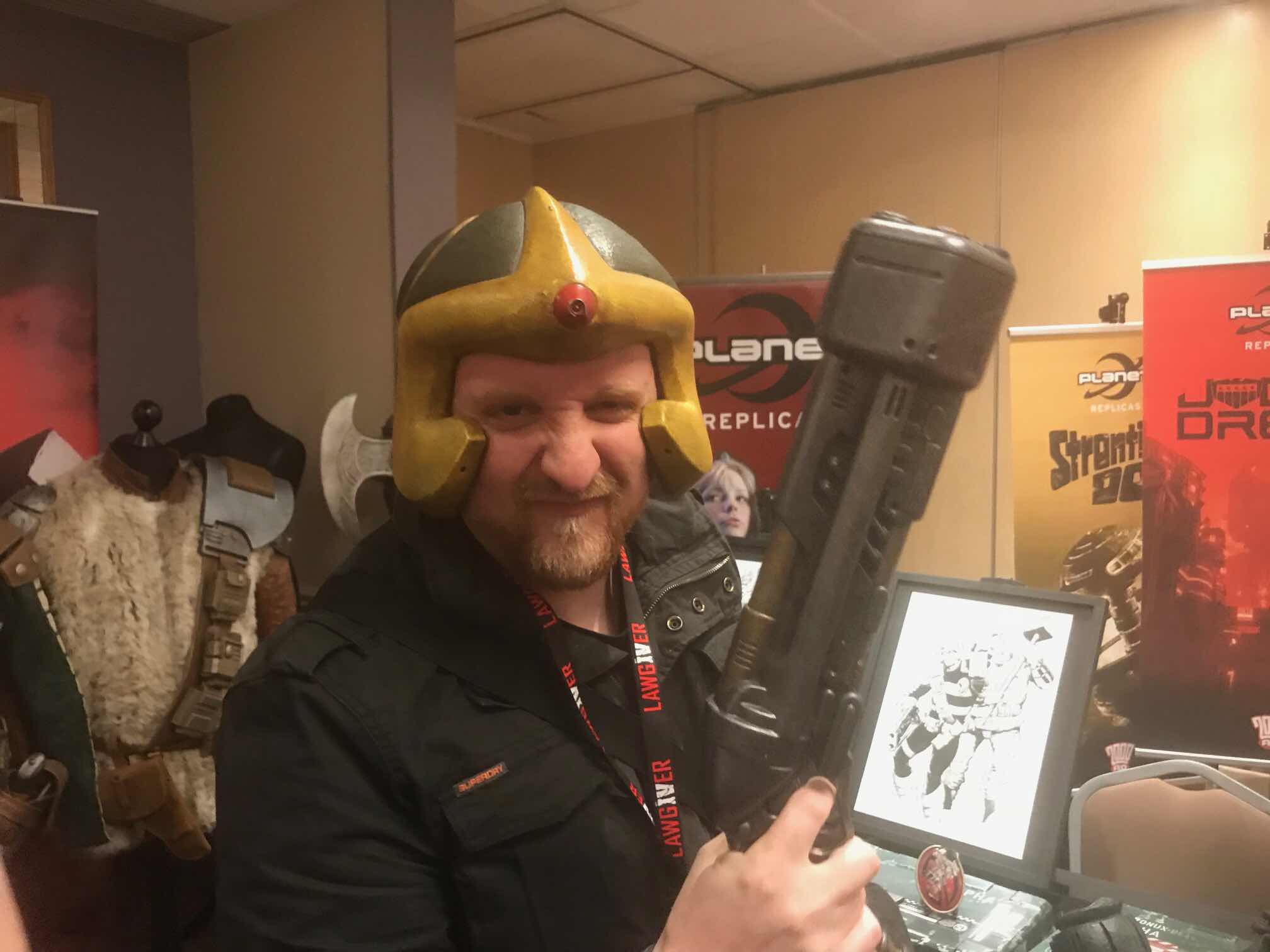 (Vince even tried on the odd Johnny Alpha prop!)

We chatted to some great people both old friends and new and it was like going to a comic conventionfrom the 1980s. One that included an awful lot of drinking! One that wasn’t full of plastic toys and stuff that basically wasn’t comics! You know what a grump I am but even the cosplay didn’t get on my nerves. 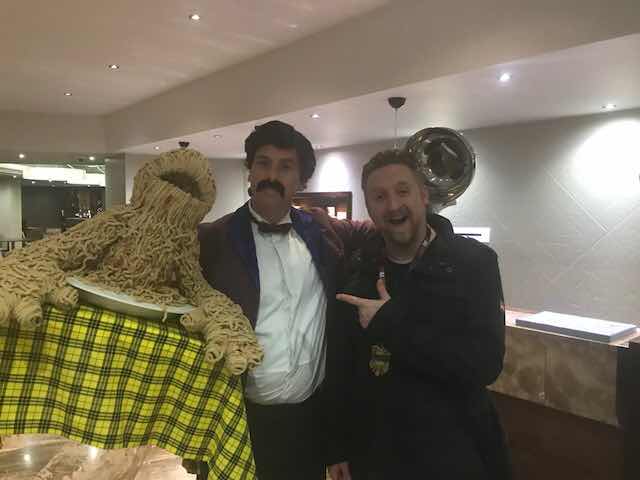 We’ve had a little look behind the curtain about what is being planned for next year and I promise that you won’t be disappointed! A lot of UK Conventions could learn from this fun day.

And who says beer is bad for you!!