When is a review genuine?

Yep. Back on the subject of reviews again. I’m asking a question of when is a review genuine and written without prejudice? Without a horse in the game? Without a few quid maybe being exchanged? When can you trust what you are reading or is it just a comment of a friendly aunt?

It’s nice to get a good review isn’t it. Something with insight and well written it lifts the spirits with a small dopamine dose. What it also does have is the propensity to bring eyes to the comic, series or creator. Some people live for that attention we see that every hour of every day on ‘Comics Twitter’ and elsewhere in social media. That crackhead need for someone to love us! Please say a nice thing!!! PLEASE!

Over the last few years I’ve been noticing the change in attitudes towards reviews. I’m sure you’ve heard or read me bemoaning the lack of actual critical analysis in comics these days. I’ve personally turned a corner and will now only be totally honest about a product. Scroll back and you will see a few examples. A piece written with no fear or favour. Without a sense that they are all mates and giving out cuddles for needy creators. If that’s what you want....show it to your mum and never sell it!

Comics reviewing is not and never should be a byword for promotion. But that is the way that they are being treated by many websites and publishers and how they are seen by many creators. Get a review and sell another couple of books? Maybe. Start getting your name out there, whether you are competent or not and there’s a chance that a publisher will spot you and consider paying you actual real money to make comics for them.

There’s also quite a bit of competition to get a review. There aren’t that many sites or reviewers these days. It can be difficult to get a review into print even when you send the site a hard copy - something that I have experienced this year a couple of times.

So what are we left with?

Sadly we are left with this. 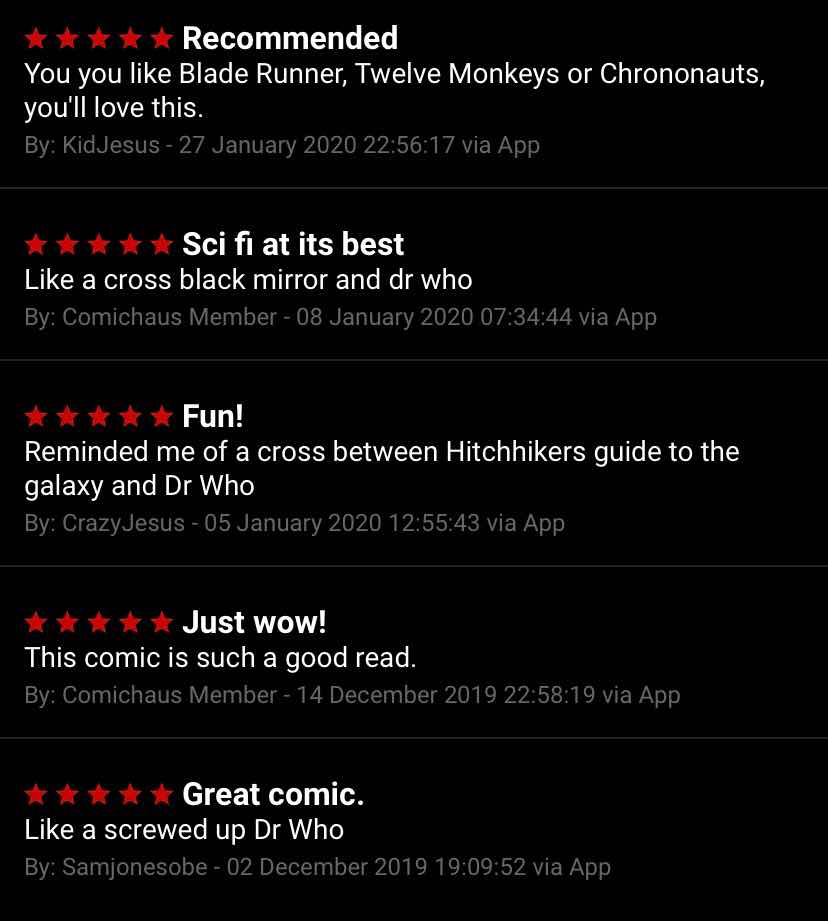 This is from the review section on the Comichaus reading app. (I took a screenshot before the comments were deleted by the app who spotted that they were fake). It is a series of reviews for the Markosia comic ‘Clockwork Inc’. Written by Stu Perrins with art by Ron Gravelle.

Before we examine the review linguistically lets make it clear that I have no data regarding who left these reviews. I can tell you that I reached out to Comichaus and they removed them and they were not responsible. I reached out to Harry Markos from Markosia who told me that he had no knowledge of them and I believe him. I also reached out to the writer Stu Perrins. He has, at the time of writing this, read the message but has not replied (proof below). I do not have a point of contact for the artist at this time. 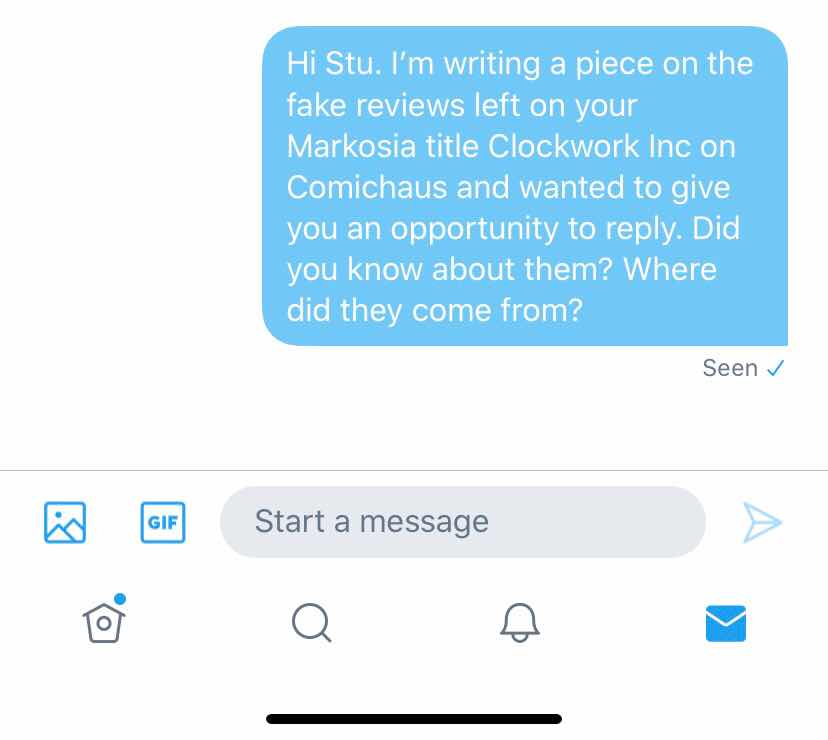 Comichaus is a subscription comics service who pay creators per click on views by subscribers. Full disclosure here that they also sponsor a podcast I am co-host on. The more attention you can gather to your comic on the site the more clicks it gets and the more money you make. There is a chart of the most clicked on comics as part of the home page set-up. You can register for a free month on sign-up. I highly recommend it as a great source for indie and small press comics at a reasonable rate.

It’s a great model but like everything seems to have been in the past hi-jacked with this sort of behaviour. (It is worthy of note at this point to say that the site has changed it’s protocols and will now spot this behaviour).

I first became aware of this particular example when the comic was unusually in the top five for a few months. It didn’t seem to have the quality of a book people would flock to and/or be read and reread and in doing so remain at the top but somehow it did. Who was clicking on it? I am not sure.

So I looked at the reviews.

They are all very short. They also appear to have been written quickly without a proofread. For example the repetition of ‘You you’ in the first review and a lack of full stops in three of them.

Two are written by ‘Comichaus Member’. I’m guessing that this is the default username on the site. This also shows a high possibility of rushed writing.

One is written by ‘KidJesus’ and one by ‘CrazyJesus’.  Maybe they are related?

Three use the incorrect spelling of the tv series Doctor Who and refer to it in three different reviews as ‘Dr Who’! this is a big signpost indicating that they were written by the same person.

Four of the reviews compare the comic to a TV series or movie - ‘Black Mirror’, ‘Dr Who’, ‘Twelve Monkeys’, ‘Hitchhikers Guide to the Galaxy’ and ‘Blade Runner’. Only once does a review compare it to a comic.

They are also written in a two month window from the start of December 2019 until the end of January 2020.

I AM NOT ABLE TO SAY WITH ANY CERTAINTY WHO WROTE THESE REVIEWS.

I will leave it up to you dear reader to draw your own conclusions. It may be a creator or it may be a friend or relative. Or it may just be someone thinking they are doing the right thing?

I looked at the reviews on the Comichaus site for other comics written by Stu Perrins. And look at this! ‘KidJesus’ turns up again in Megatomic Battle Robot 1 as well as the anonymous ‘Comichaus Member’. How miraculous!

Stu Perrins also wrote a story in issue 12 of the Comichaus anthology. ‘KidJesus’ rises again like ‘KidJesus’ at Easter. This is again a short review that doesn’t say much.

In fact quite a few of Stu’s comics have very short reviews written by anonymous Comichaus members who have nothing written on their site profiles. No website, social media or identifying biographical material. One might assume they were created during the free trial period and then left? I’m no expert. Linguistically they use short statements/sentences that only say how great the book is and all give five star reviews. 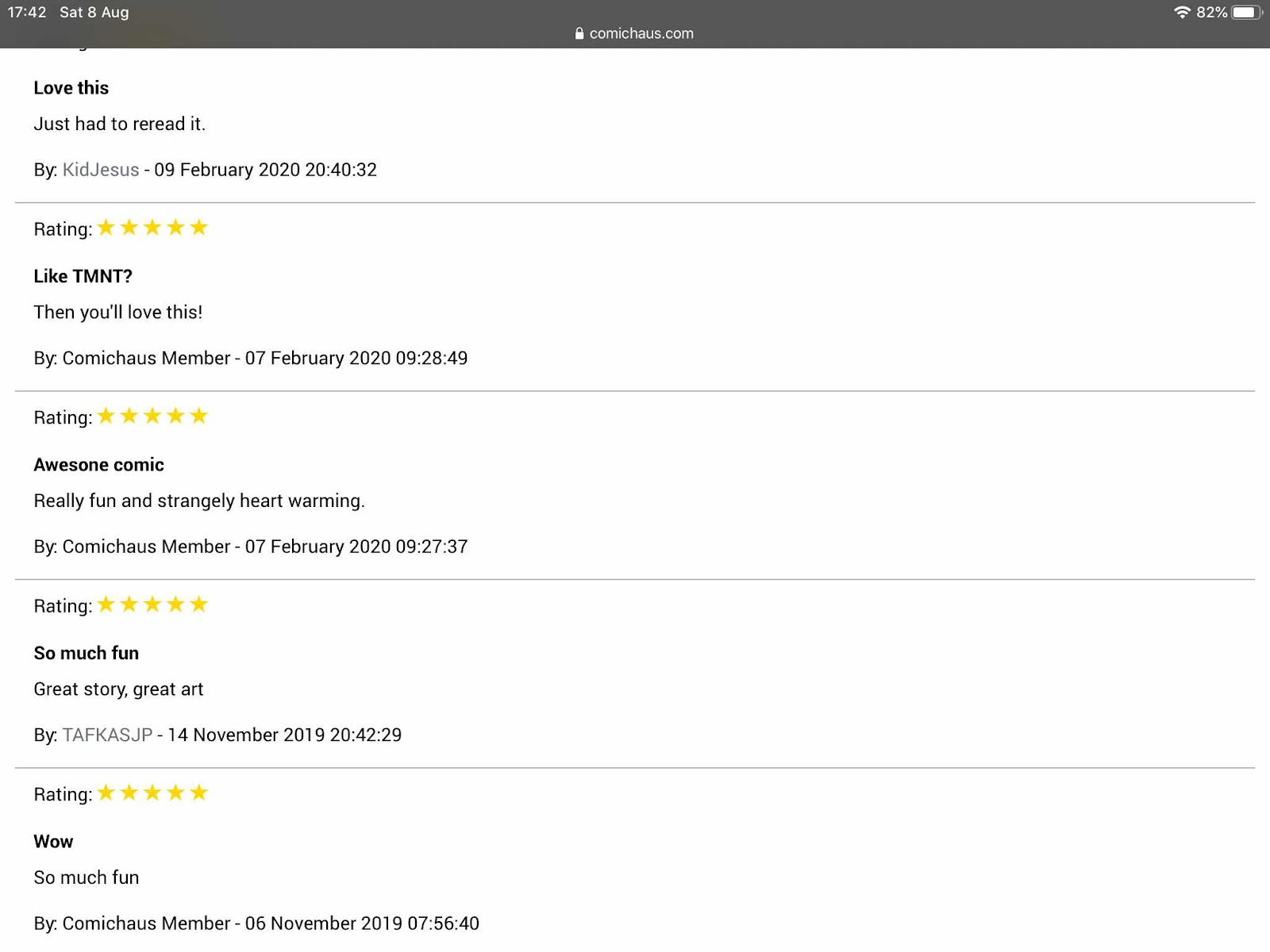 In fact - Everything is a five star review. How lucky can one creator be!

If somebody is benefitting financially by falsely creating Comichaus free accounts, leaving a review and then closing it down then this is highly unethical. (At least).

Why post numerous reviews of your own or friends comic? It’s can be both financially beneficial sure but you can also include in a CV or application that you have such great reviews and are clearly a creator worth working with? When there’s a good chance you are not.

It is also cheapening the reasons that we post reviews. Listen, I’m no naive millennial and understand totally that this goes on throughout the media world. I hear that Amazon will pull reviews if multiple ones appear from the same IP address. I’ve also seen a number of podcast reviews that have been written by somebody with an Apple Username that is basically the name of one of the hosts!

But it’s still jolly bad behaviour if you ask me!

I received a reply from Stu Perrins. I’ll let it speak for itself as I’m not completely sure I know what it means.