Hi all.  This is another in our semi regular Boy Wonder Reviews.

This week we have chosen the New 52 Teen Titans issue 1. 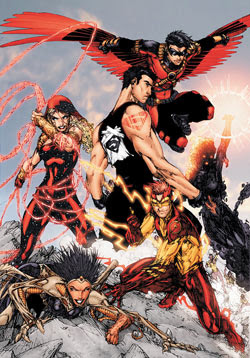 In this first issue of the new Teen Titans series they introduce all the known characters but don't seem to give any info about the others who are shown on the front cover.

I especially like the new equipment for Red Robin.  The bullet proof wings are a brilliant idea.  The writers seem to have Wonder Girl be the polar opposite of how she used to be.  She actually starts off by stealing a car.

I don't like the speed at which the story progresses.  The entire comic didn't really seem to go anywhere and I wish that they had at least dropped hints about the future storyline or the newer characters. 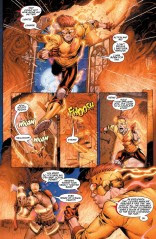 The art is brilliant throughout with lots of detail and good colouring.  The colouring is great on the new costumes.  I especially like the Flash's costume.  I like the realistic looking armour on the costumes as well.

If you want to get back in to The Teen Titans this is a good place to start.  I will continue to buy this comic and enjoyed it.

PS.  Look in the background on page 11 when the cop gets out of his car to see the Hooded Woman.