In Review - ‘The Bog Road’ by Barry Keegan. 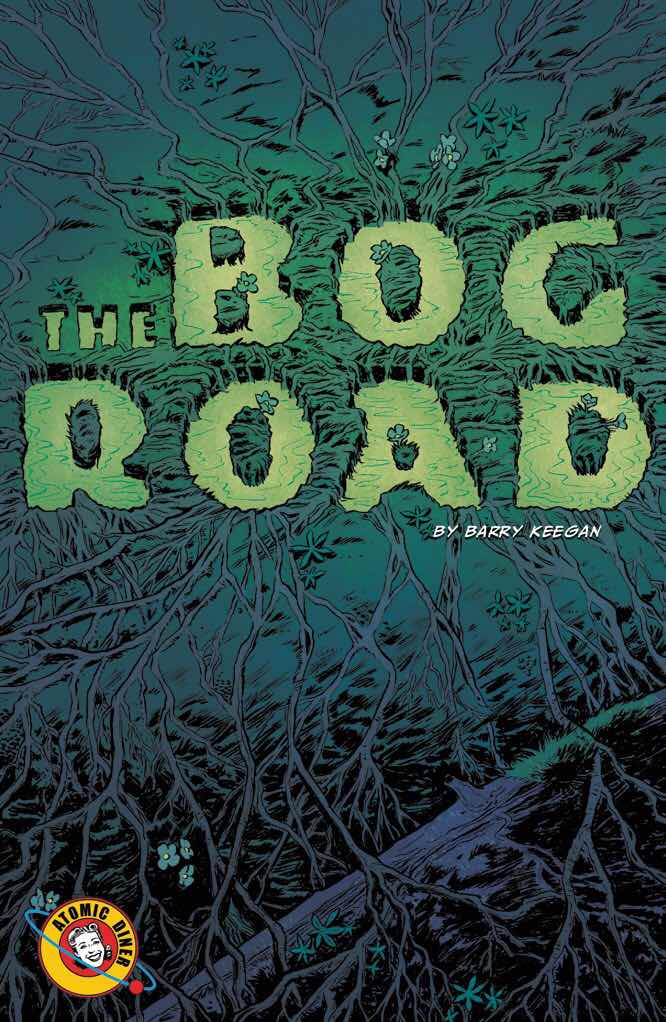 Written and drawn by Barry Keegan.

‘Laois, a little known county in Ireland. For over a century an uneasy pact has kept the peace, until now....’

The Story - We are in Ireland, in County Laois. The reader watches a man head down to a bog at night. You notice a standing stone has strange carvings on it’s surface and it sits next to the spot where this man calls out for the ‘creature’.  And so, something rises from the bog, a being seemingly made of the greenery around the man but with a magically sinister aspect. His aggression is evident as he kicks the man to the ground in a fit of anger.

People are dying on the road that humanity has dared to build through this bog land. The creature is violent and to be feared. You then are taken through a series of flashbacks to the dawn of Christianity in Ireland and how at a point before this the creature known as Na Sliogan was worshipped by the locals as a god before being chased off to hide under the water and earth.

The man calling on Na Sliogan is one Jim Brachan. He and his forefathers have a history and a connection to this creature. But the creature turns his back on Brachan. You see that something will be coming to a head soon. A battle between the modern and the old and magical is about to happen.

In the land there are other interested parties watching and waiting. Who will join the fray.....? 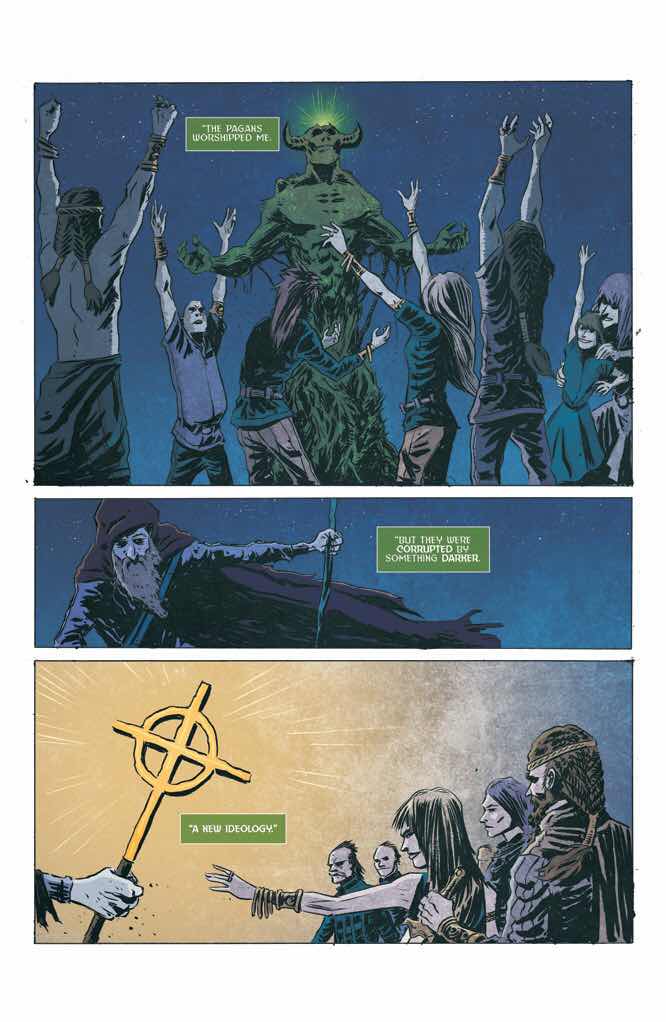 The Review - The above is a teaser rather than a story explanation and that is something that I do with total purpose in this review. This is a book that surprised me with it’s folklore beauty and brutality. It walks that line of talking about a magical reality and balances it with the dangers this world faces when it rubs up against the cold hard reality of our stupid, stubborn and unimaginative world.

This is a book with messages under the art. Immediately you are taken with the theme of destruction of the environment and the forgetting of the lessons of the past. We see the actual and fictional world as one as man grabs the odd JCB and attempts to destroy and reshape. One moment has Na Sliogan tied to a railway track staring down the headlights of an intercity train as it hurtles to kill him and his natural world. The imagery of progress against nature, beauty against hard steel, peace and violence is really interestingly realised in this comic. It is done neatly with heart rather than cold satire.

I also loved the folklore angle that Barry takes in this story. After writing this review I’ll be straight off to research what he draws from in this story. Na Sliogan is not the only beast or fairy or folklore legend we see in the latter two thirds of the story. In fact the creator saves some outstanding character designs for some of the later stages in the story and in holding them back he makes the ending even more richer. 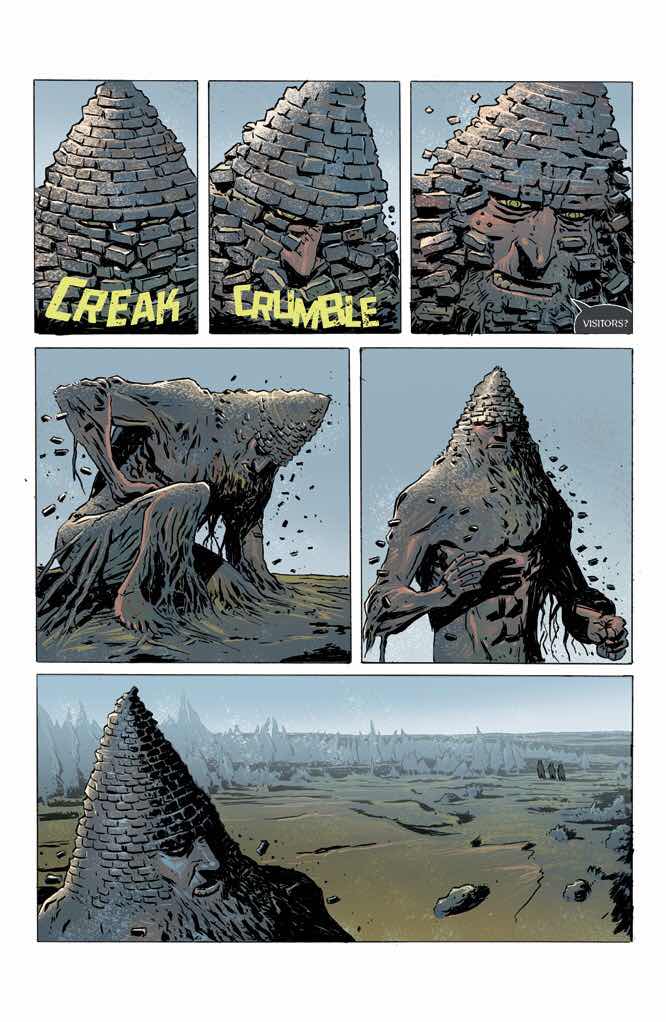 Barry also seemingly plays with speech and styles of communication. The conversations of the modern townspeople have a rhythm that is totally in keeping with what we hear today but he holds onto a tighter and more dramatic rendering of speech for the mystical creatures. This is the sort of speech that is almost Shakespearian but also has a taste of that echoing and distant style of speech that Gaiman used when writing similar beings in The Sandman. Meaning is drawn out in different ways in different environs. You hear the words and the meanings differently.

There is also a clear love of Ireland in this book. The land, the history, the myths and the modern world. We even get a map in the back pages, who doesn’t love a map!

The art reminded me a little of Charlie Adlard but with a softer edge. There are some excellent character designs on show and a couple of little nods to other stories (I’ll leave that to you to work out). The colour has a sense of character in the darker tones used to show dusk and night and the green beauty of the countryside. Some of the character designs are also really well prepared and are all different but seem part of the same world, I’ll let you discover for yourself how that is realised.

A couple of moments could have done with some pacing differently, for example the end seems to cram a little bit too much into the final pages but it did leave me with a smile on my face, so what else can you ask for? 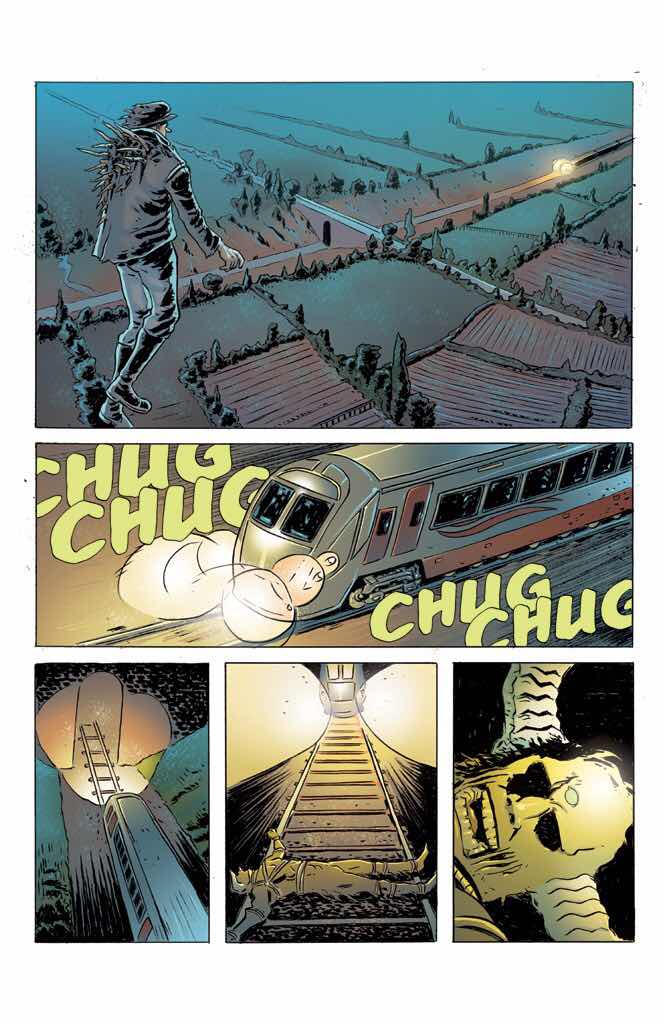 You can get this through Barry’s website at www.barrykeegan.com and it links through to Sub-City Comics who will supply you with a hard copy (I just ordered mine).