Yeah. We all miss him. ROM was a creation of Bill Mantlo and Sal Buscema from a short lived toy line.  They crafted a great mythos from a pretty simple looking toy. The comic series well outlasted the toy line and ran for 75 issues.  It is highly regarded by most of those that read it and was reprinted over a number of Marvel UK books in the 1980s (Forces in Combat and the Star Wars comic ran it as a back up for a while).

There has been another peak in ROM The Spaceknight nostalgia with the semi/possible (?) cameo on a wall of the head (in a photo?) of this character in a recent Avengers book. So because of this I decided to give an old random issue a try, having nor read any for quite a few years. I wanted to see if it still had that old magic? 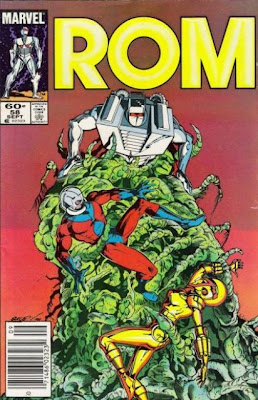 This story is actually pretty cool and represents a kind of super-hero / alien invasion environmental disaster along with a monster movie. ('THEM' was clearly an influence.) 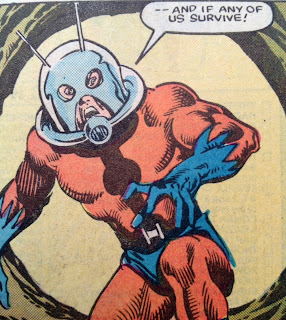 The issue opens with Ant Man (Scott Lang) flying into an army camp where Alpha Flight are being patched up. They along with ROM and Starshine (his fellow female and sometime love interest co' Spaceknight) have been fighting a Wraith (the big bad throughout the series) Spirit that has destroyed a town. With Alpha Flight out of action Ant Man steps in and he and the two Spaceknights shrink down to battle some infected insects. After an impressive battle ROM and Starshine shrink further to attack on a sub atomic level and Ant Man leaves to 'Warn Humanity.'

Bill Mantlo writes the ever loving fuck out of this book. Sure some of the dialogue is dated but we actually get some great comments and discussions between characters (the Alpha Flight moments are probably my favourites). The book hurtles along at a great rate and it reads like one whole story in the midst of an altogether bigger saga. Every page has me grinning.

The book also reads like an environmental warning long before that was so trendy to write about in books like Brian Wood's The Massive and such like. The Wraith threat takes many forms throughout the 75 issues and in this one it is threatening the planet's eco system. The two Spaceknights and Ant man (who was pretty under used during this period) fight to hold the line against this threat. 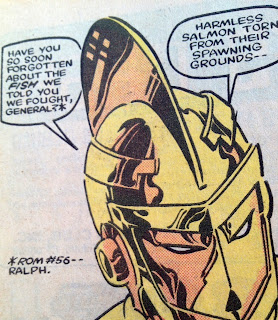 Halfway through the book I literally looked up and thought 'Why the fuck isn't this the norm?'. Books should be like this now! (Fuck all that 'lets take 4 years to tell one story')

If this book was written today all the message boards and news sites would be going ape shit for it. They need to sort out all the legal BS and get this out in a nice big hardback, followed by an Essential phone book treatment. I would buy both. Giant Wraith ants! (Need I say more?) 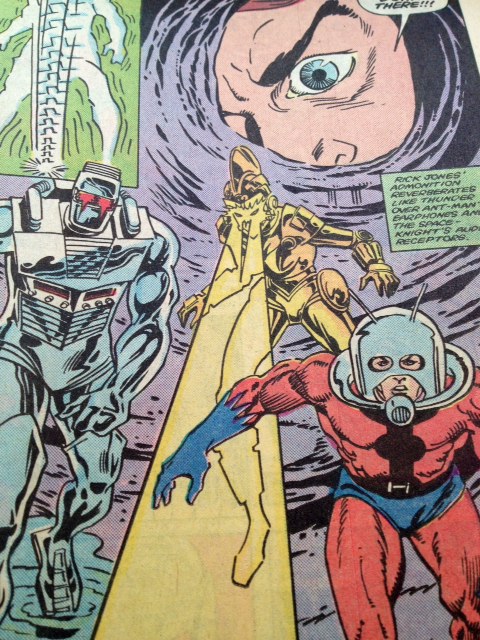 The art is also a big part of the pleasure in reading this. Sal Buscema is a master story teller. In the days when double page spreads were not the norm the 'Battle Beneath the Earth Begins' pages are breathtaking. Everyone reacts and moves how they should and many modern artists need to see how masterfully this is done. Sal has always been to me the forerunner of artists like Darwyn Cooke and Chris Samnee. His work is always a pleasure to read.

I am pleased to say that this was not a disappointment and surpassed my expectations. It looks gorgeous, it's packed with story. The team-ups are really interesting. I may well go through some long boxes to find some more.