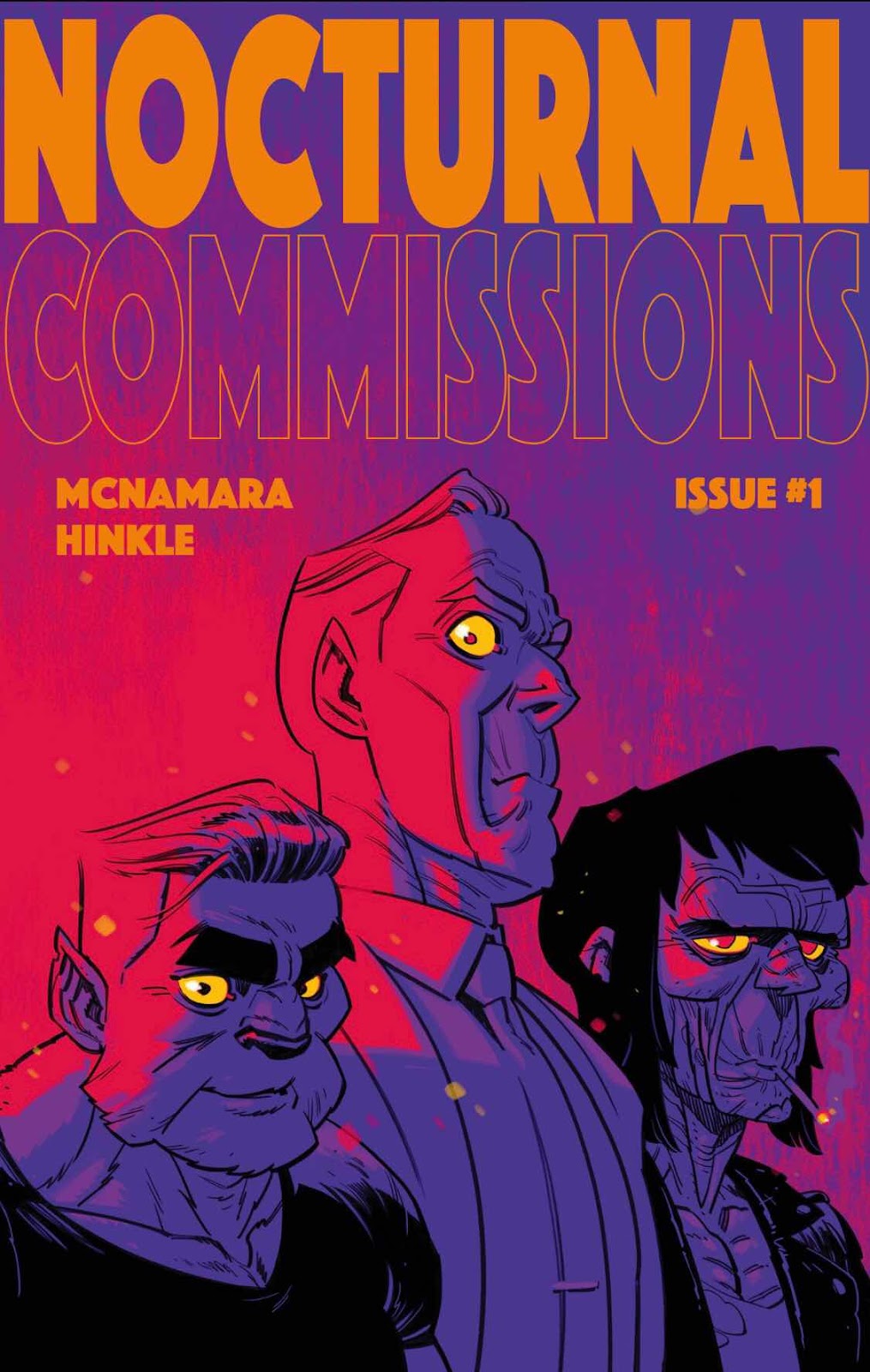 The Story - ‘Are you being trolled by ghouls, pestered by the paranormal or attempting to file taxes after being resurrected? Nocturnal Commissions is the only agency with the expertise to help. A Wolfman, Vampire and a Zombie are ready to solve your supernatural concerns for a very reasonable rate (plus expenses).’

This takes place shortly after the formation of the aforementioned agency and just before Alton Allen (Zombie) meets up with Dr Bradford Peterson (Vampire) and Mathias Tillman (Werewolf).

The Review - This book sure came round quickly as it feels like I only backed in on Kickstarter about a month ago. (I just checked and it was funded on the 27th of Feb!) I’m a fan of Greg Hinkle’s art after seeing it in Airboy from Image Comics a few years ago. I’d also read and reviewed ‘Sucker’ written by Jason McNamara last May and really enjoyed what he had done with that story. (You can find the review of that here http://neverironanything.blogspot.com/2019/05/sucker-volume-1-living-after-midnight.html ). 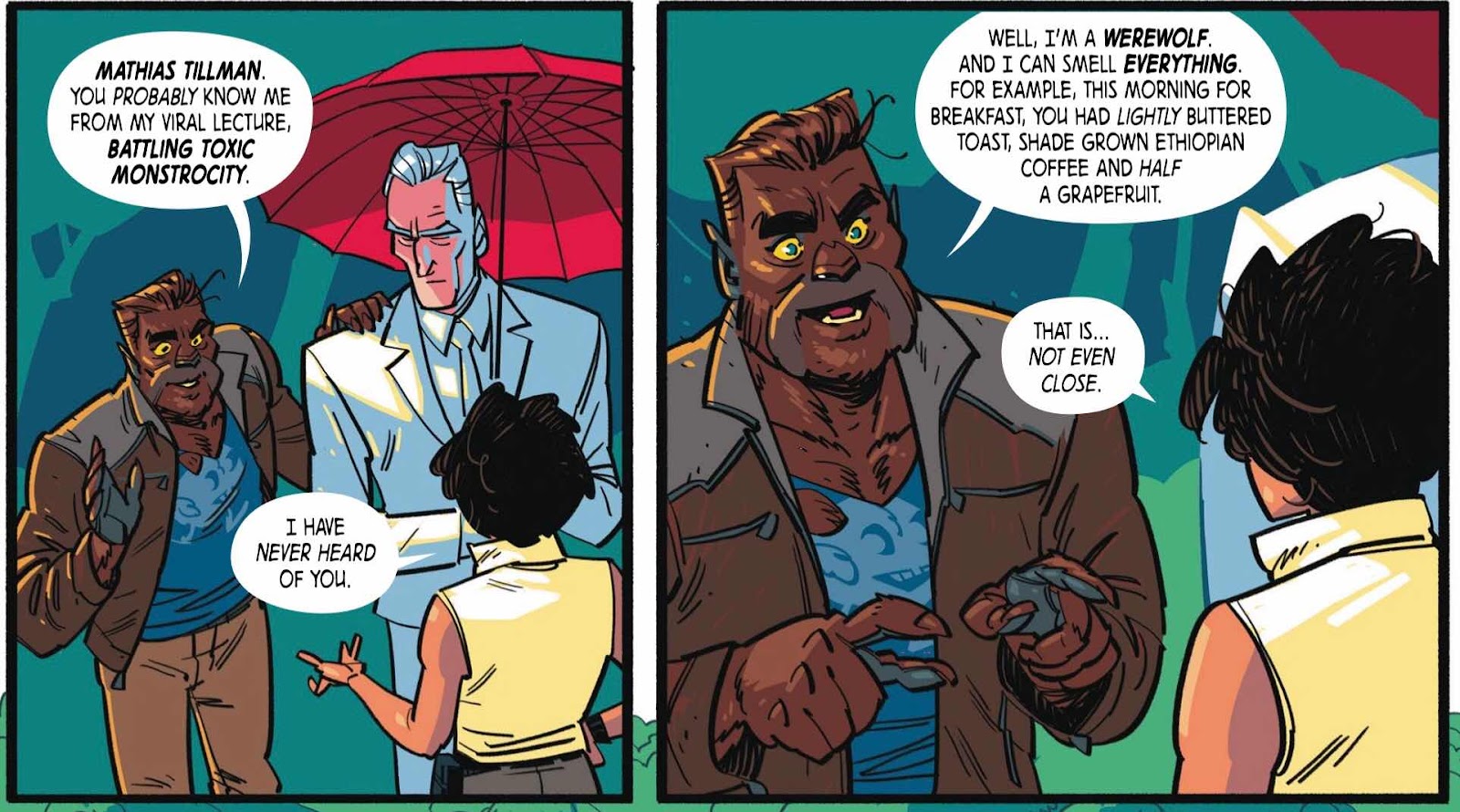 The story opens with a mostly wordless sequence on a submarine that erupts into violence through a werewolf infestation and then heads off to a private island that is off the grid and then shows the arrival of Peterson and Tillman and the beginning of their ‘investigation’. The werewolf hippy and the pompous Vampire make a brilliant double act in this story and their interactions are the source of most of the funnies. Seems like they couldn’t detect their own backyard and go about their business to half attempt and half con their customer.

I have to say that this first issue was a blast from start to finish. It is however a series and you might find it ends a little abruptly and then heads off into a series of pin-ups/variant cover gallery. For my tastes it could have done with a ‘To Be Continued’ panel as I was caught a little off-guard. It’s probably fair to say that in this comic the story takes a back seat to the character work. This works really well as a narrative choice and you find yourself walking in the steps of these professionally incompetent but pretty deadly berks. You do feel a genuine affection for them that will have me coming back for the rest of the series.

Seriously, it’s rare that I laugh out loud when I am reading a comic but this one got me at least twice.

The art from Greg Hinkle is that class combination of cartooning and action. He makes everyone’s image lean just perfectly into their character and his designs, especially the transformed vampire, are cracking. The look and style of the art walks a clever line between Horror, Comedy and Action. There’s a freshness to the approach. 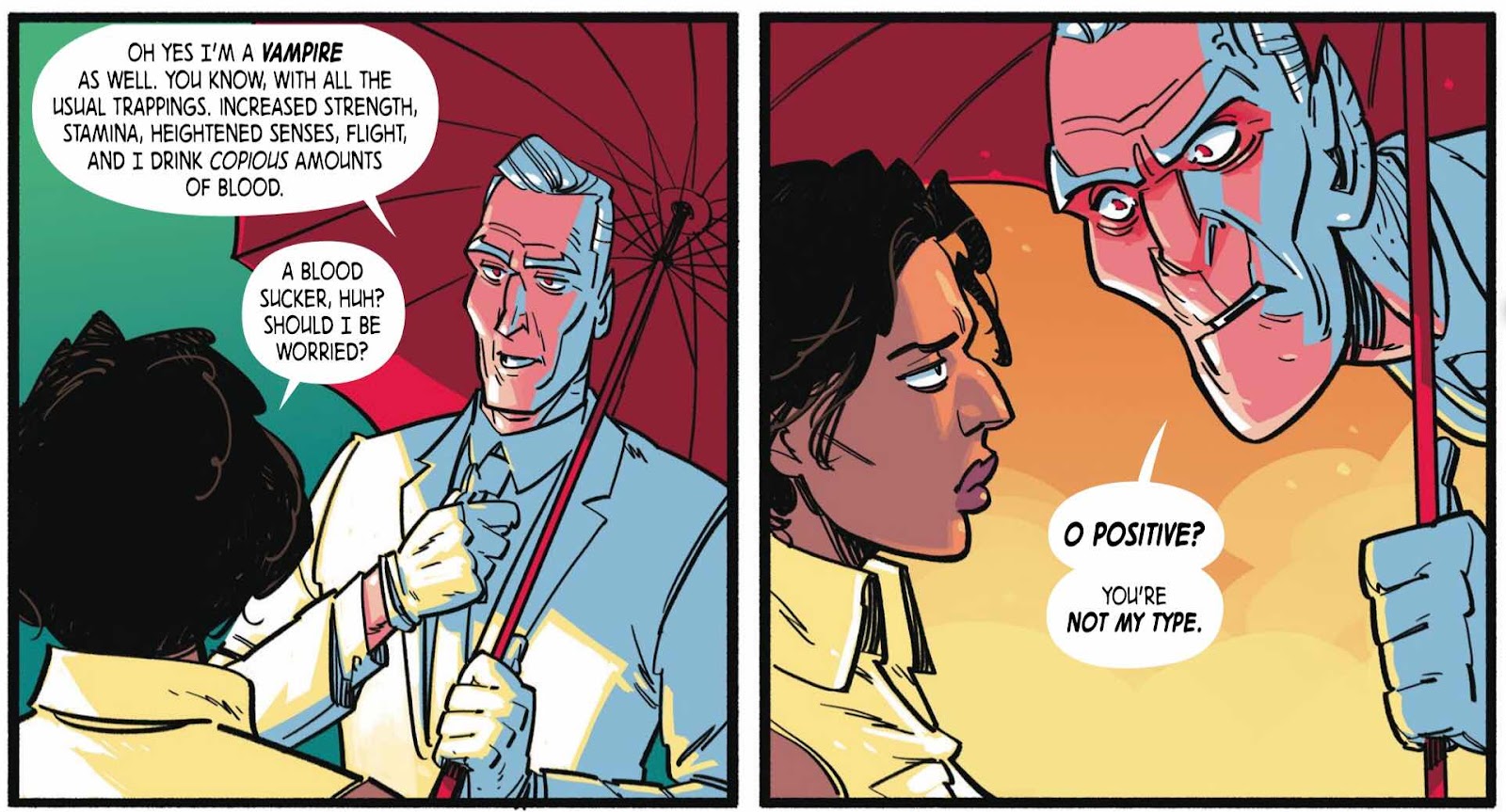 The colours (with flatting assist from Paul Little) are just excellently rendered in the nighttime scenes especially. There’s a gorgeous use of blacks, greys and blues in the moonlight with a strong splash of bright red Giallo homaged blood. The colour has an occasional limited palette depending on the story and setting. Keep an eye out for the flashback pages showing Alton Allen’s pre-Zombie punk band origin story - there’s a lovely use of vibrant yellow/green light in a creepy lab scene!

Jason McNamara (writer) previously co-created The Rattler graphic novel with Greg Hinkle. He is also the graphic novel author of The Cicada, SUCKER, The Crossing, Abandon, From Mars with Love, The Martian Confederacy, Short-Hand, Continuity, First Moon and Less Than Hero. He teaches comic book scriptwriting at the Pacific Northwest College of Art in Portland, Oregon. You can find him online at http://jason-mcnamara.com/ and on Twitter @JasonMcNamara

Keep an eye out for the next Kickstarter. Here’s a useful link https://www.kickstarter.com/projects/ramonesome/nocturnal-commissions-a-ghoulish-comic-book-adventure/creator_bio

Greg Hinkle (artist & letterer) Greg co-created The Rattler with Jason, and was the artist on AIRBOY and Black Cloud, both published by Image Comics. He lives in Los Angeles with his wife Shay and dog Penny.   You can find him on Twitter @greg_hinkle