‘For Molly’ by Gabe Cheng and Benjamin Sawyer. 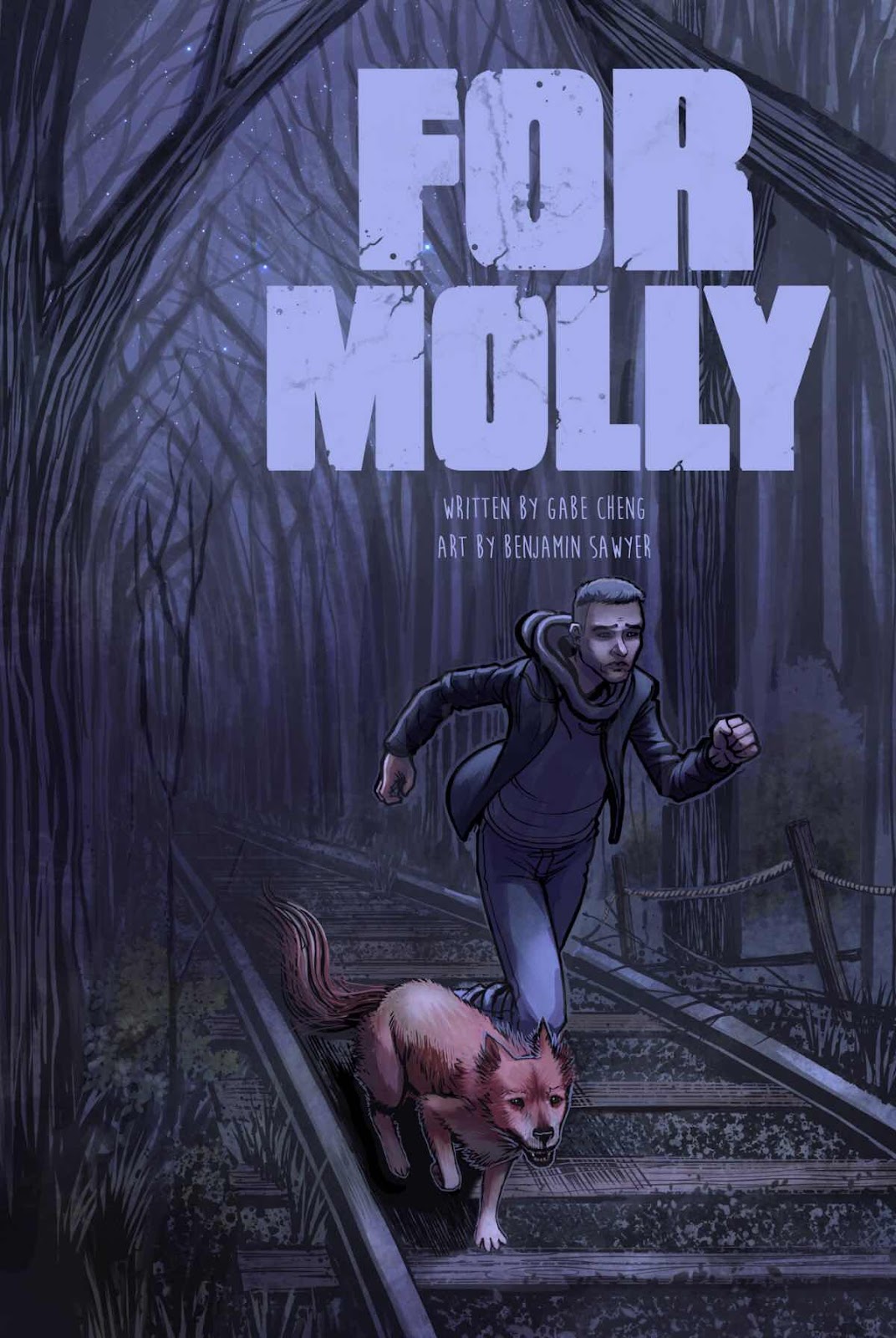 The Story - ‘For Molly is a fantasy comic that takes place in modern New Jersey. An anti-social talking dog named Molly helps a recently divorced New Yorker named Greg rescue his sister from an evil that lurks in the forest. It’s got action and adventure, a rogue cop wielding a sword, a pack of feral talking dogs, and hidden cabals of forest dwelling humans that are both unpredictable and dangerous.

At its center are two lonely characters with a lot of baggage. The story explores themes like guilt, abandonment, and loyalty as Greg and Molly’s unlikely friendship is tested on every step of their journey.’ 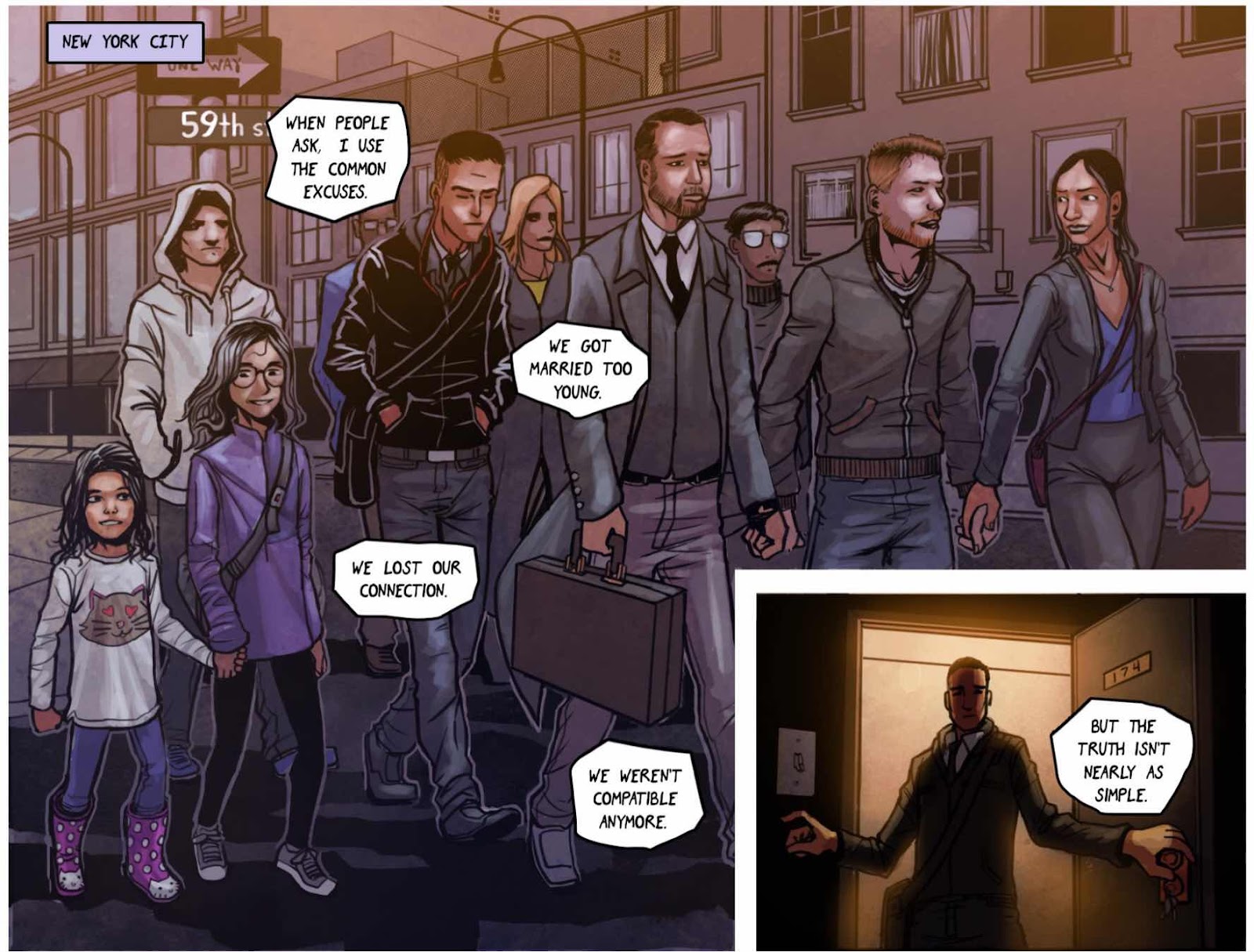 The Review - The writer of this contacted us at The Awesome Comics Podcast last week asking if we fancied reviewing ‘For Molly’. The second issue is due to go live on Kickstarter any day now and the summary definitely had me intrigued. The book does however open a little strangely. Rather than have the variant covers, commentary on the creation on the book and the ‘Thank you’ page of names at the end of the comic Gabe puts them up front. This makes for a few page turns before you reach the story and I found it mostly a dull interlude before the action began, which took quite a while.

The main cover itself is a little misleading and this may be purposeful. It shows Greg and a dog (more from him later) legging it along an apparently abandoned railway line. It doesn’t even hint at the mystery or fantastical elements inside. (Also - that railway line is unusually thin and clean looking?)

In the ‘Forward by the Author’ you hear about how this story had a lengthy history as a pitch for a screenplay and not as a comic. Gabe pursued this for sometime but after what he felt was a disastrous reading of the script by actors he followed the comics and Kickstarter path. This is all well and good but he stops in his story there and doesn’t tell us comics readers what went into making THE comic! I’m afraid that we’re at the point now where the fact that this started as a screenplay impresses nobody, in fact it goes a fair way to putting me off a project. Comics should never be the second choice in my opinion.

The first few pages are a pleasant surprise and whilst the art isn’t perfect it has three elements that I personally always enjoy in a COMICS (not a screenplay) story. Rain, an inner monologue and a dog (who doesn’t love a dog!) The rain and the dog look fine but the balloon choice for the inner monologue could also do with a tweak as I had to spend a few minutes figuring out if it was actually those inner-thoughts or some radio signal/transmission of some time. That’s the nature of the slightly oval yet angular balloons that the letterer (none are credited) chose to use. The creators also need to be careful with the kerning and size of the words. Especially in moments of high drama the letters could do with being larger to emphasise the emotion.

The first ten or so pages set the scene of how Greg has split up with and just that morning signed the divorce papers with his wife. He’s depressed and gets a visit from his two sisters. I found this section dragged and was full of stiff forced language and an overly repeated emphasis on dull platitudes.

‘You have to forgive yourself’

‘You think you deserve to be punished’

‘I hurt someone who loves me.’

On page 14 that dog turns up again. Things are looking up! It then takes to page 17 (of a 34 page comic) for anything of real note to happen. The story then takes the front foot and punches ahead with much better pacing and we begin to see the start of the story arc. The issue ends with a fight/flight sequence in the deep woods and the hint of more danger ahead. 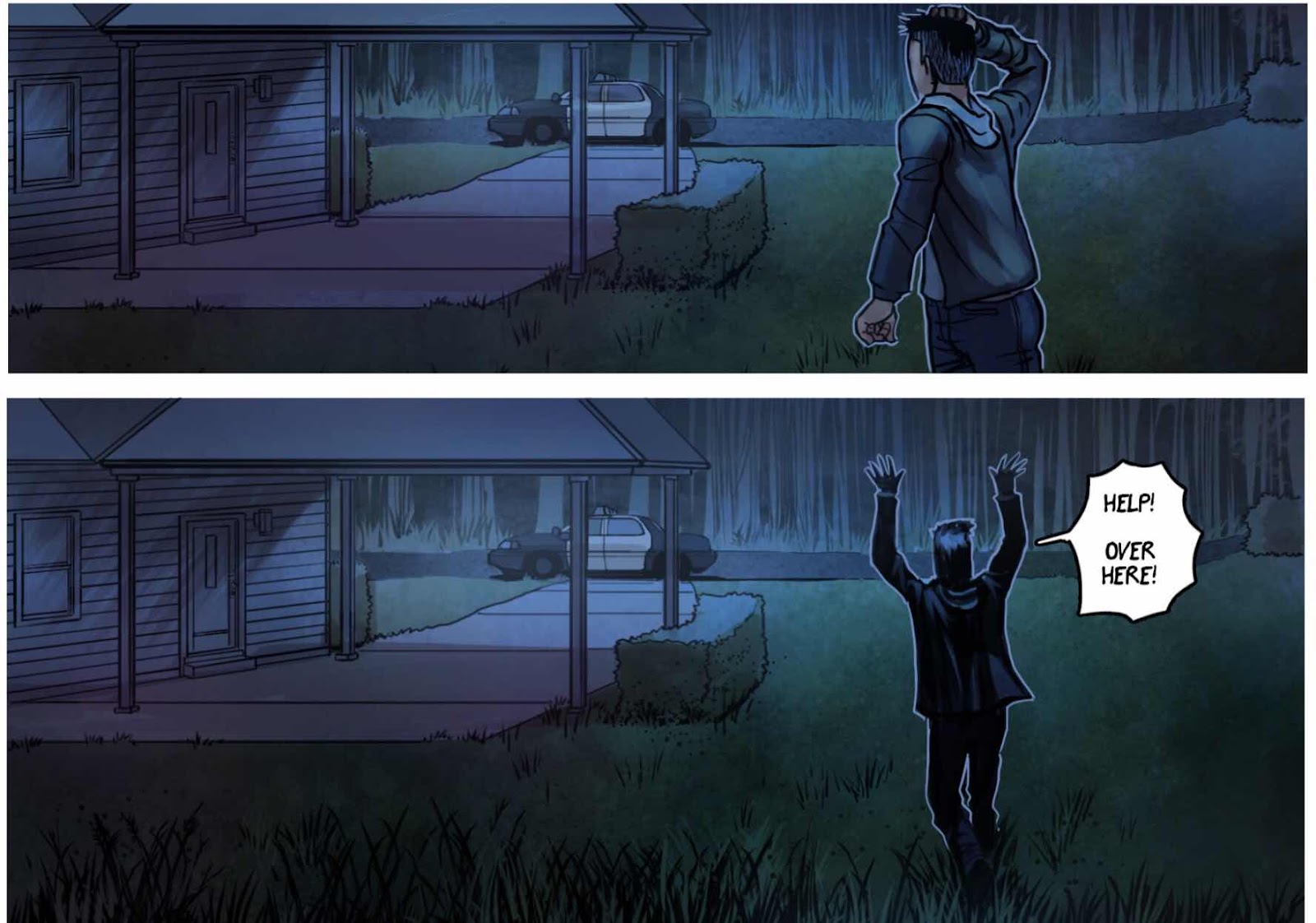 The art is fine and has some great colouring that sets out a rainy night in the New Jersey woods excellently. However much of the figure drawing feels a little stiff and much of the body shapes feel like they have been created on a factory line for mannequins. There needs to be more personality in their faces and their movements as well. There are a couple of pages of character designs in the back of the issue but I have to admit to letting out that audible groan again when all they do is talk about the actors and directors they are based upon. 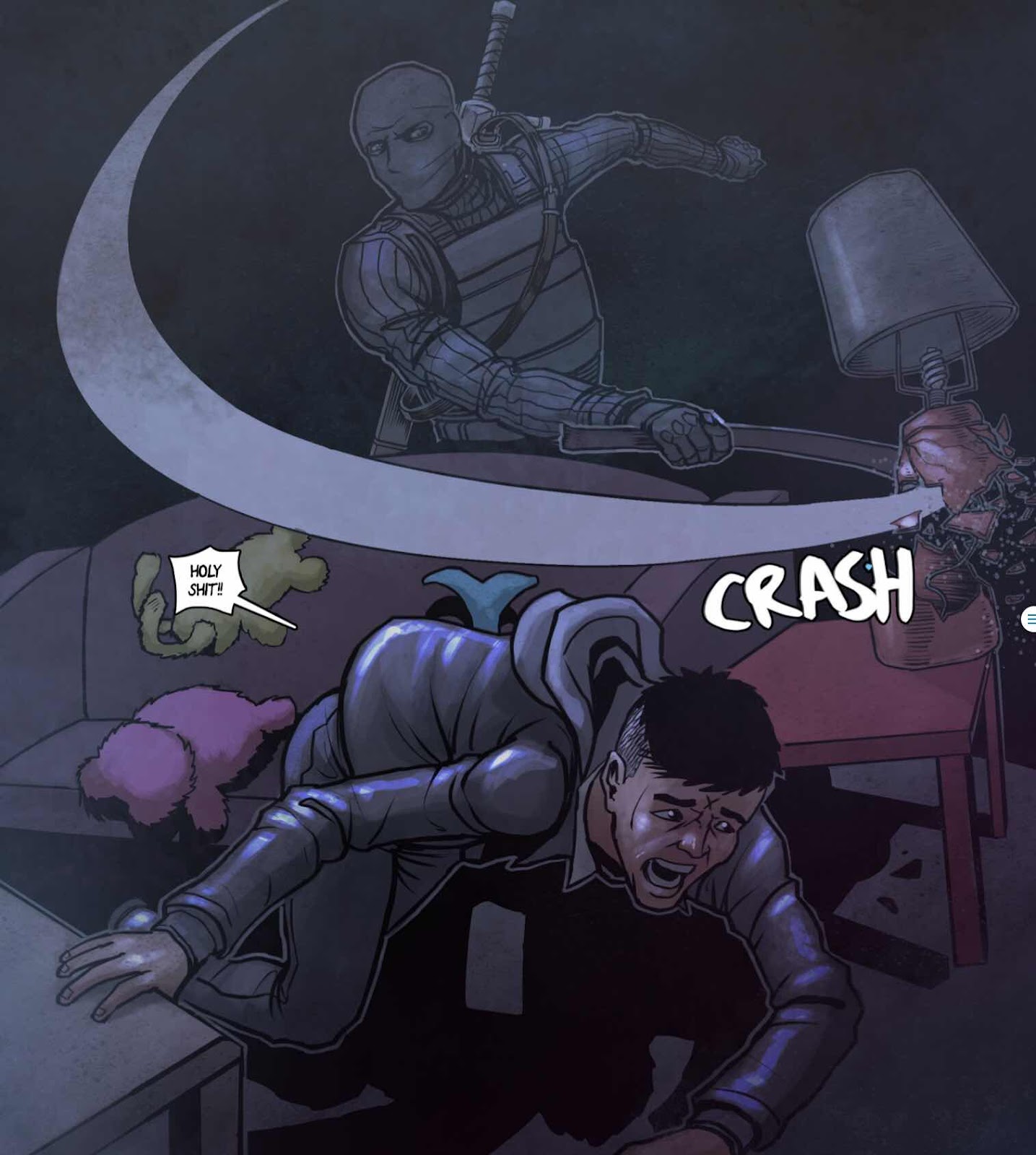 This is another example of a comic that could do with the eye of an experienced editor as it is being created. Gabe admits that he is new to the game and min my opinion he could do with some guidance.

If you like talking dogs this may well be up your alley. For me I’d find it hard to recommend I’m afraid. 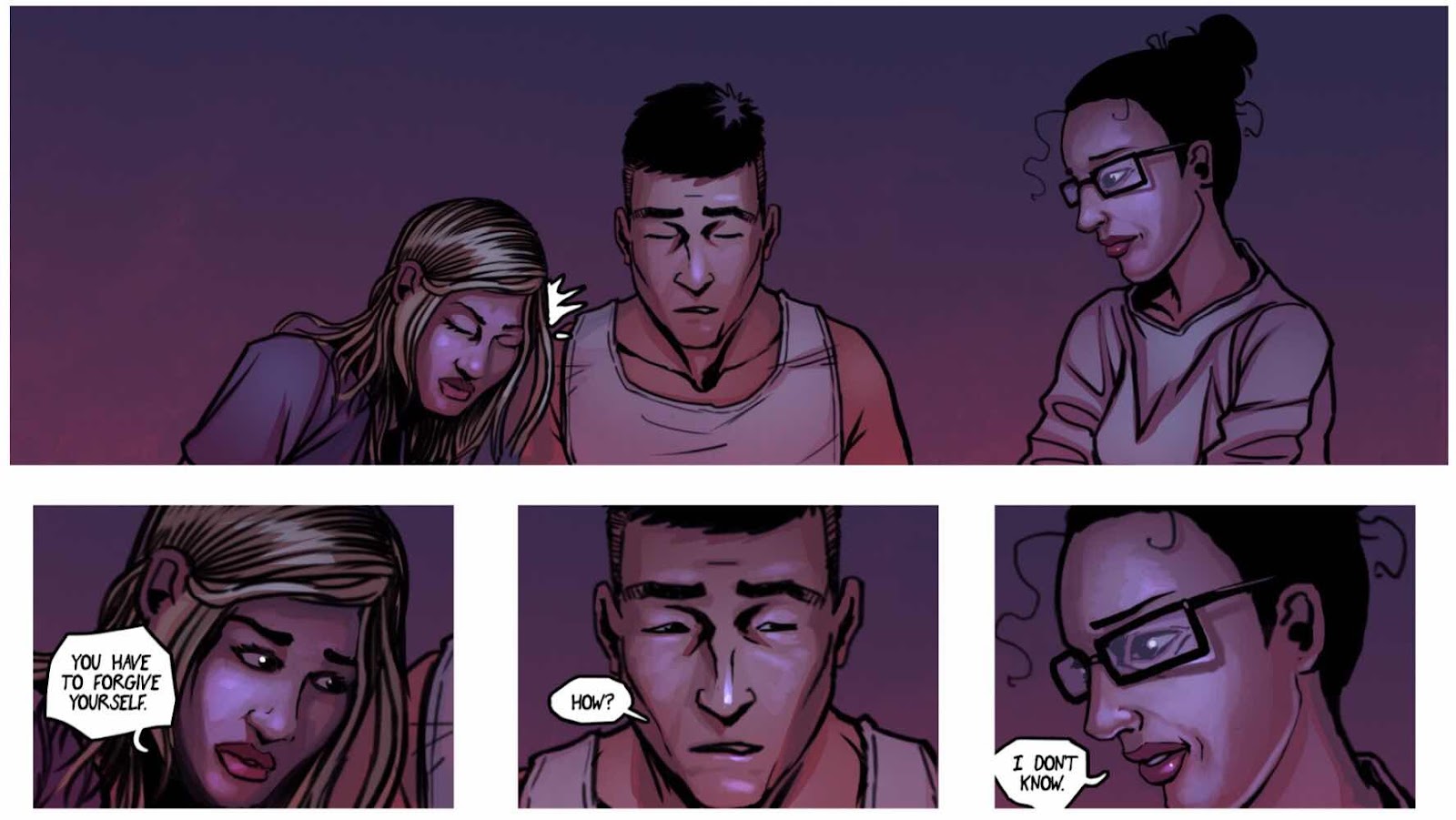