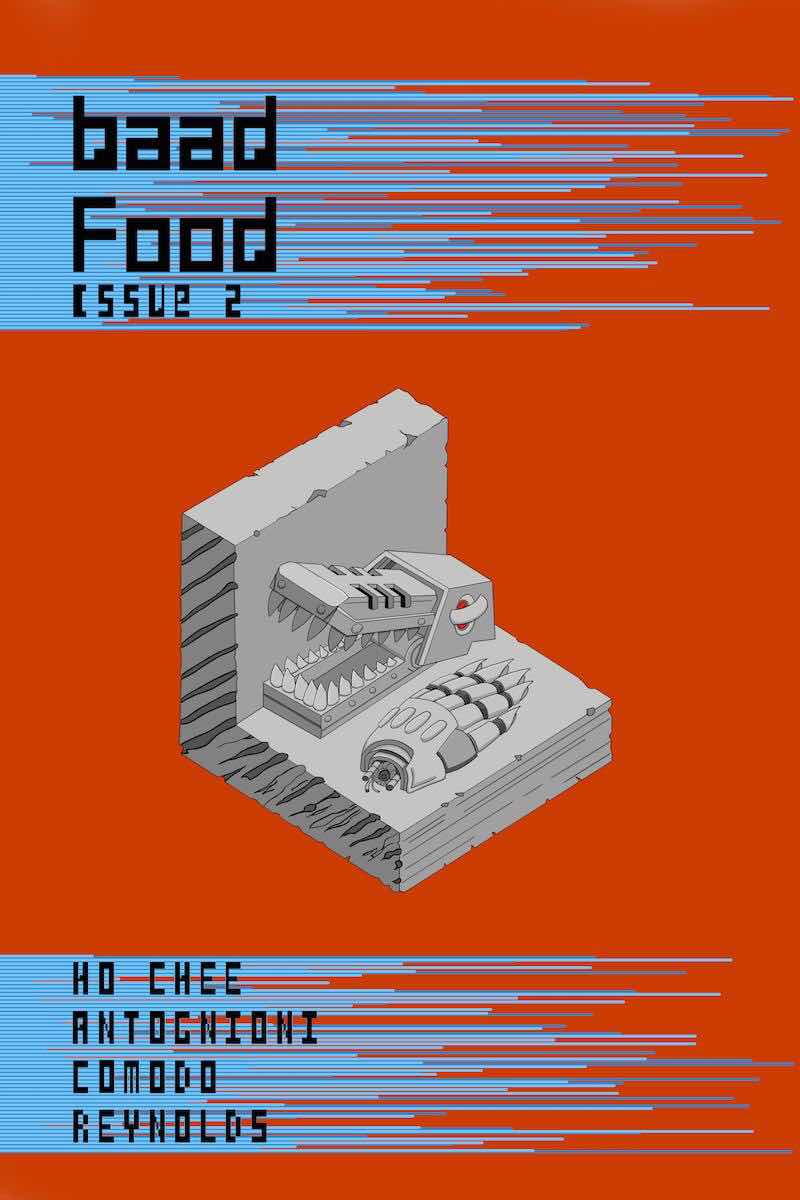 Pencils an Inks by Pietro Antognioni.

The Story - ‘BaadFood is an off-kilter sci-fi comic series which follows two music obsessed standard-Homo Sapien twenty-somethings stuck in a government run "back-to-work" scheme.  They are trying to find their way against the backdrop of a planet where machine intelligences, altered-Homo Sapiens, and an ageing population have taken all the best jobs. A chance event causes them, despite their protestations, to become the poster boys for a group of Neu-Human extremists that want to forcibly genetically engineer all Homo Sapiens and to destroy the emancipated sentient machines (WarSuits) that they share the planet with.’ 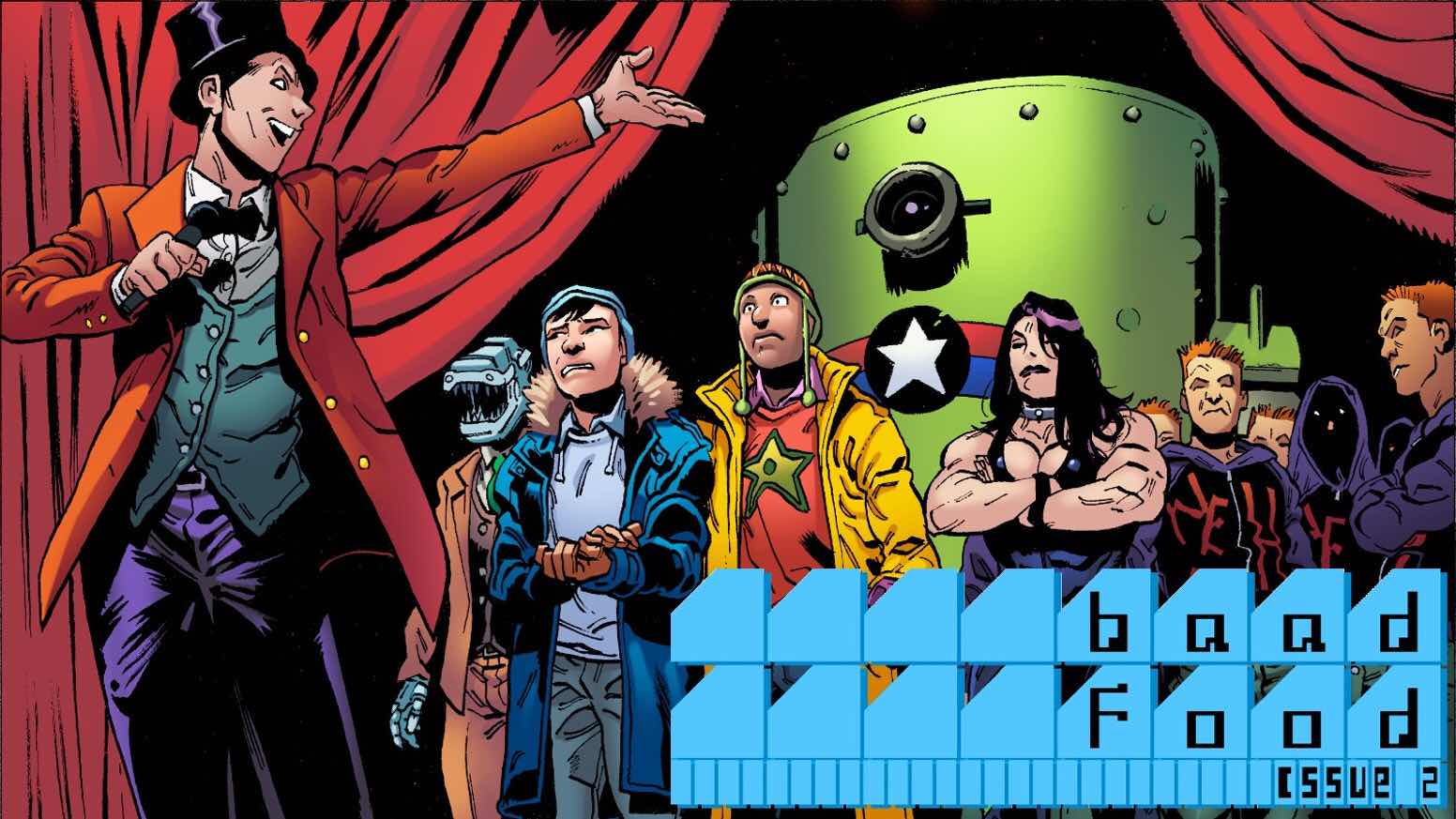 The Review - This book came along at just the right time. I’ve just hit the final days of my Honest Review Month and beginning to feel more than a little beaten down by the weight of derivative, unoriginal, prosaic and just plain dull comics I’ve been sent. As part of the exercise in giving honest and constructive reviews I’d almost hit the end of my tether. Then I got Baad Food issue 2 as a Kickstarter reward, I read it on an early morning train and there was finally light at the end of the tunnel.

I’m kicking myself that I hadn’t got on this series earlier but thankfully I’d pledged at a level that got me issue 1 and 2. I tore through them both on the half hour journey.

Issue 2 leads on from the original concepts from the previous issue. The characters are elaborated upon and new mysterious ones are duly added. The youths that we got to know in issue one are back and pretty much as annoying with their ‘Street Talk’ as they were earlier. This style of speaking is expertly transposed onto the comics page. It is so accurate that it gave me flashbacks to being forced to listen to South London bellends spouting non-stop repetitive bullshit from the back row of the upper deck of the Number 12 Bus!

Here are a couple for you to try out;

‘Oh. My. Days. Your mate just helped smash up that R-R-R-Ruster, Fam!’

‘I’m not going nowhere till I get my free, made by human hands, creps Fam!’

It’s a credit to the scripting that whilst much of what is said is in slang the book remains eminently readable someone old like me. I never felt like a fifty year old fish out of water.

This is an adventure that doesn’t begin with a bank robbery or a noble quest for a princess. This one commences because someone wants a pair of new trainers! What could be more of a satire on modern youth culture than just that! But it’s not just a trip to Oxford Circus or The Bullring that these idiots head out on but something rather more dangerous. They get thrown into something akin to a mix between a Deadly Circus game show, The A.B.C. Warriors and J.D. Sports! In fact pretty much every page throws more new ideas at the reader. The revelations of the dangers of the inner city robo-nightmare are thrown at these chuckleheads and they manage to survive and also remain on the lookout for new shoes! The new technology is told and shown once again with an edge of danger and realism. 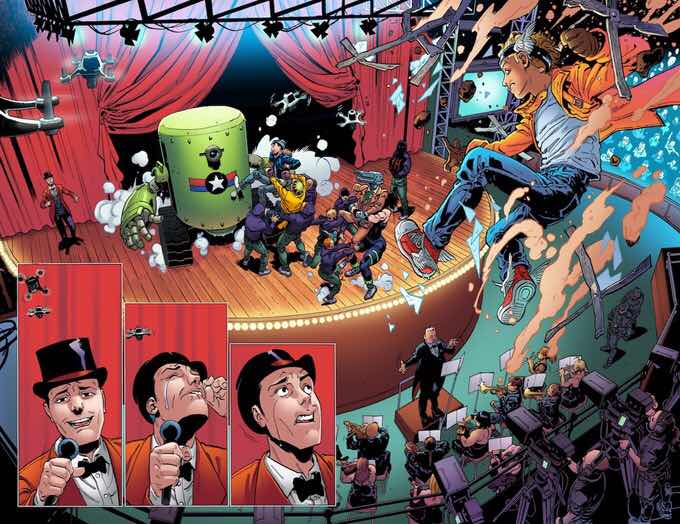 As well as humour and sharp social satire there’s also a bucket load of blood with heads being bitten off and someone’s morning business being interrupted. Finally something that is worth my time from the UK Small Press scene. It really is a ride!

I can see a direct line between writers like Warren Ellis and Grant Morrison with what the creators are trying out here. It’s a pretty polished affair but still has that experimental headspace on show. It’s a change of artists from issue one but it’s just as good and takes some real chances with layouts that pay off. The characters look like they’ve flown out of a nineties Tank Girl or Johnny Nemo strip (and I cant think of a bigger compliment than that!) There’s an urban landscape of madness that could also easily fit into a Block War story in 2000AD for example. Technicolour Cyber Gore in a chaotic setting. The art is worthy of anything that the prog is currently putting out.

If I had one small quibble it would be that the cover is a little on the quiet side compared against the mental violence of the interiors. (I had the regular cover and sadly haven’t seen the variant by Rugman. Oh hang on....here it is!) 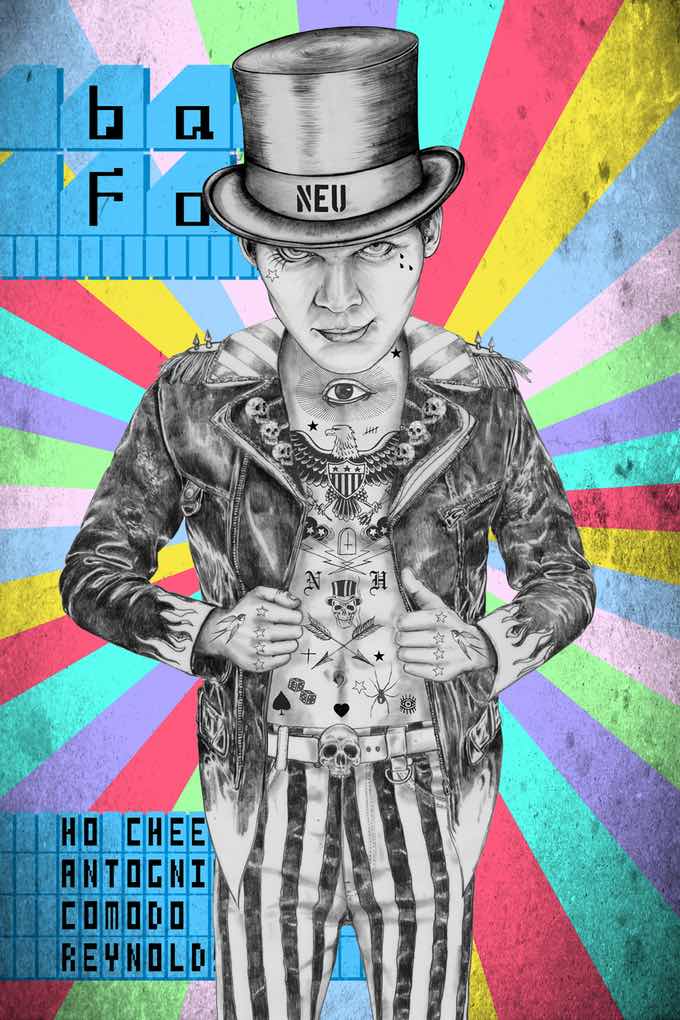 You can find out more about this series by heading over to http://bedtimecomics.com (currently under construction) or even better by following the Twitter account @baadfoodcomic