In Review - ‘Experience the Magic of the Legend issue 4: Excavated Esoteria’ by Arthur Goodman. 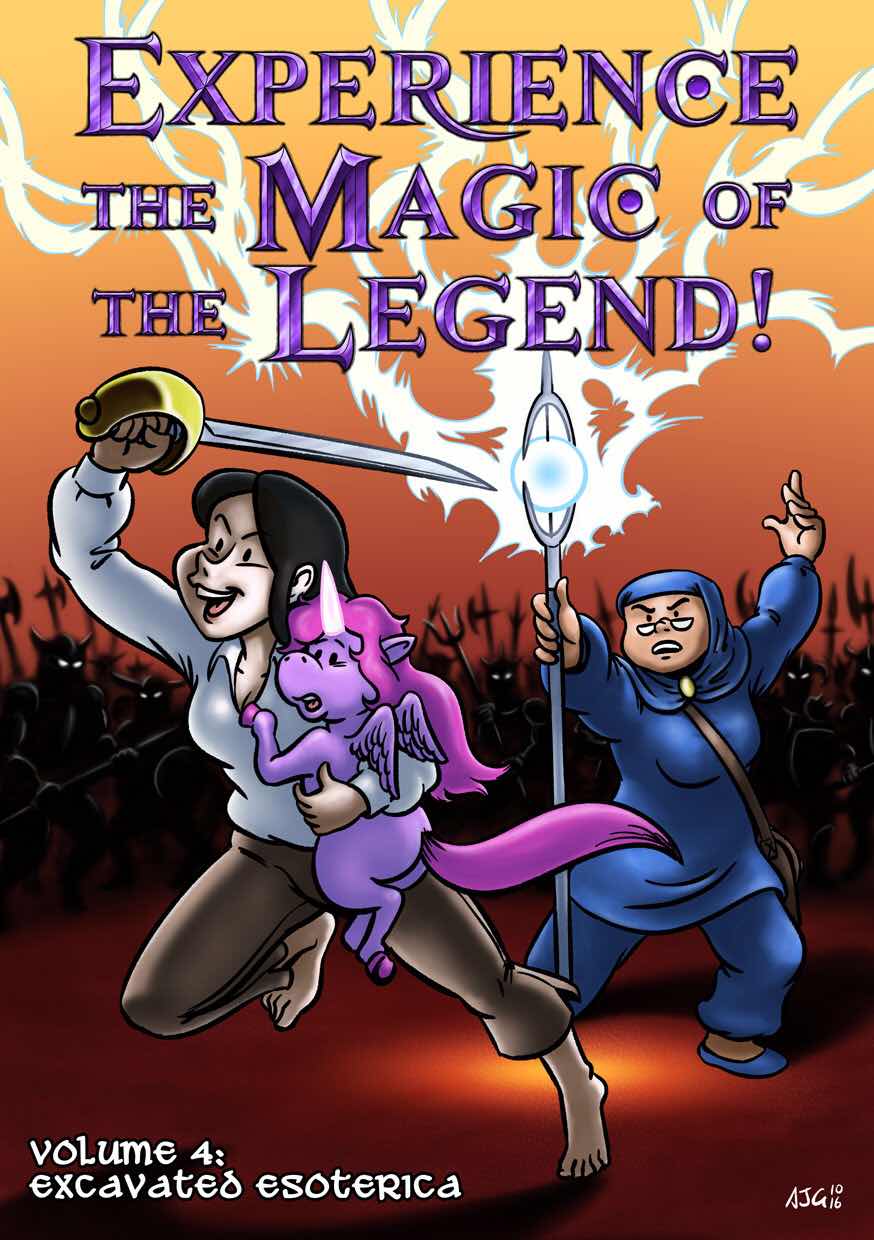 ‘Experience the Magic of the Legend: Excavated Esoterica’ - Issue 4.

Written and drawn by Arthur Goodman.

An anthology of seven stories that originally appeared online at www.favouritecrayon.co.uk

The Story - The scenarios of a fantasy based roleplaying game are played out for real by two characters who travel through mystical lands experiencing adventures and hi-jinks. The pair of real life people living in this simulated computer game bicker and argue and roam a world that is not their own.

The Review - This is my second attempt at a review. I was going to leave this one as it really isn’t my cup of tea. But after some badgering by the creator (he sent me messages on the blog, Twitter and then direct messaged me) I decided that I would put aside my prejudices to this Dungeons and Dragons tabletop gaming style story and settle in for an investigation of it’s worth in my eyes. It is after all what I set out to do at the start of this ‘Honest Review Month’.

It’s just my opinion so don’t come after me!

First off is the title of the series and this volume. It seems overly long and very forgettable. There may be some hidden in-joke there but I’m not getting it. I’ve actually just typed the title twice and already couldn’t tell you what it is without looking it up again. (Full disclosure here that I haven’t read issues 1 - 3.)

The cover itself does what all covers should try to do in that it gives you a sense of the tone and story of what are inside. The colouring is a little sharp but does catch your eye.

As I read it became apparent to me that it’s not the genre that I’m bothered by but the cutesy attempt at humour and the way this is delivered. The book relies on the characters getting into ridiculous situations and the humour that comes from these moments and their attitudes to them. It just isn’t funny. I’m sorry but I actually found it a chore to read and groaned at the laboured jokes, when I could find them, more than once over it’s twenty-four pages and seven separate stories.

Before venturing on the first attempt at a review I looked into who Arthur Goodman is and fully expected him to be a teenager or male in his early twenties. However judging by the biography on his website he is a fully grown man at least in his mid to late thirties. I’m not sure why this bothered me so much. Maybe it was the tone of the piece? It seems in keeping with some of the infantile webcomics you see on Tapastic and the like. Maybe it was the strangely out of place boobs joke that seems wholly inappropriate for this comic? Listen, I’m no prude but there’s a time and a place for a joke like that and I’d suggest it’s not in a comic like this. But mostly it’s because this doesn’t seem honed or crafted enough as an actual for sale comic. Arthur also states that he’s been making comics and tabling at conventions since the early 2000s and now knowing that fact I would honestly always look for more craft by now.

The writing is a little dull and has zero measure of jeopardy that you might presuppose from a comic full of death, battles and monsters. It needs something more, something with teeth, something wholly individual, something to grab the attention. This seems to me to be very by the numbers. Arthur has been creating comics for decades and needs in my opinion to find out how to push moments and stories. Once that exploration has been started his work would possibly develop and be more interesting as the art is serviceable in this comics storytelling medium.

Of course this is a subjective review. As are all reviews. I’ve tried to maintain as much objectivity as possible. I am not being purposely cruel, only direct and honest, when I say that there’s no denying that this is just plain boring. It’s derivative of a common and overused style and has nothing of a flair or a depth to its art or story beyond hackneyed cliches.

Make it more. Go to places and discover something more. Push your creative limits and never be complacent. This is just plain bland. Having a title of a story as ‘The Pursuit of Princess Prettyponycorn’ is just plain babytalk. The type font on that title line could also do with a serious tweak.

Now what was that title again?

You can of course make your own mind up and do so by going to http://www.favouritecrayon.co.uk/ or following the creator on Twitter @FavouriteCrayon