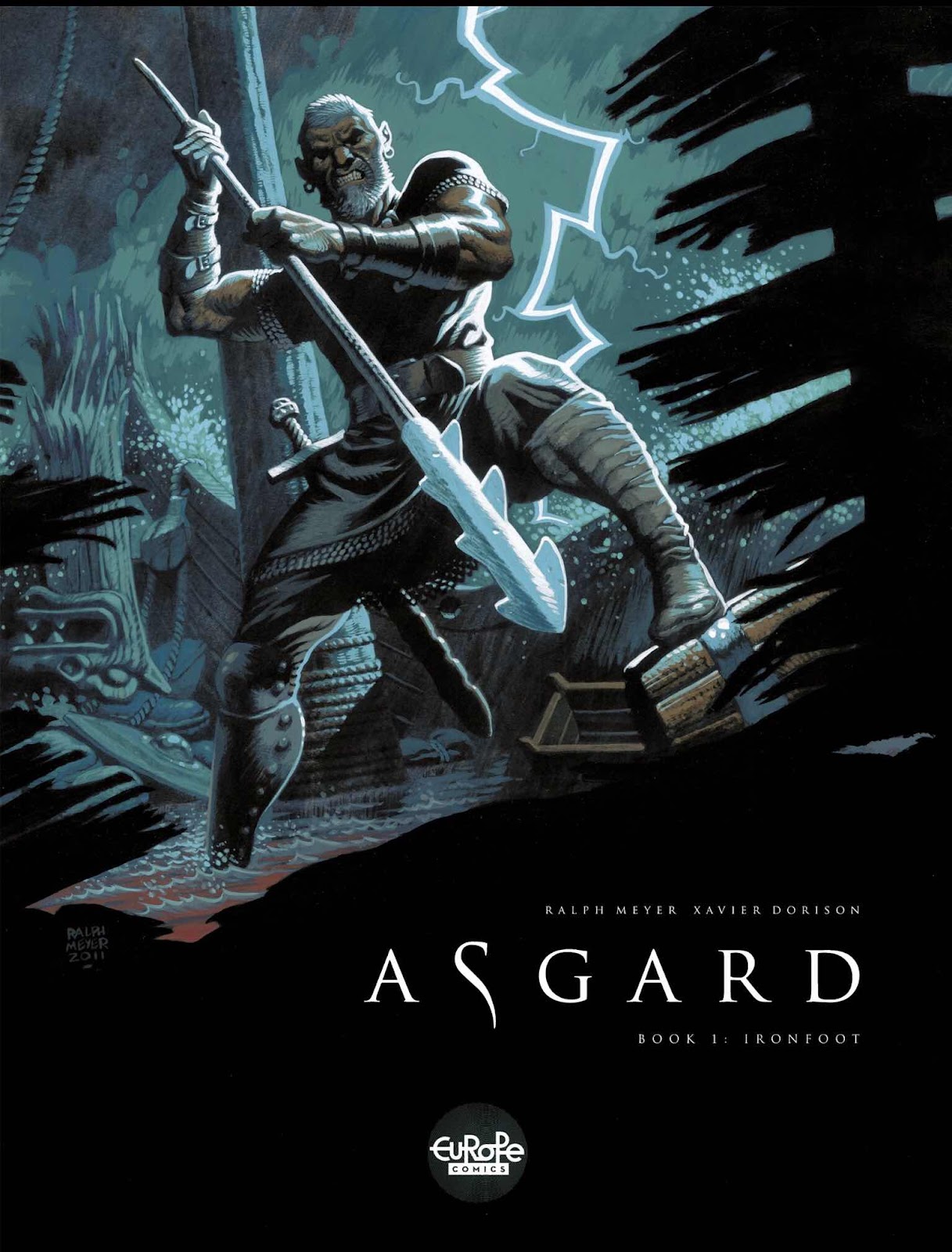 The Story - ‘A monstrous sea serpent is terrorizing the Fjördland, destroying one fishing boat after another, eating all on board, and keeping the Vikings from going on their pillaging expeditions. All hope seems lost until a stranger with a dark past and a score to settle with the gods shows up and offers to hunt down and slay the Krökken for a thousand silver talents. Soon a ragtag group of would-be monster hunters boards a drak and, against a divine, ominous Nordic background of lakes and mist and mountains, sets sail on a perilous mission not all will survive.’ 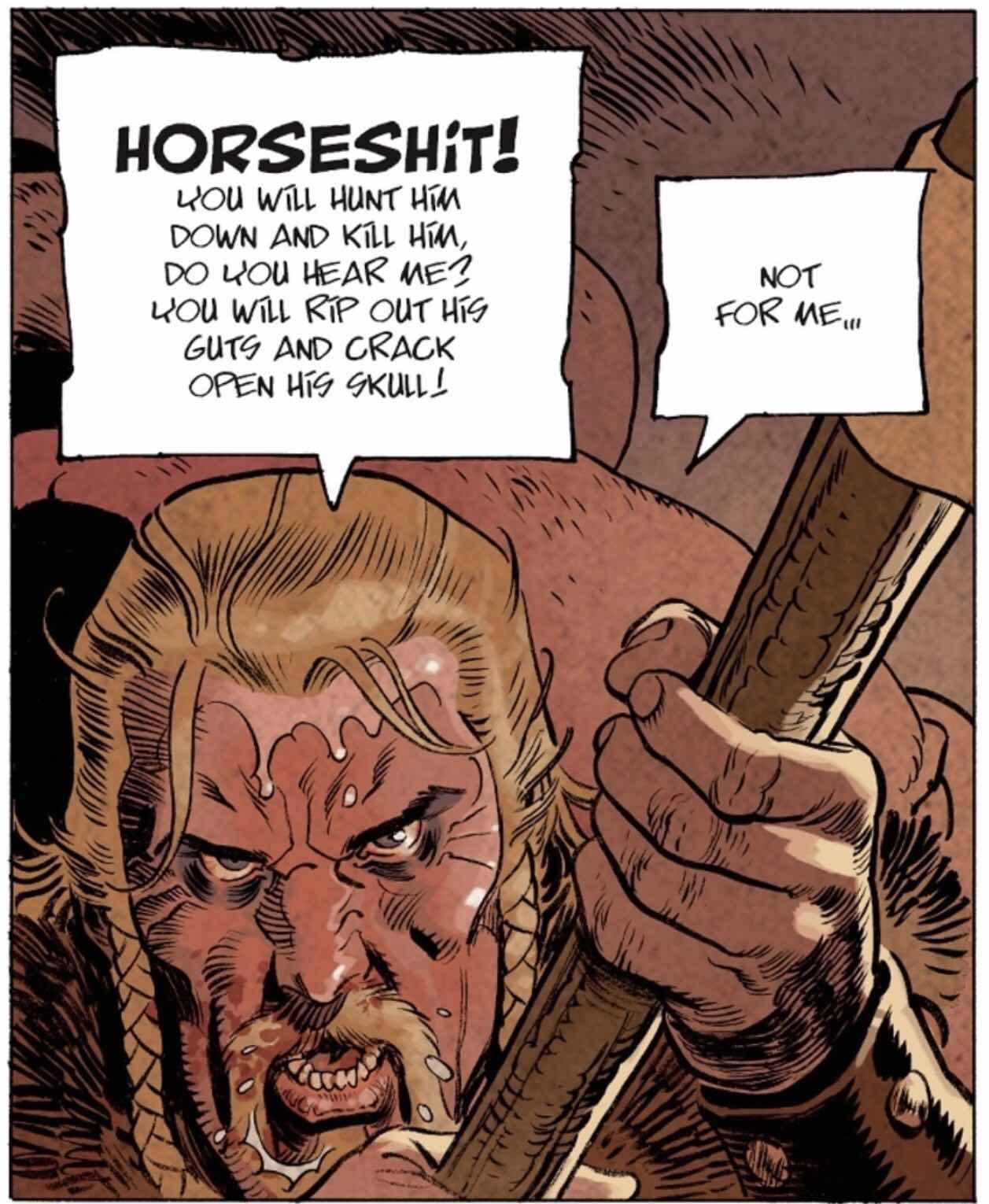 The Review - Lets start with the obvious.

1. Why isn’t everyone talking about this book?

2. Have you seen what gets nominated for comics awards at the moment? This should be at the top of the list.

3. Ralph Meyer’s art is all kinds of great! 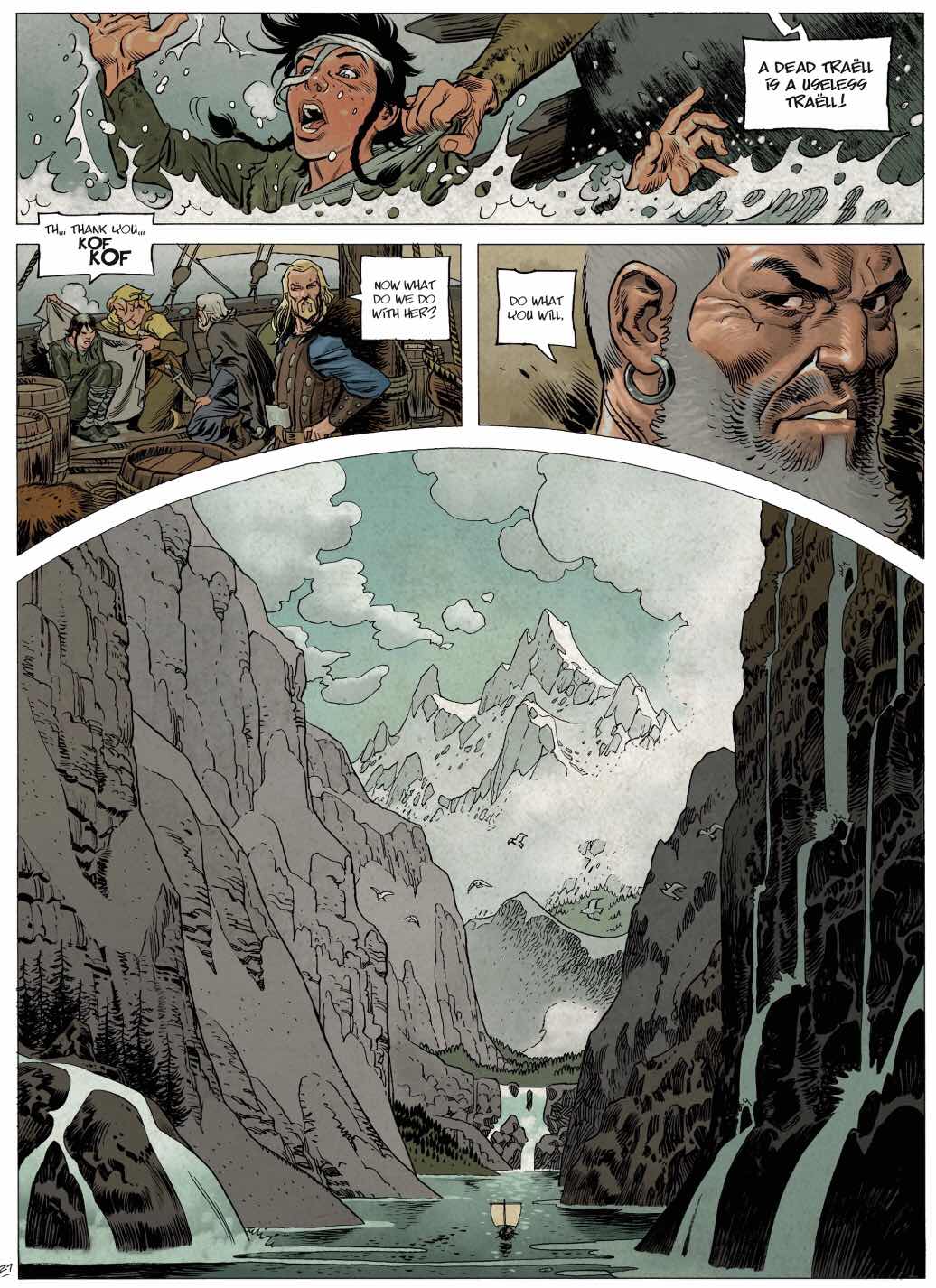 The assertion that Europe Comics are putting out some of the best examples of the Ninth Art ever seen became a never ending echo in my reviews and is totally true every time I hear it. This book is outstanding. It would be outstanding in any era but stood up next to the quality of many contemporary American comics today it dwarfs them artistically at every page turn or panel swipe.

This is a book with a story that looks straightforward at first glance. A group of warriors band together for different reasons to catch a sea monster that is ravaging the boats and villages along the coast. Their motivations become more clear as the quest continues and you get an insight into the hearts and minds and souls of them all. Some will not survive and you are left at the end of Book One wondering where the quest will lead next.

The hero of the title Asgard is a man of deep emotions and a sad darkness. He is a solitary and single-minded warrior who at forty years is the old man in the group but is still hard as nails. When the sun sets and they sit around the fire or the sea is quiet they philosophise about the world, the monster, each other and the coming storm of Ragnarock. Some of the group see the monster secretly as a saviour and others a curse. As these conversations progress Asgard explodes with his anger at his world and his gods.

The quest becomes a competition of wills and cunning between the sailors and the serpent they are attempting to hunt. Trap and counter trap are revealed and survival seems suddenly on everyone’s minds.

I suppose my one problem with the book is that it leaves you hanging as to what will happen next and I immediately loaded up volume two to read onwards. 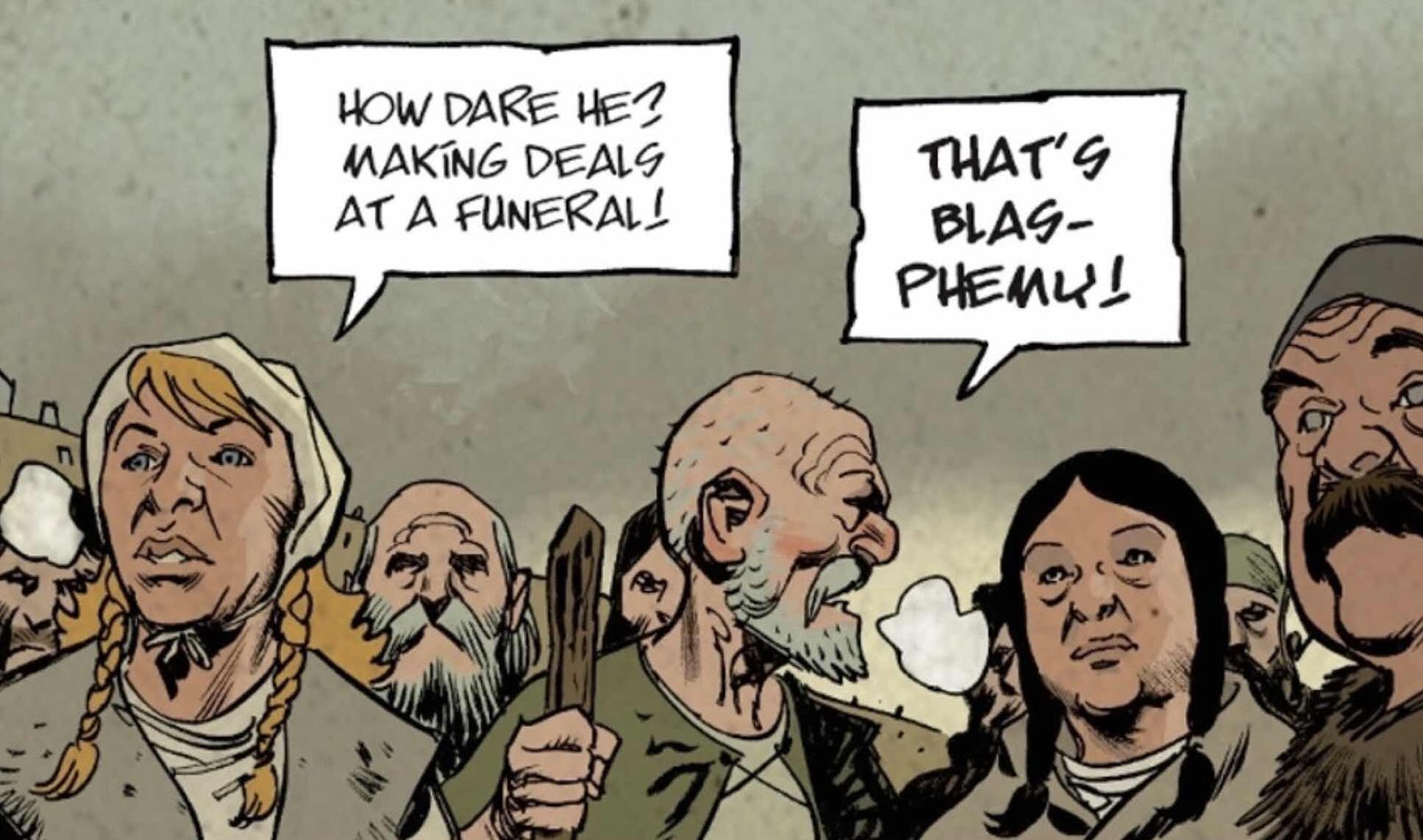 It’s rare that you will see art that is so grand in gesture and in detail. From the spectacular page layouts to the faces of the villagers there isn’t a moment wasted or under-drawn. Meyer is an artist I had previously read on the series The Undertaker and he has that element of the line used by Jean Giraud on his Blueberry work, yes he is that good. Every single village person or warrior or background character of any kind could easily be a series all of their own. I am an immediate fan.

This book goes recommended without reservation. Just be prepared to buy volume 2 straightaway. 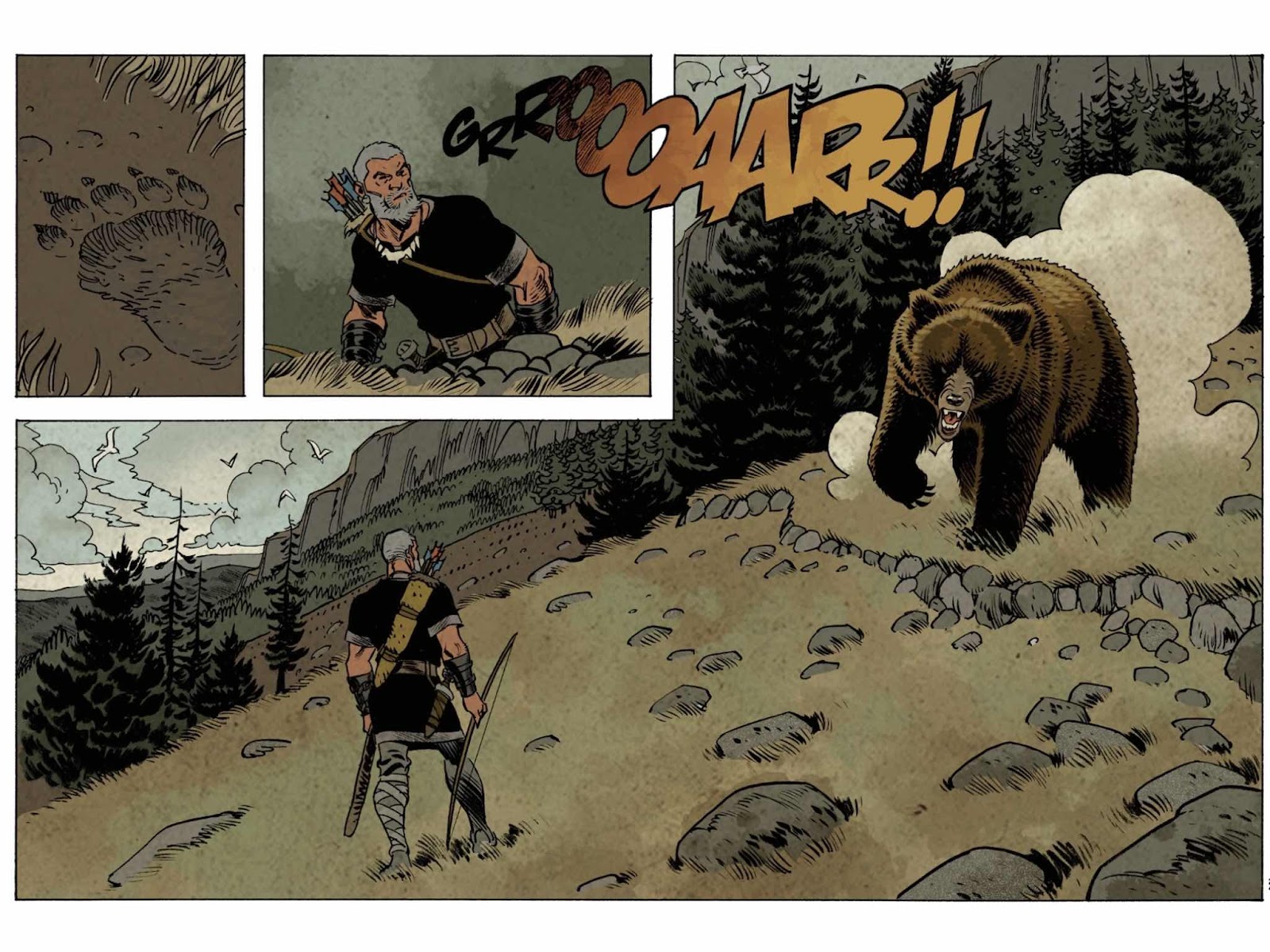 Head over to http://www.europecomics.com/album/1-ironfoot/ for more details on this series and have a look at the other books on offer.

You can follow Europe Comics on Twitter @EuropeComics and many thanks again to Irina for hooking me up with such amazing books!

Here are some details of the creators from the Europe Comics site:

Xavier Dorison was born in 1972. After three years of business school, during which he launched a college comic book festival, he started writing Troisième testament (Glénat), a series illustrated by Alex Alice. Following that, he worked with Mathieu Lauffray on the series Prophet (Humanoïdes Associés), and then with Christophe Bec on Sanctuaire (Humanoïdes Associés). In a very short time, Xavier Dorison carved out his status in the world of Franco-Belgian comics, which was confirmed by W.E.S.T. (Dargaud; Spooks, Cinebook), co-written with Fabien Nury for one of the biggest names in realism, artist Christian Rossi. In 2007, he teamed up once more with Mathieu Lauffray for Long John Silver (Dargaud, Cinebook in English), which also met with huge success. In 2008, publisher Dargaud called on Dorison to write the script of the first volume of XIII Mystery (published in English by Cinebook), a spin-off of the famous series XIII. The artwork was done by Ralph Meyer, and this would be the beginning of another prolific collaboration, including the Viking epic Asgard (Dargaud, Europe Comics in English). And in 2014, with Thomas Allart, Dorison produced H.S.E. (Dargaud; Europe Comics in English), a tale of suspense about the downward spiral of an ultraliberal society. As an author with a high output, Dorison tends to work on several comic book series at the same time. Switching with ease between the aforementioned series, and his latest and greatest success Undertaker (Dargaud 2015, Europe Comics 2016), he's proved his ability to work with genres varying from adventure to westerns to historical drama, without ever losing the energy of the plot line and the structural solidity that characterize his work. It thus comes as no great surprise to know that he was entrusted with a recent volume of one of the all-time biggest adventure series of Franco-Belgian comics, the legendary Thorgal (Le Lombard, Europe Comics/Cinebook in English). He has also made a splash with his latest work, the historical fantasy series Aristophania (Dargaud, Europe Comics), created alongside Joël Parnotte.

Ralph Meyer was born in Paris in 1971, Ralph Meyer was very young when he started to cultivate his taste for drawing and stories. When the time came to think about what to do with his life, it seemed natural to choose comic books. As an insatiable reader, he enjoyed the slapstick humor of Gaston and the adventures of Blake and Mortimer just as much as the existential problems of tight-clad superheroes populating the Strange comics monthly. His discovery of the work of Giraud (aka Moebius) during his adolescence would later have a considerable influence on his own work. At 20, he left Paris and moved to Belgium to take illustration classes at the Saint-Luc Institute in Liège. When he finished his three-year course, he began approaching publishers with various different projects, but to no avail. In 1996, he decided to present his work to writer Philippe Tome, who offered Meyer a particularly sinister plot to work with. A year later, they released the first volume of the Berceuse Assassine trilogy (1997 Dargaud, 2016 Europe Comics, Lethal Lullaby). In the meantime, he founded with a few other authors the "Parfois j'ai dur” workshop. This was where he produced Des Lendemains sans nuages (Le Lombard; Clear Blue Tomorrows, Cinebook) which he co-illustrated with Bruno Gazzotti, with Fabien Vehlmann writing the script. Next up, still with Vehlmann, he started the sci-fi series IAN (Dargaud; Europe Comics/Cinebook in English) which narrates the adventures of a being of artificial intelligence, complete with human skin and nerves. In 2008, he and Xavier Dorison released the first volume of the XIII Mystery collection (Dargaud, Cinebook in English), for which he was awarded the Brussels 'St. Michel' prize for illustration. The year 2010 saw quite the graphic turnaround for Meyer, with Page Noire, a one-shot scripted by Denis Lapière and Frank Giroud. In 2012, he and Xavier Dorison teamed up once again for the Nordic landscapes of the two-part Asgard (Dargaud, Europe Comics), soon followed by a third collaboration on the on-going series Undertaker (Dargaud, Europe Comics), which continues to enjoy unprecedented success. Ralph Meyer lives in Liège with his family and his cat Microbe. 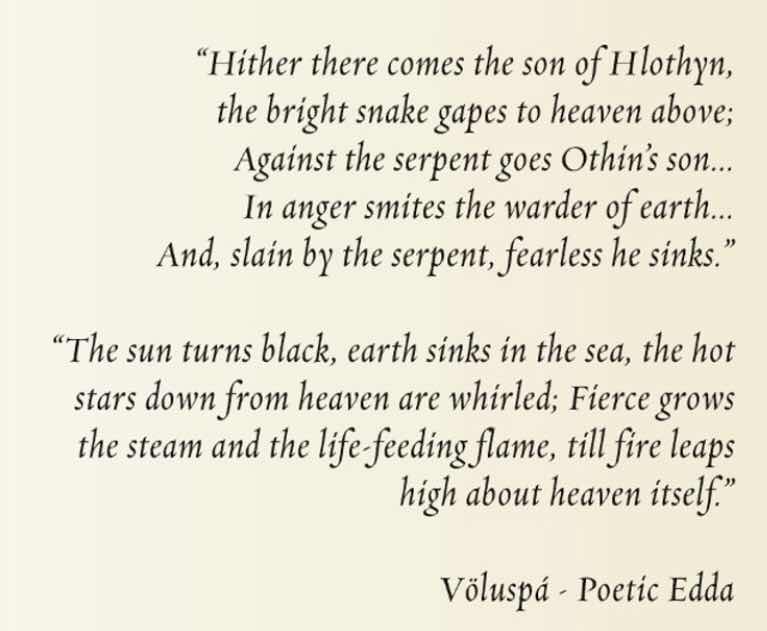