In Preview - ‘Dragman’ by Steven Appleby. 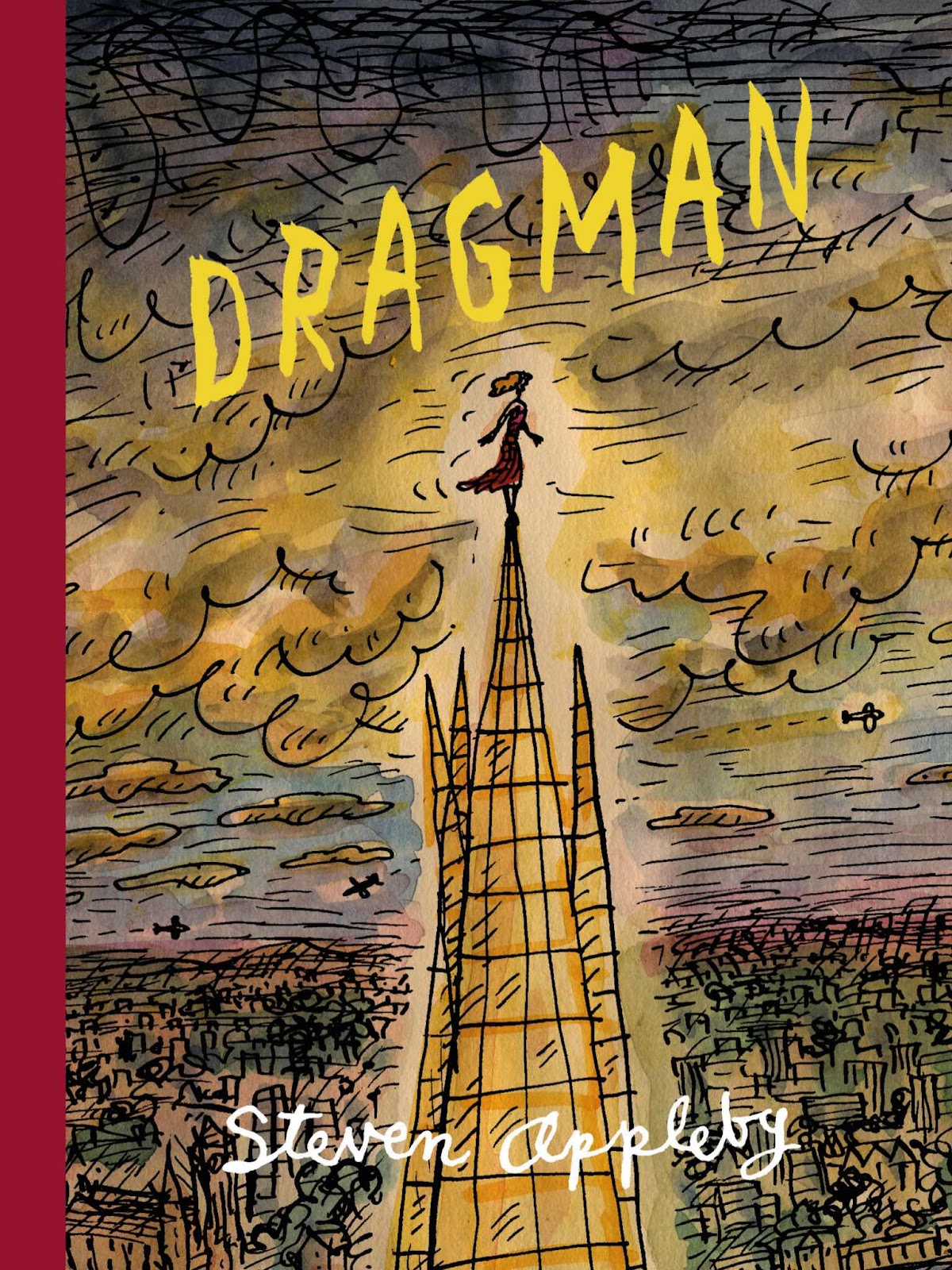 The Story - ‘Dragman tells the story of August Crimp, a man who has superpowers when he puts on women’s clothes. August loves wearing a dress but is deeply ashamed of his compulsion and terrified of rejection should it ever come out. So he tells no one. Not even his wife. But then one day a little girl falls from the rooftop cafe at the Art Museum and August has no choice but to fly and save her – an event witnessed by hundreds of people.

And August Crimp’s life is never the same again.’ 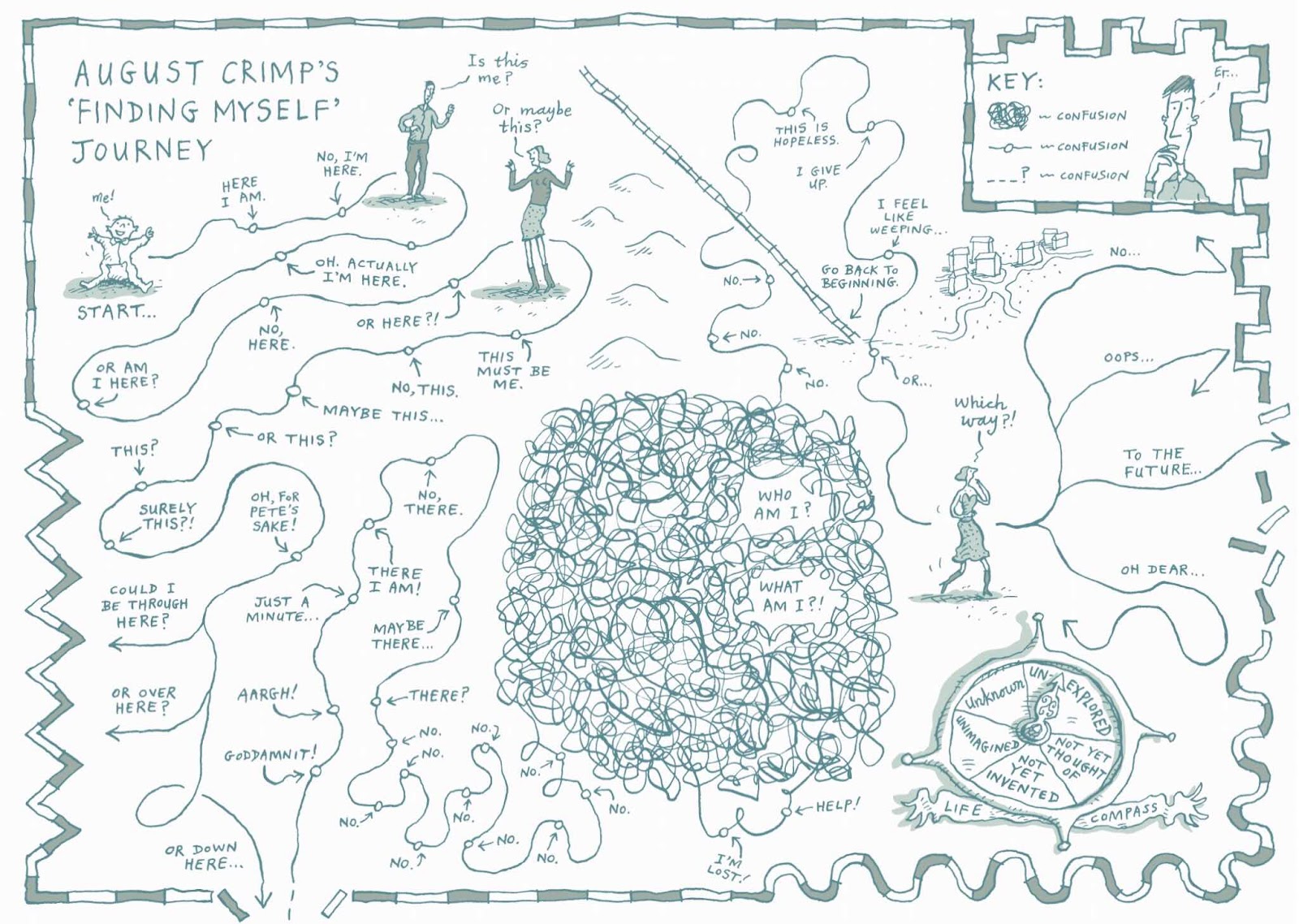 The Review - I have long been a fan of Steven’s art and was over the moon to get sent a preview copy of this impressively packaged graphic novel. Even at it’s 336 pages of story I read it gripped and within one sitting. For this is a story with many themes and layers. I then reread it in physical form - you can’t beat an actual page turn! It can be read as a surreal superhero story, as a touching romance, as a didactic morality tale, as a thriller and also as an honest speculative biography with autobiographical touchstones.

As a fifty-something straight male I hopefully approached this book with my eyes open and a preparedness to learn. I also took care, even in my own oafish fashion, to politely ask about Steven’s preferred pronoun. Steven is a trans person and whilst he makes it clear in the afterward that August Crimp is not him there are the obvious parallels. It’s fair to say that I learned much but was also amused, intrigued and glued to the absolutely gorgeous art. There is also a warmly nostalgic feel to the moments that reference old comic books without a hint of snark. 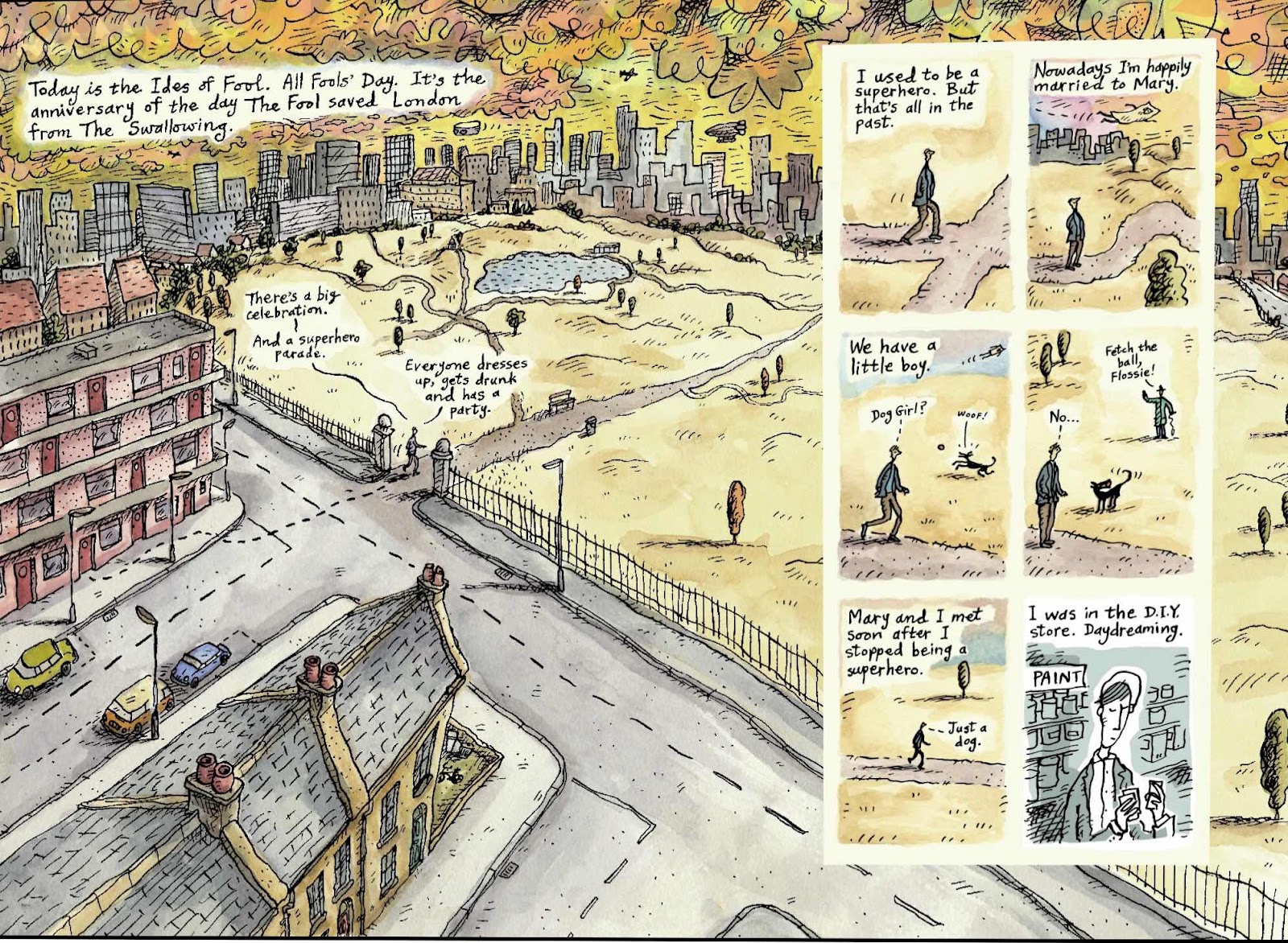 This book is at it’s heart, in my humble opinion, a book that shows the benefits and difficulties in reaching your own personal empowerment. It shows the characters in a number of ways fighting injustice and prejudice. A stand-out moment being when August declares that he is not in drag but is a trans person. A distinction taught sensitively through the use of character and narrative. There is no hitting us over the head with diatribes here. Steven builds the characters with genuine truth and affection and allows them to speak to the issues, all the while wrapping the story with some great moments and within a capes and cowls genre.

The creator of Dragman read superhero comics as a kid and you can see the parallels with his own life. For years Steven kept that ‘Secret Identity’ and has his own ‘Origin Story’. The moment where Crimp tries on a pair of women’s stockings and is thrown up to the ceiling is an absolutely brilliant moment that joins the autobiographical with the fantastical.

‘That was the first time I flew.’

Crimp uses covert and secretive methods to disguise the other side of his life. It’s just that in Dragman he has the power of flight!

But the nature of secrets is that often they are found out and people can get hurt. One of the most sensitively captured moments is when Crimp finally admits everything to his wife Mary Mary (named twice) and it’s not the dressing up and putting himself in danger that hurts her but rather the secrets that he kept. We’ve all felt that pain with a partner for one reason or another? Steven draws out these super-personal moments with absolute deftness. Another stand-out for me is when August meets his future wife whilst looking at paint samples and listening to The Fall on his headphones. Mary Mary tells him warmly that they may not be the best band to pick paint colours out with? Peter Parker might have more success with the ladies if he had a better taste in music! 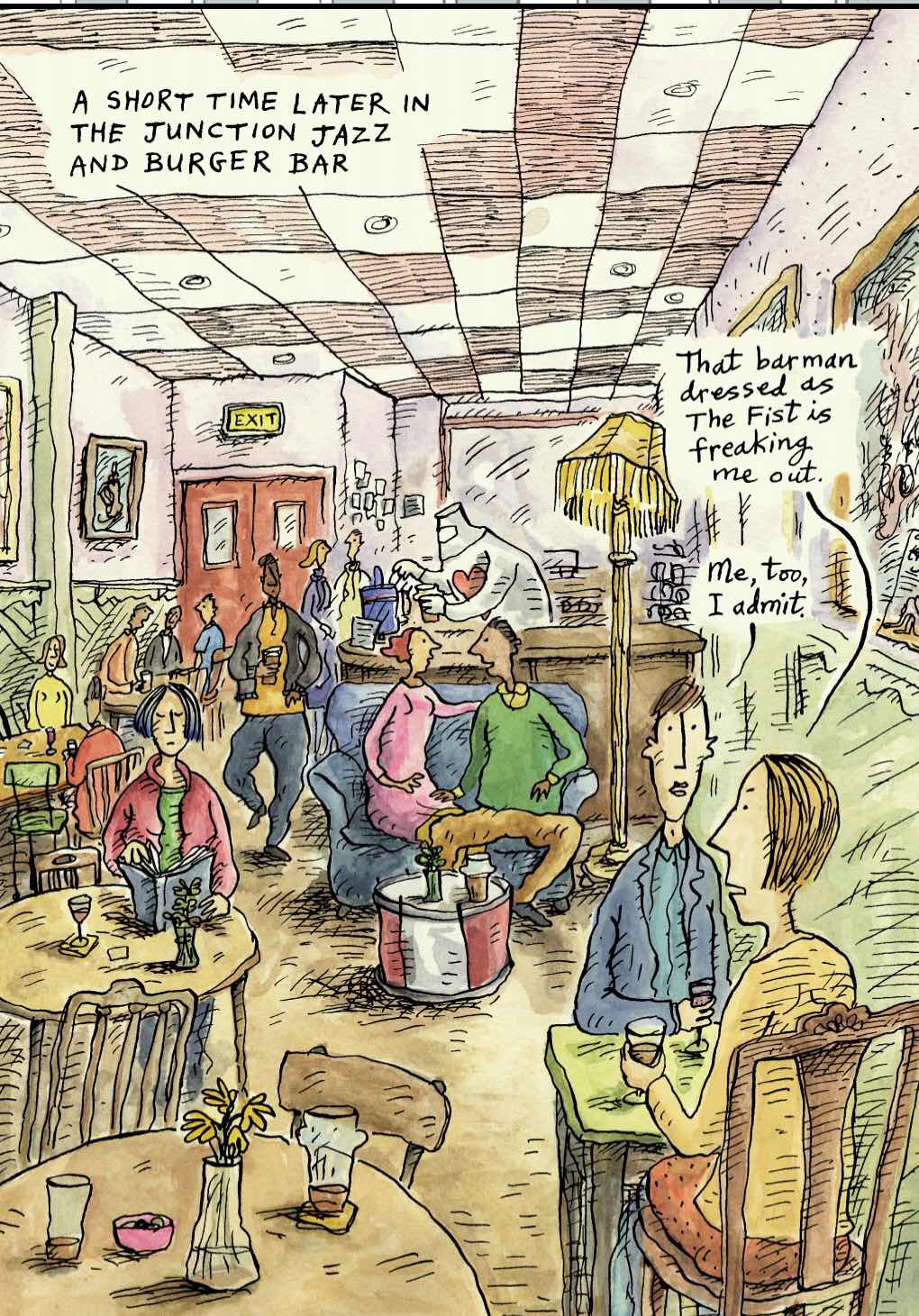 This is a book of discoveries and revelations. August Crimp learns as we watch and we see how these changes affect both him and those around him. The emotional beats are counterpointed by the absurdist and hilarious moments involving the superhero community. This graphic novel hits that sweet spot for me where we get widespread surrealism without the cliche of crossing over into fantasy or magical story points.

But Dragman is not the only superhero in this world. In fact they seem to be all over the place. We get characters like the over-friendly lethario ‘Hindsight’ or ‘Pipe’ who can use his powers to transport members to the private and hidden superhero club. We also get to see the rather too angry Marsupial Man;

A personal favourite for me is ‘Believer’ who is a ranting, old and alcoholic cape who is now jaded and used to have the power to ‘believe in things’. Dragman even has a sidekick called ‘Dog Girl’ who has ‘super smelling ability.’ Dog Girl is carried around in flight by Dragman from mission to mission.

The world has some pretty intriguing touches. For example you can sell your souls for cash in this parallel universe. But in doing so it changes you, makes you crueler. This creates both a metaphor for the savageness of the modern world but also creates a horror element to the narrative. These souls are then used by others. Throughout the graphic novel you get short prose sections at chapter breaks that can have a chilling element to them.

‘There’s nothing quite so sublime as the frisson he gets when the soul of a dirty girl slides into his system.’

Just from the above you can see that this graphic novel slips between the unusual and oddball skybound superhero antics, the grounded social realism, the horror of losing your soul to the more sensitively dealt with minutiae of human relationships and love. It is also guaranteed to put a smile on your face - and I cannot stress that too highly.

The art uses that much valued technique of a limited colour palette in flashback and then quickly switches up to beautifully realised full colour pages and splash pages. There is a staggering amount of work that has gone into each and every page. You will drink in every single page and spend time spotting all the little details. Nicola Sherring is a big part of the art in this book with her watercolour vibrancy an integral part of the present day sequences. 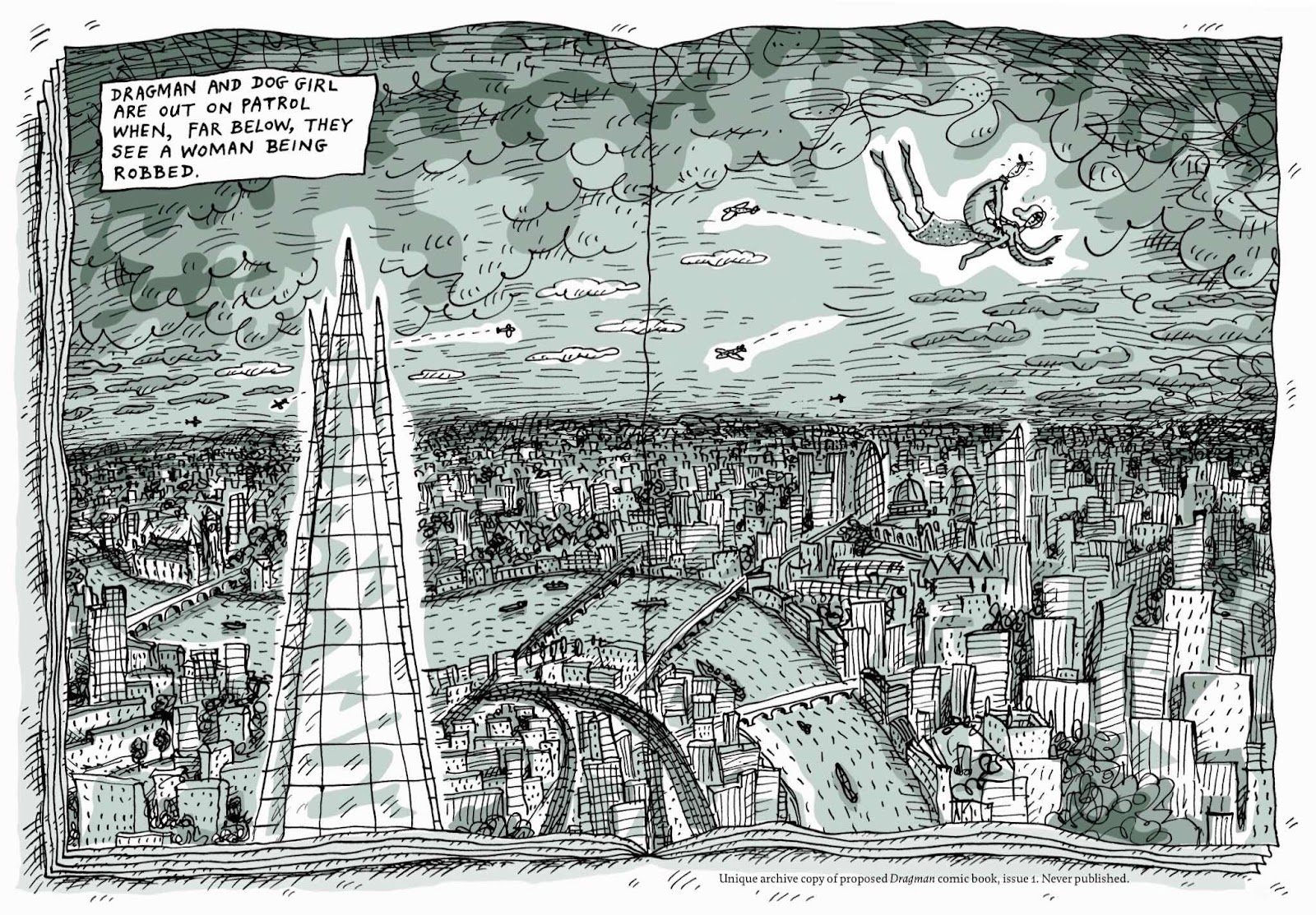 Enough of this gushing! This book is the best one I have read in a while. I read and reread it in a matter of two days and firmly believe that it will be winning all the awards soon. You heard it here first.

You can find out about more great books and art from Steven Appleby here http://stevenappleby.com/ and follow him on Twitter @StevenAppleby