In Review - ‘Andromeda’ or ‘The Long Way Home’ by Zé Burnay. 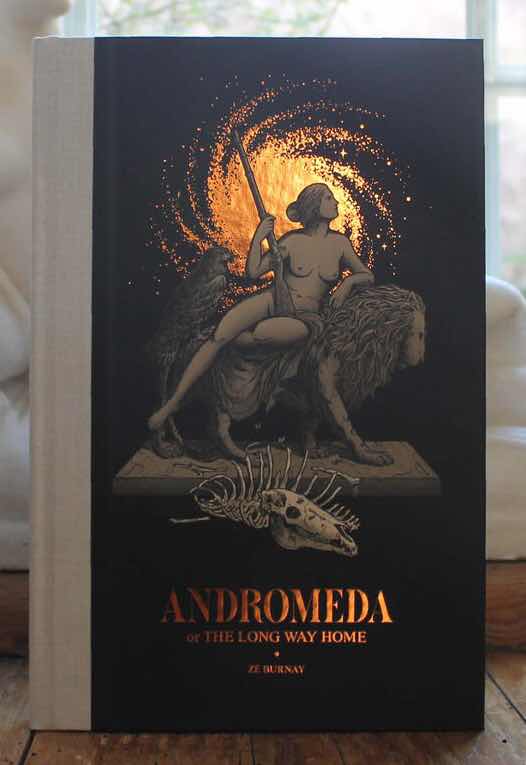 ‘Andromeda’ or ‘The Long Way Home’

understand, thrive and conquer the landscape that surrounds him.’ 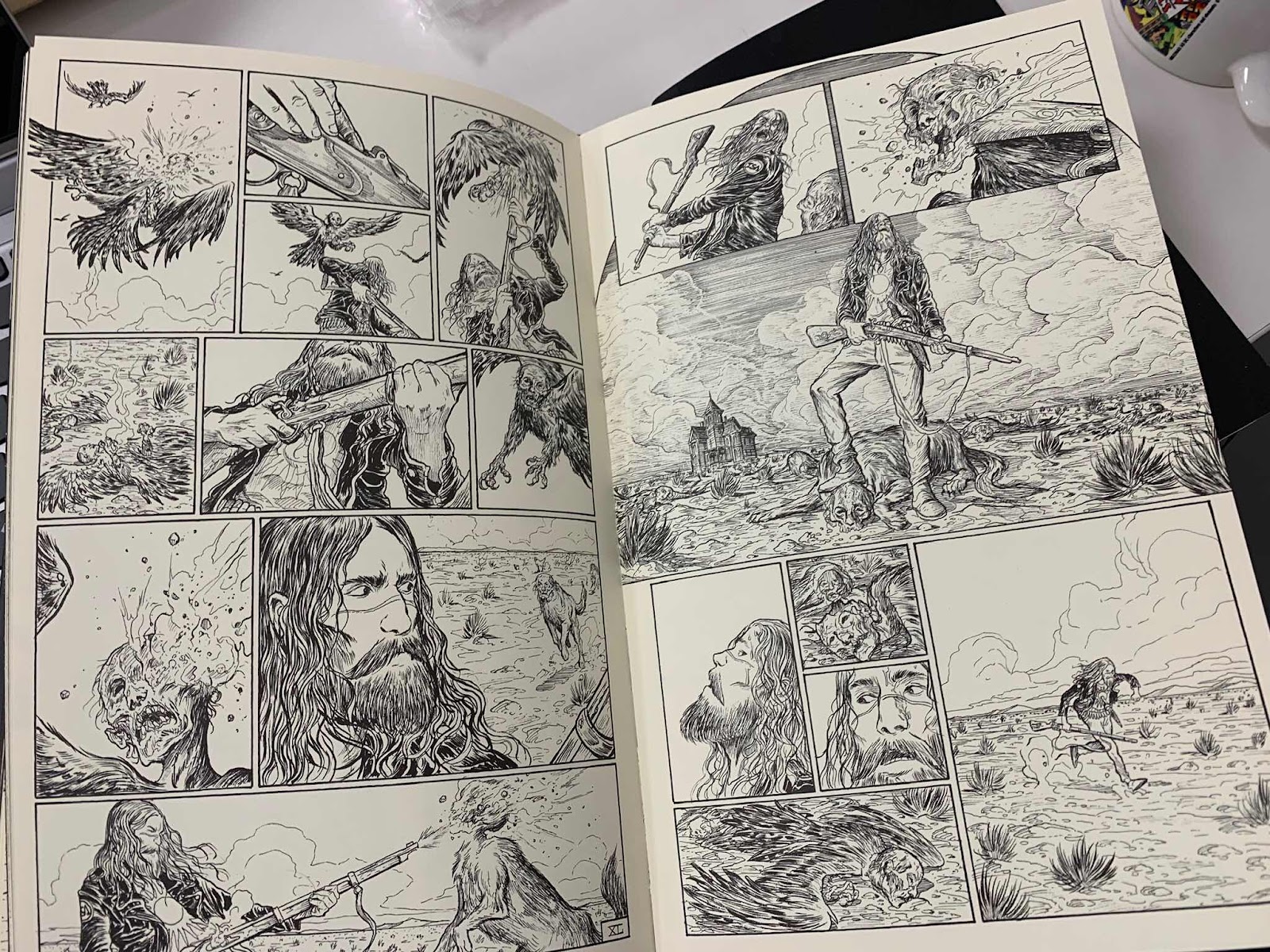 I was lucky enough to encounter the creator of this graphic novel when he popped over to the Nobrow table at the recent Thoughtbubble Festival. He wanted to get the second volume of Geis by Alexis Deacon as the format had inspired him to go with the binding, paper stock and hardback treatment of Andromeda.

I asked to see his book and opened it with Lucy my colleague on my shoulder.

This was an immediate must have. From a momentary scan of the super detailed and beautiful black and white interiors I knew that I had to have this book. There is a spectacular alchemy on show here. The pages feel at the same time like a mystical manuscript and also like something put out from Darguard or Humanoids by way of Avatar. It’s like Moebius, Juan Jose Ryp, Ralph Meyer and P. Craig Russell all fucked and this was their art baby! Whilst this has come from a self published project it has an ambitious assuredness and could easily have been released by any number of large worldwide comics publishers. 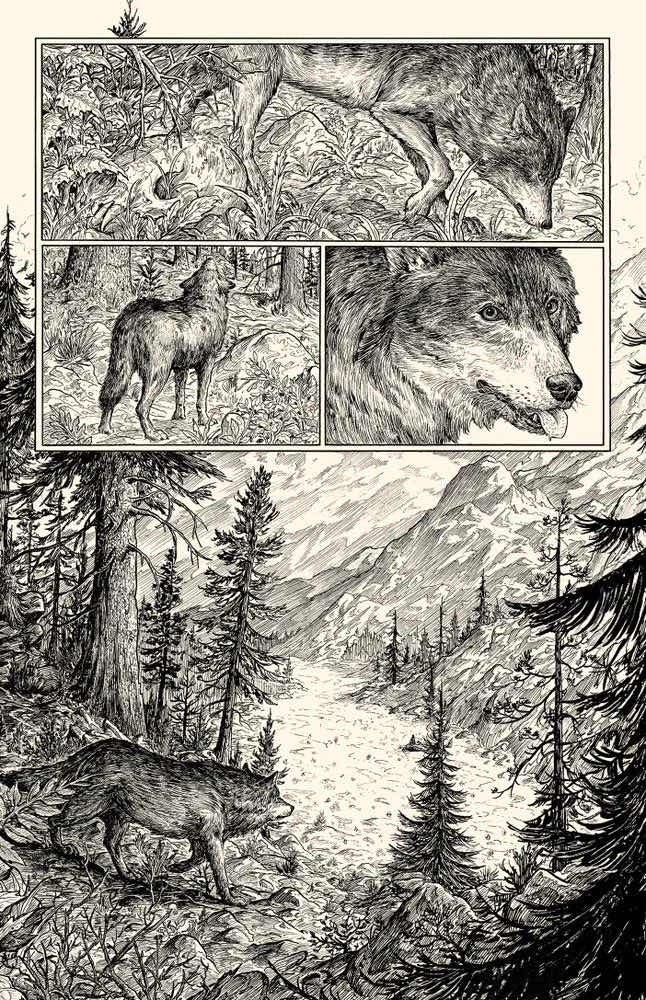 I have sat on this review for a week as I felt that I needed to mull over the comic a little longer. There are strands and themes that should not be tackled by rushing into a piece. The script feels like something Jodorofsky or Steve Gerber might attempt during a nightmarish hallucination. It gnaws at the edges of your emotions and makes you wonder where the next frightening vision will arrive. A Spaghetti western meets a Jerry Cornelius twisted reality by way of European art house sci-fi horror. There are well defined chapters that jump in time and surroundings - I might have liked to have seen more of the snowy wastes perhaps? After the heat soaking into the reader’s bones in the desert I’d have liked to have lived more in the cold - maybe another volume is coming soon?

Zé makes no secret that this world and the story we follow doesn’t have the logic of the real world behind it’s narrative. The reader’s problem solving tries to make sense of what is happened and who is good, bad etc. But you find it difficult to penetrate the world building and swirling plot. I find this a most refreshing approach. Too often are we spoon fed with the trite and the obvious. This is something different in approach that allows you to soak in it’s not unsubstantial mood and tone. Because the art is so detailed and the ideas keep flying you are allowed to soak in the pages without rushing to an everyday conclusion. 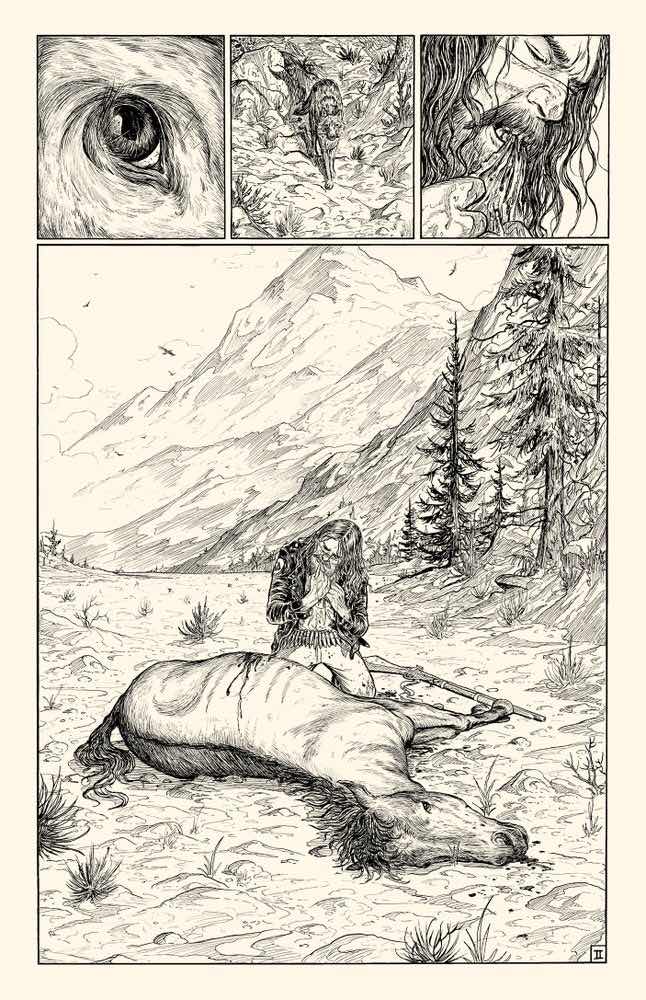 First on my mind is that Andromeda is a piece of outsider art in it’s indie financed creation but also in it’s leather jacket wearing hippy protagonist. He is the ultimate loner. This man is a hunter, a fighter and a survivalist in a world more dangerous than our own. He walks through the changing landscapes thin and starved but with an desperate eye out for danger. His moments of pause give way often in a sudden manner to the adrenalin rush of sinisterly tinged ferocious violence.

There are pseudo religious overtones on show throughout. The protagonist has that Christian messiah appearance. He even wears a loincloth in one dream sequence and has his side pierced with spears. This may be a stretch but he bears a Sun symbol on his chest that may actually present us with him as a ‘Son’? He arrives at a house standing alone in the desert and sits with eleven other people for a meal. I kept expecting Judas to turn up a little richer than before.... We also witness the iconography of worship throughout this volume with altars, biblical (yet zombiesque) demons and monsters and statues as votive images in often representational/alive story twists. The motifs of death, rebirth and life surround this story.

Treacherous aspects of the desperate human are paralleled in the actions of the beasts that surround them. I won’t spoil some of the action but a sequence with a recurring bird of prey/carrion is extraordinarily recreated and has more implications than the obvious. The people in Andromeda sometimes need to close their eyes to the true troubles and hide away - you can find a present day relevance in some of their actions. The people are lost and rarely speak and many of the cast are searching for what little meaning they can find even in the fallacy of religion/s. 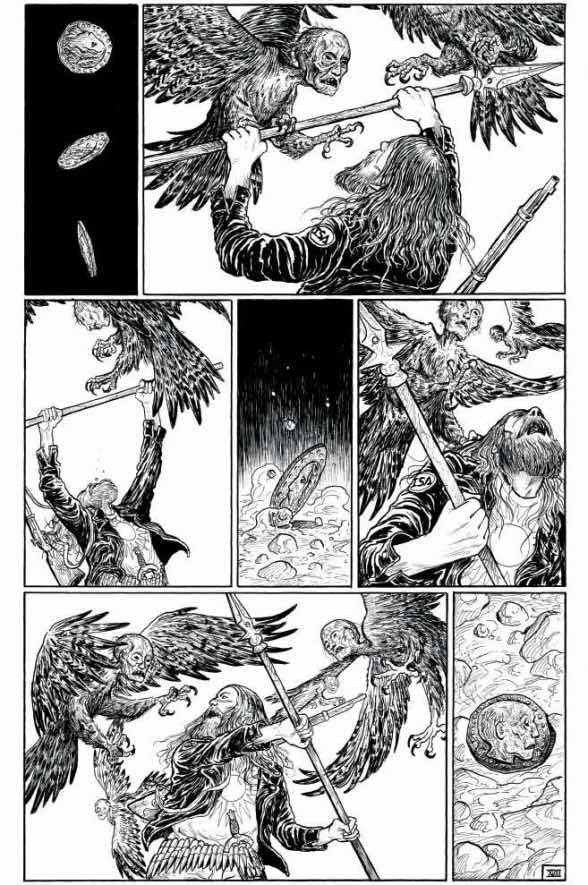 The last theme of this triumphantly complicated morality tale is that of the environment. The world between the covers is a ruin and you know that this has happened because of the stupidity of people we can only refer to honestly as ‘us’. It is not only desolate but also infested with the dead and the rotting. The half dead demons/creatures that roam and attack are because of what we are doing/done to the beauty that surrounds/surrounded us. There is a mighty message hidden here in a fever dream.

This is inky nefarious magic - buy it!

Get you copy here and explore more work by this creator http://www.zeburnay.com/product/andromeda-or-the-long-way-home-hardcover-cd-1You can also follow him on Twitter @Ze_Burnay

Many thanks or reading.